Most people see plastic bottles as disposable, but Hamilton Perkins saw them as an opportunity. The Virginia entrepreneur turned that opportunity into a brand, and it all began with the search for the perfect bag.

“I was looking for a bag I could be proud to carry,” Perkins said. “I couldn’t find it in department stores, I didn’t see it online, so I decided to make it.”

One year ago this month, Perkins began a crowdfunding campaign for his new, Norfolk-based company Hamilton Perkins Collection, which recycles plastic bottles and billboard vinyl into designer travel bags. The campaign surpassed its $10,000 goal in less than a week.

HPC already had hundreds of pre-orders waiting to be filled by the time they were funded. They had six months on their hands to make all of the inventory for the very first time.

Hamilton’s bags are $95 and come in a variety of colors. The bags take 17 and a half bottles to make and are lined with one yard of vinyl from billboards.

After producing and manufacturing the first batches of bags, HPC was here in Richmond competing in the first-ever Virginia Velocity Tour Business Plan Competition for start-up companies. They won for their region, earning a $25,000 grant further pushing HPC toward success. Since then, they’ve also done multiple trunk shows in Bloomington’s in New York City.

Perkins said through the factory in Haiti, the company is able to support about 400 families by creating entrepreneurial income opportunities there.

One of his favorite stories is about a woman in her 60s coming into the landfill to exchange her plastic for money. From the money she received, she was able to buy ingredients to make soup and feed her family. 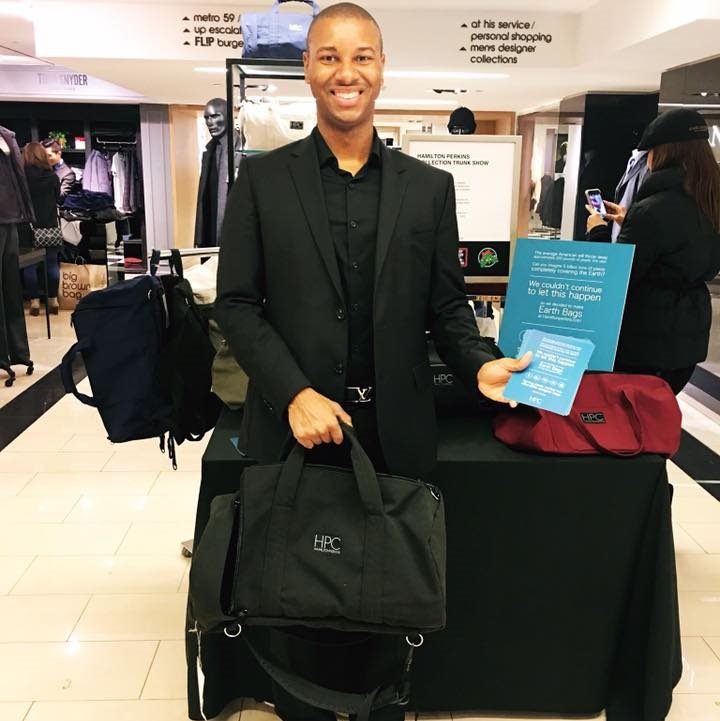 “It’s stories like that right from the start of the supply chain,” Perkins said. “We’re cutting and sewing our bags in Haiti as well. We’re also creating jobs within factories. The factories started with like 20 employees, now they’re at over 150 employees and we’re hoping to expand again.”

Choosing Haiti as the location for the start of the supply chain was easy for Perkins. Working with groups like Thread International and the Clinton Foundation who already had a presence in Haiti, HPC was able to build upon the already established connections.

Welcome to the first mile of our supply chain, the Truitier Landfill. This week we heard the process, we touched the samples, and we held the finished product. We experienced the entire evolution. Learn more at hamiltonperkins.com. Link in bio. #BottlesToBags

Perkins said in today’s time, it’s important for businesses to be mindful of their effect on others.

“We figured if we’re going to start a company now it might make sense to figure out how to make the business the best product with the dye and quality, but also consider social and environmental impact,” Perkins said.

HPC was certified by B Corporation last year, which measures the social and environmental performance, accountability, and transparency of businesses.

Perkins said he didn’t always have an eco-friendly lifestyle, and doesn’t even know if he can claim to truly have one today, but his core values have always been to care about what’s going on.

“I’m just trying to do the right thing,” Perkins said. “Companies can be straightforward with their customers about the process or how they do things and things of that nature. We thought, for us, the best marketing is just to care.”

Although HPC is young, it’s already expanding. The company recently added t-shirts to their store, which recycles about three bottles each, and hopes to continue to expand into a full lifestyle brand one day.

“We’ll produce a couple thousand bags this year and that’s just getting started,” Perkins said. “Bags with a purpose is what we make, and we’d love for people to try it out.”

Published by the local bookstore Chop Suey Books and written by Richmond author Shelley Briggs Callahan, “The House of Life” has just been released today with an event to follow this weekend.
END_OF_DOCUMENT_TOKEN_TO_BE_REPLACED