Harvey Weinstein, the American film producer and former film director has been called “one of the film industry’s most prominent supporters of progressive causes” by the Spectator. Harvey and his brother, Bob Weinstein, cofounded Miramax, an American film company most famous for distributing classic independent films such as Pulp Fiction and Clerks. The Weinsteins have worked with hundreds of aspiring and seasoned actors and actresses over the years. At one point, Harvey seemed to be one of the most powerful men in Hollywood.

That day, two New York Times journalists, Jodi Kantor and Megan Twohey, broke news that gave detailed evidence of Harvey covering up over 20 years of sexual assaults and, according to company officials, at least eight settlements with women who accused him of sexual assault. On October 8, 2017, Harvey Weinstein was terminated from the Weinstein Company, his own brother being on the board who decided Harvey’s fate. “I find myself in a waking nightmare,” stated Bob Weinstein . 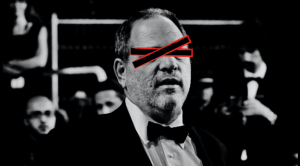 Over 30 women have come forward to speak on their experiences with Weinstein. Even well known actresses such as Angelina Jolie and Gwyneth Paltrow have spoken out against his predatory behavior. According to a story in the New Yorker by Ronan Farrow, “Weinstein has been trailed by rumors of sexual harassment and assault.” The story further states that his behavior was “an open secret” to those within his circles, but that publications have struggled to prove the allegations due to a lack of hard evidence.

So why did this story take so long to break if there was 20 years worth of testimony from women all over the world? Why did the officials who spoke about Weinstein’s cover ups just now decide to speak?

Weinstein is a prime example of how the war on women continues to thrive in the year of 2017. In 2015, the New York Police Department held a sting operation investigating Weinstein’s alleged groping of a Filipina-Italian model, Ambra Battilana Gutierrez. Even with audio evidence of Weinstein admitting the action, Gutierrez lost credibility after her sexual history was brought to light. A police source involved even told The New Yorker’s Farrow, “We had the evidence. It’s a case that made me angrier than I thought possible.”

This is not an uncommon trend in American society. The main questions asked when a woman comes forward about an assault are usually:

“Were you drinking?”
“Were you flirting?”
“What were you wearing?”

In the 2016 Virginia Crime Report, it is stated that there were 5,512 forcible sex offenses reported, and of those 4,760 were female. Given this trend women know all to well, we’re just supposed to assume that 4,760 people in the Commonwealth of Virginia alone were all either too drunk, too flirtatious, or dressed too sexy?

The trend of women being victim-blamed is one that we have seen for years. We are never the victim, always the liar or the whore. The Weinstein case, however, would not have been possible without Hollywood enabling his misogynistic and predatory behavior.

Woody Allen, who has his own accusations in the past (just ask Ronan Farrow), told the BBC, “No one ever came to me or told me horror stories with any real seriousness.” Allen followed this by saying, “And they wouldn’t, because you are not interested in it. You are interested in making your movie.”

With this quote, Allen is essentially describing what it is like to be a woman in today’s society, and more particularly a woman in Hollywood. Nothing you say is of “real seriousness.” You should not expect the men around you to care what happens to you, because they are doing you a favor by making your movie or advancing your career. Hollywood has done an excellent job of exploiting women as objects on and off screen, and therefore it does not seem to have any real plans to stop just because of the Weinstein case.

That does not mean we will tolerate it.

A recent social media campaign encourages those who have been sexually assaulted and harassed to simply write “me too” on their profile and in their newsfeed in order to bring attention to this endemic problem – one which some like to pretends is not even real. Since the campaign started, there have been over six million Facebook posts hashtagged #metoo, with the hashtag also trending on Twitter throughout the day.

While this kind of social media awareness is important when it comes to addressing a nationwide problem, it should be asked why survivors must take to public platforms in the first place? Not to mention outing themselves as victims in order to bring attention to an issue that has plagued our society for generations. 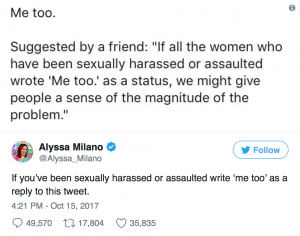 Many heartbreaking stories are captured in Twitter’s 140 characters, speaking about how women had to quit their jobs, or how our very own President triggers them. It is truly devastating to know that millions of women have been abused, while we seemingly do nothing but go further back. Our culture, and how we treat women as a whole, has taken continuous steps backwards for years, despite how anti-feminist rhetoric is used to make us believe otherwise.

Our President was quoted a month before the election talking about women, saying, “grab her by the pussy,” and was still elected. Stanford rapist Brock Turner only served three months in jail for raping an unconscious woman behind a dumpster because “a prison sentence would have a severe impact on him.” Betsy DeVos takes steps to protect rapists by rescinding Title IX guidelines. And President Trump allows employers to deny women birth control. Why then does the Weinstein case surprise us?

It has never been more unsafe to be a woman in today’s society. It almost becomes normal to turn on the television or open up your computer, and see that there is one more reform, one more rollback, one more not guilty verdict, that keeps putting women one step further back.

As a culture, we have done only the bare minimum to make women safe on the streets, in their careers, and even in their own homes. Sure, we can vote, wear whatever we want (kind of), and are able to get an education and a career. But the fight is far from over, and Harvey Weinstein is one of the reasons why we are forced to keep fighting.