We’re back at the Canal Club this Friday night, and as has become the trend with this particular venue over the past year or two, we’re enjoying some catchy emotional pop-punk sounds at an all-ages gig that one wouldn’t be off base to guess will mostly be populated by high school students (OK, and maybe some college kids too). But seriously, if you let that kind of thing run you off, you’ll miss out on a lot of good shit–as has always been true, the kids know what’s up. The word for this show is Neverkept, a brand new name for an established band who originally introduced themselves to the world under the name Count To Four. Shedding the name last year when founding singer/guitarist Mike Hayden was replaced by the duo of Lucas Cote (vocals) and Aaron Mong (guitar), the group still doesn’t have any music available from their current incarnation. However, a new album is in the works, and the group’s sure to have plenty of new music with which to regale fans who’ve come to expect the sort of strong, melodic combination of pop-punk, emo, and hardcore the band has been delivering for years now. 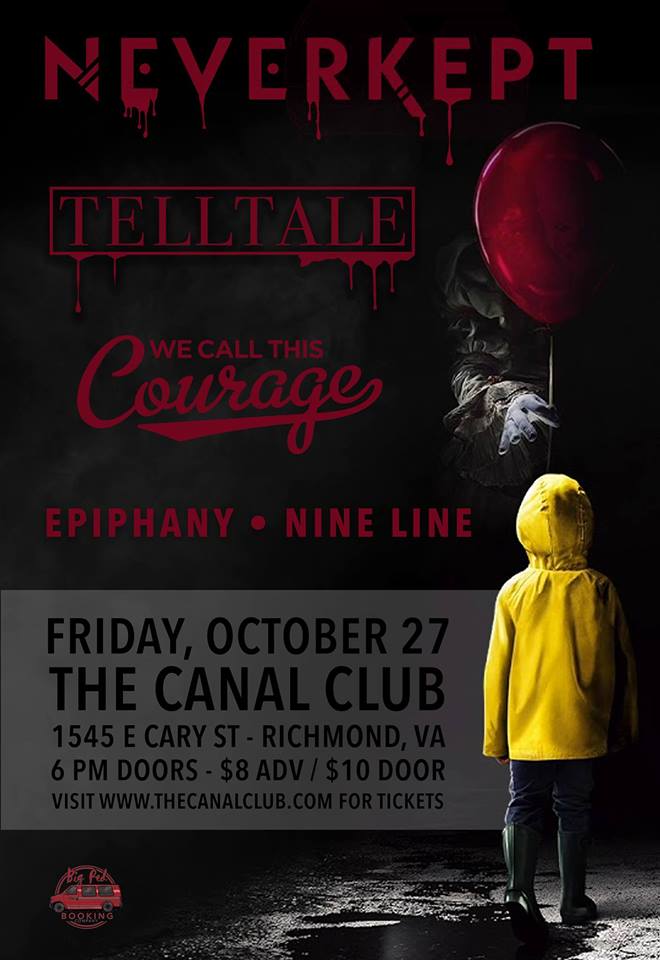 There are plenty of local groups on this bill as well, and the one we should probably mention first is plucky quartet We Call This Courage, who will be bringing a brand new album into the world at this show. Their self-titled six-song EP shows off a dynamite songwriting sense with killer melodies driven by a great deal of youthful energy. It’s what the Canal Club wants, and it’s what the Canal Club will get–never fear. Telltale are a newer local group who’ve just released their debut EP, Good Intentions. These guys are cleancut enough to pass for a boy band, but their lyrics tell a darker story of issues with relationships and substances. So yeah–they’re an emo band. Which is never a bad thing, by any means. Local newbies Nine Line and Epiphany round out this lineup of bands that need to finish up their sets before curfew–expect this one to go quick and feature lots of hyperactive dudes jumping around with guitars. I don’t know about you, but I’m a sucker for that shit.