As we reported yesterday, a Virginia woman was caught on a camera begging for money on the street only to return to what appeared to be a newer model car. The two men filming her accosted her and screamed like hyenas, proud of what seemed to be some personal vindication against public support systems. Nobody came out looking good and it appears the story has become even-sadder.

The woman in the video, identified as Micha Leigh Dominguez, age 40, has been arrested. Not for panhandling or fraud, but for “throwing a missile at a moving vehicle.” 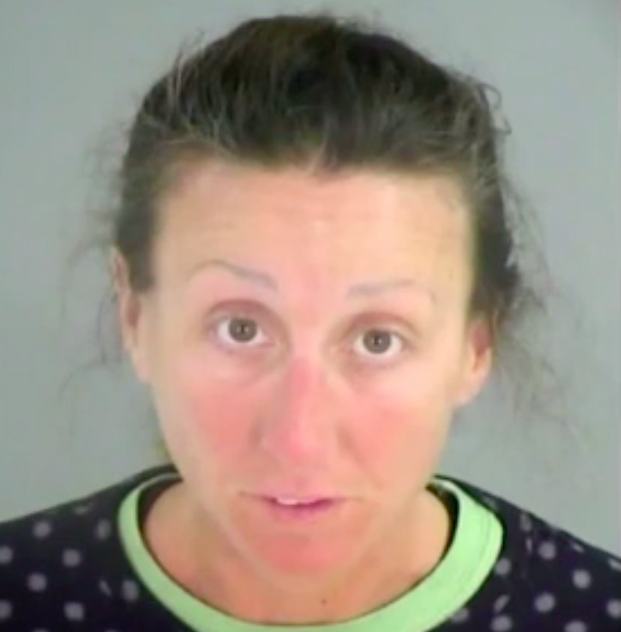 According to Henrico Police, officers were dispatched late afternoon yesterday to the intersection of Gaskins Road and West Broad Street “regarding a disorderly situation.”

Upon arrival the officers located the Dominguez in the parking lot near a local IHOP restaurant. Dominguez said while standing in the median several people began harassing and videotaping her.

While speaking with the Dominguez, the officers were approached by another woman who told them her car had been hit by items thrown by Dominguez while in the parking lot, and that the incident had been videotaped, which was subsequently shared with the officers.

It was determined that Dominguez threw three full Gatorade bottles at the woman’s car, and evidence of where it had struck the vehicle, to include the Gatorade juice itself, was all over the vehicle.

The subject was charged with three counts of “throwing a missile at a moving vehicle” in violation of Virginia Statute 18.2-154, a felony which carries 2-10 years in prison for each count.

Dominguez was held on a secured bond and is currently being held at the Henrico County Jail.

Joan J. Burroughs, RVAMag’s criminal legal advisor (and office neighbor) sighed heavily when she was told it happened in Henrico, acknowledging that wouldn’t help Dominguez’ case, especially if it wasn’t her first offense.

So now we’re putting a woman who quite possibly suffers from mental illness in jail for as much as 30 years. Is this justice?

Below are the details we offered yesterday on how local homeless support networks advise people on panhandling:

Homelessness here in Richmond is a very real thing; a 2013-14 study from HUD put the total number of Richmond and Henrico’s homeless at about 1,000 people a month. The number goes up and down each month and claims each person is only counted once no matter the program they use.

As for panhandling, a 2014 study by Homeward, a nonprofit group that aims to support homeless folks in the Richmond region, found only 10 percent of “homeless” people panhandle. While the group doesn’t actively condemn panhandling, or support local ordinances that ban the practice, it does note that the best way to help the homeless is to volunteer and donate to local support service providers that are directly assisting those in need.

“Professionals working in human and homeless services recognize that all panhandlers are not homeless,” read’s Homeward’s Panhandling FAQ site. “Those who panhandle in our region who are not directly in need of services may see a noticeable decrease in the amount of cash collected from the public. Alternately, our area neighbors that are in crisis will find this reduction in funds from panhandling, along with the outreach approach to the campaign, as a conduit to connect to services.”

In today’s non news, we are in love with this crazy image on the Henrico Police Recruitment page.
END_OF_DOCUMENT_TOKEN_TO_BE_REPLACED