“I hope you all know that I was not in the movie,” Dr. Christine Darden said and a collective chuckle emerged from the crowd. “So, if you want to know about me, you’ve got to read the book.”

Darden, 74, is one of many African American women whose previously un-celebrated work was chronicled in Margot Lee Shetterly’s book, Hidden Figures: The Story of the African-American Women Who Helped Win the Space Race.

Darden began working at NASA in 1967, just two years prior to America getting men on the moon. She worked as a “human computer” without promotion for several years. Darden is one of many women who work in the generally male-dominated STEM (Science, Technology, Engineering, and Mathematics) career field. Though the field is evolving to include more women and people of color, it used to be very male and very white.

“A few times the engineers would put the computers’ names [“computers” like Darden] on the reports that they would write, but it was typically the engineers’ decision to do that or not,” Darden said in a phone interview with RVA Magazine the day before her speaking event. “Lots of times your name didn’t get on a report.”

Darden explained that the engineers were on trajectory to be promoted for their work, while the people who served as computers were in dead end positions. However, Darden loved math and science and she had her sights set on transitioning into becoming an engineer.

“I was a tomboy,” Darden said of her childhood experience. She was more interested in helping her father work on cars or help repair her brother’s broken bicycle than she was in more traditionally feminine things like playing with dolls. Throughout her career she has continued to break through gender (and race) boundaries by becoming one of the first few female aerospace engineers at NASA.

Though she flirted with the idea of being a teacher or a doctor, it was her work at NASA that fed her passion.

It took initiative and persistence on Darden’s part. She had to challenge her superiors and rise to higher levels in the workplace. After being hired by NASA, Darden worked, without promotion, in the same position for several years.

She said that she watched an African American man with the same qualifications as her be promoted. Eventually, Darden spoke with a higher official to challenge the fact that women, especially minority women, were not receiving fair contribution for their work.

It was then that she got her wish and transitioned to being an engineer. She was assigned to a team that worked on sonic boom minimization, a topic she continued to study for the majority of her career and one that she eagerly explained to the crowd of nearly 600 last Friday night at the VCU Academic Learning Commons. 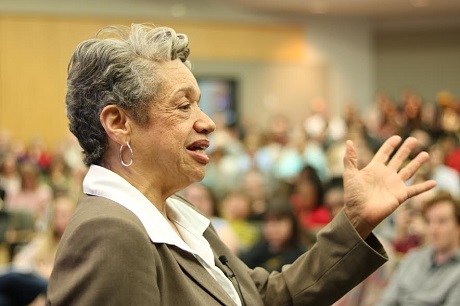 “I have not read the book [Hidden Figures] or seen the movie, but my father works for NASA and he told me about her,” said Annie Maddox 20, who studies marketing at VCU. “She’s awesome, adorable and inspiring. Everything I hoped she would be.”

Meanwhile, Dorothy O. Harris, 86, a retired teacher, said she came out to the packed lecture because she was excited to see a female rise to prominence in the face of such adversity.

“When I saw the movie is when I became aware of her life and the others,” Harris said. “I’m always interested in knowing what’s advancing us as women and as a race.”

Darden cites four words that begin with the letter “P” as her formula for success. She discussed how she first perceives what she wants for herself, then she plans and prepares, and ultimately persists.

She is not alone in her persistence though. As the film and book chronicle, women were making spaces for themselves and demanding fairness.

In fact, one of Darden’s favorite moments in the film is when Mary Jackson addressed the judge to receive permission to take college courses at the nearby all-white school, so that she could balance her existing career and role as a mother while furthering her competency as an employee.

Darden enjoys the fact that the book and film have exposed many people’s contributions to science and the fact that young girls and women can be inspired and encouraged to enter into STEM fields should they wish to do so.

“More and more jobs these days are requiring at least a little bit of a STEM background and they need to be aware of that,” she said.

Darden reflected about how different the film was in places from the book, due to the nature of scriptwriting versus book writing. Certain events’ timelines were compressed and scenes such as Katherine Johnson running through the rain to get to the restroom for African-American employees and Dorothy Vaughn quietly stealing a public library book were added.

“You have to write a script for a movie differently than how you would write a book.” Darden said. “Dorothy Vaughn’s granddaughter said that she never stole a library book. I guess they did that to make the movie more interesting.”

Darden has since retired from NASA, but she’s not staying idle. Now living in Hampton Roads, she’ll still take on contract work with the operations along the coast. She also volunteers with churches and gives speeches to students, such as this one at VCU.

Looking forward, she is as excited about the impact and results of her job as she is about the actual application of math and science. Darden waxed poetic about what her sonic boom research may mean for transportation.

Presently laws state that supersonic planes cannot fly over land, but Darden feels her team’s research and an investment in construction of a capable plane with a reduction to sonic boom may one day make it possible for people to fly from the east coast to California in about an hour.