Monroe Park saw its official reopening ceremony last Thursday following months of renovation. The fairly rainy event was attended by Mayor Levar Stoney and representatives from Virginia Commonwealth University, the Monroe Park Conservancy, Richmond City Council, along with a crowd of dozens — and one lone critic of the entire affair.

“Virginia Beach built a $29 million facility to help house homeless people. The city here does nothing,” said Thomas Alleman, chief facilitator of the Richmond chapter of the international Food Not Bombs collective.

Carrying a protest banner soaked from the rainwater that poured during the ceremony’s speeches and ribbon-cutting, Alleman was very critical of the event, the park redesign, its architects, and how it spoke, in his view, to the continuous changes Richmond has seen over the years.

It’s changing all right — but for what and for who?

Nearly two years after work on the park closed off a well-known hub for Richmond’s homeless and the organizations that aim to aid them, the way homeless outreach has changed in the city and Virginia is a question with a wide gulf of responses for groups that share a common cause and focus on this issue.

For Michael Rogers, a former member of CARITAS and Community Engagement Manager for Homeward, the current state of homeless outreach is a very positive one. Aided by staff tasked to connect with, check in on, inform and build relationships with the homeless, the group’s efforts have continued with little obstacles to hinder them.

This is important for the work they do, especially the annual Point-In-Time count, as Homeward’s ability to document the homeless people of the Commonwealth is critical to ensuring federal funding from the U.S. Department of Housing and Urban Development (HUD). As such, the work the group does involves not just networking with similar organizations throughout Virginia, but broad cooperation with local officials and law enforcement agencies to ensure proper support for all of Virginia’s homeless people. 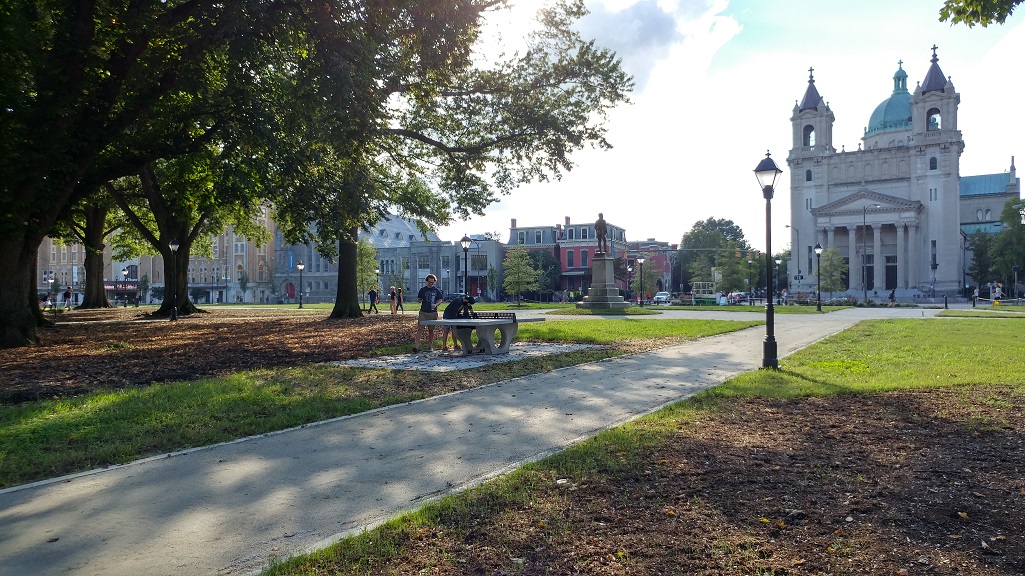 “It’s grown a lot, but we’re getting participation across sectors and across organizations,” Rogers said of Homeward’s recent efforts.

Alleman has a more mixed take, owing in part to the disruption in service and outreach Food Not Bombs experienced following the park’s closing. As a result, after 25 years in the city, the group was faced with the hard work of reestablishing their organizing connections with a homeless population left scattered. Eventually, Food Not Bombs set up in Jackson Ward’s Abner Clay Park, with the help of Richmond’s homeless, though with a noticeable decrease in numbers.

This skeptical view of the situation extends to the renewed presence of law enforcement in the area, including the Richmond and VCU police officers stationed at the Checkers House near the park’s center, in addition to the new camera system. Ultimately, Alleman disputes the notion that Monroe Park is for Richmond’s city residents.

“They put a police station where this gazebo and bathrooms used to be. What does that really say? Instead of helping us and working with us to help these people, they do things like this, I think, to kind of dissuade us,” Alleman said.

In a statement, RPD 4th Precinct Officer Lt. James Roberts explained that the Richmond Police Department will be covering primary patrolling responsibilities in the park, with VCU’s police officers serving as support.

“The objective of the Richmond Police Department is to implement public safety strategies that will allow all park patrons to lawfully utilize the park,” Roberts said. “Enforcement action will be taken when appropriate, however, our overall strategy is to engage the community and our partner organizations in non-enforcement efforts to ensure all lawful activity is protected.”

“Homeless outreach groups will continue to be welcome in Monroe Park as they are in other city parks, as long as their activities are lawful.” 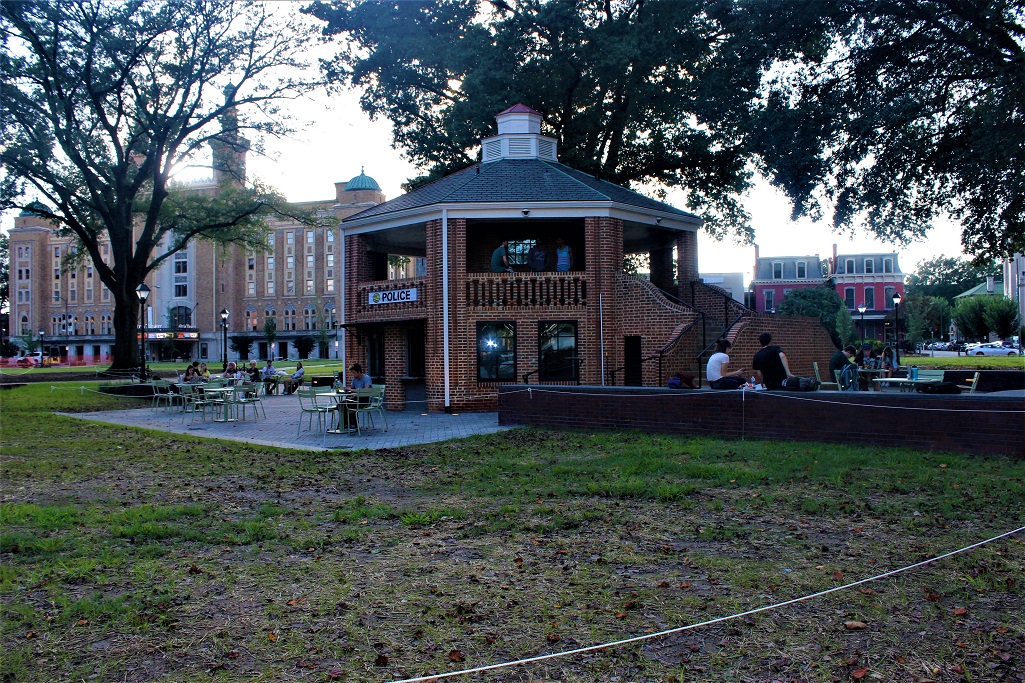 In contrast to Food Not Bombs’ struggles, Homeward was seemingly well prepared when news of Monroe Park’s closing reached them. Though Rogers was still part of CARITAS at the time, the usage of a coordinated communication plans for a network of case managers for emergency shelters, outreach workers, and law enforcement on alternative locations for shelter and aid helped some homeless outreach groups immensely in the time before and during Monroe Park’s closure.

This continued good fortune extends to Homeward’s interactions with HUD. In contrast to general operations and policy initiatives within the Trump administration and even from top HUD officials, Homeward’s work with the staff members of its homeless division is as professional as ever, if not better, according to Rogers. With applications for a $5.4 million federal grant and additional funds for homeless domestic violence survivors still pending, that relationship will be key for how Homeward operates in the future.

“I can’t speak for all of HUD, but in homeless services, it’s remained consistent, and we’ve even seen an increase in support,” Rogers said.

That support seems especially vital in a fall season that’s seen extreme and rare weather occurrences touch down in Richmond, including tornadoes generated in Hurricane Florence’s wake that claimed the lives of two people in Virginia.

Homeward opted to tackle the problem with a system of public communication, online resources and overtime work to bring the public into greater connection with both the city’s homeless and the kind of outreach work necessary when a potential hurricane could reach its streets.

Recalling the large amount of effort taken to ensure the safety of Richmond’s homeless people, Rogers said, “It was just kind of working diligently to make sure that everyone, including the general public, knew what resources were available; so that anyone who was sleeping outdoors, we could connect with them and offer those kind of services.”

On this topic, Alleman strikes a similar, more condensed tone: “Even if there was a tornado, we would still be here. We are dedicated.” 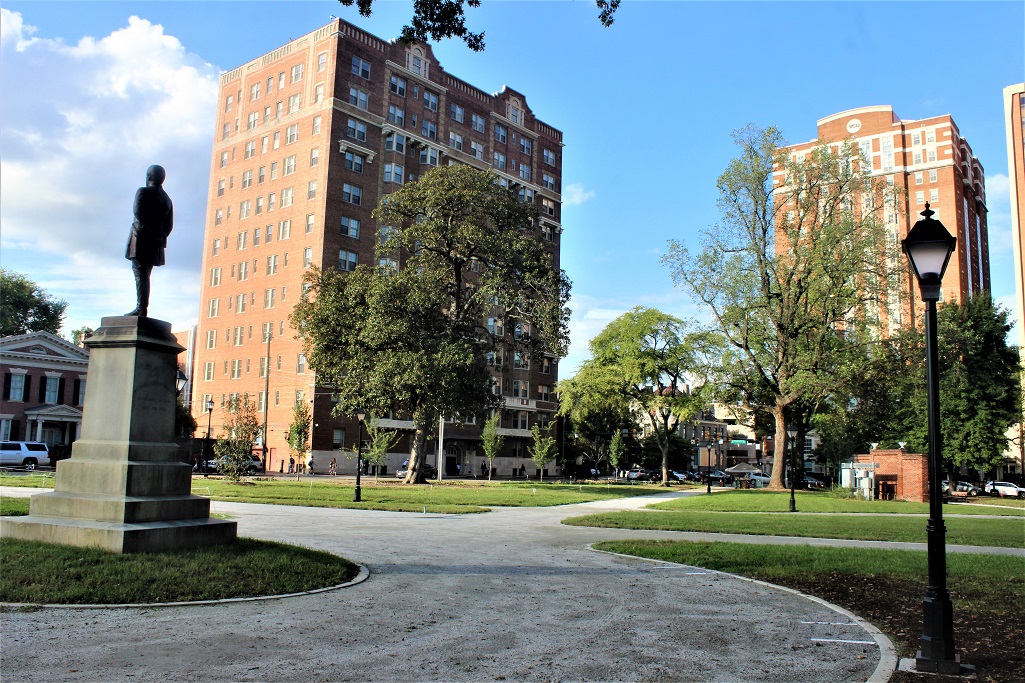 Judging by Alleman’s and Rogers’s statements, both organizations are still undecided on how they’ll utilize Monroe Park as part of their efforts, now that fences have come down.

Rogers and Homeward remain observant, waiting to get the full scope of the new rules and guidelines for the park, which includes a 6 o’clock closing time and new rules for lawn reservations and charitable food distribution. For now, they’re focused on connecting and expanding the capacity to aid.

“We will support and push people towards creating and expanding indoor meal programs, particularly for people who are sleeping outdoors,” Rogers said.

And for Food Not Bombs, who are deep in discussion among themselves and other groups? “We still want our presence in this park,” Alleman said. “It’s not like Food Not Bombs is just this bunch of punk kids making food. It’s the idea that we have to show people that there are other people in this city that need help.”

Despite his misgivings about the park, Alleman remains open to the possibility of greater homeless aid coming from Richmond officials.

“I do hope that we can work out something with the city to get people into some sort of shelters,” Alleman said.

While the gap in Alleman’s and Rogers’s outlook on Monroe Park is clear, equally clear is that both men — and the groups they work with — remain steadfast in their commitment to helping Richmond’s homeless.