While most kids only get to visit the circus once a year, one high-flying man grew up living and breathing it, which would shape his daring, life-long career.

David “The Bullet” Smith, Jr. has been shooting himself from the family cannon about 300 times per year for 21 years, and will do so at the Flying Squirrels baseball game this Thursday.

His human cannonball act follows a tradition begun by his father, who started the family business before Smith was born. A true circus aficionado, Smith said he wouldn’t want to do anything else.

“I have to be where all that fear is gone. No time to think about it. You react, you got to fly for a second, and be ready for something that is very intense,” Smith said. “I try to keep it where it’s challenging. It keeps me on point, let’s me know I’m doing the best that I can, and entertains the crowd. I’m giving them the best show I can give.”

Although the family had a home in Oregon, with plenty practice room for their cannonball act, Smith was born on the road and spent much of his life traveling with his trapeze-artist parents from city to city.

Smith, 40, has performed in 15 countries and been to nearly every U.S. city performing around 7,000 shows, on average exerting 10 units of g-force at every takeoff and breaking four world records, which had previously been set by his father.

David Smith Sr. was a human cannonball for almost 50 years, first performing as a trapeze artist with his wife after receiving an unusual offer from an old friend.

“One of my dad’s best friends from college who competed in gymnastics called him up,” Smith said. “Three days later my mom and my dad sold everything they owned and hit the road.”

In 1976, Smith’s parents won the Circus World Championship in London while performing for the Queen as the “Rock Smith Flyers,” and performed again in 1977 while his mother was pregnant. It was after this that his father decided to become a human cannonball, beginning a family tradition that has collectively lasted almost 70 years.

Although Smith, Jr. had been shot from the cannon at home twice when he was 17, he didn’t start his own performance career until two years later. 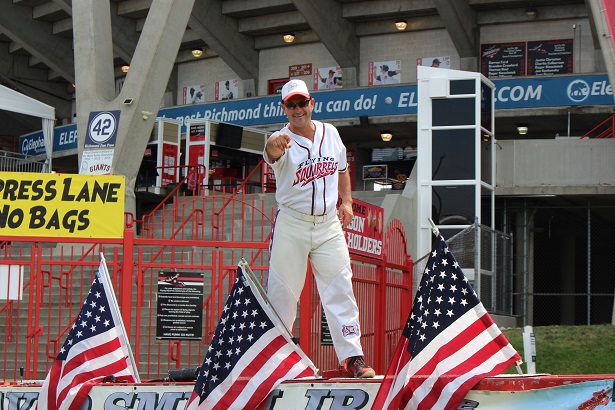 “When I was 19, my dad called me up and was like, ‘Hey, son, I hurt my back. I need you to do some cannon shots for us.’ And that’s what I did. Three days later I shot out of the cannon in Madison, WI,” Smith said.

His first shot in a show was 85 feet long, which Smith said was, “pretty pathetic.”

However, he has since set world records both for distance at 198 feet 8.8 inches as well as height, a total of 85 feet 4 inches, which he achieved on the set of “Guinness World Records Unleashed.”

Unfortunately, his career has not come at physical costs. While Smith takes measures to prevent himself from injury, such as a consistent workout routine to ensure his body is warmed up before performing, being a human cannonball can be dangerous.

“I’ve hurt pretty much everything. It’s a very physical thing to do,” he said. “You need to have the capacity to be flexible and strong at a very high speed. You have to be physical enough and flexible enough to end up in whatever position you end up in when you are at your full stopping weight.”

After being shot from the cannon, Smith lands in a large net. Though he has never missed the net, the force with which he lands can be challenging for his body.

“I just make sure that everything that might have to take a hit, or take an impact, or take pressure, is ready to do that. So I am at a full sweat before I ever get in that cannon. I try to be at the point where you’re just pumped.”

Of course after 21 years, Smith has become accustomed to absorbing this type of force and only continues to increase his physical stamina. 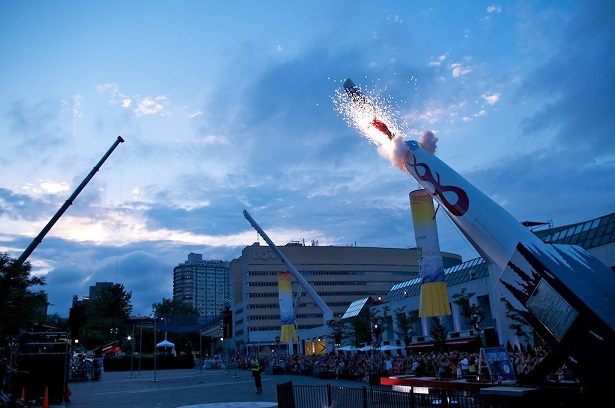 “The cannon adapts your body. My body would be nowhere near as strong as it is now if I weren’t a human cannonball,” he said.

Although the family recipe for a perfect human cannonball shot is under lockdown, Smith does reveal that everything is calculated in advance with painstaking measurements. He must take into account not only his own weight and height, but also the sun, wind, temperature, time of day and location.

While his calculations are incredibly exact, he can’t always anticipate every adjustment needed, as the weather often has its own agenda.

“One time it was windy when I got in the barrel and the wind hit while I was in there. It whooshed, I was like ‘What was that? Alright, let’s go.’ I came out and I was so close to the side [of the net], and it cost me my left knee. I taped it up, taped sticks to it, duct taped it for [cannon] shots, and I didn’t miss shows. We don’t miss the shows.”

Smith has performed four shows for the royal family in England, been featured during Nickelodeon’s Kid’s Choice Awards, performed at the Sultan’s Festival in Oman, and was even a stunt double for Ewan McGregor in Tim Burton’s film, “Big Fish.”

Yet with all his fame, his priorities rest with his family–both his own blood family and the family he’s made along the road.

“My kids are with me on tour, the three little ones. They wake up, kick open the front door and go, ‘Oh cool! We’re at a baseball game!’ They love it,” Smith said.

Although Smith has a home in Florida, he and his family spend most of their time on the road, as Smith did with his parents. Along the road, he has been able to create a community with other people in the industry that ensure the shows continue, as well as create a home both for Smith and his children.

“I have these great wonderful relationships with all the old-time guys,” he said. “We’ve been pretty well blessed to be keep going back to wonderful places.”

And every now and then, he returns to perform with the circus.

Be sure to visit The Diamond at 3001 N Boulevard at 5:30 p.m. to see Dave “The Bullet” Smith perform his act as well as watch the Squirrels take on New Hampshire. For more details or information about tickets, visit the Flying Squirrels website.