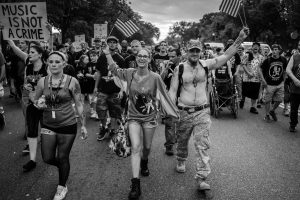 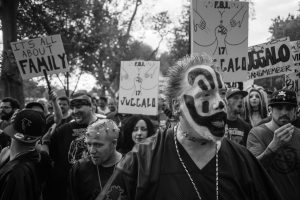 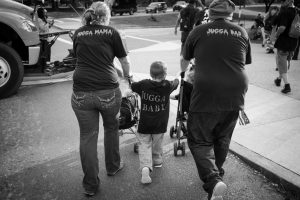 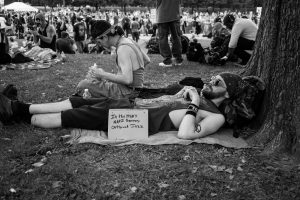 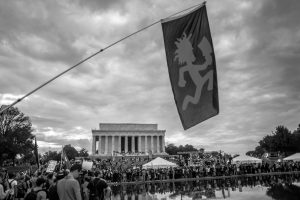 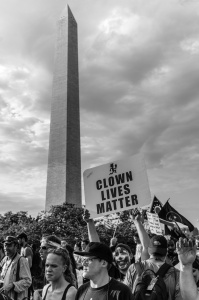 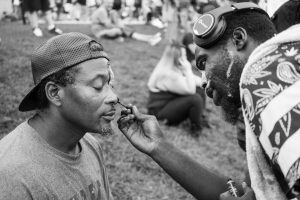 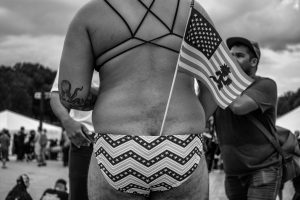 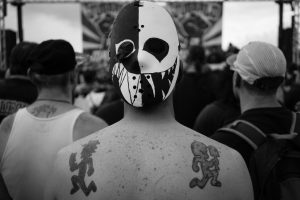 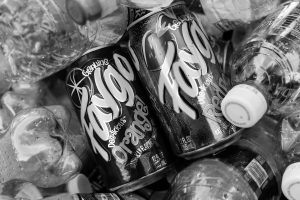 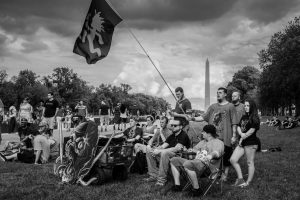 Out of the weirdest days experienced, this one probably topped the list.

This past Saturday, while Richmond had its own win against white supremacy, the strangest conglomeration of rallies simultaneously converged on the National Mall in Washington, D.C.

On the East End, just past the Washington Monument, Trump supporters assembled at the “Mother of All Rallies,” a group supporting “America, freedom, and patriotism,” according to their Facebook page. It turned out to be the baby of all rallies, as no more than a couple hundred people gathered, filling only about a quarter of the large space allotted on the East Lawn of the Mall.

“It’s just to show that we’re still here, that people really do like true, traditional American values,” said Christopher Greeley-Hermida, a Floridian and living historian. “It’s not just about Trump. When Trump came into office, he gave us enough confidence to get together.”

Country music blasted from the stage between speakers as protesters wore red, white, and blue, carried Trump signs, flags and buttons. A few counter-protesters were scattered throughout the crowd, and a small group of ANTIFA appeared on the sidelines. When any threat of misconduct developed between the two groups, a group of unarmed, nonpartisan militiamen barricaded themselves around the counter-protesters to prevent any conflict. Washington DC Park Police were also present.

“[Today] has been a mixed bag,” said Yve, a member of ANTIFA who preferred to use only her first name, of the Trump supporters. “One of the [militiamen] came over and had a really civil conversation about ideologies and really what’s at the root of both of our mentalities, and determined that we’re essentially on the same side.”

The rally lasted the entire day and featured speakers like Bruce Nathan, a Florida gubernatorial candidate on the Republican ticket, Christian radio host and singer Monica Matthews, and Marco Gutierrez, found of Latinos for Trump. Representatives from Gays for Trump and Bikers for Trump were also present.

“The problem isn’t Trump, the problem is the Republican party isn’t moving at his pace,” said Dave Delp, who claims to be frustrated that Congress has not been more supportive of Trump’s policies. “The Republicans haven’t been standing behind him, and that’s basically what we’re upset about.”

The majority of patrons were individual Trump supporters without any white nationalist group association; However, the Proud Boys, a national alt-right fraternal organization, did attend the rally. The Proud Boys, a group founded in 2016 by former Vice Magazine co-owner Gavin McInnes, also participated in the Unite the Right rally in Charlottesville on August 12.

Although many spirited, contentious arguments broke out over the course of the day, the rally was a peaceful one, and both Trump supporters and counter-protesters actively engaged in political conversations with each other. Although the two sides didn’t quite see eye-to-eye, it was a refreshing contrast to the behavior exhibited at the white supremacist rallies held over the summer throughout the country.

Nonetheless, on the other end of the Mall at the Lincoln Memorial, a very different event featured a massive turn-out from a small part of American subculture. Fans of the Insane Clown Posse (ICP), a Detroit-based hip-hop duo, who call themselves Juggalos held a march protesting the FBI’s 2011 classification of Juggalos as a “loosely organized hybrid gang.”

And between these two events, one bride lived out every woman’s dream as she was married on the National Mall with a Trump rally to her right and a Juggalo march to her left. The perfect way to start a marriage.

Despite huge Internet circulation of the march, which was seen as a joke by many Facebook users, in reality this clown gathering was no laughing matter. Many Juggalos are negatively affected by the FBI’s label, and having a Juggalo-related tattoo or wearing an ICP t-shirt is reason enough for a police officer to permanently mark these horrorcore hip-hop fans as “gang-affiliated.”

“With being a person of color, I’ve already got a big target on my back,” said Richard Williams, a Juggalo from Oakwood, CA. “But now with this whole gang thing, just with me being black and just wearing an ICP jersey or a t-shirt, I’m targeted even more by the police. Just walking down the street, I’ve been stopped by the police. I’ve been asked questions, I’ve had my tattoos taken photos of, asking me questions about the ICP and Juggalos, who our ‘leader’ is and everything, and I’m like, ‘I’m not a gangbanger dude, I’m going to work.’”

According to several testimonies from those who attended the march, these labels have caused fans to be fired from their jobs, lose adoption rights, and kept them from enlisting in the military. They claim the label has also led to discrimination from police officers as well as non-Juggalos.

“I’ve made many mistakes, but being in a gang isn’t one of them because I’m not a gang member,” Laura King said, a speaker at the Juggalo march. “I’m a Juggalo.”

King received a DUI and was put on probation. The first six months of this probation went routinely; However, after one of her normal check-ins, an officer reported King had a gang tattoo on the back of her neck. Although King obtained her Juggalo-themed tattoo five years before Juggalos were labeled as a gang, having the tattoo gave police grounds to officially identify her as a gang member. Several severe stipulations were added to her probation, such as random house inspections regardless if King were present.

“The treatment from the FBI and the powers that be is unfair to Juggalos,” said Williams. “If it’s starting with us, just as music fans, who could be next? Could members of the Kiss Army be next? Could fans of Beyoncé be next? This is a pure example of our rights slowly being stripped away.”

While seeing such a large gathering of the “Dark Circus” was a first for many, the Juggalos proved themselves to be exactly what they claim: a laid back, free spirited group of music fans who are unapologetically themselves, without the judgement of others. The stark contrast between one end of the Mall and the other was palpable as over 1,500 Juggalos joined together as a family to peacefully protest and listen to music. ‘Family’ was a word heard over and over throughout the day.

“It makes me feel very prideful to be a Juggalo,” said Big Baby Sweets, who traveled from Cleveland, Ohio and goes by her Juggalo nickname. “I got into it when I was really young in school, and it was a real family thing for me because I was a Juggalo, my sister was a Juggalo, my brother, my cousins. You go to concerts and that’s how it starts.”

Fans were most excited when Violent J and Shaggy 2 Dope, the men of ICP, arrived to speak and performed later that evening. “We’re the good guys here today,” Violent J said. “We’re actually in the right this time!”

The crowd often chanted, “You fucked up” when a speaker made a blunder, or “Fuck that shit” anytime the FBI was mentioned. Their favorite chant was simply, “Family,” since above all, Juggalos consider themselves one giant, oddball family.

Just another day of free speech in the Nation’s capital.