Every Friday night, RVA Mag brings you an A-plus can’t-miss playlist curated by Virginia’s most influential artists, musicians, and institutions.

This one comes to us courtesy of Rumput, a delightful Richmond-based ensemble that combines the classic string-band traditions of early 20th century American music with folk music traditions of Indonesia, mainly focusing on keroncong — traditional Indonesian string-band music. Regularly working with Indonesian musicians, both locally and abroad, the dozen-plus member ensemble incorporates a variety of Indonesian instruments, as well as shadow theater, into their multimedia performances.

Rumput has been quite active in the Richmond area recently, and even performed with Indonesian master musicians Endah Laras (vocals) and Danis Sugiyanto (violin) at the Smithsonian earlier this month. They’ll accompany Laras and Sugiyanto again for a performance of keroncong classics at this weekend’s Richmond Folk Festival on Brown’s Island. Their set will take place at 3:15 PM on Sunday, October 13 on the CarMax Family Stage (more info here). If you’re not familiar with Rumput as yet, it’s a great opportunity to expand your musical horizons and enjoy some excellent string-band sounds. Plus, admission is free!

Before that, though, take a listen to the excellent sounds this extensive ensemble have assembled for us all. Featuring not only blues, jazz, and folk sounds from the United States but plenty of traditional sounds from all over the world and even a few modern sounds by contemporary artists, the playlist offers an excellent preview of the many varied influences Rumput draw from in order to create their multi-cultural sound.

“Our playlist is based on songs we’ve played, artists we’ve collaborated with and/or been inspired by, music we’ve encountered while touring Java, and music we’ve turned each other onto while touring regionally,” states the group. “Also, Western songs that stretch time like the Indonesian musics we love.”

Stretch into it, Virginia.

On Richmond’s community Gamelan Raga Kusuma’s (GRK for short) first night in their new rehearsal space, members had to wipe their hands of potluck dinner crumbs before the ensemble began to practice for their 10th anniversary performance, which is coming up next month at the Grace Street Theater. The group was comfortable — laughter shot out between songs and a few of the members’ children played off to the side — but their preparation was precise. 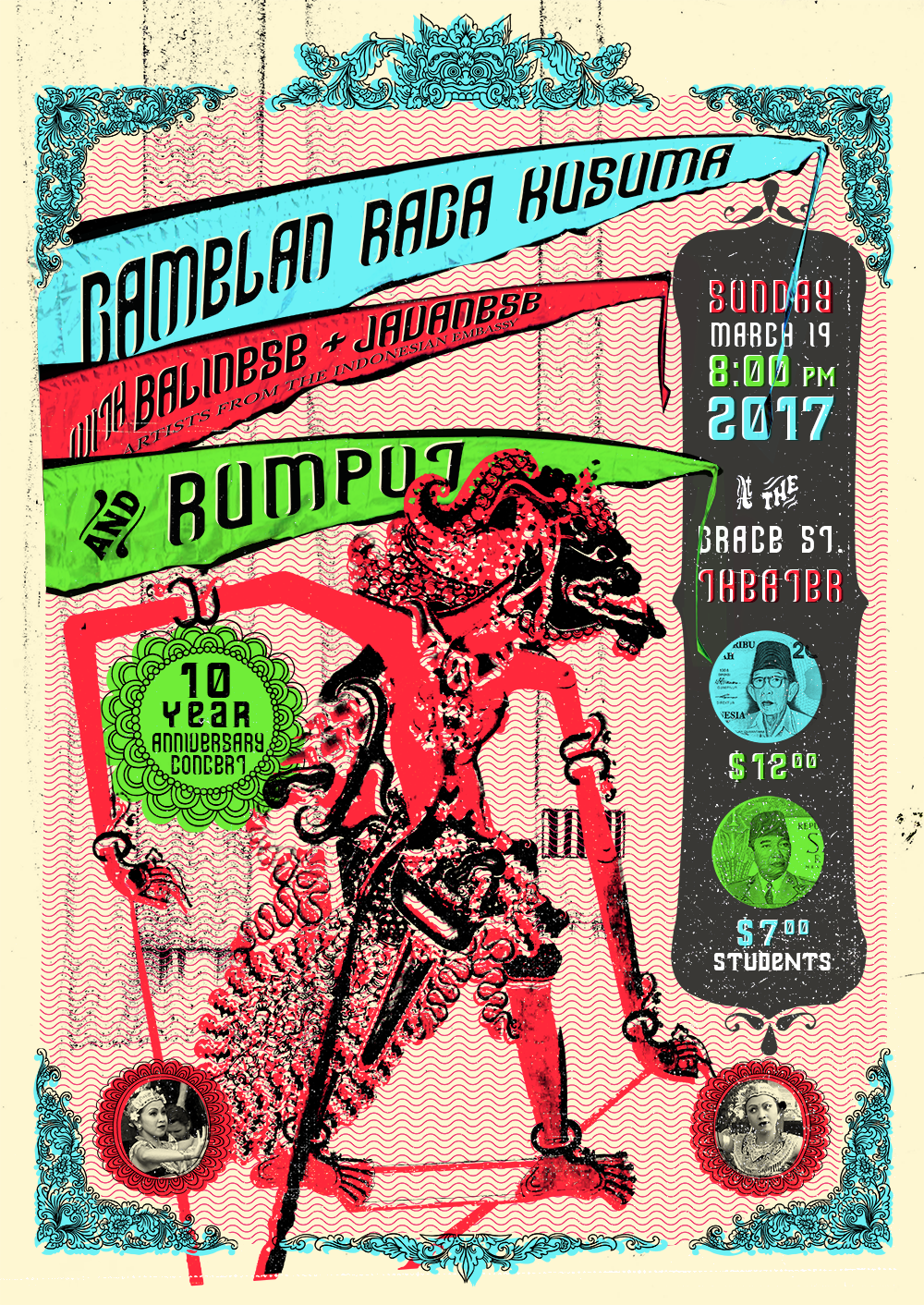 Sat between rows of traditional Indonesian instruments, the players’ bodies were an afterthought in comparison to the images that blaze out from the instruments’ wooden cases: carved reliefs of the ancient Indic epic poem, Ramayana.

Gamelan describes the entire body of instruments, made up mostly of percussion instruments like xylophones, cymbals and gongs, that make up one group. On the night of their anniversary performance, GRK will play songs with their Balinese and Javanese gamelan sets, as well as songs from the collective’s keroncong [an Indonesian string band; pronounced krawn-chong] ensemble, all while accompanied by traditional dancers and special guest musicians from the Indonesian Embassy itself.

Andy McGraw, the founder of Richmond’s community Gamelan Raga Kusuma (GRK) and an associate professor of music at the University of Richmond, discovered his love of gamelan after a house trade in Singapore became a hitchhike through Sumatra, then Java, ending in Bali.

Since then, McGraw has played with gamelan groups from Bali to Boston, and during his graduate school study of anthromusicology [anthropology + music], he focused his dissertation on Indonesian music.

Gamelan is deeply significant to Indonesian culture, having historically been played to activate temples and open the lines of communication between humans and gods. With such a rich legacy to explore, McGraw’s knowledge, experience and connections with native players help bring the spirit of this music to life.

“All the instruments have to be made together, all the bronze has to be poured [and tuned] together for it to sound right…and [each set is] given a lot of the life cycle rituals that humans are in Bali and in Java,” said McGraw. “The keys, when they’re first forged, aren’t allowed to touch the ground, babies aren’t allowed to touch the ground…you don’t step over people, and so you don’t step over the instruments.”

Feelings of warmth and ease pervade the GRK, and create a seamless transition between work and play. It seems natural that McGraw’s own son–when he is not sneaking powdered donuts from potluck tables– has occasionally played the gong alongside Hannah Standiford, the lead singer of the keroncong group Rumput who has been a featured performer on one of Indonesia’s most popular talk shows, Kick Andy. http://www.kickandy.com/ https://www.youtube.com/watch?v=LEIiqNhu558&t=198s

Standiford played with GRK before going to study music in Indonesia herself, where she practiced Javanese gamelan at university by day, and keroncong at local rehearsals by night.

Gamelan/Indian Music and Dance at the Hindu Center of Virginia

“I had just heard recordings [of gamelan] in a contemporary music class at VCU, because supposedly they’d inspired Debussy,” said Standiford. She’s referring to Claude Debussy, one of the most influential French composers of all time. “It was just a total palate cleanser…when I came back [from Indonesia], I immediately joined GRK again and started Rumput.”

A mix of experience levels and backgrounds in GRK makes good on gamelan’s backbone: unity in the community.

“Typically, people start playing [very young], and then if they have the time and the interest, they move slowly forward through the parts,” said McGraw. “And then if they get busy or rheumatic…they move backwards again. So, it’s kind of designed to accommodate the kind of random sampling of people you find in any neighborhood.”

“Some [members] play in four to five bands, some teach music, while for others it is their first musical experience,” said Vlad Cuiujuclu, a musician and member of the GRK with no previous background in Indonesian music. “Regardless, everyone feels like they are welcome.”