Are you feeling suffocated by the Trump presidency? Does the thought of another two years of Alice in Wonderland political depravity leave you breathless?

Papa Roach may be the anodyne you’re looking for, more so since the nu-metal luminaries are kicking off a month-long tour starting tonight at The National in Richmond.

What they might be best known for recently is their viral trolling of President Trump, which has been a welcome development for a band who’s career has been subject to intense scrutiny for the better part of two decades. Most notably, the band mimicked President Trump’s childish, all-caps threat against Iran using lyrics from their 2000 mega-hit “Last Resort.” 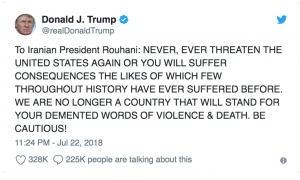 For those who are not hard-wired into the world of international relations, the U.S. has been in a tense stand off with the Islamic Republic since they over-ran the U.S. Embassy in 1979 during the Islamic Revolution. Therefore, Trump’s tweet rage should come as no surprise; this bumptious outburst was in response to a speech given by Iranian President Hassan Rouhani in July, 2018. Rouhani was quoted as saying, “Do not play with the lion’s tail or else you will regret it,” referring to U.S. efforts to sanction crude oil exports after leaving the Joint Comprehensive Plan of Action or simply “the Iran nuclear deal” – a signature landmark of Obama-era foreign policy. “Peace with Iran would be the mother of all peace, war with Iran would be the mother of all wars,” said Rouhani later in the speech.

Irrespective of Trump tweets, the intricacies of diplomacy in the conflict-prone Middle East is always complex, leading Papa Roach to weigh with a nuanced response which was surely debated in the halls of each government (and possibly the U.N.); using “Last Resort” to make their point. 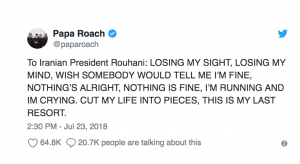 Papa Roach also joined in the fun after a doctored New York Times article reimagined Paul Ryan listening to “Last Resort” in his SUV after a workout. The band later tweeted a photo of Paul Ryan lifting weights and wearing a Papa Roach shirt with caption, “#RoachGate,” after a joke tweet about Paul Ryan blasting “Last Resort” as he drove away once his healthcare bill failed. 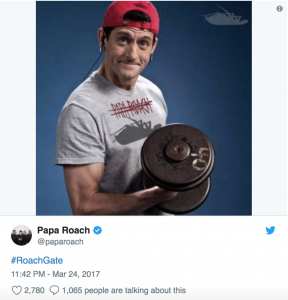 The cutting my life into pieces did not stop there, however, with the band re-tweeting Kavanaugh inspired memes. 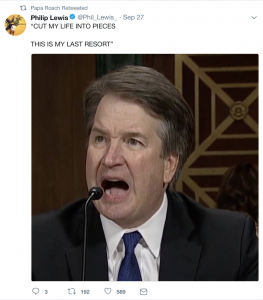 The moral of this story? While Papa Roach might not be your bag, their epic trolling of the Republican establishment proves that even the nu-metal bands of the  90s and 00s can still get down with the movement. Bless.