Whenever a musician steps outside of his/her comfort zone and away from their regular gig to pursue another project it’s always exciting to hear what they come up with. For local musician Steven Boone, fans will get to hear what he’s been working hard on the last few years on Friday when he drops his debut solo album, SoulLow.

Boone has been playing in bands since he was a teenager and currently plays lead guitar in local bands Dance Candy, Sam Reed Syndicate and Stone Brook Moonshine, and he said this album, produced by RVA’s one and only DJ Harrison, will be much different from what people are used to.

“For me, it’s a different side than what people might have seen me play around town, they know me as a guitar player {rather} than a singer songwriter,” he said. “Essentially, this album is a big huge mirror and it’s been a while that I’ve been the focus of any kind of project, I’ve gotten settled into being a side man in different bands.”

The Shockoe Sessions – Steven Boone – The Love That Got Away from Artesian Entertainment Group, LL on Vimeo.

A stripped away, soulful, bares-all approach, Boone worked with DJ Harrison (Devonne Harris) and many other fellow RVA musicians to create this personal, emotional 14-track record that’s one of love, loss and personal journey.

The album addresses issues anyone in their 20s and up would have experienced according to Boone.

“Decisions” for example, is a song off the album that Boone wrote his senior year in high school which delves into preparing for life in the real world.

The track “Maryann” is dedicated to the mom of a good friend of Boone’s who committed suicide. The end result is a very sweet, but light-hearted message with a cheery beat.

“His mom, she was like the cool mom, she had him when she was 16 so her whole life was him so I wrote a song called Maryann which is her name,” he said. “The thing about that song that I really like is I took the negative energy from that situation and spun It into a positive uplifting song.”

“If I Could” is a pure love song and its beautiful. Very John Mayer vibe. Actually, most of the record has a very similar sound to Mayer. Well, except for “Real Love”, (Bonus track not on the album, see below!!) which has a MUCH more funky/jazzy vibe and I’m digging it!

SoulLow has been a long time coming for Boone. Harris, of Jellowstone Records fame, said the two started working on around 2012 or 2013.

“This is the project that has taken the longest to complete from start to finish,” Harris said. “Between his career and my career, and everyone going through different things in their lives it’s taken a long, long time.”

This will be the two’s first official collaboration on a project, but Harris and Boone have played music together since they were teenagers.

“We were always playing in bands together and writing songs together, but it wasn’t anything that was really official,” he said. “After a while he started coming by and recording his own songs and I was like, ‘you should be out here with your band playing your own songs.’”

And most of the time, until they wrapped up the album in 2015, it was just the two of them recording at Jellowstone.

“He would either come by with a bunch of lyrics and sing me the lyrics and show me the vibe of the song, and I would go and record it and then he would come back and finish the guitar part and the song over top, or he would come in and do the same thing with the guitar and vocals and I would just record his guitar and vocals at the same time and do the track from there,” Harris said. 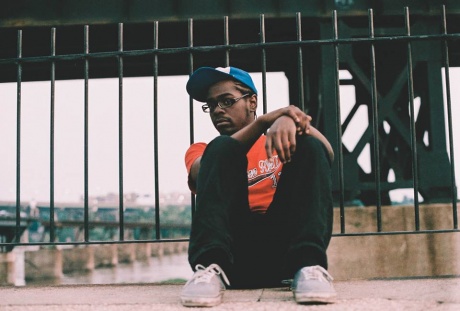 Harris, who had just finished up his Sly Stone tribute project Slyish last time RVA Mag chatted with him, said like Boone, this project was a little something different from what he usually does as well.

“Everyone knows me as a hip hop/funk or soul producer, if you look at the Jellowstone catalog you can kind of see what my forte is, which is fine, but I don’t wanna be known for only doing that,” he said.

Broadening his type of work, combined with wanting to get Boone’s voice heard were the two reasons the well-known RVA producer said he wanted to take on the project.

“Those were his songs and his lyrics, but he’d never really had anybody to expand on that,” Harris said. I’ve known Steven for a long time and I know he has a bunch of talent and I know he has a lot of songs to share with the world…so it’s neat to help get him started in the business.”

Boone was grateful for Harris’s support and said the recording process was very organic and easy since they have been friends for so long.

“He knew from being in other bands that I had a lot of songs and I had never really come out with something had my name on it and recorded the way I wanted it to be recorded and represent me,” he said.

All of the songs were written by Boone, who had five songs already put together when he came to Harris to start work on SoulLow.

“I started the album after a break up, the first song was written the day that we broke up,” he said. “The rest of the songs came through being inspired by stuff I saw around Richmond or the recording process itself.”

Boone said it look a lot of urging from Harris and personal reflection to be able to release his music for all to hear, thus the drawn-out recording process.

“It was a lot of getting my mind ready,” he said. “I feel like I’m in the place now, I feel that I’m mature enough to handle what this might take on. Devonne definitely helped push me. I’ve never showed myself like this before in such a vocal way, a lot of them do have to do with my personal life…”

Besides Boone singing and playing guitar, the album features a myriad of other Richmond musicians bringing their special talents into the mix including Andrew Trongone (The Trongone Band) back-up vocals by Sam Reed, horn players Marcus Tenney (TENNISON) and Reggie Chapman (No BS!), Reggie Pace on percussion (No BS!), Mark Ingraham on trumpet (No BS!), some members of local jazz instrumental group Butcher Brown and Harris playing a few instruments on a few of the tracks as well.

Featuring these artists allowed for not only a more well-rounded and eclectic album, but a fun recording experience.

“Having the friends we have it’s really cool to call them up,” said Boone. “Those songs that they play on I wanted a different kind of feel, I don’t want to hear myself play guitar all day.”

SoulLow will come out this Friday, April 14 via Harris’ label Reeverb Entertainment. You can catch Steven Boone and DJ Harrison at their release party for SoulLow Friday night at 9 PM, in the Gypsy Tea Room below Vagabond. $10 cover. RVA musician Sid Kingsley will be opening up for Boone.

Back before it got cold, I drove over to the Jellowstone Records house to interview Marcus Tenney and producer END_OF_DOCUMENT_TOKEN_TO_BE_REPLACED