Looking for small businesses to support with your gifting dollars? Look no further — we’ve got what you need in this holiday gift guide.

As a longtime resident of Richmond and lifelong lover of style, I’ve been so fortunate to have spent the last few years surrounded by creatives of all types. Though I myself am a writer, I most admire people who can make real, tangible items like visual art or clothing.

Small businesses are all around us and while we should aim to support them year round, it can feel especially meaningful during the holidays as an opportunity to give unique and unusual presents. If you’re doing gifts this year, ditch the Amazon wishlist and opt to support one of these six independent shops instead.

Because the first three businesses listed are locally based, I’ve had the chance to patronize them for years and never been disappointed. But I’m also one to appreciate new treasures and makers from throughout the world so the last three businesses are recent discoveries of mine from other parts of the U.S. (sparing everyone global shipping). I’ve thrown in the scores I would/have bought from each store for the people on my own list, keeping all suggestions at around $50 or less. 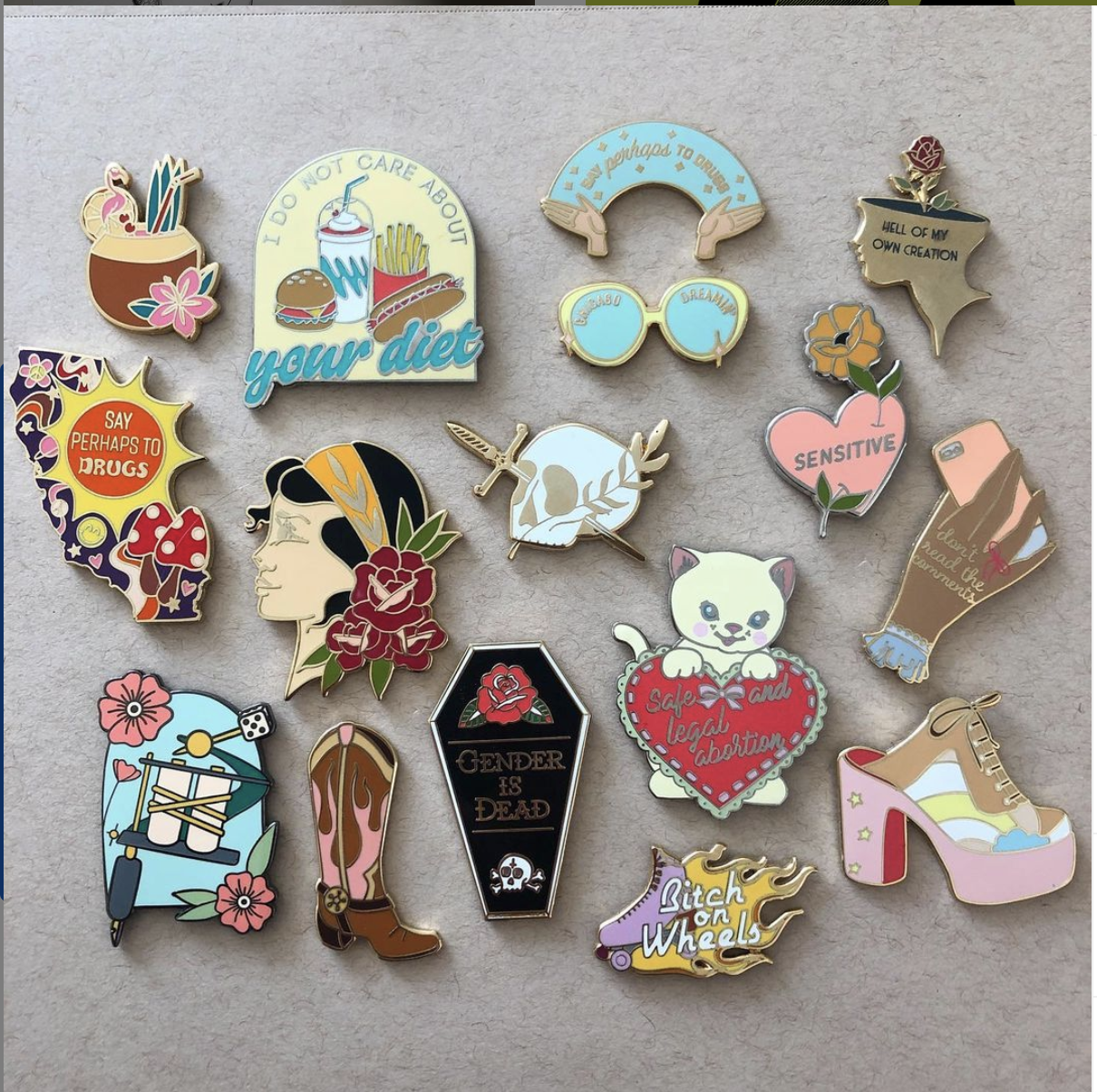 This entire guide was largely inspired by the “shop small” story on Jini & Tonic’s Instagram so it’s only fitting her pithy pins and prints are first on my own list. I’m a fundraiser for Richmond Reproductive Freedom Project, so of course I’ve gifted and been given the safe and legal abortion pin ($10) before. But I also love the boooooobies tee ($50) and vintage vibes not vintage values pin ($10). 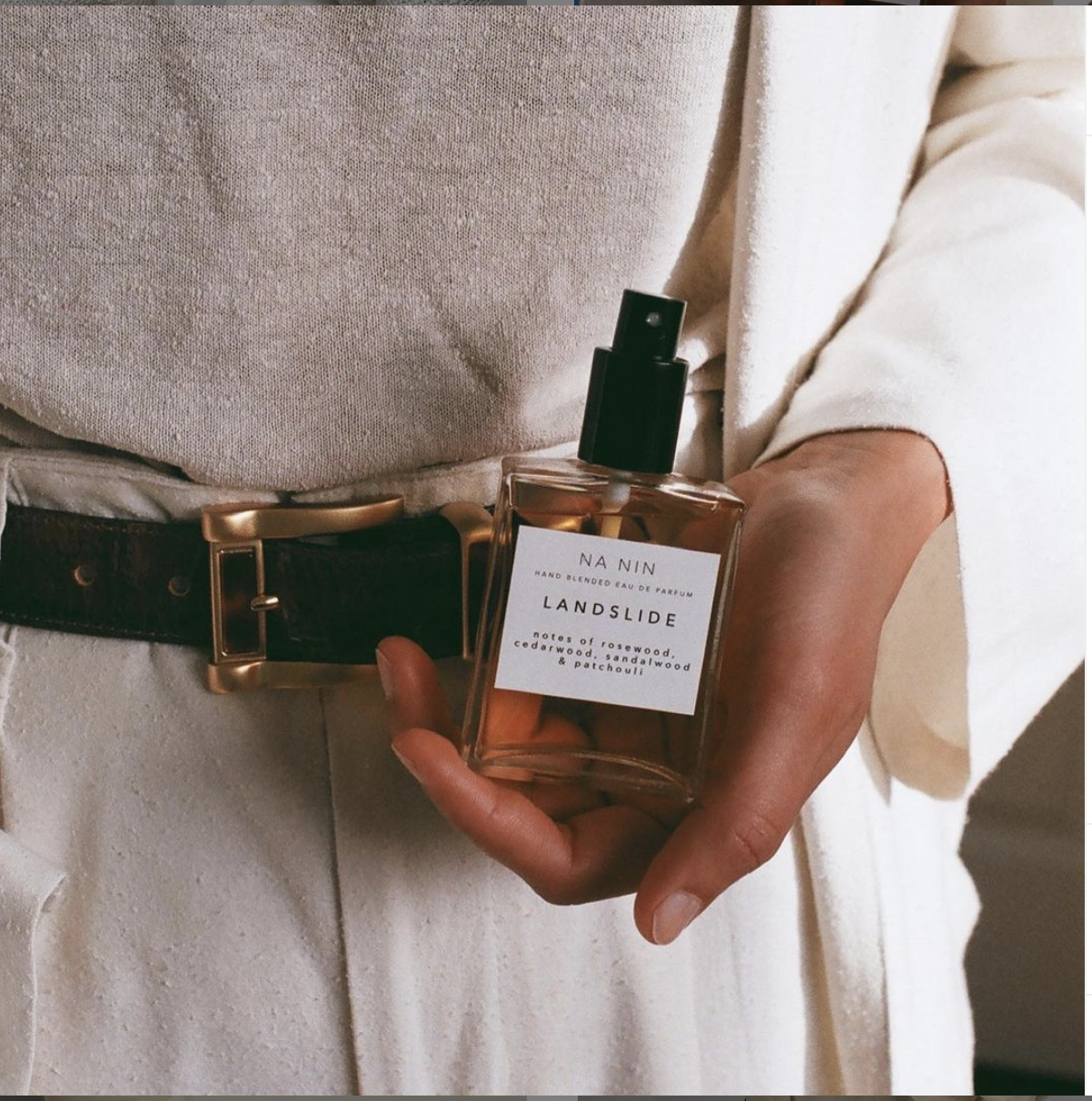 The earthy, balanced fragrances from Na Nin make me feel like a luxurious, high-class hippie. Cripple Creek ($20) is my personal go-to but as a gift, I suggest one of their Travel EDP Trio sets which contain 3 best selling scents for less than fifty bucks ($48 to be specific). For a bit more, spoil the polish lover in your life with the J. Hannah mini polish set ($50). 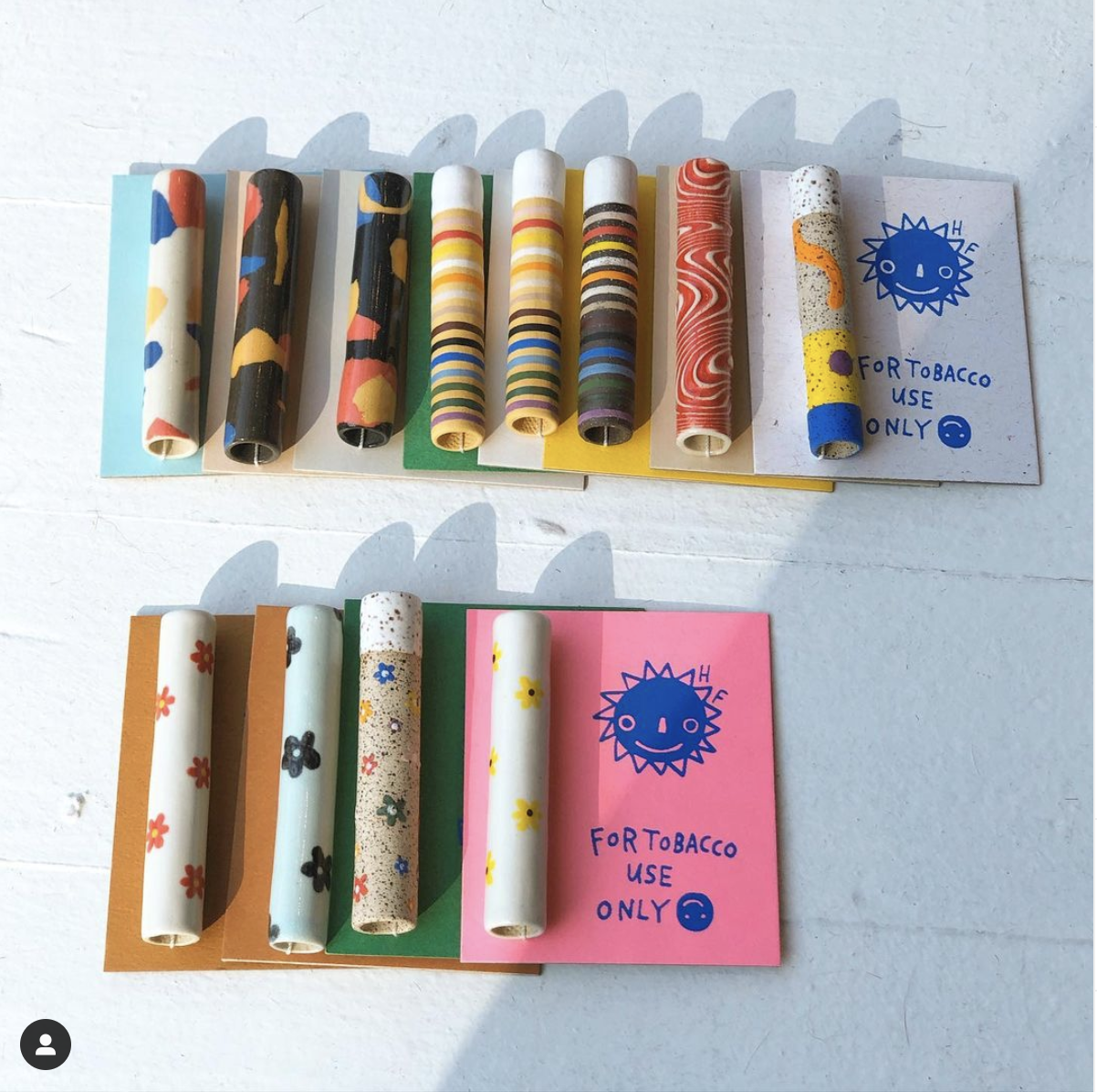 Rosewood Clothing has the most charming gift for the smoker in your life; these Holly Francis pipes ($40), which at first glance could be mistaken for jewelry. For actual minimalist jewelry pieces, check out these hoops ($44), gold chain studs ($56), or simple chain ($36). 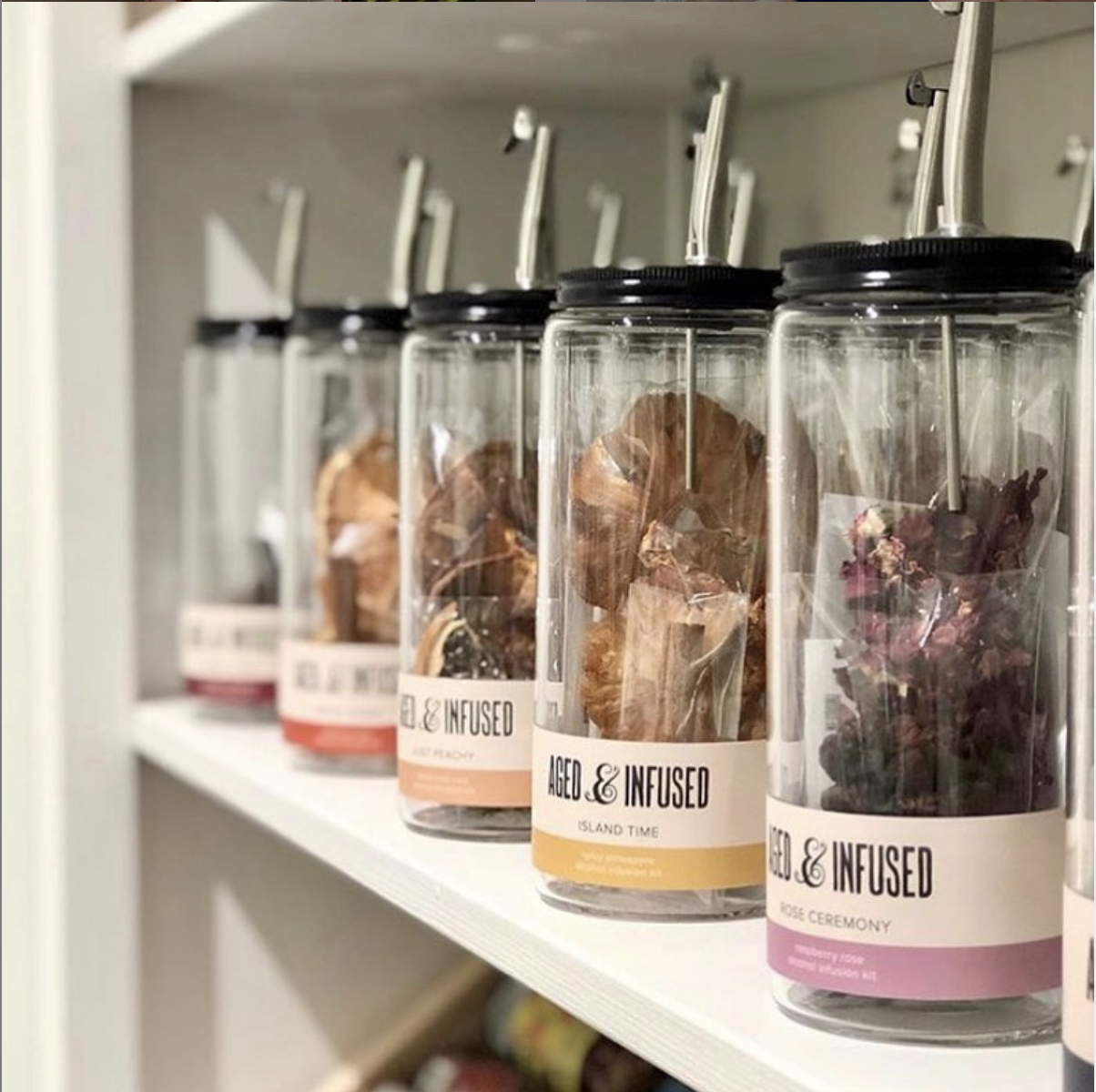 Be your own craft bartender these holidays thanks to Aged and Infused’s kits ($25). These elegantly packaged mixtures contain ingredients which will liven up your spirits (alcohol and otherwise) with classic, nostalgic flavors like Rose Ceremony or Spike the Punch. 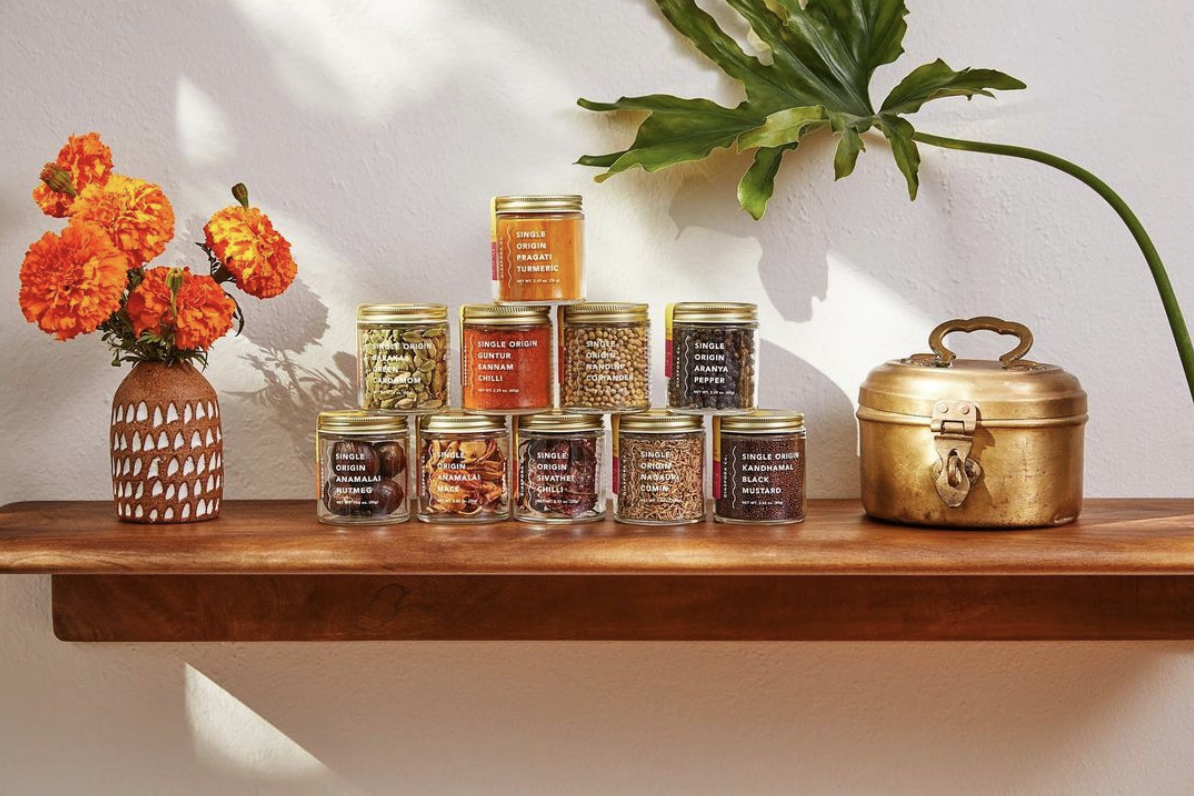 Diaspora Co. aims to decolonize the spice industry through its direct trade, single-origin business model. They offer quality, equitably-sourced individual spices great for stocking up your own pantry, but it’s their collaborations that really make unique gifts for foodies. Turmeric popcorn spice ($9) is perfect for home movie nights, while their date chai caramel is any sweet tooth’s dream. As a “home barista” these days, my personal favorite is the turmeric latte blend ($22). 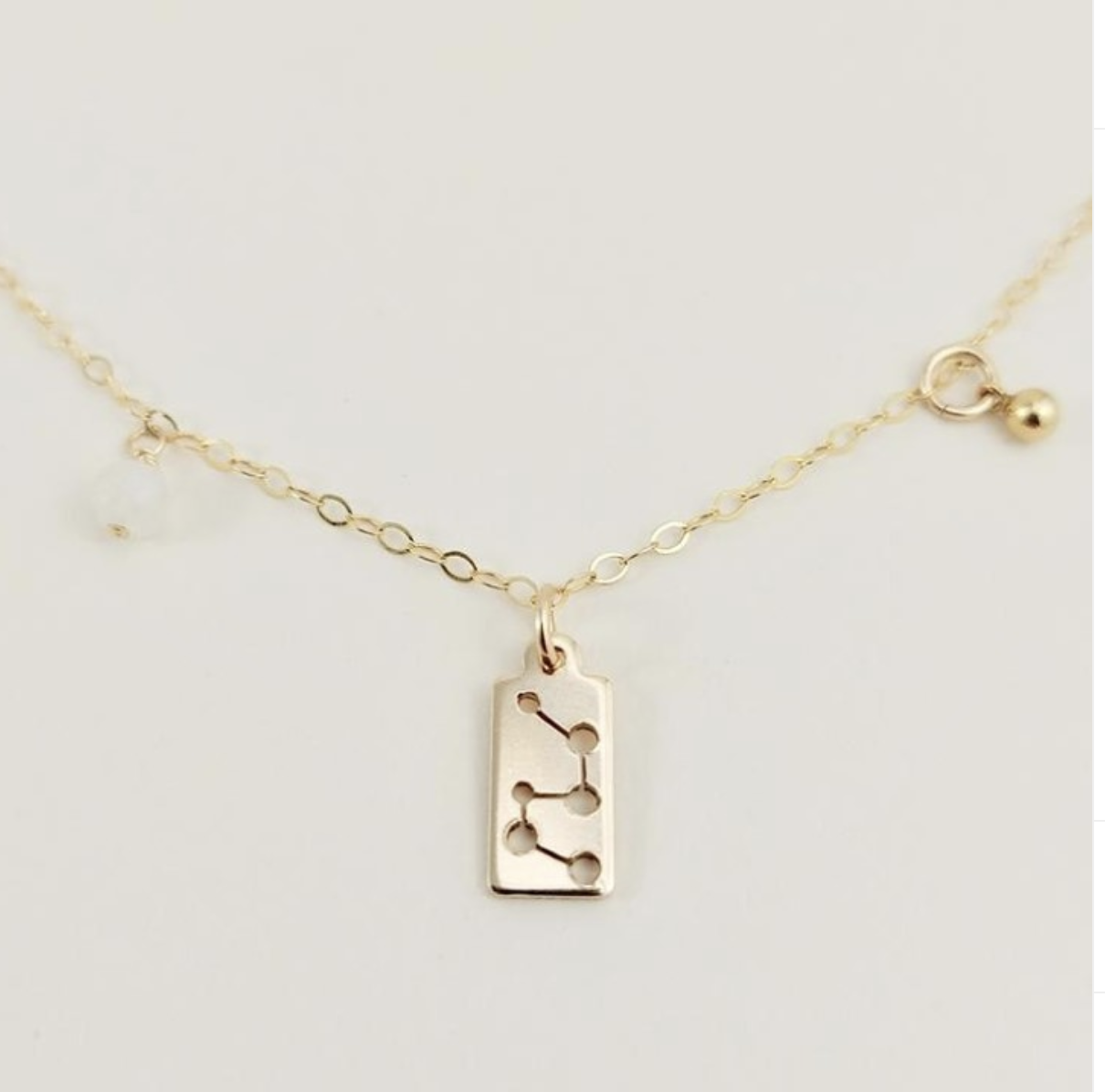 Devi Arts Collective uses recycled metals and ethically cut gems to create elegant jewelry at a variety of price points. They make it easy to give a personalized gift through their zodiac necklaces ($58-$68), or for something with a bit more color, try the birthstone necklace ($52-$72).

Local design company Jini & Tonic is helping you wear your armor on your sleeve through pins and apparel that make definitive statements.

Jini Valence looks like any other Richmonder when you first meet her to get coffee. She’s tall, friendly, has plenty of tattoos, and hell, she even has an art degree (from the land of Chicago). But she has a secret. That new pin that you just bought from Ashby that says “coffee slut” on it in shiny red enamel with black and white accents? She designed that. She has one of the most popular commodifiable art brands in the city.

Valence is the creator behind the brand Jini & Tonic, which features her art in various ways – enamel pins, stickers, keychains, and more. She launched the brand in 2017 and is very open about her views and politics — which focus on mental health, women’s issues, LGBTQ issues, and more — if for no other reason than that she’s not a good liar, and doesn’t want to be.

“I’m not savvy enough to lie,” said Valence. “The reason I wanted to get into illustration is because I was having such a hard time remaining professional, so I knew I was never going to be a person behind the brand who was just running the ship and [letting] the brand [have] its own voice.”

The decision to be upfront and honest from the start was purely self-preservation, and it has been effective so far.

“The decision to be really upfront about my politics and feminism was to defend my mental health,” said Valence. “I knew that if I just created cute things that didn’t have a target market, I would open myself up to people who, when I opened up about Christine Blasey Ford testifying against Congress, reacted like, ‘I liked you before you got into politics’.”

Originally from New Hampshire, she went to college on the West Coast before moving to Chicago for her first job after college. Valence has not been drawing her entire life, but did fall in love with art in high school. However, she quickly became discouraged by an unsupportive teacher.

Her first collegiate course of study was in the non-profit sector. Graphic design classes made clear to her that corporate designs weren’t for her, but two years after she moved to Chicago, she took an art class in the hopes of making friends. She soon learned that the teacher of the class shared a common bond with her — the same unsupportive high school art teacher.

“I started Jini & Tonic with really no intent of it ever being my full time job,” said Valence. She realized that the possibility of art being a full-time career in such a big city was pretty slim, and so the idea of making it as an artist never really crossed her mind until it was suggested by others.

“I had a coworker at the museum I was working at in Chicago go, ‘But the goal of it is for it to be your full time job, right?’ And I just went, ‘Oh.’ That’s when I wondered — what if I moved somewhere where the rent wasn’t $4000 and I did it full time?”

“It mattered to me to be in a better bang for your buck [city in the] South,” said Valence. “Richmond just checked off a lot of boxes for me. My sister [also moved down to Richmond], and it pretty much fell into my lap. I was here two months later.”

It wasn’t just the cheap rent that made surviving as an artist in Richmond viable; crowdfunding also played an important role. Like many artists, podcasters, and other creatives before her, Valence spent some time toying with the idea of using a Patreon to not only help bring in income, but to help finance further ideas that she had. Eventually she pulled the trigger and launched.

“Honestly, I had been squatting on a Patreon for six months,” said Valence. “When they changed their fee structures, you were locked in at the old rate if you joined before a certain date. I was like, ‘Fuck it, I’m just going to launch it.’”

Now that her Patreon is up and running, her big-picture dream is to become a tattoo artist. She explained that a benefit her Patreon offers is help with travel costs for various conventions and shows around the country and beyond, including one she recently attended in Toronto. But the biggest reason she would encourage other artists to follow in her footsteps is peace of mind.

“You deserve to not be panicking over whether you’re going to get a wholesale order, or a client is going to pay your bills that month,” said Valence. “It wasn’t necessarily paycheck to paycheck, but illustration work and merchandising stuff has been very feast or famine.”

With Patreon’s steady monthly payments from patrons, Jini & Tonic is insulated from those financial peaks and valleys. It has both expanded her audience and given her opportunities to create different types of work, beyond her usual focus on politics and LGBTQ issues.

It’s also brought some gigs she wouldn’t have obtained otherwise, including the opportunity to design a series of pins for the popular podcast series, My Favorite Murder.

“Just some sense of stability has been good, but also its a very different creative outlet,” she said. “Right now, I’m working on funny little art designs for the Patreon, and a pin series for 2020.”

Even in 2019, artists of all kinds still face cries of “sellout” when they expand their opportunities to earn money for their art. Culturally, we still view artists in a purely aesthetic light, believing that they should create solely for the joy of bringing art into the world and romanticizing the idea of the “starving artist.” As a result, when artists reach out to expand their brand, they are sometimes met with a stinging backlash.

Valence has attempted to push back against these attitudes by being very open about her business. “One thing that has really worked for me is to be honest to a fault,” she said.

Being honest with her audience is something that she prides herself on, and she feels that it’s part of the reason why so many people support her. As with her initial decision to be upfront about her political views, the results have been validating. The majority of her audience shares her views, and want to support someone who helps them feel seen and heard amid the growing darkness of the world around us.

“I’m going to make this about the issues that are important to me,” said Valence. “That way, everyone who is following me is already on my team.”

Wearing your beliefs on your jacket and your backpack in the form of pins and patches is nothing new. It’s hard to picture the 60s and 70s in America without big peace sign patches and protest buttons everywhere. While wearable art might seem like a trend in 2019, it has a deeper meaning, serving as a silent beacon to other like-minded folks, especially in younger generations hungry to make change.

“Every time I talk about the climate change apocalypse, I feel like my mom reaches for the tin foil hat,” said Valence. “There is something to be said for younger generations feeling like they have a bigger stake in the fight.”

The art of Jini & Tonic makes no apologies for itself, and neither should you. If nothing else, Valence hopes her art reminds you of one very important thing — you are not alone.

“My specific type of weirdness is totally cool and I feel completely empowered to be my whole self,” said Valence. “As a queer person, especially a queer person who knew they were gay [when they were] young, but didn’t come out for a long time, for no reason other than I was [scared] people would think of me differently or not believe me. It would have really meant a lot to me, as a young person, to have whatever external source to help me build my self-esteem. To help me not worry about what the optics of my weirdness was.”

Stay weird, Richmond, and be proud of it.

You can find Jini & Tonic merchandise locally at Ashby’s in Carytown, or on their website, JiniandTonic.com.