A trio of powerful musical talents, Julien Baker, Lucy Dacus, and Thao & The Get Down Stay Down kicked off their latest tour with a celebratory night at The National. Lucienne Nghiem was on hand to capture the magic.

Opening for the night was Thao & The Get Down Stay Down, an alternative folk-rock band with a fair bit of history in Richmond and Virginia as a whole. Their stage presence and energy was so beautiful to watch, and their set was unbelievable. Their sound was so unique and everything from the setlist to the styling and lighting created the perfect environment.

Lucy Dacus had the most angelic setlist, with energy that left everyone feeling warm and fuzzy. Her stage’s set design was beautifully reminiscent of a movie theater, resembling her recent album art and Home Video record title. Dacus — “a hometown hero,” as a fan screamed when she danced onto stage — played tunes from her new album, Home Video, as well as older favorites. She brought her mom onto stage for a sweet moment singing together. Closing the evening with “Night Shift,” a beautiful indie rock song, the crowd sang their loudest.

Julien Baker closed the night with the most phenomenal performance. Her stage presence, confidence, and talent was unreal, and everyone in the audience was so grateful to experience it. She thanked everyone for wearing masks and getting vaccinated prior to the show. It was amazing that the musicians and The National created such a safe environment for their listeners.

Baker opened with “Hardline,” the first track of her 2020 record, Little Oblivions. The warm-toned, striking red lighting complimented the performance so well. With her contagious high energy, guitar solos, and performance, Baker’s set was definitely a once in a lifetime experience. Closing the beautiful night with “Appointments,” her voice echoed so beautifully through the venue throughout this enchanting track that built into such a stunning ending.

Hearing everyone in the room singing along with the artists was a refreshing, stunning moment, and RVA Mag was glad to be there to document it.

After playing two new, comically nihilistic “state of the union” songs in the middle of their set, Decemberists frontman Colin Meloy joked. “It’s usually closer to the end of our show that the realization we’re all going to die sets in.”

However, the mood at the National’s Sunday night was anything but grim, as the sold-out crowd hung onto every word of the Portland group’s first visit to Richmond since touring off The Hazards of Love in 2009.

Three band bills are all the rage these days, but Sunday took it to the next level pairing The Decemberists with a single opener: Matador’s newest signee, Julien Baker, who quietly introduced herself and began the evening with her latest single, “Funeral Pyre.” 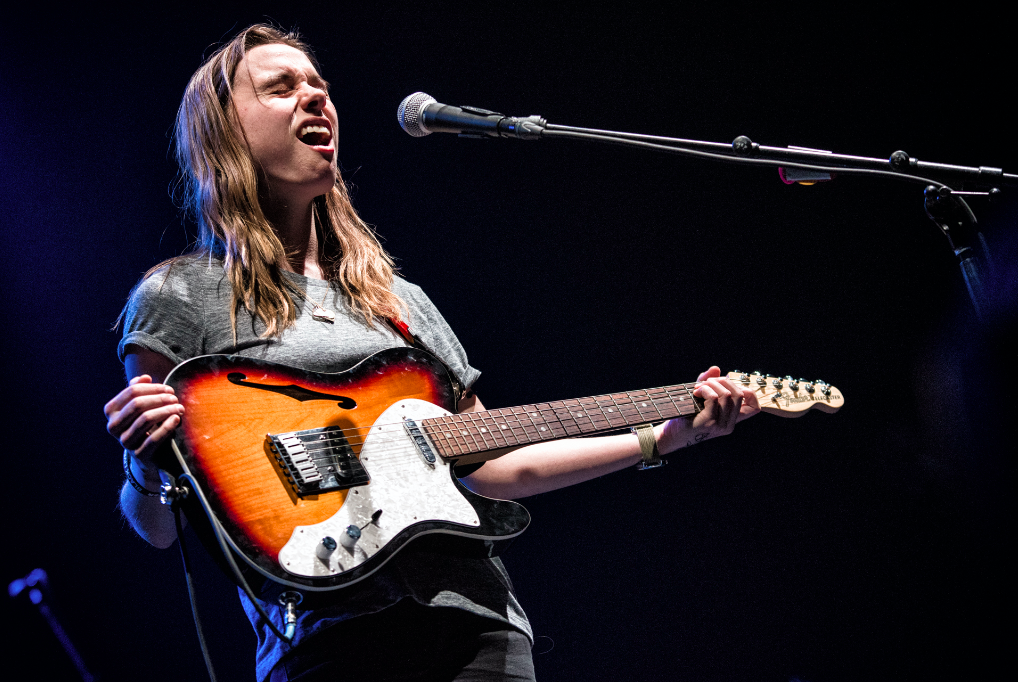 The last time Richmond saw Baker was in the alleyway adjacent to Deep Groove Records for a packed “in-store” performance on her way through town from Hopscotch Festival in September of last year.

Read more about Baker in her interview with GayRVA here

“Pyre” is the first song Baker released since signing to Matador Records and re-releasing her debut LP, Sprained Ankle. Even more so live than recorded, the building refrain “call me a coward/I’m too scared to leave,” and the high notes of the desperate and yet resigned “Everybody Does,” raised hairs on the back of your neck as they rode the vaulted ceiling of the opulent Jazz-age theater.

Alone on stage with her guitar and a few pedals, one might worry that she’d be overpowered by the drone of Richmond’s usually chatty crowds. But the National fell almost silent, aside from the occasional cheer when Baker flexed her impressive vocal chops.

Thematically, Baker’s music confronts and basks in a pervasive loneliness. That she is accompanied only by the gentle reverb of her guitar and subtle looping furthers this feeling, as though her lyrical sadness and desperation echoes through her riffs, soaring and retreating.

For the sparseness of her instrumentation, it’s impressive the dynamic and depth of emotion she covers in a single song. She doesn’t consistently wallow in sorrow, either — running from dry observation (as in “Sprained Ankle”–”wish I could write songs about anything/other than death”) to something close to hope (as in a newer song, “Rejoice”–”But I think there’s a God and he hears either way when I rejoice and complain”). There’s a sense of ecstasy even in sorrow, which resonated deeply with the growing crowd.

“It’s a huge honor for me to be opening for the Decemberists,” she affirmed to cheers.
Ending her set with “Something,” Baker mumbled a quick thank you before ducking back off the stage to a rousing cheer.

After a brief interlude of discordant military-esque horns (and quite a lot of bluegrass in the midset playlist), the Decemberists took the stage. The crowd cheered and laughed as the band feinted starting “The Infanta” then confidently charged forward into an expansive set.

As Meloy sang the line “raise our voices to the air,” he paused to allow the audience to raise their own voices, which they happily obliged with a cheer. 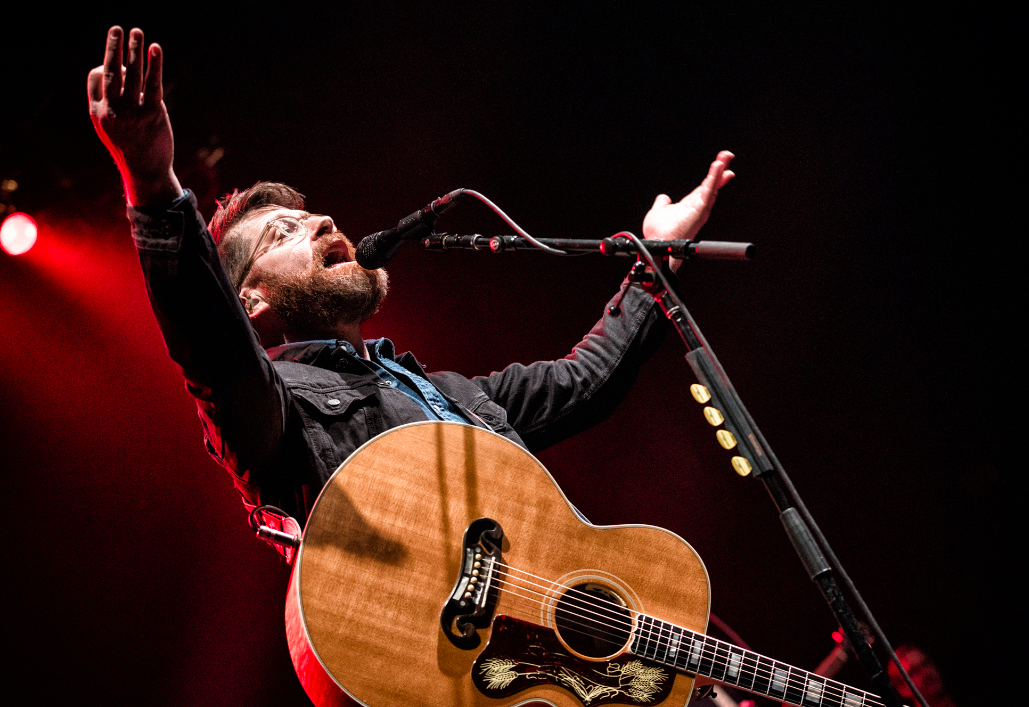 The room had less response, however, to Meloy’s brief shoutout to the Portland Trailblazers’ recent win. But Meloy recovered from his “please clap” moment quickly.

“Anyway, enough sports talk — here’s a song about a joint suicide,” Meloy quipped, as he began “We Both Go Down Together.”

It was difficult to tell at times where the harmonizing vocalists and the enthusiasm participation of the crowd began and ended. Many, if not most of the band’s songs, were met with audience members singing every line.

The band also had a few surprises planned for their Richmond show.

Meloy, noting that there was just enough “hooting and hollering,” told the crowd that they’d play a new song they had never played live before.

The song began as a call and response between Meloy, keyboardist Jenny Conlee, and the band’s two other touring vocalists, each singing the word “everything,” passing the word between them.
Then, as a full harmonized chorus: “everything is awful!”

The crowd erupted into laughs and cheers. Meloy later described the song as “a state of the union,” once again to laughter and applause.

The band began a rambling start into another new song, another “state of the union” with a bluesy chorus that almost gleefully proclaimed, “we all die young!”

Meloy commented on the low energy of the crowd after the song, noting that they had compressed their more nihilistic songs mid-set. Laughs accompanied his observation, and the band continued into more familiar territory with “After the Bomb.”

The end of the set favored their 2015 album strongly. Their encore featured their 18-minute prog-rock epic “The Tain,” from their EP of the same name, and “Dear Avery,” from the King is Dead.

Though the band’s more melancholy songs might be a “state of the union,” there was still plenty of joy to be had in the event.