I am a foreign policy pragmatist after spending years abroad in various regions that have experienced war and conflict. All foreign policy practitioners know that sometimes you just luck into things; other times, best laid strategic plans fall apart due to an ever-present complexity that becomes unmanageable.

The nuclear summit in Singapore with North Korea was a net-neutral in this regard: nothing really gained, nothing really lost, a lot of photos taken. In the foreign policy age defined by President Trump, this can probably be summed up as a success, more so given the potentially disastrous consequences of the G-7 meeting that proceeded the summit.

For the sake of drama and juxtaposition, there is nothing more awkwardly gut-wrenching than seeing the President of the United States refer to the Canadian Prime Minister as “meek and mild”, while embracing Kim Jong Un, the brutal dictator of North Korea, as “honorable”.

Nonetheless, what just happened and what does it all mean?

Trump and Kim both won, at least optically. Kim almost certainly won more than Trump (in this foreign policy age let’s keep with the zero-sum term of “winning”). He got the propaganda coup of being elevated to the same stature as the President of the United States by having at least six public photo opportunities with Trump along with having lavish praise heaped upon him. Unfortunately, this will only reinforce the dictatorial control over his own people who are starved, enslaved, tortured, and isolated from the rest of the world – more than 120,000 people are currently languishing in state-run gulags.

There were no pre-conditions for this summit on human rights, something that is used tirelessly by the administration to admonish Iran, but was used as a pretext for Trump to pull out of that nuclear deal known as the  Joint Comprehensive Plan of Action – #interestingthat.

Trump also announced an ending of joint US and South Korean military exercises, something he admonished as “very provocative”. These military exercises are a way for the US to project strategic depth throughout the region, ensure military preparedness, and are a signal (even a weak one) to the Chinese, who as of this morning have already praised this move. 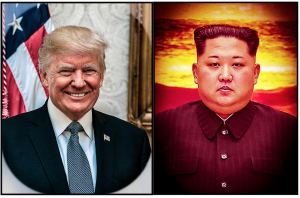 It does not appear this was agreed upon with the South Koreans or strategized around with the Pentagon or Joint Chiefs; a classic Trump move, making military policy on the fly. A US military spokeswoman in Korea said this only a few hours ago, “USFK has received no updated guidance on execution or cessation of training exercises – to include this fall’s schedule Ulchi Freedom Guardian.”

As a workaround, the president framed it as a cost-saving measure saying, “Number one, we save money. A lot. And number two, it really is something I think [North Korea] very much appreciated.”

In terms of denuclearization, an agreement was signed, true, but the language lacked a robust framework for moving forward. The US traded “security guarantees” (a nice way of saying we will not engage in regime change, so don’t count on Korean unification any time soon) for broad language indicating Kim will denuclearize – there was no pathway to indicate how this would actually happen. The North Koreans have been playing this same game with the US since a failed framework was negotiated by Bill Clinton in 1994.

There was no language in the agreement that signaled “verification” was on the table; the same process the Iranians have successfully been held to, even though we are pulling out of that nuclear arrangement – #interestingthat.

When you stack all of that up, winning does not come to mind, least of all for the president who ostensibly claimed that he might, “…stand before you in six months and say, ‘Hey, I was wrong,’” which he followed with, “I don’t know that I’ll ever admit that.”

So what does Trump get and how does he win? Optics! Lots of optics! All the optics, leading into the mid-term elections! While there is a genuine desire by astute foreign policy practitioners like Secretary of State Mike Pompeo and National Security Advisor John Bolton to get the job done, Trump understands the symbolic value of this summit to his main support bases.

His intransigence at the G-7 was a perfect lead into the nuclear summit and was executed flawlessly to engage his base. He has succeeded where other presidents have failed; he is strong, they are weak.

He also knows that this boxes the Democrats into a tight corner when it comes to foreign policy. No one is going to argue against denuclearization, so as a Democrat you either have to tacitly support this “win” or be one of those shrill politicians who gets labeled a do-nothing as the US boasts a diplomatic victory decades in the making.

Either outcome for the president is a win. The actual particulars of denuclearization or the long-term impact on regional foreign policy in the Pacific are entirely inconsequential to Trump, nor does his base actually care. The perception of “winning” is better than any actual “win”.

This also moves attention away from the Russia investigation at a time when six out of ten Americans believe the investigation needs to continue, and Democrats maintain a seven percent lead going into mid-terms.

The media can only focus on so many issues at once and every issue nowadays is a moving target. By the time the buzz and news hangover surrounding this summit finally dies down the Russian investigation will have skipped three beats ahead. All of which works in Trump’s favor, giving the administration time and space to shape a new narrative for the American people – something he has proven incredibly adroit at.

In the end, this summit was the very definition of foreign policy ‘meh’. No gains were made, no losses tallied, and a lot of photos were taken. Should North Korea decide to denuclearize that will be a tremendous boon to global stability and the president should get credit for that, even begrudgingly. But before the bells start ringing and Nobel Peace Prizes issued, there are about a hundred and one steps that will need to be taken to ensure that denuclearization actually happens.

Should there ever be a time when we need to focus on the signal and tune out the noise this is it…because there are things happening in the background that will shape our understanding of foreign policy for years to come.