Politics can be a pretty amoral game. Despite the constant rhetorical appeals to high-minded ideals, the order of the day where actual campaign tactics are concerned seems to be “if it hurts your opponent, do it.” Concerns about veracity and integrity come in second to scoring points, regardless of who gets hurt in the process.

And the sad part is: it works. The latest evidence can be found in Democratic gubernatorial candidate Ralph Northam’s declaration to Andy Fox of Norfolk’s WAVY-TV that he’d sign a bill banning sanctuary cities in Virginia if it came across his desk. “If that bill comes to my desk, Andy, I sure will. I’ve always been opposed to sanctuary cities. He knows that,” Northam said, referring to his Republican opponent, Ed Gillespie.

Gillespie’s been making a big deal out of sanctuary cities ever since this summer. Sanctuary cities are generally understood as localities which refuse to cooperate with federal immigration authorities in deporting undocumented residents. None currently exist in Virginia as of this writing, for the record. Nonetheless, the issue has remained at the forefront of the current gubernatorial race.

Gillespie has continually hammered Northam for a vote that took place this past February in the General Assembly. A bill to ban sanctuary cities came up to a vote, and when the result was a tie, Northam in his role as Lt. Governor was called in to cast the deciding vote. He voted against the bill, though a later vote ultimately passed it out of the General Assembly–at which point Gov. McAuliffe voted against it.

It’s a similar form of support that the Latinx community has been hoping to receive from Northam if he is elected as McAuliffe’s successor. However, Gillespie has continually turned up the heat on Northam where this issue is concerned. It began with an attack ad at the end of August that referred to “Ralph Northam’s risky policies” and specifically cited Northam having “cast the deciding vote in favor of sanctuary cities that let illegal immigrants who commit crimes back on the street.”

If that sounds like a misleading claim about what sanctuary cities actually do, you’re on the right track. As Randolph Macon Associate Professor of Political Science Rich Meagher wrote in a previous RVA Mag article, “What we call “Sanctuary cities” are not actually a real thing. Different localities commit to different levels of cooperation with immigration authorities throughout the Commonwealth.”

But the claim seemed to work in Gillespie’s favor, so much so that he went back to the well with a recent ad featuring the tattooed faces of MS-13 gang members above the words “Kill, Rape, Control.” Our own Political Director Landon Shroder called the ad “an obvious racist dog whistle” intended to “fear-monger in suburban and rural spaces by trying to make Northam look weak on crime.”

Latino Victory Fund fired back at all of Gillespie’s recent fear-mongering around the issues of sanctuary cities and undocumented Latin American immigrants with a recent ad depicting Gillespie supporters as Confederate flag-waving white nationalist terrorists. The ad may have been a bit “over the top,” in Governor McAuliffe’s words, but it seemed to strike a chord with Northam. Speaking to WAVY-TV, he said, “The MS-13 gang commercials against me have been very offensive to a lot of communities in Virginia, and so these communities have responded to that, and that is their right.”

It’s a fair point. But it wasn’t enough to keep LVF from bowing to negative pressure from Republicans and pulling the ad. And now, it seems to have pushed Northam into dropping his previous nuanced stance on sanctuary cities–that he never specifically supported them, that Gillespie was stirring up outrage around a fake issue, and that his February General Assembly vote was more complicated and less black-and-white than Gillespie made it seem. Instead, in the same WAVY interview, he came out for the first time and said that as governor, he’d sign the same sort of bill he voted against in the General Assembly less than a year ago.

Ta-daa! It worked. Gillespie hammered Northam on the overblown sanctuary cities issue until Northam finally caved and said what the Republicans want to hear. Rather than seeking the votes of young people outraged to see the harm Trump’s DACA repeal has caused their peers, rather than seeking to lock in the growing Latinx presence in Virginia by showing that he sees Gillespie’s racist fear-mongering for what it is, rather than giving other marginalized Virginians reason to believe that he will protect them, Northam has shown that for the majority of the voters who made up the celebrated “Obama coalition” and turned Virginia blue for the first time in nearly half a century, he’s going to be more of the same old same old.

If Northam’s unwillingness to stand up to Gillespie’s continued attacks is any indication, all young people, people of color, LGBTQ people, and other threatened minority populations can expect are vague reassurances, the occasional derailing of the GOP’s worst excesses, and a continued erosion of even the tiny victories these groups have worked for years to gain.

Issues like this one will make the difference in this election, and by failing to stand behind the vulnerable populations who ostensibly have the most to gain from a Democratic victory, Northam and the Virginia Democrats may very well seal their fate. Because let’s face it–uninspired people don’t worry too much about making it to the voting booth.

The political backlash from Virginia Republicans to an ad released by the Latino Victory Fund (LVF’s) was swift, and it was fierce, so much so that the advertisement was pulled only a day after it was released. The minute-long ad shows a menacing white man driving a pickup truck with a “Don’t tread on me” license plate and a Confederate flag flying. The man then proceeds to terrorize minority children in some nondescript suburban neighborhood. As the ad closes, it is revealed that the children are only dreaming, as a voice-over monotonously states, “Is this what Donald Trump and Ed Gillespie mean by the American Dream?” Images of Nazis marching through the streets of Charlottesville play on the television as the ad closes.

There is so much to unpack in all of this. Where does one even begin? Virginia’s governor’s election is now a race to the bottom, pandering to the worst excesses of both bases. Did this ad unfairly characterize all Gillespie supporters? Probably. But only because contemporary politics is a zero-sum game and an exercise in mutually assured destruction. Was the Democratic mailer linking Gillespie to Trump and the white supremacists in Charlottesville a little bit over-dramatic? Probably. But only because modern political campaigns are more likely to draw from the scorched earth tactics of Genghis Khan than be an honest articulation of policy positions.

All politics is theatre, and in the US, that theatre is a non-stop reality show we are all forced to participate in – willing or unwillingly. Nonetheless, Republicans have excelled at fear-mongering in this election by taking a page out of President Trump’s playbook and keeping the rank and file’s gaze averted from the critical issues plaguing the Commonwealth. Instead of focusing on sea level rise, infrastructure development, Medicaid expansion, and criminal justice reform, we have MS-13, saving Confederate heritage, and giving fright over Governor Terry McAuliffe’s felon rights restoration program – widely considered to be a model for other states to follow.

A Washington Post Scholar-School Poll released yesterday found that 51 percent of all Virginias believe Gillespie is running a negative campaign compared to the 37 percent who believe the same of Northam. This is what makes Republican outrage over the LVF’s ad such an obvious sham. In a statement, the LVF has said, “We held a mirror up to the Republican Party, and they don’t like what they see.”

It is hard to argue the LVF’s sentiment when Ed Gillespie’s flagship political ad was designed to scare white suburbanites and voters in rural spaces by parading images of Latin gang members’ tattooed faces with the words “rape, kill, control” plastered over them. Nor is the messaging the LVF ad brings to bear particularly missing the mark. Not when UCLA just published a report finding that stress, anxiety, and hostility is peaking in public schools throughout the US due to the political environment fostered by Trump and, by default, the Republican Party. The study, titled: Teaching and Learning in the Age of Trump: Increasing Stress and Hostility in America’s High Schools, has, among other things, found that 80 percent of all students were frightened for their well-being due to concerns over immigration, travel-bans, LGBTQ rights, and the environment. An additional 40 percent also said these concerns made it hard for them to focus on their education and even harder for them to go to school.

According to the Washington Post, the report cited a teacher from Ohio who said, “I had students stand up in the middle of class and directly address their peers with racial slurs.” She went on to say, “This is not something I have seen before.”

The messaging execution of the LVF’s ad could have probably been more succinct and less ethereal, but the overall message is not wrong. Which is why pulling the ad was an ill-advised strategy. It surrendered the moral and ethical high ground of the message to the worst excesses of the Republican Party – excesses that have prioritized fear-mongering and racist dog whistles throughout this campaign season. Those excesses were on full display yesterday via Facebook, where the Virginia GOP condemned the ad as racist (against who?) and went so far as to get six minority members of the party to demonstrate their full outrage – a tried and true tactic that always appeases the conservative base. However, pushing a narrative that white people are somehow the victim of racism is the foundation by which white nationalists, supremacists, and the alt-right continue to grow their movement. 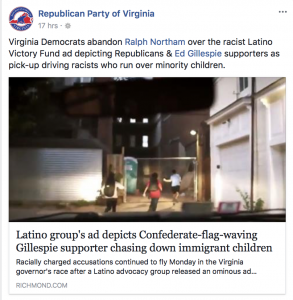 That this narrative has become an open mainstay of the Virginia GOP should deeply concern everyone. Yet in an election cycle where the violence perpetrated by white supremacists is on the forefront of everyone’s mind, being able to divert the conversation away from the root causes of hate and bigotry is how the Republican Party has been able to shirk their share of the responsibility for its growth. This is also how they have been able to hijack the conversation Democrats should have been leading for all Virginians.

Virginia is one week away from the election, and whatever the outcome the levels of rhetoric, divisiveness, and fear-mongering will have irreparably shaped the face of modern Commonwealth politics. Given the atmosphere which has been created by this election cycle, it is unlikely that Virginia will be able to reconcile overmuch. Everyone has now taken a side and as a result, entrenchment and intractability is the status quo everyone should expect for the next four years in Virginia.