Virginia politics has now entered a new phase. Bigfoot erotica, a new subgenre of cryptozoological inquiry in which the elusive creature is pictured in sexual situations, has popped up on the Instagram account of Republican Congressional Candidate for the 5th District, Denver Riggleman. While Riggleman’s account is apparently set to private, his Democratic challenger, Leslie Cockburn, allegedly found the images and they do not disappoint. Cockburn has now taken to Twitter questioning the candidate’s suitability in running for high office, saying, “He has been exposed as a devotee of Bigfoot erotica. This is not what we need on Capitol Hill.”

While Bigfoot erotica makes for questionable credentials for high office, Cockburn, in the same Tweet, also claimed that Riggleman is an acolyte of Republican Senatorial Candidate, Corey Stewart. “My opponent Denver Riggleman, running mate of Corey Stewart, was caught on camera campaigning with a white supremacist.”

According to The Daily Progress, which broke the story, Riggleman has penned at least one book on Bigfoot called, “Bigfoot Exterminators Inc. The Partially Cautionary, Mostly True Tale of Monster Hunt 2006.” The campaign manager for Cockburn, responding to the viral tweets, has said, “Leslie has been traveling throughout the district meeting with real people about real issues that matter to them…Meanwhile, Mr. Riggleman is home scrubbing his social media of ‘Bigfoot erotica’ and who knows what else.” 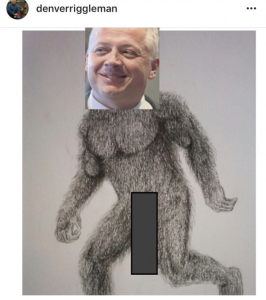 Cockburn’s tweets have now gone viral, being shared over 4,000 times, and were met with some colorful commentary from the Twitter-verse, the best of which can be found below: 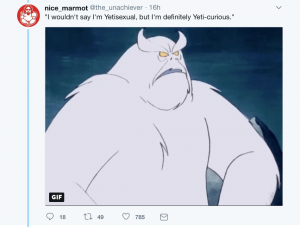 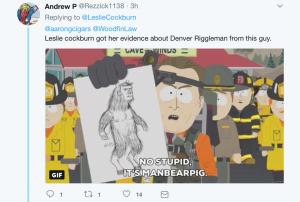 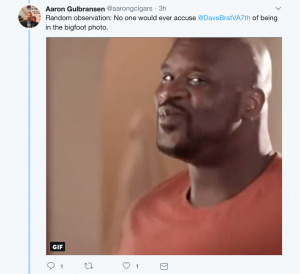 For more on Bigfoot Erotica, check out this article by Buzzfeed. Don’t ever say RVA Mag didn’t do anything for you, Virginia.