Founded for 1708 Gallery’s 30th anniversary, InLight Richmond was established in 2008 and features a wide array of light-based performances and art. With each year starting off with a community light parade of lanterns, this free-to-attend public exhibition produces an annual selection of sculpture, performances, and video and aims to change the way we view art in a temporal space as InLight art exists outside of traditional gallery walls and space.

Director of 1708, Emily Smith, is especially excited about a few highlighted artists from this year’s lineup. Máximo González is an artist based out of Mexico, born in Argentina, who has been on Smith’s radar for quite some time. His featured work consists of two light-based room installations, one called “Pangea” and the other “Walk Among Worlds.”

“He works with light in regards to globalism and an international culture, or the lack thereof,” Smith said on González’ installations.

González has been making art and installations for decades. His two featured installations within InLight comes from the heritage of older projects he has done. González’ partner, Ivan Buenader, elaborated on the effects these sculptures represent.

“‘Pangea’ is a large wall installation of nails and copper wire of all the United Nations’ capitols,” he said. “Its shape resembles the ancient continent that contained all present land mass and continents.”

As for the “Walk Among Worlds” portion of the installation, it is a watered-down version of its predecessor. When the piece first opened in 2011, the work featured 7,000 inflatable, custom globes that were strewn across the floor. The version premiering at InLight only features 1,000 globes, but that’s only because 7,000 wouldn’t fit. 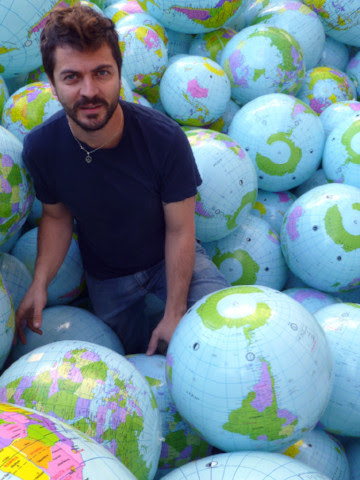 “One-thousand inflatable beach balls are on the floor and on the wall. They reconfigure themselves; some are attached, some are freeform. It’s reminiscent of something natural.”

Smith also spoke on the importance of performance art in InLight. She reached out to Virginia Commonwealth University Dance & Choreography faculty to see if she could garner interest from small-contained, self-produced performances from senior dancers, and they were more than willing to oblige and accept the opportunity. The two selected VCU Dance seniors are Tay Diggs and Michelle Koppl.

“Dance provides a different texture and dimension to InLight,” Smith said. “The endeavor to provide a platform for students is always very meaningful to us. Also, it gives them an opportunity to perform outside of a traditional theatre space.”

The Virginia Commonwealth University Department of Dance and Choreography presents the first part of its two-part all Senior Project Concert at InLight. Two of the contributing dancers will be performing their numbers within the event’s timeframe, creating an even more layered temporal feeling.

Tay Diggs’s “One Drop” is her site-specific work that was conceived around the notion of colorism, which is the favoritism of lighter skin tones over darker skin tones. Through Digg’s own experience with colorism, being a darker-skinned woman, she has observed the societal treatment that unfolds not only in the black community, but as well as Hispanic and Asian communities.

“It stars an all-black woman cast, ranging from skin tones, and they’re dancing around and painting canvases. They are also painted with a coat nearest to their skin tone,” Diggs said.

Michelle Koppl’s “Phosphorescence” modernizes the work of Loie Fuller. In her reimagined piece, five dancers dance and mimic energy and life while a projection from Holly Ashton, her collaborator, portrays radioactive particles reaching their half-life over top of them. Koppl let her dancers create their own choreography and she directed the movement like a conductor.

“The images of radioactive particles decaying in their half-life boil and change colors are juxtaposed against the half-life of the dancers’ performance. They both begin to melt at the same time,” Koppl said.

These are only some of the featured artists at this year’s InLight Richmond, so you wouldn’t want to miss out on some spectacular free art. You can see the full list of artists here. InLight kicks off tonight at 7pm. More details here.