This Saturday at Stone Brewing, Solana brings a taste of Mexico to Richmond fashions.

This Saturday at Stone Brewing, Solana will be launching a new collection that put the spotlight on Mexico at an all-day pop-up event. Solana is a shoe brand that uses the power of art to promote worldwide solidarity and cultural understanding. Based in New York, Solana travels the world collaborating with local artists to design shoes that highlight cultures and places that are too often overlooked or misunderstood.

Founder Yasmine Idriss’ travels throughout the world inspired her to start Solana. “I was born in the US, grew up in the Middle East, and was educated in Europe before university in the States,” she said. “By the time I turned 20 years old, I had already visited nearly 40 countries.”

Today, Idriss still continues to venture all across the globe. She says that Solana is a way for her to share her experiences with the world and inspire a love of traveling in others. The shoes are a medium by which artists working with Solana can share a slice of their culture with the world.

“The goal is ultimately for people to hear these stories and step into another culture,” Idriss said.

The debut collection of shoes from Solana featured artists from Lebanon. “Lebanon has been war-torn for almost 50 consecutive years, and yet life goes on,” Idriss told the Del Mar Times. “People are cheerful and, despite a permanent nostalgia that you feel when talking with the Lebanese, they are always hopeful.”

Sales from the Lebanon collection helped Solana to give back to an NGO that educates Syrian refugees in Akkar, Lebanon.

The brand will shift its attention on Saturday with the launch of its Mexico collection. “We chose Mexico for our second collection after visiting Mexico City and falling in love with the place,” Idriss said. “It was raw and beautiful. We saw bright colors mixed with a darker side that’s somewhat like the inside of a heart.”

The Stone Brewing pop-up event will feature seven shoes and seven shirts. After a call for submissions, the collection’s artists were picked once Solana conducted a vote that thousands participated in. “We were overwhelmed by the quality and quantity of submissions,” Idriss said. “We used the public vote and our own panel’s votes to choose the final designs.”

Ultimately 14 artists, ranging geographically from Baja in Mexico’s northwest to Yucatan Peninsula in the country’s southeast, are featured in the collection. Though Idriss compares picking a favorite shoe to picking a favorite child, she is willing to grant “Tierra Caliente” the title of her favorite shoe in the collection. Designed by the artist Carolina DM, the shoe symbolizes the past, present, and future of Mexico.

“This shoe is what we endured, what we dream about, what we live day to day in our country,” the artist said. “This illustration is for Mexico, my Mexico.”

Having spent six weeks traveling throughout Mexico, Idriss hopes that the collection helps to promote a greater understanding of the country. “I think for the average American, Mexico is a place people go on vacation and a place where their workers come from. That’s the sad truth,” Idriss said. “At worst, when vilified, it’s seen as a dirty or dangerous place.”

With Solana’s Mexico collection, Idriss hopes that she can tell a more accurate story about a place that is often misunderstood and misrepresented in the United States. “If you want to know someone, you have to step into their shoes, to walk their path, to see with their eyes,” Idriss said.

Aside from the Solana shoes, Saturday’s pop-up event at Stone will feature food, live music, and craft beer. Stone Brewing will also be announcing the lineup for Throw Down in RVA, a music festival hosted by Stone on Brown’s Island in September.

“To tell the most authentic story possible, a lot of time has gone into producing these shoes and shirts,” Idriss said. “It’ll also be just about one year since the launch of our debut collection in Beirut, so we’ll be celebrating no matter what.”

The celebration will take place at Stone Brewing’s Richmond location, at 4300 Williamsburg Ave. in Rockett’s Landing, from 12 noon til 9 PM on Saturday, June 22. For more info, click here.

In tandem with the Halloween spirit, there are several other worldwide holidays that honor and romanticize the recently departed. One of these holidays that are gaining popularity within the United States is Day of the Dead, or Dia De Los Muertos, a celebration of the lives of lost loved ones that originates from Mexico. Family members are honored with homemade altars inside the homes of the ones they left behind who decorate these “ofrendas” with pictures, flowers, and favorite foods.

The history of Day of the Dead goes back over 3,000 years ago. It is believed that on midnight of October 31, the gates of heaven open for all the spirits of deceased children so that they can return to their families for 24 hours. And then on midnight of November 1, the spirits of adults return to enjoy the festivities their families have planned. The beautiful altars that the families make are full of marigold flowers, pictures, and several hearty foods like fruit, tortillas, celebratory breads called “pan de muerto,” hot cocoa, and water for their weary travels from heaven. Candy, treats, and toys are left for the children while shots of liquor and cigarettes are left for the adults. 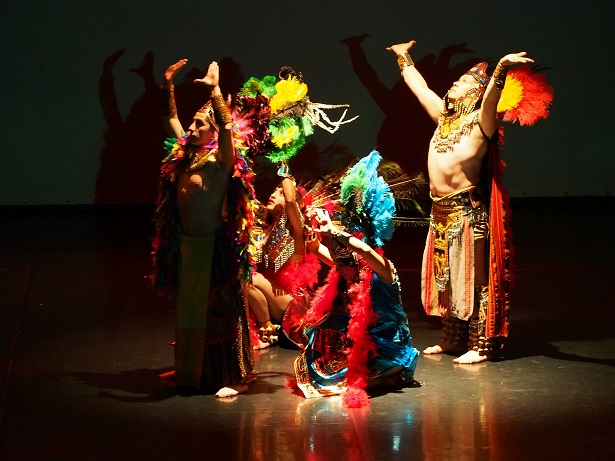 Preparation for Day of the Dead is expensive and takes some families months to acquire enough financial contributions to present, often taking a whole month’s income, or more. These indigenous people believe that the satisfied spirits of their loved ones will offer the family protection and goodwill for the coming year, while the tactile process of assembling altars brings the families together. And on the final afternoon of the holiday, families take their celebrations to cemeteries where they share stories about their deceased and clean the local tombs.

Every year in Richmond, the Latin Ballet of Virginia and the Glen Allen Cultural Arts Center collaborate to facilitate a free-to-attend festival for their celebration of Dia De Los Muertos. Held at the Cultural Arts Center, the Latin Ballet, alongside Richmond Ballet Minds in Motion Ambassadors, produce dance performances to the public that share culture, history, and in-depth looks into the holiday. 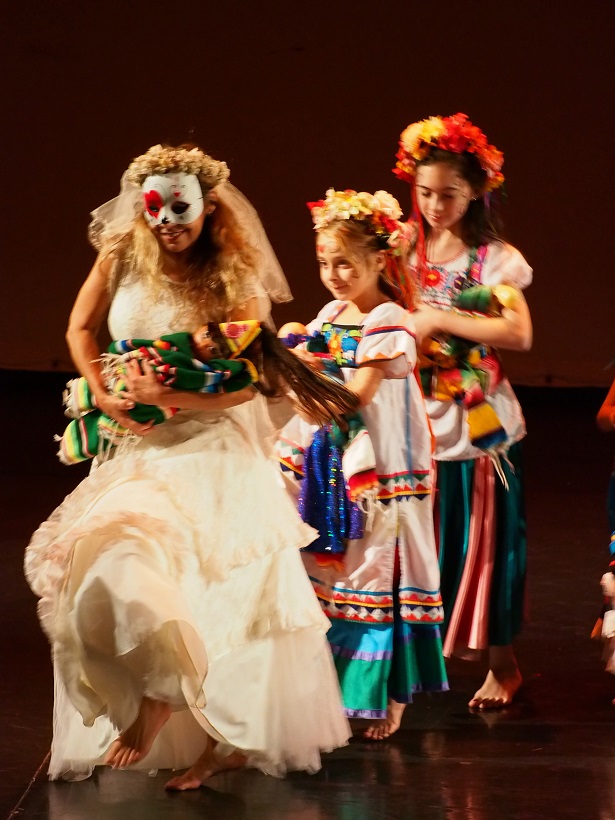 “We started celebrating Dia De Los Muertos in about 2003, and back then, it was difficult to get people out and celebrate a holiday like Dia de la Muertos,” said Ana Ines Barragan King, the Director of the Latin Ballet of Virginia. “It’s taken us fourteen years, but more and more people love it. It is a holiday that originates from Mexico over 3,000 years ago, but several countries from around the world, like India and some African countries, celebrate the holiday under a different name.”

King is from Colombia where do they not celebrate the holiday.

“When my father watched my first festival, he was in shock,” King said. And it stems from the Catholic domination of the Aztec. Spain does not celebrate Dia De Los Muertos either. Catholics celebrate All Souls and All Saints Day during the same time, so here in the US, the holidays have combined to become the Dia De Los Muertos we know and celebrate today.” 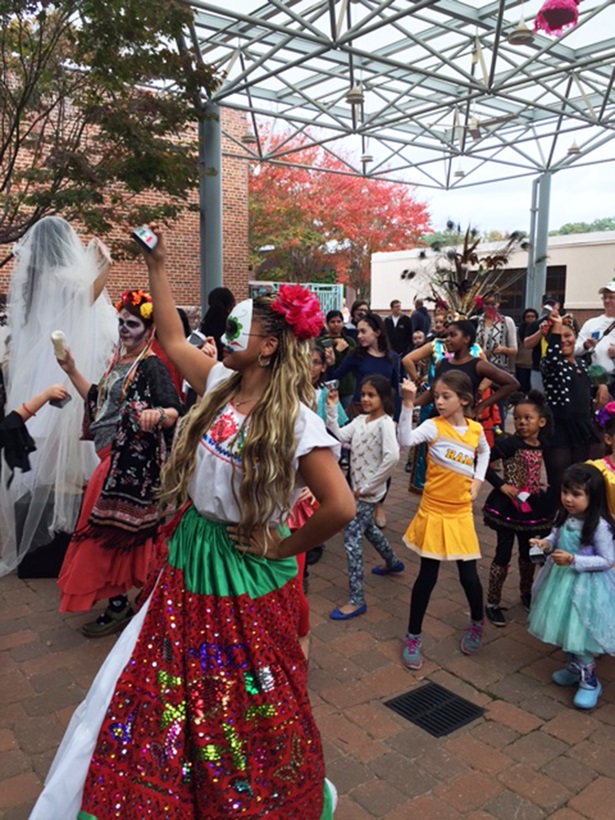 King elaborated on the origins of the Aztec celebration of Day of the Dead, and it began with the observation of the monarch butterfly migration. Monarch butterflies are located all across the United States in natural habitat, but when the winter comes around, the butterflies migrate south to one location.

“Monarch butterflies migrate from across to the US and they travel to Michoacan, Mexico in the winter,” she said. “It is said that these butterflies carry the spirits of our loved ones on their wings, and when they arrive in Michoacan, Dia De Los Muertos begins.”

The 2017 Dia De Los Muertos Fiesta held a special place for all dancers of the Latin Ballet. About two weeks ago, dancer Ivana Lo Piccolo passed away to a battle with lung cancer, and King and the Latin Ballet paid tribute to her life by creating an altar to her that was on display throughout the entirety of the festival. 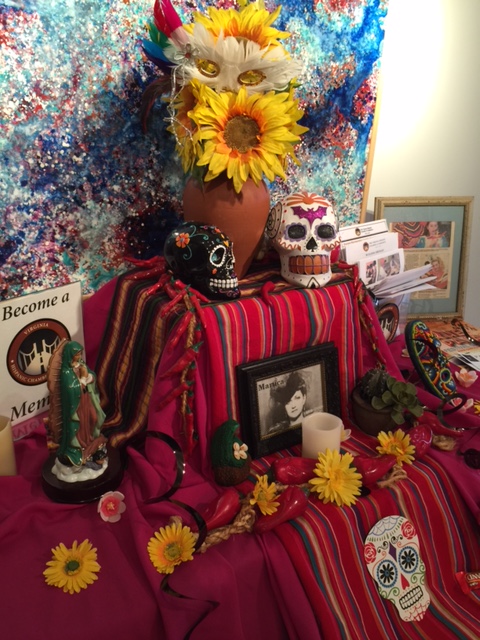 “We adorned her altar with pictures in ornate frames, marigold, and a dress of hers that I had kept for some reason.” Because of the holiday’s holistic tradition, she was able to dance with her friends again,” King said.

If you missed out on The Latin Ballet’s Dia De Los Muertos celebration, you can celebrate with Richmond’s 12th Annual Halloween Parade presented by ALL THE SAINTS THEATER COMPANY tonight. Dress up in a costume, make your own giant puppets or flags, and head out to the corner of Main and Laurel streets at 7 pm tonight to help celebrate the times and honor the dead.

And on Nov. 1, Casa Del Barco will host their annual Day of the Dead celebration with food and drink features as well as an authentic Dia de los Muertos altar. The restaurant and tequila bar will be holding an Instagram contest running all day long for a chance to win a $50 gift card to Casa del Barco.

​“We don’t trust the Federal Government, it shows a total ineptitude for us,” said said Felipe de la Cruz Sandoval, a representative for the parents of over 40 children who went missing last fall in I
END_OF_DOCUMENT_TOKEN_TO_BE_REPLACED