On the opening track of his debut full-length album, Sweet Bunch, Andy Jenkins sings, “Man, I would love to finish the book, but I still have pages and pages of lines.” Lucky for us, his story as a singer-songwriter is just beginning.

Sweet Bunch was released June 15 via Spacebomb Records, and while the collection represents a new start for Jenkins, pages and pages of his writing are already out there. His name will ring especially familiar for anyone who has been scanning the liner notes of Spacebomb’s releases since its 2010 founding. You’ll find “Andy C. Jenkins” listed among the writing credits for each of label founder Matthew E. White’s solo albums to date, including White’s breakout debut, Big Inner, which introduced the world to the signature Spacebomb sound. It also introduced the hypnotic combination of White’s soft-spoken vocals, which draw you in, and lyrics that incorporate just enough mystery to keep you at arm’s length. To borrow a line from the Sweet Bunch title track, it’s “a beautiful place to be.”

Despite the second meaning of the name of Big Inner — spoken quickly, it sounds like you’re saying “beginner” — its songs felt powerfully ahead of the curve, reflecting a long history of White and Jenkins working together as a musical team. In fact, their friendship dates all the way back to a play Jenkins performed in while attending high school in Norfolk, Virginia.

“The full story is, he came to see a play at my high school that I was in, and he was coming to my high school the next year,” Jenkins recounted when we spoke over the phone recently. “But his girlfriend at the time went to the high school, and he [said], ‘I’m going to be friends with that guy,’ just from my dramatic performance [laughs]. And then we were in class together and just became buddies, and started fucking around with music [and] four-track [recorders] after that.”

Jenkins graduated high school in 2002 and went on to attend the University of Virginia. And while college geographically separated him from White, who enrolled at Virginia Commonwealth University after a short time at Old Dominion University in Norfolk, the two friends never stopped collaborating. Jenkins eventually moved to Richmond, where he set up a home base for Great White Jenkins, the band the two would periodically play in together until 2011.

His next move was a little further afield. “I did the whole teaching English thing for a year,” Jenkins said. “After I lived in Richmond for a few years, and after the Great White Jenkins, I went over [to Japan] and did that. It was great. It was a really cool experience.”

Nearly 7,000 miles from home, Jenkins still managed to plug into a familiar niche. “I kind of fell in with some kind of underground art and music folk over there pretty rapidly. Some people I know here knew people there… I got to see some of the whole Boredoms scene. OOIOO played — I saw them in Osaka, which is Yoshimi [P-We]’s band, so there’s a little bit of that. And my friend Norio [Fukuda] runs the record label/small press in Tokyo called Sweet Dreams. He puts out some bands that do a cool thing — more experimentally minded, but very pretty folk music. It’s a line of genre-blurring that’s not as much of a thing here. But in that little scene, it’s more normal, and people liked a lot of different things.”
It seems timely in retrospect that Jenkins’ musical map expanded globally in this way, just as Spacebomb Records was set to bring a growing Richmond scene to ears all over the world. Now, with four Matthew E. White releases in the rearview mirror, breakthrough albums by Bedouine and Natalie Prass as impressive milestones, and a game-changing boost provided by the label’s new partnership with Glassnote Entertainment Group’s Resolved Records, Spacebomb has set the stage for Jenkins to move into an expanded role. “It’s a new thing to be the focal point, for sure,” Jenkins affirmed.

“It just made sense to do this,” Jenkins added. “I wanted to do [Sweet Bunch] because I like making it and listening to it. I wanted to hear it, I guess, so that’s a reason to make it.”

It’s a transition that’s helped him grow his craft. He mentioned that writing and recording Sweet Bunch involved “thinking about the audience more, in a way, and then coming back to writing what I wanted to write for myself,” he said. “I feel like that’s stronger anyway.”

It’s also given him an opportunity to make a statement about what it means to be a singer-songwriter in 2018, not unlike what Sturgill Simpson and William Tyler did in the country context by titling recent albums Metamodern Sounds in Country Music and Modern Country, respectively. “I toyed with the idea of calling the record Contemporary Singer-Songwriter for a minute,” Jenkins said. “Just because I feel like that term has a very negative stigma in certain circles. It’s definitely not a cool term. But it’s very accurate to what I’m doing, and that first generation of singer-songwriters, when the term came into fashion, that’s just a great body of music that I love.”

Throughout Sweet Bunch, I hear parallels with the approach taken by that generation’s finest writers, who dug deeper to find inspiration not just in the exceptional, but also in the everyday. In the same way Carole King brought out the essential goodness of friendship and built a colossal chorus out of the understated idea of feeling like a natural woman, Jenkins makes an anthemic title track hook out of appreciation for the people around him. With a fitting guest vocal assist from Matthew E. White, “Sweet Bunch” declares, “All the boys are true/They are true as the wind,” and “All the girls are strong/They are strong as the sea.” 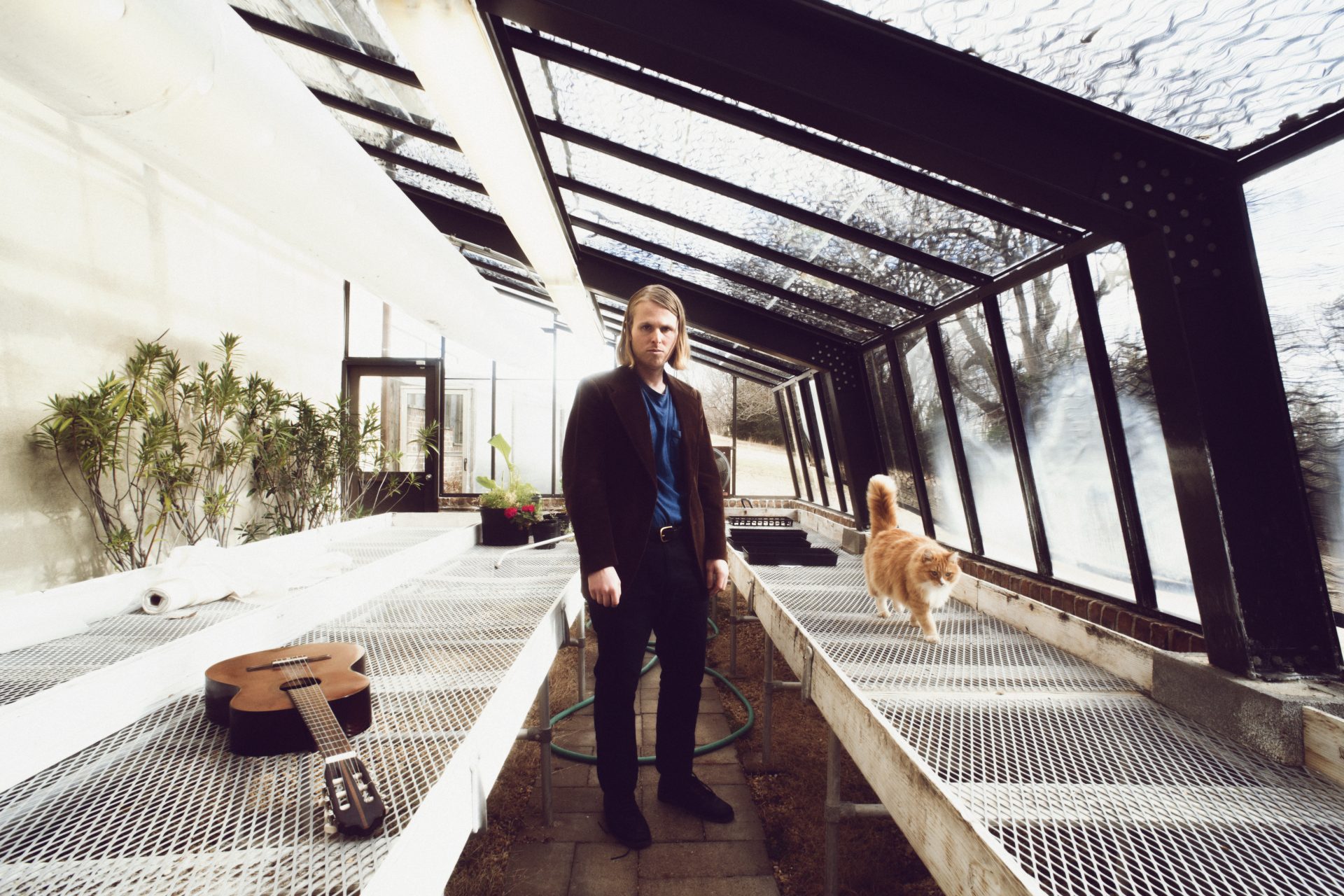 There and elsewhere, the lyrics echo the way in which the record was made. The band Jenkins turned to when tracking Sweet Bunch was made up of close friends from the masterful Spacebomb house band, as well as multi-instrumental heavyweight Phil Cook, who you’ll often find inspiring audiences alongside M.C. Taylor of Hiss Golden Messenger, when he’s not releasing and performing his own perpetually uplifting solo material.

“His energy and spirit were a great part of the sessions,” Jenkins said of Cook. “There’s a song we co-wrote, ‘Genuine Heart.’ I went down to Durham and I had that beginning of a song, and we finished it up and cut a demo that, parts-wise, is very close to what it ended up being. Particularly on that one, that’s a lot of his vibe.”

The results overall were as effective as they were efficient. “All the basic band, rhythm tracks were done in three days, and it was all live for the most part. There were some overdubs, but it was all that band, which was Cameron Ralston, Pinson Chanselle, Alan Parker — who are all Richmond guys — and then Phil Cook from Durham played keys… Those guys are all buddies of mine, so it was a lot of fun. The hang was good.”

That sense of closeness is clearly audible in the band’s playing, which is tight and sensitive in equal measure. And you can hear it loud and clear in Jenkins’ lyrics. The word “sweet” makes multiple appearances, beyond the album’s name and title-track; like in lead single “Ascendant Hog,” where Jenkins sings about “getting lost in the sweetness of your eyes.” But the album is far from saccharine. “Get Together,” which was co-written by White, offers a counterpoint, saying, “All the sweetness I run with was bound to slow me down after a time.” The variety of emotional contexts in which the theme comes back around allows Sweet Bunch to function as a layered meditation on the idea of contentment.

“I was conscious of repeating that word,” Jenkins said, “and I think it gets at what I wanted. I was feeling a number of different things actually writing the songs, song-to-song. [But] expressing a positivity that is more honest about what life is like is something I was trying to do. I feel like sometimes pop lyrics miss one or the other — too angsty or too positive, maybe. So I [was] riding that line a little bit.”

He walked that line with White’s expert in-studio advisement as producer. While the two have made music together since high school, recording Sweet Bunch gave them a chance to chart new collaborative territory. “It felt more like a natural extension than a change,” Jenkins said. “It was a new situation for sure. Him being the producer on my record was a new thing. We’ve recorded stuff in the past, but it was a little more casual. But it was cool for him to be in that role, having produced a bunch of stuff. It was nice. Not full-circle, but a continuation of the story.”

Jenkins was modest when asked about expectations for the album’s reception. But he did point to a moment that promises to be especially sweet: The arrival of freshly pressed vinyl copies of his debut full-length. He said, “I’ll be excited to get it and hold it in my hands.”

I feel the same way.