Andrew Lloyd Webber’s record-breaking 2015 Olivier award nominated musical CATS comes to Richmond direct from its sell-out seasons at the London Palladium. Adapted from TS Eliot’s ‘Old Possum’s Book of Practical Cats’, this “groundbreaking musical” (Daily Express) comes together in a sparkling fusion of music, dance and verse, and has now taken on a new life for a new generation. On just one special night of the year, all Jellicle cats meet at the Jellicle Ball where Old Deuteronomy, their wise and benevolent leader, makes the Jellicle choice and announces which of them will go up to The Heaviside Layer and be reborn into a whole new Jellicle life. With “timeless music, spectacular sets and a superb cast” (Daily Mirror), breathtaking choreography and of course the unforgettable ‘Memory’, CATS is a magical musical like no other. Let CATS thrill you once again, but don’t miss out on a seat – act fast and book your tickets today! “It’s the cat’s whiskers” (The Times).

Firehouse Theatre’s latest production of “Preludes” is a trippy musical fantasia that takes viewers on a journey through 19th Century Russian history to dive deep into the music and mind of suffering Russian composer Sergei Rachmaninoff, and the three-year writer’s block, hypnotherapy, and psychological collapse that befalls him after his disaster performance of his debut symphony in 1897.

Playwright and musician Dave Malloy, creator of Broadway hit “Natasha, Pierre, & The Great Comet of 1812,” has crafted an artistic piece that signifies the musical geniuses of the composer. The musical takes place in Moscow in 1900 in the hypnotized mind of Rachmaninoff, who is experiencing “creative silence” or writer’s block. It is often normal for writers to go through total silence of creative thinking when writing a piece; however, in Malloy’s musical fantasy  “Preludes”, the aforementioned writer is able to turn around his years of artistic silence into something great.

“We’re exploring a lot about taking a step forward and on a very basic level of getting out of bed and breaking free of the things that confines and constrains us.” Firehouse Theatre Director Billy Christopher Maupin said of the musical.

In the musical, Rachmaninoff, played by Travis West, is the concert pianist and simultaneously, the musical incorporates a modern-day  “RACH”, played by PJ Freebourn, who is paralyzed by writer’s block and constantly wallows in his own self-pity.

“Rach the modern day version, is the central speaking character of the play and the person whose story we’re following,” Maupin said.

Malloy’s way of driving emotion into this piece really makes people empathetic towards his work. His music and lyrics convey authenticity to the characters, situations, and struggles that they find themselves in. 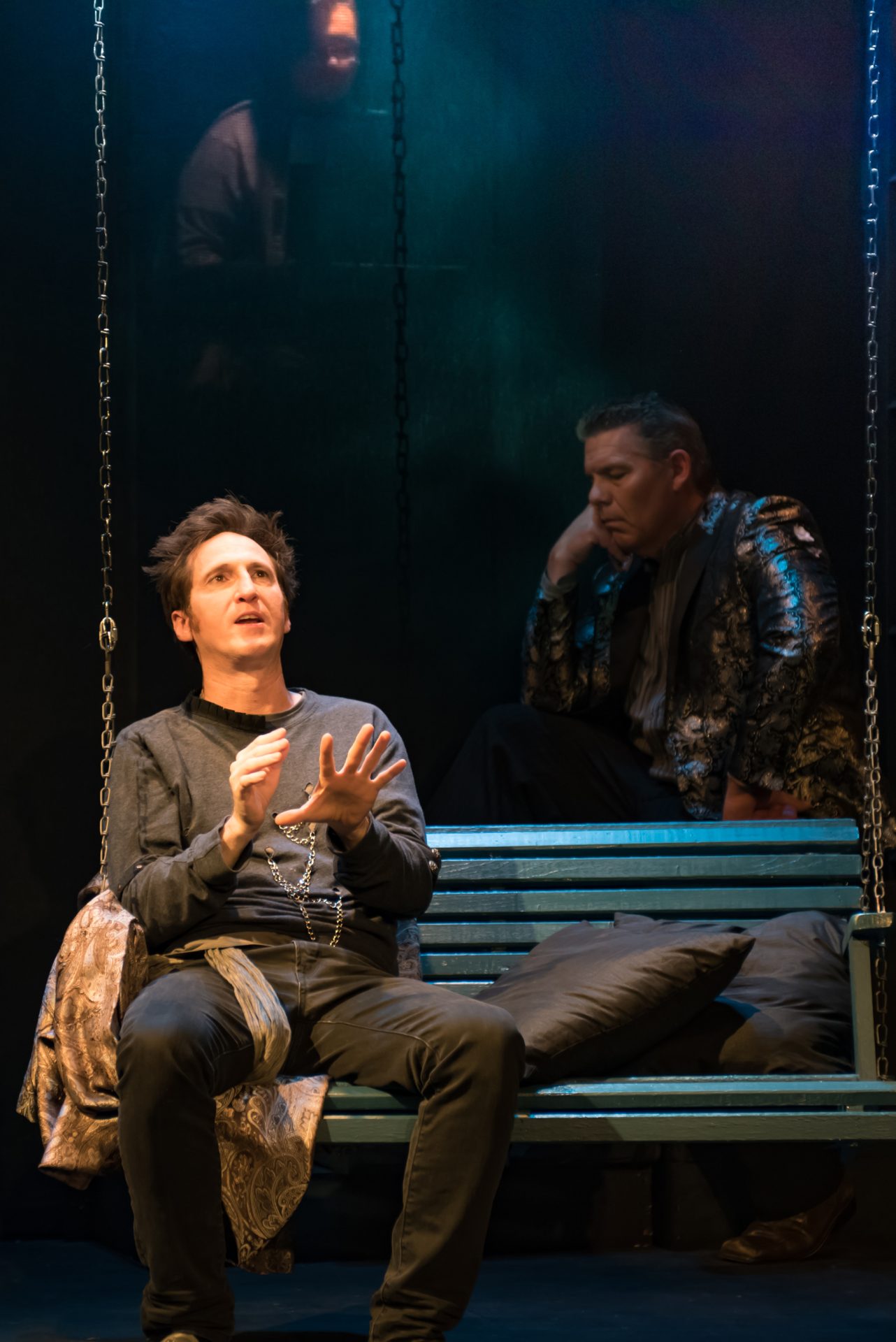 Rounding out the cast is Natalya, played by Isabella Stansbury, who portrays Sergei’s wife, and hypnotherapist Nikolai Dhal, who Sergei visits to recount his terrible writer’s block and sleepless nights at the request of Natalya. Dhal, who was originally written in Malloy’s musical as a man, appears in Firehouse’s Theatre as a woman, played by Georgia Rogers Farmer. Adding to the stellar lineup of actors and actresses is Jody Ashworth, playing famous Russian opera singer Feodor  Chaliapin, and RACH’s best friend along with actor Levi Merovich, who takes on several roles in “Preludes” including Rachmaninoff’s favorite composer influences Anton Chekhov, Leo Tolstoy, Pyotr Ilyich Tchaikovsky, Alexander Glazunov, and his main role as “The Master. ” 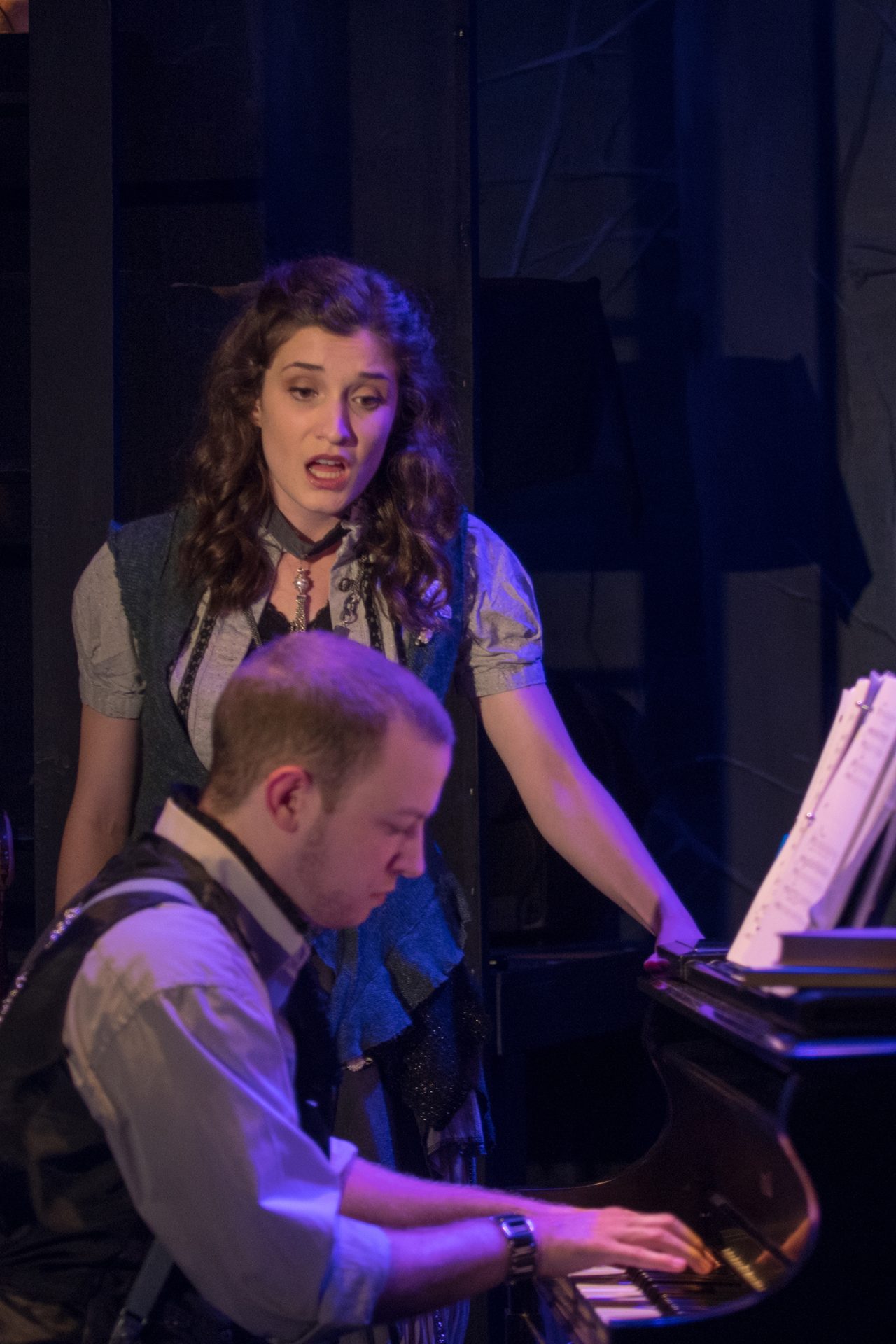 Meerovich, said his character “The Master” sort of exists “out of time.” According to him, he was able to tap into his own personal creativity to make that character come alive and had free reign artistically to develop him and make the part his own.

“It’s a very interesting part because it’s so vague that you can pretty much do whatever you want,” Meerovich said.  “And I make him very much me.” Because I have five other characters who are huge, other varying personalities, but this guy gets to just being me, which is nice.”

Maupin described the musical as “very strange, unconventional and gorgeous. It’s very eclectic in the styles and a lot of the music composed by Rachmaninoff, to which Malloy has added a set melodies and lyrics. In the musical, the audience will experience a menagerie of genres from klezmer to punk rock to Russian folk songs and classical music along with some Indian-inspired music. “Preludes” is orchestrated by a grand piano and two synthesizers despite a bit of electronic music that comes into play. The second synthesizer is played by music director Susan Braden. 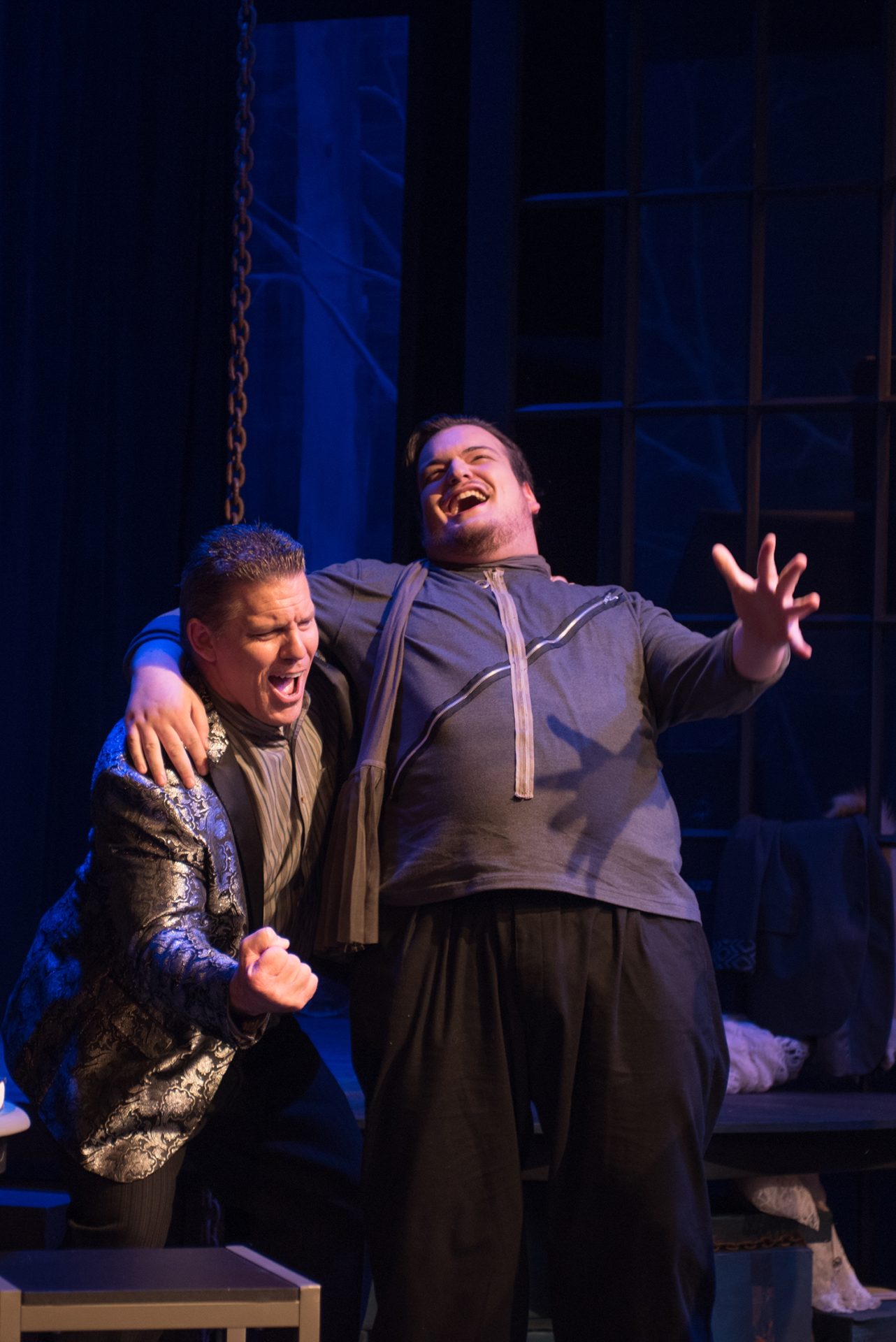 “It’s also a little fun and different for me,” said Braden. “This is an incredible piece with a bunch of incredibly talented people here from Richmond that’s gonna knock everybody’s socks off. And it’s strange and wonderful.”

Maupin hopes the audience leaves feeling “empowered, feeling and learning to, to move past things.”

Firehouse Theatre’s “Preludes” kicks off tomorrow, May 23, and will run through June 10. Tickets are $25 and can be purchased here.

The darker side of children’s fairy tales come to life in a VCU Theater department production of Stephen Sondheim’s Into The Woods, showing now until the end of April, at VCU’s Raymond Hodges Theatre.

Far from the Disney versions of our childhood, these fairy tales were first known to many as dark, disturbing stories by German brothers Jacob and Wilhelm Grimm–kind of like an early 1800s version of Netflix’s suspense series, Dark.

Fittingly, Alvaro listed another nostalgia-tinged Netflix smash hit as a comparable, saying his production “has a sort of 80’s Stranger Things feel to it. “We were inspired by Stranger Things and also the movie Labyrinth, it helped us build the world and find the aesthetic.” David Bowie’s The Goblin King meets the Duffer Brothers? Yes, please.

The storyline of Into The Woods concerns a childless couple who find themselves cursed by a witch until they can find the four ingredients she needs for her potion. Their apparent triumphs are quickly revealed as actual setbacks, highlighting a central theme of the play; nothing is ever as it initially seems, and many things are simply too good to be true.

The show in all will be broken up into two acts, Alvaro said, describing the first as setting the stage by placing everyone together. In the second act, the magic of fairy tales encounters the harsh reality of the real world.

“In act two we see what happens when fairytales go through real-life events, like the experience of loss, and what happens when something giant unexpectedly comes just when everyone thinks they’re good to go,” Alvaro said.

Runtime is around two hours and thirty minutes for the 27 member cast, and Alvaro said it’s appropriate for all ages despite the darker tones. “This show is kid friendly as well, so we encourage everyone to come along and see it, kids and everyone,” said Alvaro.

Into The Woods shows every Thursday, Friday, and Saturday at 7:30 PM for the rest of April, with Sunday showings at 3:00 PM.

Tickets range from $10-25 and can be bought online from VCU Theater’s website.

The aviation daredevils of the 1920s and 1930s forms the backdrop for Wings, the latest musical production from Firehouse Theatre. Emily Stilson, a former wing walker who defied death on the wings of a biplane, faces both her mortality and an accompanying language disorder after suffering a stroke.

Kerrigan Sullivan directs the work, adapted from Arthur Kopit’s 1978 play, with a novel visual approach to reflect the fracture between Emily’s mental and physical state.

“We’re exploring this sort of fractured mind, and that was just really, really fascinating to me,” Sullivan said. The performance uses a constantly shifting set, with music and visual changes that mirror Emily’s struggle to recover her voice.

The work takes place in two worlds, depicting both the physical facility that Emily recovers in and the vivid mental space where she relives the daredevil feats of her life as an aviatrix.

“One of the biggest things that I want people to take away is to see that there are other pathways to connection, even when you feel like you are leaving something behind,” Sullivan said. “You are moving toward something, and not necessarily away from it.”

Elens said that with a cast that small they wear a lot of different hats. “We’re all part of the set. We create the environments with our bodies and our voices. The five of us have to really be on our toes.”

As Amy, Emily’s clinical psychologist, Elens is Emily’s connection to her new world, overseeing her from the start of her stroke to her social rehabilitation. “She treats Emily like a human being, not a case study,” Elens said. “It’s about finding that humanity.”

“The biggest thing I’ve taken away from this process so far is whenever my cast comes to talk about different scenes, everyone has a personal attachment to someone in their lives that they’ve lost along the way,” Elens said. “Wings does such a great job of finding all the glorious things that the human brain can do, and all the things that can tear your heart out.”

Though the entire cast is crucial in shaping the on-stage universe, the world of the play is seen through Emily’s eyes.

“It’s a chamber musical,” Bryan said. “It’s telling this huge story but in a very tight, intense, intimate way. It’s almost like you step in as a part of the world.”

The audience sees the stage as Emily does. The voices of doctors, nurses, and Emily herself are sometimes incomprehensible gibberish. The set shifts and fractures, and even the musical refrain reflects the brokenness, beginning as a disjointed overture. It is the world through the lens of someone else’s experience, one that is vastly affected by a tragedy beyond her control.

“It’s an interesting way to see it, because musical theater is so presentational, a way of being able to distance yourself from it a little bit, but it’s inevitable, the story is going to suck you in,” Bryan said.  “To think this woman was basically cheating death her whole life, and now she’s had this stroke. It’s her story of how she’s coming to terms with death.”

The play touches on many issues, but Bryan said the most important theme was communication.

“Everyone will have something they can relate to. But I think the whole theme is really just the need and the want to communicate. [Emily] is not able to [communicate] because her speech is impaired and she can’t break across this barrier…I think it’s really just about making that human connection,” Bryan said. “There’s such a level of distraction in our society, but this breaks it down to the core…just communication.”

Firehouse’s community engagement manager Dave Timberline said Wings is a great way to start a conversation. In fact, he is using the production as a launching point to talk about strokes, aphasia, and theater production through Firehouse Forum, which supplements the onstage activity at Firehouse with a wide variety of additional programming.