When a band made up of four women names themselves Daddy Issues, you have to assume they know exactly what they’re doing. Put together in 2013 by singer/guitarists Lo Davy and Lindsey Sprague in the wake of some depressing breakups, the band seems to have been named after the kind of stupid accusations boys throw at girls when relationships are falling apart.
END_OF_DOCUMENT_TOKEN_TO_BE_REPLACED

If you’ve been even somewhat involved in the live music scene around RVA over the last few years, you’re surely aware of Hot Dolphin; this garage-punk group’s been making a name for itself around town with wild live performances and catchy tunes ever since its live debut in February 2012. However, their brand new EP, coming out tomorrow as part of the Negative Fun Singles Club, is actually their first vinyl release.
END_OF_DOCUMENT_TOKEN_TO_BE_REPLACED

The music of Hoax Hunters is fascinatingly hard to define in terms of genre. Their songs are a modern throwback to the sensibilities of east coast hardcore while engaging the ideals of persuasive indie rock from the eighties and nineties. The tunes feel like outbursts and require little to no time to get the message across. Hoax Hunters founder PJ Sykes is a student of these eras, but he is also an active participant in making sure their memory doesn’t fall to the wayside.

Sykes has been active within the Richmond music community for several years. His name may be mainly associated with his work as a photographer, but music has always remained on his mind. “My last band, A New Dawn Fades, was wrapping up, and photography started picking up. Music just got put on hold for a little while,” Sykes recalls. His photography showcases regional and national acts and provided a delicate emphasis on framing a live performance. An image of Lambchop is a fascinating demonstration of the energy that was channeled during their live performances, while an image of Mermaid Skeletons in a hallway at a house show indicates the preparation needed for an ensemble to take the stage. 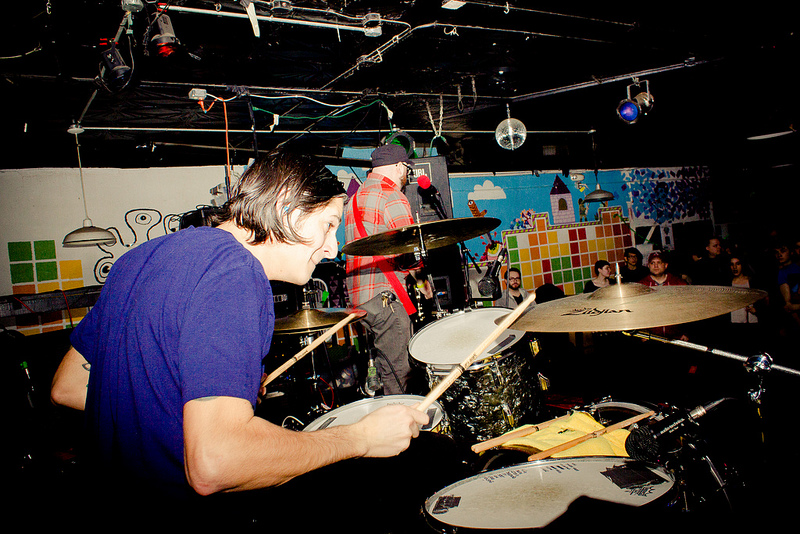 Another facet of Sykes’ participation in the local scene is through his label, Cherub Records. “I started the label as a way to put out music I was excited by, but it also proved to be a strong asset. If you submitted music to promoters or media outlets out of town, they were more likely to take notice if it was being sent from a label as opposed to just some random person,” Sykes explains. Through his efforts chronicling music through Cherub Records, he has released records by Graceland Grave Robbers, Baby Help Me Forget, Timothy Bailey and the Humans, and Kids Techno, as well as his own personal projects.

Sykes’ attention to detail, indicated in his photography, eventually emerged as a renewed desire to make music. “I reached this point where I thought about things I wanted to do in my last band and how I could pursue those. One of those ideas was writing songs that I could potentially play guitar and sing simultaneously. Which I know sounds like it wouldn’t be a challenge, but coming from a weird instrumental duo, it certainly was,” Sykes says.

Hoax Hunters began with a demo for the song that eventually gave the project its name, a quick jaunt that blazes by with furious guitars and shouted vocals. In many ways, the song explains Sykes’ aspirations for this band. “A lot of what I write about isn’t your typical boy meets girl kind of stuff. It just doesn’t seem relevant to me. I think about things in a much larger sense, and even if I write about something that could be construed as arbitrary; there is a personal meaning behind it,” he says. There is a sense of importance to the idea of uncovering a hoax, and that idea is represented not just in the band’s namesake song but several of their tunes. “Glitterbomb,” an ode to the act of publicly showering someone with glitter, takes its name from an act commonly performed against political candidates who oppose same-sex marriage.

“In The Background” is an even more curious tale. Years ago, Richmond natives White Laces performed at Lynchburg’s Rivermont Pizza. The show’s controversial outcome resulted in a great deal of discussion, and this Hoax Hunters song further chronicles the experience. “That particular song is just about being a band and finding yourself [turned into] background noise. You go there with the intentions of performing, but [when] you get commanded to turn down your amp and just be further ignored, [you end up] feeling like you don’t really belong,” Sykes says. 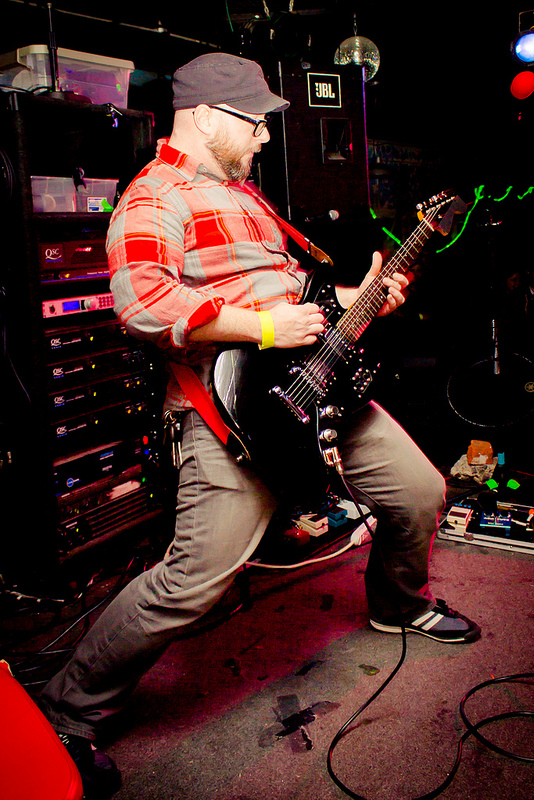 Beginning the group by making solo demos, Sykes soon began searching for musicians to round out the lineup. To call it a journey would be an understatement. “There have been several different versions of Hoax Hunters, but I think that’s kind of a cool thing. You may have a record or a demo or a seven-inch that represents that moment of the band, but when you go see us live, it’s completely different depending on who is on stage performing these songs,” Sykes says. The list of bandmates that Sykes has commandeered for this project include former and current members of bands like The Color Kittens, The Diamond Center, Hot Dolphin, Baby Help Me Forget, Flechette, The Snowy Owls, Tyrannosaurus Awesome, Canary Oh Canary and several others. Considering the reputation Sykes had garnered over the years as an active participant in the local scene, it’s not that shocking that he was able to draw from an all-star rotating lineup of bandmates to help flesh out the Hoax Hunters material.

The moment that solidified the band as a unit came with the release of a split with The Snowy Owls for Record Store Day 2013. At the time, Hoax Hunters’ lineup featured Tim Falen on bass and James O’Neill on drums. “The two of them joining the band is funny, because I didn’t know them all that well. We became good friends and probably better musicians as a result of our involvement in Hoax Hunters,” Sykes recalls. The split featured the tune “Orbit,” which was the first glimpse at this version of the band. With a solid rhythm section locked in, Sykes was able to focus on musical ideas that would eventually become their debut full-length, Comfort & Safety.

The band’s first album provides a look at their entire history. “We put out an EP before the seven-inch, but that feels more like a demo at this point. [Almost] all of those songs appear on this full-length anyway,” Sykes says. Entering the studio earlier this year, they worked with engineer Allen Bergendahl for this concoction of tunes, and the finished product is a strong statement indicating what makes Hoax Hunters a true outlier in this city. “Breathe” is the band at their most melodic, yet it still has the crashing, chaotic aspect that can elevates the best Hoax Hunters tunes. “Six/Five” is one of the strongest tracks on the record with it’s disjointed rhythm and showered influences throughout. Even the earlier tracks like “Hoax Hunters” and “Riskless Business” feel fresh as performed by this lineup. 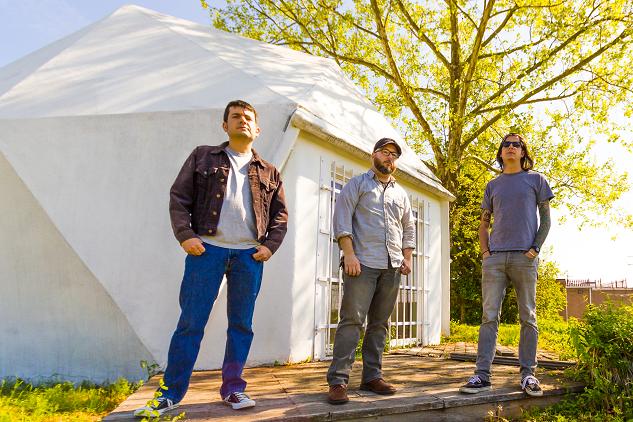 During the recording process, Falen reached a point where his available time for the band was reduced, and he had to depart. “Tim leaving was under the best of terms. He made himself available to record his parts for the album, and I totally understood,” says Sykes. Better known for his drumming in local bands The Diamond Center and Hot Dolphin, Falen had taken on a different instrument in Hoax Hunters, and Sykes was glad to have given him the opportunity. “What I liked was just giving him a chance to play bass. When he joined Hoax Hunters, that was a big part of it. He didn’t really want another band where he would be the drummer, and I’m glad Hoax Hunters could be that band for him. Even if only temporarily.” Ben Nicastro replaced Falen in the group. “Ben seemed like the best choice, and it just fit smoothly,” Sykes says.

In the coming months, Hoax Hunters will see the release of Comfort & Safety by Raleigh’s Negative Fun Records, in collaboration with Sykes’ own label. “We are working with some really great people that want to make the record have the best run it can. We’re all really excited to see what happens for the rest of the year,” Sykes says. Despite his past difficulties with maintaining a steady lineup for the band, Sykes has never let that deter his efforts. “This started as me writing songs at home, and has become something of a chameleon in many ways,” Sykes says. “I like the idea of having that separation between what you hear on record and what you see live. For as long as this band is around, it’s exciting to think of what experience someone will have when they listen to a Hoax Hunters record. It’s what excites me as a music fan.”

This article is taken from the Summer 2014 print edition of RVA Magazine, out now! Look for copies available for free at your favorite local Richmond businesses. To read a digital version of the full issue, click here.

Local indie-rock band Positive No have made a strong and, um, positive impression on the Richmond scene ever since they started playing out, and their debut EP, Via Florum, was one of the best releases to come out of RVA in 2013 according to our own Shannon Cleary (and he’s right). Now, the first new song since the band’s debut EP proves that they’re not content to settle into a formula, instead pushing the boundaries of their sound to create some of their best work yet.

END_OF_DOCUMENT_TOKEN_TO_BE_REPLACED

RVA noise-rockers Hoax Hunters have been building up to the release of their debut full-length, Comfort & Safety, for quite a while, but the wait is almost over–the album will hit the streets next Tuesday, August 5.
END_OF_DOCUMENT_TOKEN_TO_BE_REPLACED

Raleigh, NC’s Negative Fun Records has really been feeling the RVA love lately. In addition to releasing the upcoming LP from local noise-rock trio Hoax Hunters later this spring, they’ll also be including not one but two RVA bands in their 2014 Singles Club roster.
END_OF_DOCUMENT_TOKEN_TO_BE_REPLACED