Rage RVA is bringing the “rage room” concept to life locally, letting you smash plates
with baseball bats to your heart’s content.

Your boss just trashed your proposal, your significant other dumped you in a text, you forgot to take your dog out and she trashed your house, you stubbed your toe… there are a million reasons why you need to get some aggression out. And Nicole Cline, owner of Rage RVA, has the perfect solution.

As of January 2019, Rage RVA is the official place to de-stress and make a mess for all Richmond residents.

“Everyone has things in their life that they deal with, and sometimes, people need a way to release the emotions they’re feeling. The Rage Room is a safe outlet for that,” said Cline. “Even as adults, we can’t act on some of our emotions at the time we experience them. I believe that RageRVA gives people a safe place to go, where they can let it all out without judgement.”

At Rage, you can pick from tools such as hammers, crowbars, and baseball bats, which you can use to smash an incredible amount of plates, as well as printers, office grade copiers, and TVs.

“People seem to really love breaking the plates and cups,” said Cline. “Many customers have said that the sound that a plate or cup makes when it hits the floor or wall is the best part of their session, and the reason they add on crates full of them.”

And as far as what they smash things with? “People tend to go for the baseball bats.” 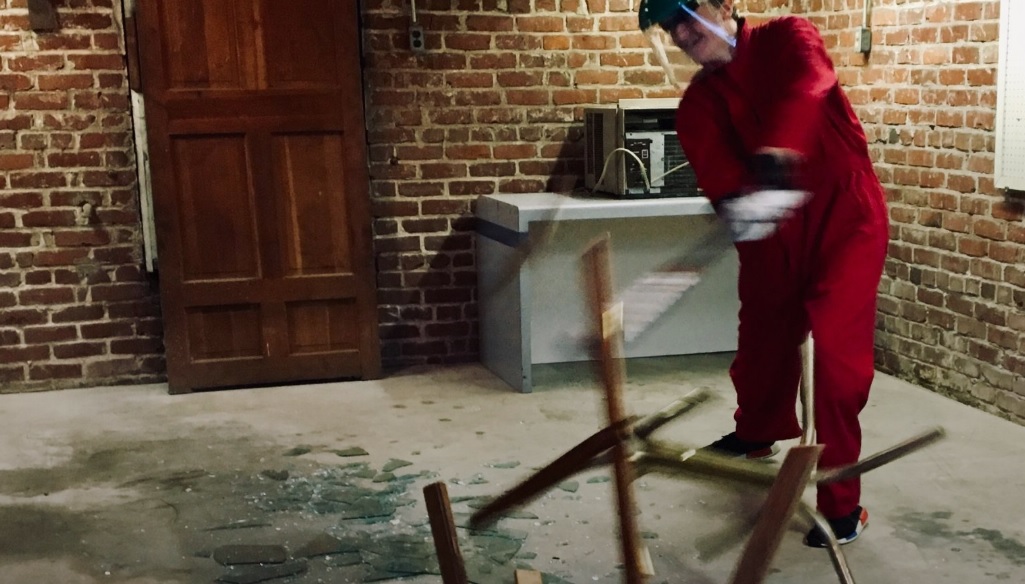 Within their first month of operation, Rage RVA clients have already smashed and destroyed almost 1,000 items. To find these items, Cline goes to estate sales, landfills, and recycling plants, giving the things she finds a second (much shorter) life. Following each smash session, Rage RVA employees go through the room, sorting out all the materials and recycling as much as possible, then turning the rest over to landfill.

“We also look for mixed media artists, to work with some of our more interesting breakage,” said Cline.

Cline went through many, many business ideas prior to coming across the idea for Rage, most of which stemmed from her love for animals — and many of which never made it beyond the concept phase.

“Some of the best were: freshly prepared healthy dog food tailored to dietary needs, dog ice cream, and an indoor dog park,” said Cline. “I couldn’t afford to take risks.”

After spending time in South Carolina, and working multiple jobs to support herself and her son, she picked up everything and moved to Richmond for the love of the city and the love of her now wife.

“After a few visits I fell in love with Richmond, too,” said Cline. “I loved the diversity, the festivals, and the people who live here. It seemed like the perfect place to start over.”

The idea for Rage RVA came to her after watching a show that featured a similar business in Denver, Colorado.

Currently, she spends her days working as the executive chef for Good Shepherd Episcopal School and spends her evenings at Rage RVA. Her chef job at the school ends early in the day, giving her the freedom to spend time with her son after he gets off school and still make it down to Rage RVA to open up for sessions at 4 p.m..

Cline takes pride in running a business that is not only her own, the fruit of over a year of work, but that also provides the Richmond community with a safe place to find therapy and fun.

“I have used the Rage Room myself and find it therapeutic. At the same time, it’s also a lot of fun!” said Cline. “As one of my customers said, ‘This is something you were never allowed to do as a kid growing up.’”