Alqemy Debuts on BET’s Tales in Sync with Relaunch

It was a Tuesday night after 9 PM when Brendon James first heard that his streetwear label had made it on TV. The news came after a hard year of marketing for a relaunch of the label, but it wasn’t a relief.

“I was annoyed, excited, confused,” he said, talking about his reaction to the vague message from his sister. “She was at work, and she texts me just, ‘I think I saw one of your shirts on TV!’” He wanted to know more, but the two wouldn’t be able to talk until the next afternoon, at which time they had a conversation that still didn’t answer his questions. 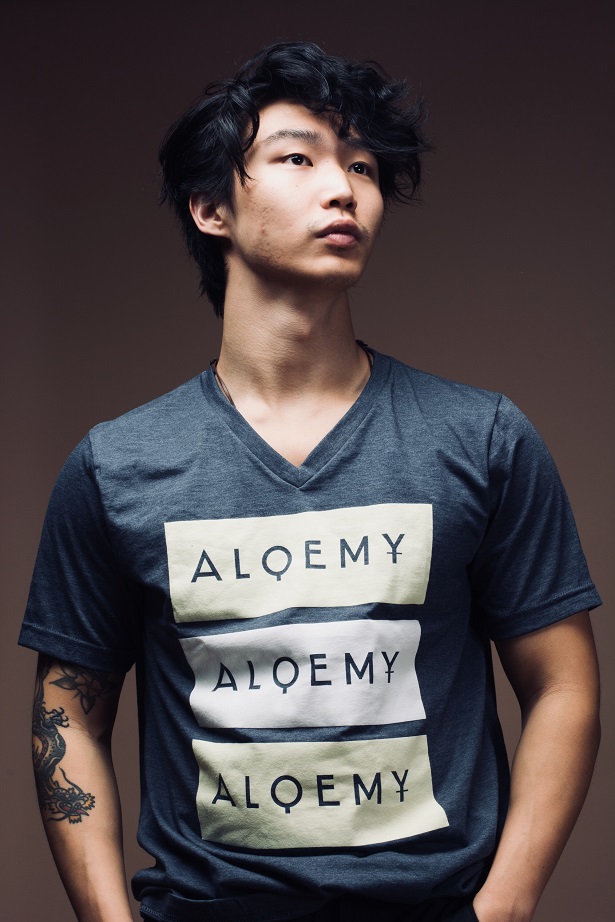 “She didn’t remember the name of the show, just that it was on BET, and she kept saying it was a white shirt with my logo. I didn’t make a white shirt,” he said. A little web research provided some encouragement. The timeslot on BET was for Tales, an original series by Irv Gotti that tells new stories based on classic hip-hop tracks.

Gotti was one of the many influencers James had tried to reach during his marketing campaign, but he didn’t know if he’d gotten through. He finally got to enjoy the news when he saw a web highlight of the episode, which featured Moonlight star Jharrel Jerome wearing an Alqemy shirt. “The episode was in black and white. The shirt isn’t white, but it just looked like it was,” he said. “It was like Christmas morning.”

Alqemy’s September relaunch was James’s second attempt with the company, one which came after a lot of reflection on an earlier, unsuccessful attempt in 2015. “That didn’t go so well because I put the cart in front of the horse,” he said. “I had done no real marketing, and I had no quality control in terms of my manufacturers.” 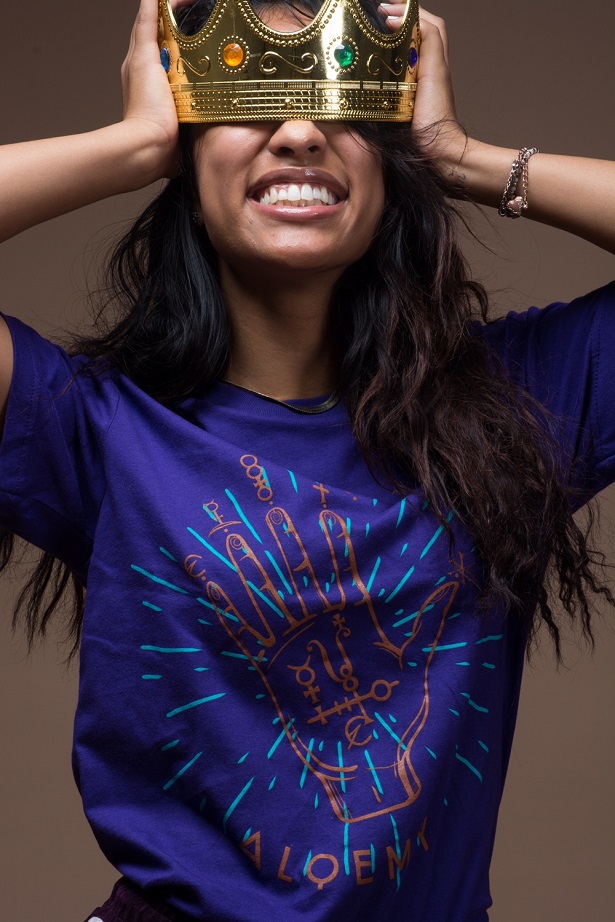 His earlier experience made him want to start smaller and closer to home. Haberdash, located in the Fan, prints his shirts and tags. “I love being able to pop in and talk with them whenever I need to,” he said. “At some point, we may outgrow them, so it’s a big learning experience working with Haberdash. When we work on larger production, I’ll know a lot about what things to do and what not to do.”

The name Alqemy comes from James’s fascination with the science of bringing things together. As a metaphor, it spoke to the concept behind his clothing. “Now more than ever, we need to band together as one people,” he said. “If I can use whatever platform to promote that, I’ll do that as much as possible.”

Amid the onslaught of last-minute election ads, Handyma’am founder Bella Weinstein was carefully watching two dates: the 7th and the 21st. The first marked the end of a historic campaign for Virginia women running for political office, the second, the end of a successful fundraising period for her feminist clothing line.

Weinstein raised $50,000 through crowdfunding, netting $10,000 over her goal, to fund the production of a new and improved version of the coverall she designed as part of her burgeoning clothing line. Handyma’am’s focus is on garments for women who work, inspired by the long history of women in trade work and the need for functional, well-fitting clothes for tough jobs. 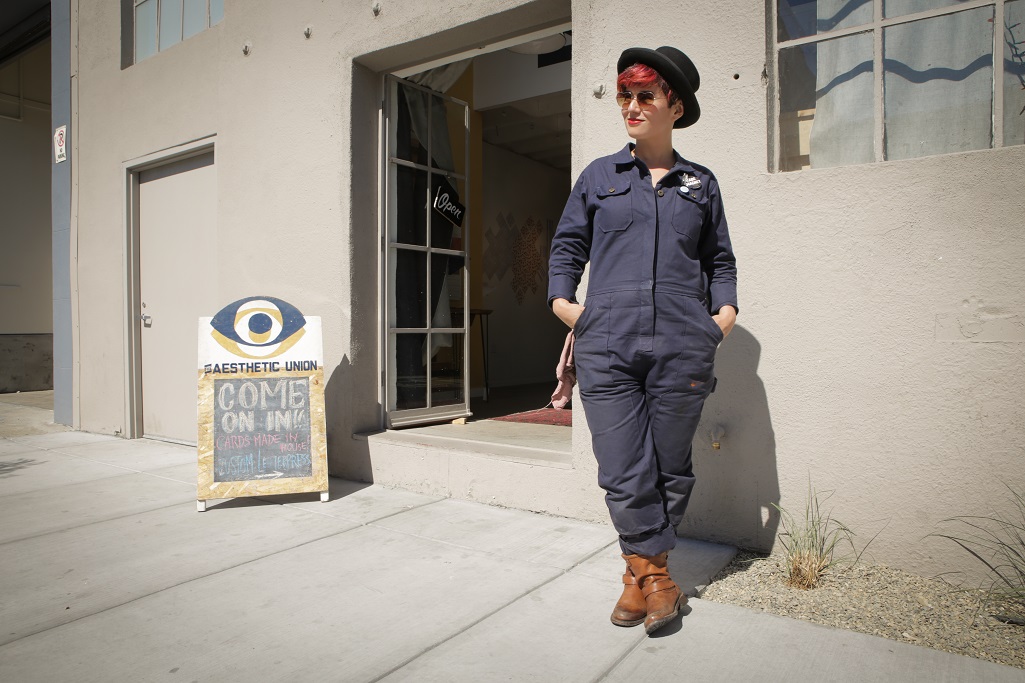 “They’re meant to empower,” she said of her latest garments. “Whether you are a painter or welder as a living, or if you work in an office but you are interested in doing something on the side, I want you to feel like a superwoman when you put on the coverall. I know I do.”

Weinstein personally wears, washes, and dries each garment she creates for Handyma’am before they hit the market. She also sends items like coveralls and the “Drapron” out to farmers and other women who get dirty professionally, or as a hobby.

“I was driven by a combination of loving jumpsuits, working with my hands, and being unable to find quality, durable clothing for women,” she said. “I didn’t have experience in fashion, but I had a community of women I knew and wanted to support, and I had drive.”

Weinstein works with technical designer Shaeffer Hatisma to bring her ideas to life. Features include cinching at the waist, pockets, and slimming silhouettes, all in thick, durable fabrics. The durability made it a challenge to find reliable production in the United States, but this is a problem Weinstein has recently solved.

“This year, we’re making it real,” she said, referring to a US-only production strategy that includes women-owned textile shops in Portland, Maine and New York City. She often travels north to check-in on the New York production, but loves being based in Richmond, where she lives with her husband, James Lum, co-owner of JM Stock Provisions.

Weinstein plans to grow and expand her business, citing a need to support other trades and body types. She also wants to do more philanthropy. She’s not looking to open a storefront, though; her focus is on national growth, aided by pop-up shops and online sales, without the distraction of running a physical space.

“Some people are so freaked out about going into a stuffy jewelry store,” said Spell, the Creative Director of Nine Roses, describing the vision behind the boutique decor.

The collection is modern–imagine delicately crafted skull-shaped gold rings and dainty precious gems set in curvy, nature-inspired designs–but the materials are traditional and the results high end. Prices start around $100 for earrings and run as high as $3,000 for engagement rings and custom pieces.

Engagements are a big part of the business. To make a potentially-stressful time more accessible, the wife and husband teamwork with couples on custom pieces, running the gamut from original work to placing heirloom gems into modern, trendy settings. They also offer an online blog for proposal-ready men and women covering style basics and details on diamonds. 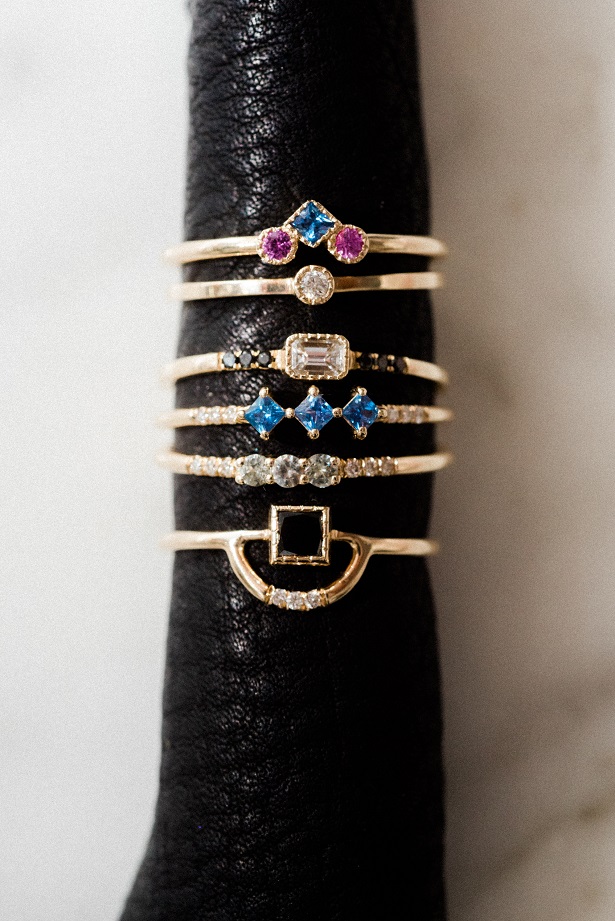 They carry a number of designers in-store and online; the selection is thoughtfully curated. “We won’t do business with people who do things the wrong way,” Spell said. “We prefer to work with small businesses.” 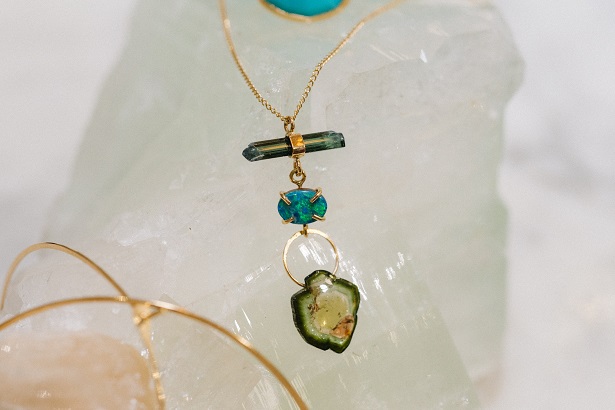 This will be their third year in business, a milestone Spell credits to connecting with customers and being transparent. “There’s a different level of trust that goes into the relationship you have with a jeweler,” she said.