I spent the weekend in Durham, NC, at a festival devoted to the synthesizer and some of the best acts from the show are stopping in RVA tonight. It’s also gonna help if you like terrifying noise music.

I’m gonna run down Moogfest in the next week or so (as I am still recovering) but one of the stand out acts, NYC’s Pharamakon (top image), should 100 percent be on your list of shows to see this year and tonight is your chance.

At the ripe age of 27, Margaret Chardiet (AKA Pharmakon) has created a fascinating and horrifying soundscape that has garnered praise from publications large and small. While it’s not something I find myself causally listening to, her latest record, Contact, was released a few months back and finds connections to some of the deepest, darkest industrial sounds imaginable.

This noisy mess of rage and terror was hard for me to imagine live; I figured she’d be latched to a series of pedals and synths occasionally screaming into a mic. Sure enough, I wasn’t far off base, but the production and clarity of sound helped cultivate a truly unique expereince and she also found time to mill about the crowd, check out a short clip from her Moogfest show below:

Up next on the bill is a band that needs no introduction for long-time fans of noise or experimental music: Wolf Eyes (image below), the seminal Detroit-based project featuring Nate Young, John Olson, and Jim Baljo, has been rattling spines and ear drums since the mid-90s. Their sound has changed, but the mission seems to have stayed the same – horrify and confuse. 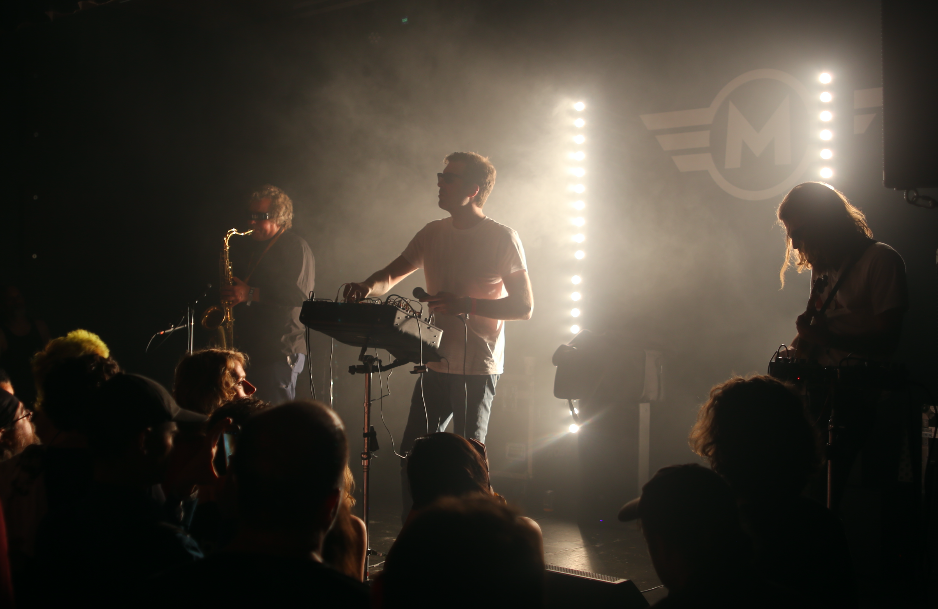 And their live shows similarly run the gambit of high energy off-tune beats and fuzz to more mellow tributes to noise-scapes as an art form. If and when you want to talk about noise music, being abel to say your “saw Wolf Eyes once” is certainly a notch in your belt.

They’ve been to RVA in the past year or so, and that show was solid, though a bit too mellow for my tastes. Meanwhile, their Moogfest show this weekend offered a more upbeat (?) rendition of their sound. Check out a short, noisy clip below:

Other acts on the bill include Providence, RI, Container, and RVA’s own Coteries, both of whom I’ve caught before and have enjoyed – but all of this requires and ear for the terrifying so if you’re up to start your week on a rough, atonal note, snag tickets here and head to Smatter tonight.