Kim grew up on the west end of Richmond, a young girl with big blue eyes living in the nice part of town — bad things didn’t happen to girls like her, not in the suburbs.

By 14, though, she had started experimenting with weed and alcohol. As a freshman at Hermitage High School, Kim moved onto bigger and better drugs. Forget her school colors of red and blue, she’d found white — in prescription opiate pills and powdery bleached cocaine.

At 19, her mother dropped her off at a twelve-step program in Richmond. She walked in the front door and straight out the back.

Kim started shooting up heroin. Her biological mother had died of a heroin overdose weeks before Kim was born, but those things didn’t seem to matter at the time. Kim was addicted. There was no choice but to leave her family, leave her life behind. Until July 8, 2010.

Kim was living in a recovery home with 13 other women, sandwiched between one addict reading from the bible and another woman blasting Eminem. It was then that she decided she’d finally had enough.

So she got help, and she got out. Today, she works at the Virginia Center for Addiction Medicine (VCAM). Unfortunately,  not everyone’s as lucky as Kim, though. Only two weeks ago, President Trump declared the opioid crisis plaguing the nation a public health emergency, and the number of opioid overdoses has only increased since then.

“Every three weeks, 3,000 people die from this opioid epidemic,” said Chantal Thompson, a representative of VCAM. “There’s a 9/11 that happens every three weeks. Think about that. Every three weeks, the same number of people who died on September 11, 2001, die in the US because of an opioid overdose.”

And yet, doctors regularly prescribe opioids for pain relief. According to the Virginia Department of Health, 1,268 people in Virginia died in 2016 from overdosing on opioids. 465 of those deaths were caused by prescription opioids.

With statistics like these, it’s  important to know the science behind the drugs. Moreover, it is especially important to question why doctors are prescribing opioids so willingly in the first place, knowing the associate risks.

“The number, the recklessness, with which doctors have started prescribing opiates began in the late 1990s,” said James Thompson, the CEO of VCAM. “Traditionally, doctors were careful not to overprescribe opioids because of the risk of addiction.”

A movement generated by concern for those suffering from chronic pain, Thompson said, changed the way doctors prescribed opioids for good. “People were living longer and surviving diseases, but then going on to live lives of chronic pain,” he said. “So doctors began routinely prescribing opioids for pain.”

According to Thompson, doctors were also encouraged by pharmaceutical companies like Purdue that released self-funded studies in the 1990s, suggesting that the risk for opiate addiction was not high, not for patients that were truly in chronic pain.

Opioids, the drugs in question, are all derived from the natural opium poppy. The old standby derivative is morphine, and morphine has been modified to make products such as codeine and heroin. Then there are the synthetic opiates that are similar to morphine molecules, like oxycodone, hydrocodone, and hydro/oxymorphone.

“What happens is that opioids, after they are administered inside your body, they bind to something called a receptor, which are proteins usually found on the membrane of a cell,” said Shannon Jones, a biology professor at the University of Richmond. “They are able to recognize different substances and activate specific pathways that create a response in the body by activating specific genes.”

In the case of opioids, after binding to the receptor called GPCR, the opioids recruit a protein within the pathway called a G-protein. These G-proteins can affect either an activating or an inhibitory pathway.

That’s why prescription opioids became so popular with both doctors and patients during the opiate movement — they block out our biological capacity to feel pain at all. Sore limbs, old wounds, nagging toothaches; it all just fades away.

Thompson, as a young doctor in the early 2000s, experienced this shift firsthand. “When I was in medical school, we were kind of taught that if we were underprescribing opiates, we were undertreating pain and that we were basically guilty of malpractice.” He went on to say, “In the past, some opiates were prescribed only for brief periods of time after injury or surgery. It was rare to have someone prescribed opiates for a long period of time. By 2001, it became okay to give someone who had something as common as say, arthritis or fibromyalgia, a prescription for lifelong opiate use.”

All this may seem like a gift for patients with arthritis, migraines, and other diseases that cause chronic pain. Underneath the pretty wrapping paper, however, is something far more sinister.

“There are three types of opioid receptors in our bodies,” said Jones. “Two of those receptors lead to pain relief. One of the receptors overstimulates a pathway that can cause respiratory depression — it slows down your breathing.”

And that’s where, Jones said, the danger of overdosing lies. “You’ve slowed down your breathing so much that you could die,” she said.

So opioids have become the quintessential example of a double-edged sword. No pain, no hurt, but an extra pill or two slipped unthinkingly into the back of your throat could leave you breathless.

Despite this, hospitals and medical practices in the 1990s continued and still continue to prescribe opioids daily, all across the US. Why? Because along with moral motivations to eradicate pain, doctors also had a monetary incentive to keep prescribing opiates.

“This movement began to grow at around the same time hospitals and medical practices began using the internet to get feedback,” said Thompson. “There were people who would give bad reviews to doctors who weren’t joining in on the prescribing frenzy.” 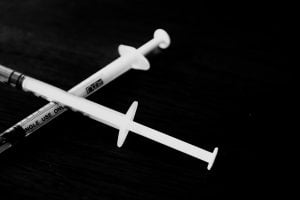 This paradox is explored famously by Sam Quinones in his book, Dreamland: The True Tale of America’s Opiate Epidemic.

In his book, he describes this situation, “Our desire as American health consumers to have an easy solution to a complicated problem has played a role in the opioid crisis,” he said.“Sometimes pain is only fixable if you, as a patient, do a lot of the work yourself but we as a country, culturally, have not made those choices.”

It is Quinones’ opinion that doctors have come to rely on prescription drugs because of the relative ease of prescribing a pill as opposed to suggesting that the patient work out, eat better, sleep better, drink more water.

Undeniably, the saturation of opiate prescriptions in American society is alarming enough when all you are considering is the threat of overdose — but there are still more layers. Opioid addiction, which has devastated the lives of so many, is another risk that looms ominously over our heads.

In November 2016, Governor Terry McAuliffe released a statement declaring the opioid crisis a public health emergency. According to the press release, in the first half of 2016, the total number of fatal drug overdoses in Virginia increased 35 percent from 2015, and fatal drug overdoses became the number one cause of unnatural death in the state.

One of the most popular opioids, Percocet, is a combination of oxycodone and acetaminophen. In 2015, more than 4 million Americans reported abuse of oxycodone-containing pain relievers like Percocet.

Musicians across the US have been waxing poetic about the inconceivable high these drugs give you for years, but what does that high really entail, and why is it so addictive?

“Biochemically speaking, synthetic opioids mimic natural opiates your body produces, like endorphins,” said Jones. “These opioids bind to the reward pathways in your brain that bring about that feeling of euphoria commonly associated with these drugs.”

According to Jones, opioids have the highest rate of addiction out of any drug group in existence.

When you take an opiate, your body is flooded with the drug, and your cells try to cope with the onslaught– they pull their receptors away from the surface so that the opiates can’t bind and create their effect, a dangerous mix of euphoria and breathlessness.

Jones explained this further, “Drug users will take more and more drugs, trying to achieve the high they had the first time they took an opiate.” He also explained how taking opioids is about diminishing returns, once your body’s cells have adapted and become desensitized to the drug, “still, people keep trying and trying anyways, constantly chasing a high they’ll never feel again.”

It’s the reason drug cartels buy heroin from processors that make it out of morphine and mix it with powerful synthetics like fentanyl. Because, in Thompson’s experience,  it makes for an attractive product — and addicts with hollow eyes and bruised veins will come from all over, will search for the powerful high born from a mixed, street-made drug that has caused many an overdose.

It’s also the reason that Thompson will have weekends in Virginia when he ends up with a bunch of overdoses caused by the same product, sold by the same person, to people just trying to get their fix.

“Your brain informs you of your decisions constantly, whether you’re conscious of it or not, and it is a powerful learner,” he said. “Using opiates over and over changes the impulses and drives you have. It can make it so that your desires, wishes, goals, they all revolve around the drug. Even if you can’t admit that to yourself.”

Still, Thompson has made it clear that the solution to this nationwide opioid crisis does not lie in banning the drug. For him, education, not restriction, is the solution.

“About half of the patients I see started out being prescribed opiates for a medical issue, and quickly became addicted from their first exposure,” he went on to say. “That doesn’t mean doctors should never prescribe opiates — it just means we should help people to better understand the risks of addiction and that doctors should be more mindful of what may happen if they prescribe opioids.”

In October, US Senator Tim Kaine introduced a bill that would invest $45 billion into prevention, detection, surveillance, and treatment of opioids. Should the bill pass, it would also include nearly $5 billion for substance abuse programs in individual states from 2018 through 2027.

Over the last few years, focus on policies concerning the opioid crisis has expanded exponentially, both nationwide and in Virginia specifically. In an exclusive interview with RVA Mag, Attorney General Mark Herring discussed his efforts over the years to curb the epidemic, and provide the public understanding of opioid addiction that Thompson advocates.

“I have known from the very beginning that this is not a problem we are going to solve with arrests,” Herring told Landon Shroder, RVA Mag’s editorial director, in the interview. “Many of our drug policies of the past have not worked well and we need to take a fresh look at [the issue]. Drugs are not going after one particular demographic. It isn’t an urban, suburban, or rural problem. It’s happening everywhere.”

And according to Herring, Virginia is trying its best to solve the problem everywhere — it is part of a 41-state investigation into pharmaceutical manufacturers, to see if they are engaging in any unlawful practices regarding their marketing and distribution.

“These drugs are incredibly powerful, and devastating the lives of so many families,” Herring said. “The opioid crisis is a national tragedy and a problem that is decades in the making — and it has its roots in the medicine cabinet much more than it does in the streets.”