In this era of worldwide climate change, environmental education has become more important than ever. Over the past 50 years, scientists have observed increasing occurrences of summer heat waves, winter freezes, tornadoes and tropical cyclones that have devastated our earth. Experts have recorded warmer and more acidic ocean waters, a pattern of global warming and grave disturbances in the habitats and ecosystems of our planet.

Still, there is hope where there is knowledge. We can mend the global issues plaguing our planet — but we must first understand the damage we have done. We did some investigating to see how related programs here in Central Virginia address this need.

“We’re going in the right direction, but the future holds a lot of different pressures — one of which is not being aware of your own environment,” Nat Draper, Education Director of the James River Association, said. “That’s one of the reasons environmental education is important. If you’re not aware of how humans have had an impact on the environment, you can’t take steps to fix it.”

So how does Richmond’s public education system measure up? Rising ocean temperatures, global warming, flooding, pollution — how do Richmond schools inform students about these issues?

With Richmond’s proximity to the James River, and the pressing global consequences of climate change, it has become increasingly important to ask these questions. The answers, though, are often disappointing.

“For K-12 education, some states like Maryland require that students take a course in environmental studies before they graduate,” Draper said. “Virginia requires finance classes and so many other courses, but we don’t require environmental education. That’s something we should consider in the future.”

Climate change, according to new and stronger evidence presented in the third U.S. National Climate Assessment, is a product of human activities — particularly the burning of fossil fuels and the subsequent release of greenhouse gases, which trap heat in the atmosphere and in excess have led to a gradual global warming.

Chris Weigard of the Citizens Climate Lobby, a non-profit group focused on national climate change policies, is also a strong advocate for environmental education. He emphasized, in particular, the importance of awareness among younger generations.

“People my age, in their 60s, are not going to have to deal with the most extreme consequences of climate change in their lifetimes,” he said. “Young people will see more, and their grandchildren will see more. Global warming is a cumulative issue.”

According to the third climate assessment, climate change will continue until our kindergarteners become college students, and will only escalate with the continuation of human activity that burns fossil fuels and releases heat-trapping gases.

For many, this is a difficult burden to bear. Climate-change denial continues to exist in the U.S., and with the impending withdrawal from the Paris Climate Accord by the federal government, it has begun to gain traction once again.

This ignorance is not singular among politicians — the JRA, Richmond’s most prominent environmental group, gears most of its programs toward children and teachers, but has found that many students lack any environmental knowledge at all.

In places like the Florida Keys, fishermen, locals and park rangers face the eventual flooding of islands sitting just one foot above the water — day by day, they watch as the tree-filled hammocks of Big Pine Key are infected with saltwater, bleaching tree limbs white and destroying wildlife. And yet, only 57 percent of Floridians are somewhat worried about global warming.

Amy Moore, an environmental science teacher at Deep Run High School, has taught in classrooms from inner city Richmond to rural Virginia. For Moore, this pattern of ignorance is something she has observed for years.

“There are enough people who don’t know anything about the environment,” she said. “They’ve never been educated — because so many people have never even taken a course on any sort of environmental topic. They’re completely in the dark.”

Moore also underlined the vicious cycle of miseducation in Virginia, which circles endlessly from parent to child, generation after generation.

Stephen Nash, a renowned science journalist and visiting senior research scholar at University of Richmond, believes that by moving toward alternative forms of energy and actively educating and engaging citizens, our planet has a chance to become healthy and whole again.

Right now, we are undergoing global changes that threaten human health with low air quality, low water quality and extreme weather. These changes have impacted agriculture, economy and the naked infrastructure of our society, menaced by rising sea levels that continue to swallow our land. It is essential to understand this. “We must inform the public so it can make decisions that will help us move towards sustainability,” Nash said.

Societal sustainability — whole countries acting through an environmental consciousness — can only be achieved through widespread education about global changes, according to Nash.

The sad reality for Richmond public schools is that money and level of experience, unfortunately, separate schools that are able to provide a comprehensive environmental education from those that are not. 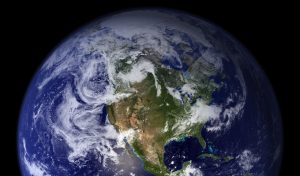 “You have to have resources for many of these things, unfortunately,” Moore said. “The east end of Richmond versus the west end of Richmond is very different. Many teachers at other schools simply don’t know the [science] material that well.”

Deep Run High School offers seven environmental classes and eight biology classes. It has the highest number of students taking AP Science courses in Henrico County, and is one of wealthiest student bodies in Richmond and Henrico’s school districts, with a reduced price lunch rate of just 5 percent.

Highland Springs High School, on the other hand, has a free/reduced price lunch rate of 64 percent, and test scores, year after year, fall far below the state average.

“I taught in Highland Springs  for four years… they were some of my favorite kids,” Moore said. “They were very, very difficult to reach. I never saw a single parent for parent-teacher conferences when I was there. The students–you really had to get their attention. They had so many other things in their lives going on, school was their last thought. A lot of them had children themselves. But when you could get their attention, they would work really hard for you.”

Indeed, Richmond educators have not given up, despite outside limiting factors. Although public schools in Virginia have a long way to go, teachers with passion and drive continue to do their best at inspiring and informing their students about environmental issues.

According to Moore, a colleague at Highland Springs has started a GoFundMe for her environmental science class of just eight or nine very excited students, who signed up to learn all about the environment.

The James River Association has also received half a million dollars from the National Oceanic and Atmospheric Administration as part of a 3-year grant, to provide professional development for all sixth and seventh grade science teachers in Richmond middle schools.

The group, formed in the 1960s, gained a passionate following after the governor at the time declared the James so unsanitary and unhealthy that he shut down the entire river.

For years, the JRA carried on the grueling process of cleaning up the river, making the James safe to swim and fish in again and, most importantly, educating the public about pollution and the environment.

The grant will fund a program called “Experience the Park,” coordinated with Richmond schools and the JRA — it will include in-class visits to all 1700 sixth grade science students.

A field experience will bring all students to study watersheds at the beloved James River, the center of recreation, tourism and beauty in this blossoming metropolis. Ask any Richmond resident, and they’ll tell you how much they love the natural beauty of their river city. The JRA hopes to create a Richmond where every citizen, beginning with these sixth graders, works hard to ensure that future generations can say that for a long, long time.