This past Saturday, youth led marches to demand an end to gun violence in all 50 states. RVA Mag had teams in Washington D.C. for the national event, and another at home in the River City, where students from local high schools led more than 1,500 from Martin Luther King, Jr. Middle School over the Leigh Street Bridge to the steps of the Virginia State Capitol. Youth from the Armstrong Leadership Program kicked off the Richmond event and shared the stage with invited speakers like Superintendent Jason Kamras, Mayor Levar Stoney, and Sen. Tim Kaine.

Up in Washington D.C., over 500,000 gathered for a rally on Pennsylvania Avenue, blocks from the Capitol, to represent the national movement and urge lawmakers to pass legislation banning both the sales of weapons used in mass shootings along with high-capacity magazines, and to close loopholes in America’s background check system.

Some of the best photos of the day can be found below:

Over 500,000 people braved the crowds in Washington DC today to attend the March for Our Lives rally planned by student survivors of the shooting at Marjory Stoneman Douglas High School in Parkland Florida on February 14. The shooting, which left 17 of their classmates dead, has promoted student activists like Emma Gonzalez and David Hogg to national prominence as leaders of the Never Again and Enough is Enough movements. 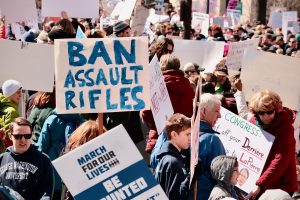 The rally today, five weeks after the shooting in Parkland, was organized chaos of the best kind. People from all over the nation flooded the streets, holding signs, chanting, and listening to the stories of survivors of gun violence. Tension mounted throughout the tragic stories until the first Parkland survivor took the stage. “If you think today is good just wait for tomorrow — the future looks very bright,” Cameron Kasky said to a transfixed audience.

Not long after, a hush fell over the crowd as a video of the harrowing news reporting from February 14 was played for the crowd. After Kasky spoke, the rapper Common came out and performed a song for the audience. While there was a celebrity contingent in attendance, including Miley Cyrus, Ariana Grande, Jennifer Hudson, and others, one of the speakers was quick to remind the crowd that this was “not Coachella”.

A group of students who had travelled from Miami spoke to RVA Mag. Among them was 18-year-old Alice Roayer, who said, “People like me and people my age are being killed and injured and I feel that’s not right.” She continue, “…the march here today is going to bring awareness to how angry we are. We need to make a change and this is just one step towards it.” Roayer also commented on how it was important for people of color to be represented at the rally, reflecting criticism by rally organizer David Hogg who recently said , “The media’s biggest mistake while covering the shooting was not giving black survivors a prominent voice.” 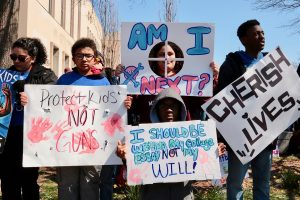 Another student in Roayer’s group, Trey Burrows, said he came out for representation. “I think it’s important to march here today to clarify that when we say ‘march for our lives’, okay, well whose lives are we marching for,” said Burrow. He told RVA Mag that in his community gun violence is a daily occurrence, saying, “In 2016, 255 kids died from gun violence, yet I did not hear a story about that, I didn’t hear media coverage about that. My community is crying out, we need help.”

The speakers at the rally were diverse and not limited to the student survivors from Parkland. Survivors of gun violence from Sandy Hook, Columbine, and Chicago were also on stage, providing an inclusive environment that focused on more than just white victims of gun violence. D’angelo McDade, a speaker representing young people from Chicago, spoke to the crowd about the everyday problem of gun violence in his community, “Shootings are an everyday problem. I am here to speak on behalf of everyone who’s been shot and killed.” 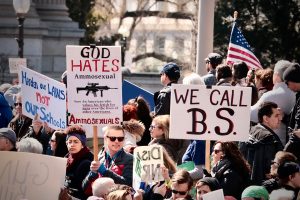 Registering voters also played a critical role in the rally today with volunteers swarming the streets and metro stations encouraging people to “vote them out” in the upcoming midterm elections. Peninsula Voices for Change (PVC), a Hampton Roads non-profit traveled via bus with members, allies, and affiliates to show support, not only for the victims of gun violence, but to raise awareness.

Their director and founder, Cassie DeSena-Jacobs, spoke with RVA Mag about their organization and why they traveled to participate in the rally. “I think that in the last 14 months there have been so many explicit things for PVC to get involved with, but this feels like a no-brainer,” said DeSena-Jacobs. “Registering to vote and attending elections is what’s going to bring change. But, having massive numbers attend marches is what’s going to make us feel hope right now.”

While there were many intersections present at the rally, there was an admirable presence at the event different from the other massive demonstrations since November 2016: Young people. They are who will be voting for the next generation of lawmakers and having current lawmakers see the vast numbers of people who came out today has the ability to directly affect policy.

Two women aged 20 and 22 who attended the rally from Maryland spoke to RVA Mag, choosing to give only their first names. “Someone has to stand up. I’m glad there’s a lot of us here today,” Hannah said. “Change doesn’t happen without the people.” Her friend Samantha echoed the sentiment, urging all young people to get involved. “You can sit at home and do nothing or you can actually make a change,” she said. “The government needs to understand how much this matters to the people.”

As the event winded down the overall atmosphere was somber but optimistic, with people vowing to fight for awareness and change. One of the speakers towards the end summed up the spirit of the young people advocating for the change needed to end the epidemic of gun violence throughout the US. Yolanda King, granddaughter of Martin Luther King Jr, paraphrasing her famous grandfather, said, “I have a dream. That enough is enough.”

Today in Henrico, students of Douglas S. Freeman High School participated in the National School Walk Out. The walkout was a way for students nationally to remember the 17 lives lost at Marjory Stoneman Douglas High School in Parkland, Florida a former student murdered seventeen of their classmates on Feb. 14. The walk has also served as a call to action to implement stricter gun control.

As the walkout proceeded, students held signs and stood out on the baseball field for 17 minutes while the names and stories of the Parkland victims were read as each minute passed by. “Turnout was massive, we probably had about 500 to 1,000 students which just shows how united and coordinated we are,” said senior Maxwell Nardi, who met with reporters at the end of the event.

Students at Freeman High have been particularly vocal about participating due to multiple shooting threats made against schools within the district. Nardi, one of the student leaders behind Freeman’s walkout told NBC12  on March 9,  “We’re relentless in solving this, and that’s why we are going to get it fixed.”

“This is the America where politicians and leaders prioritize lobbyists and money over the lives of kids,” wrote Nardi in a recent opinion piece for the Richmond Times-Dispatch. “This is the America where we’re told that we’re too young to have a say, and instead that we should shut up, ride along, and hope we don’t get shot, waiting for the adults in the room to do the job.”

The students at Freeman have had one of the biggest voices when it comes to advocating for gun control reform and the activism that accompanies it. Along with their peers from Marjory Stoneman Douglas High School and other student activists nationally, they presented themselves as smart, aware, and capable of discussing the nuance of the issue.

Molly Harring a student at Freeman spoke to RVA Magazine after the march. “I really think that our generation as a whole is one of the driving forces behind this movement. It’s really inspiring to see my friends all get together behind something that we feel is important,” she said.

This was also reinforced by Nardi, who told reporters, “We’re not going to stop until people make real changes.” He went on to say that how having to practice active shooter drills has instilled a sense of camaraderie with students all across the US. “We’re together in this. We all have the pain and the understanding of the victims in Parkland and across the nation.”

Parents and teachers were also involved in the walkout and commented on how they feel about their children participating. Angela Maggie, a mother of a student at Freeman, who was present at the walkout said she supported her daughter Kennedy and was beaming with pride as she spoke of her daughter’s activism and participation.

“I am extremely proud– extremely proud,” said Maggie. “I think we do need increased background checks to ensure that our schools are safe.” Maggie also expressed how she would still support her daughter 100 percent even if the school did not support the walkouts.

“My son will be exercising his 1st Amendment right. We’ve had discussions about it and this walkout will be a teachable event,” said Hutchinson. “We plan on building support for common sense gun reform using the momentum built through this movement.”

Director of Communications and Public Relations for Henrico County Public Schools, Andy Jenks, also commented on the school board’s support for the walkout.

“Our vantage point was acknowledging their beliefs and wanting to be supportive of their ability to stand up for what they believe in but then trying to figure out how we can do that in a safe manner and one that finds the learning experience,” said Jenks.

With the ongoing national discussion of arming teachers – which will simply bring more guns into an already volatile mix – there has been contentious reactions. Henrico County Public Schools teacher Rebecca Field recently wrote an editorial for WTVR where she expresses her thoughts and emotions on the subject. “How dare you force me to choose between my own children and those that I teach,” said Field. “How dare you allow powerful adults who love guns to be more important than a generation of children growing up in fear.”

While it is met with fierce opposition from many students, parents, and teachers, Jenks and the school board simply put that they do not have a comment on the issue as of right now. However, when RVA Mag asked Nardi what he thought of arming teachers was short and to the point —

“No,” he said, before walking off and rejoining his fellow students in class.