It was March 22 when the corner of a particular flyer hanging outside the Longwood Landings apartment complex caught my eye on the way back to my car. My heart started racing, I was furious. I couldn’t believe white supremacy propaganda had made its way onto my college campus.

Displaying the Nazi Eagle emblem, the flyer carried the phrase “Resurrection Through Insurrection” in black with a web address at the bottom, leading me to Texas-based white supremacist organization, Patriot Front, whose website bears the Nazi slogan “blood and soil”, a chant which resurfaced in the summer Unite the Right rally in Charlottesville.

Without a moment’s hesitation, I ran to the pole and tore it down- white supremacy has no place in any public space, let alone on Longwood University’s campus.

As soon as I removed the flyer, I took a picture of its insidious message, blasting it out Twitter, Instagram, Snapchat, and Facebook. I made it known; however, the university remained silent. The day the flyer went up and the few days that followed, no student-wide email was sent, no Facebook or website announcement was posted addressing the issue, not a peep. And it was deafening.

On April 4, President Reveley finally issued a statement in honor of Martin Luther King Jr. on the 50th anniversary of his assassination. The statement itself attempted to touch on the self-proclaimed “inclusivity and diversity” on campus, but doesn’t directly mention the flyers or the condemnation of them. 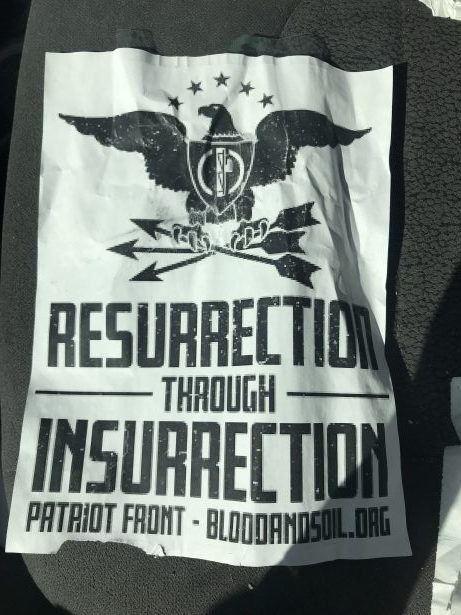 “Sadly, 50 years after that terrible day in Memphis, divisive hatred is in the world still. It can manifest itself anywhere, even in the sanctity of our own campus,” writes Reveley. “When that happens, we embrace Dr. King’s hopeful message all the more, and reaffirm the values of dignity and respect for all that we share and that define our community.”

Justin Pope, Longwood University Chief of Staff and Vice President, stands by President Revely’s statement, and in his email to RVA Mag, he gave his take on why the administration themselves have yet to provide a statement. “Longwood’s response has been to communicate to students through the SGA about the issue, and for President Reveley to share with students, faculty, and staff an affirmation of our values of inclusion and diversity, and our bedrock commitment that every student feel supported, safe and welcome in our community,” said Pope.

The same day as President Reveley’s email, the Student Government Association (SGA), who held a meeting on the incident April 3, released this statement on their Facebook and Instagram:

“The aims of these organizations are not consistent with the principles or work of a true citizen leader.” “Campus police are conducting an ongoing investigation and are always cognizant of campus concerns…”

Longwood Chief Robert Beach declined phone and email interviews and although, while respecting his policy, it is easy for one to assume that this is a PR dodge. A media platform outside of Longwood University spreading the word of the silence and the lack of action is not a good look for the department or the university. Beach did, however, speak to Longwood student paper The Rotunda, about the issue.

“The most significant thing for me is to make sure it is done legally and peacefully to support their right for the freedom of speech but also the right of the rest of the population to be able to live a peaceful life and get their education,” Beach said in the interview.

Chief Beach also told The Rotunda that the department had surveillance footage and “some leads on the person whose been doing this.”  In the recent meeting the SGA held, Beach simply told the SGA that they are “safe and secure” in regards to the flyer.

Although the SGA speaking out directly about the flyer is comforting, the other issue is where it was released. Why would one believe that a press release screenshot on seemingly low traffic social media be a useful way to inform the student body of these acts?

The issue with this, however, is the idea that rather than communicating with the entire student body on the issue, the administration only let the SGA do the talking instead of addressing the matter themselves.

Condemning white supremacy is not something to be admired or respected — calling out white supremacy is simply what is right in 2018. As white supremacy continues to grow into academic spaces and we have a responsibility to stand with our peers who these groups threaten. Furthermore, I am choosing to put myself on the line in order to publically call out my own university. Charlottesville is not even a year old.

Again — speaking out shouldn’t be this honorable act, it is something that should not be questionable. What is questionable, however, is why a junior in college, who should feel safe and secure getting her education, has to write this in the first place.

And this isn’t the first time that white supremacy has appeared on Longwood’s campus. Last March, flyers advocating white supremacy were posted by “The Order”, a white nationalist group that promotes a white ethnostate where Jews and other minorities would be barred from the rest of society. However, the administration seemed only to care that these flyers were not approved by the school, rather than the racist propaganda of the flyer itself.

Let that sink in for a moment.

White supremacist propaganda has also shown up around several other Virginia universities. Both VCU and ODU released statements in the past regarding racially-charged videos, posters, and even blatant nationalist groups advertising on campus. The difference between those, however, is that the universities actually acknowledged the issue and kept students in the loop by sending out emails notifying the students of the events and making it known that, although legal, is not condoned by the university.

Longwood University policy emphasizes that all posters must be approved by the Lankford Student Union. In response to last year’s flyers, Tim Pierson, Vice President of Student Affairs sent out an email to students Feb. 10, 2017 stating:

“In the last week, there has been an increase in the number of flyers and posters hung in campus buildings that don’t have approval. They were removed, as are all unapproved flyers. If you come across an unapproved flyer or poster, please report it to the Student Union Office.” 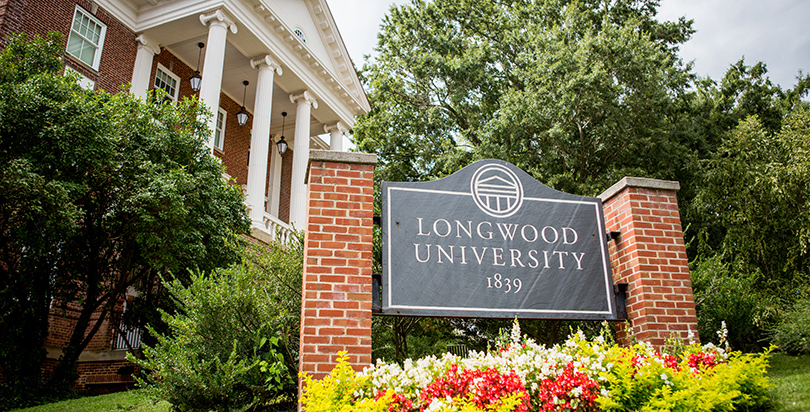 I interviewed Pierson in March 2017 and he emphasized the idea of free speech, rather than emphasizing the fact that hate speech is not going to be tolerated on campus.

When asked why the email sent to students regarding the flyers did not explicitly state what the content was, Pierson at the time had an interesting rebuttal. “The number one issue on this is that it wasn’t approved,” said Pierson. “We have to be careful about what we say.”

Yet the larger issue seems to be the obvious elephant in the room: The fact that white supremacists, or an individual with those ideals, was on our campus putting up hate-driven propaganda and the university failed to act.

Pierson also discussed the policy of approving posters and how that has the potential to impact students right to speech. “Those (posters) were approved on good taste,” said Pierson. “What’s good taste? Who’s good taste? You cannot do that. That really impacts free speech. We may hear things that we don’t want to hear. But if it’s not hate speech, that person has the right to say it.”

So let’s set the record straight, white supremacist propaganda that directly links to a website, which incites violence against minorities, is “tasteful” and does not qualify as hate speech? An interesting take which seems to still be relevant one year later.

The administration of Longwood University is not just failing their minority students with their silence, but all of us who care about creating an equal community.

Every day that goes by where they do not acknowledge these flyers is a day that they are putting their students at risk for being discriminated against. Not to mention the potential violence these groups may perpetuate. Once again, remember Charlottesville?

Matthew McWilliams, Assistant Vice President and Communications Associate Editor at Longwood didn’t return calls by press time, but told the Farmville Herald that the school’s “mission was to nurture citizen leaders.” “We are confident our students — regardless of their backgrounds and beliefs — know they are welcomed here,” he added.

It seems as though the university would rather push this matter onto students than dealing with it first hand. Their hope to create “citizen leaders” in this case seems to be a handoff for the SGA to do all of the dirty work when in reality, the administration will always have more authority and drive than the students.

The silence from the administration might as well be an “approved by Lankford Student Union” stamp. There is no good way to be silent and objective when coming face to face with white supremacy. You are either speaking against it or you are directly or indirectly supporting it. Longwood has proven to be indirectly supporting the group by refusing to speak against it.

This has been happening continuously with little to no denouncement from university officials. Will the school’s statement solve white supremacy on college campuses in Virginia? Absolutely not. Could this statement make the marginalized groups on campus feel more welcomed in a predominantly white university? Absolutely.

Regardless, the people at the heart of this matter are the students. The students who deserve a healthy and stable environment, not a campus that has three white supremacist flyers torn down within the span of 10 minutes. And I wasn’t the only one disappointed by the university.

“Honestly, the fact that they haven’t said anything says something,” one student told me, withholding their name due to potential reprisal.  “If you cared about POC students even a fraction you would say something. Silence is complicity.”

History major Lauren Gaines also spoke to RVA Mag about her experience finding the posters. “I saw ‘blood and soil’ and some white nationalist bullshit and tore it down while a Longwood employee cheered me on,” said Gaines. “A tweet or something like that from President Reveley hasn’t been sent out yet, but the possibility of a couch burning warrants acknowledgment.” Gaines went on to say she was disappointed Longwood had not formally addressed and condemned the white supremacy flyers. “At the very least to make students feel safer on campus.”

So, to the administration at Longwood University, I am disappointed and furious but still hopeful. Sometimes, all it takes is an email to make students feel safe again. I urge the administration to take the concerns of the students more seriously and not make light of these situations.