Undocumented students facing a threat of deportation by the Trump administration are finding support in Virginia Commonwealth University’s student organization PLUMAS, short for Political Latinx United for Movement and Action in Society.

The group sat down with VCU President Michael Rao in September to discuss the ways in which beneficiaries of the 2012 Deferred Action for Childhood Arrivals program, DACA, will be affected by the program’s termination in March of 2018.

The meeting took place the day after Attorney General Jeff Sessions announced that the federal government will be rescinding DACA, which granted legal status to almost 800,000 undocumented  immigrants who arrived to the United States as children. One of these immigrants is VCU student Yanet Amado.

“I’m a DACA recipient,” Amado announced to her fellow students at a PLUMAS rally. “Do I look different? The only thing that separates me from you is my legal status.”

Young undocumented immigrants enrolled in the DACA program, commonly referred to as DACAmented, were granted a social security number, a work permit and two year’s protection from deportation, among other benefits.

“One of the big benefits of being in DACA was being able to obtain a driver’s license,” said Amado, “without having to be scared of being stopped just because of a simple traffic violation and putting myself in danger.”

DACA benefits were also expanded in Virginia by the State Attorney General Mark Herring in 2014 to include in-state tuition for undocumented students. Now, Amado’s education in jeopardy.

The demands PLUMAS has made to VCU’s administration mirror the benefits that undocumented immigrants will be losing next year. The group is demanding continued in-state tuition and that VCU police do not cooperate with Immigration and Customs Enforcement officials.

PLUMAS public relations manager Hermie Jackson says the group’s meeting with Rao was a reminder that documented students stand in solidarity with DACA recipients, and that the potential deportation of VCU students is an issue that the school’s administration “can’t just brush this under the rug.”

“Right now we want to make sure that DACA recipients feel like they can come and talk to us,” Jackson said. “No one is going to judge them. Nobody is going to out them. Instead, we just provide them a space to talk.”

Following the conclusion of their meeting with Rao, PLUMAS held a rally on campus to “put pressure” on the school’s administration. PLUMAS President Ana Diaz Casos says the group “heard a lot of words” but it “would still like to see action.”

“We are hoping that VCU keeps its word,” Casos said. “Our priority is our community. These are things we’re demanding — that we really need — and that VCU has the power and authority to deliver.” 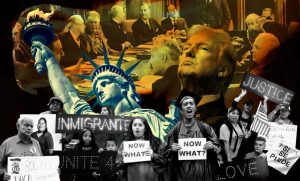 “The president of our university has stated that he will continue encouraging Congress to pass some sort of relief for DACA students,” Espinoza said. He says PLUMAS has “a very lucid understanding of what is going on.”

“I think the idea is to phase out DACA,” Espinoza said. “While at the same time presumably giving Congress a possibility of providing a permanent solution that doesn’t come from the executive branch.”

DACA was established by former President Barack Obama in June of 2012 by way of an executive order. The move was controversial at the time, but now Espinoza says there is no way to know “what the likelihood of Congress reaching some sort of agreement on this contentious issue is.”

He says many immigration experts agree that “this phasing out of DACA is just another aspect of a broader anti-immigrant stance” by the Trump administration. PLUMAS seconds this sentiment.

Espinoza says the termination of DACA impacts DACAmented students in three ways: First, it “stigmatizes” them by revoking their legal status and “turning them again into unauthorized immigrants, making them ‘illegal’ in quotation marks.”

Second, Espinoza says that terminating DACA “intimidates” undocumented students who have shared private information with their universities because “the fact that the Trump administration could potentially share this information with immigration authorities is intimidating in itself.”

Finally, Espinoza says the decision to end DACA “potentially marginalizes” DACAmented immigrants. He says this is why students such as those in PLUMAS “have really taken a very strong stance in defense of themselves.”

Because her DACA expires after the program’s termination date of March 5, 2018, Amado says she will not be able to renew her DACA and hold on to her work permit. Therefore, she will lose her current job and will not be able pursue a career at the state level, which was one of her goals after graduating.

Amado falls into the category of DACAmented immigrants who were not able to apply for a final extension by Oct. 5. She will lose her DACA benefits by March of 2018. For those who did manage to apply for an extension, they will lose their protections in two years with no chance to renew.

With the deadline for renewal applications of Oct. 5 recently past us, the phasing out of DACA continues.

However, Espinoza says  “there are several fronts” where PLUMAS, the VCU community and undocumented rights activists can keep combating the dissolution of DACA, including the judicial system and Congress. Regardless of what progress will look like, Espinoza says the efforts by PLUMAS are not in vain.

“I think it is realistic to change the narrative about what it means to be undocumented,” Espinoza said. “And to change how undocumented immigrants are perceived in the United States.”