Living an alternative lifestyle can be frustrating. Since your routines are not mainstream, or what others consider “normal,” wild myths and misconceptions spread. This problem definitely affects many members of Virginia Polyamory. The Richmond-based organization is made up of like-minded individuals who prefer non-monogamous relationships over having a single partner. Their philosophy is to build a social and support group for those who wish to be intimate with more than one partner, knowing that all parties are aware and consenting.

This is a far cry from the many assumptions people make about the polyamorous lifestyle. These members of VA Polyamory will help us separate myth from fact.

As founder and president of VA Polyamory, Leahy can often be found organizing potluck parties and beer socials with his organization, or hosting educational workshops for VA Polyamory on such topics as communication and polyamory 101.

“It provides connections between people to help normalize it — because [polyamory] can feel really weird or not normal when you’re not around it or not surrounded by it — and to help provide resources for people to learn and have better, happier relationships,” said Leahy.

Leahy established the group in June of last year, and it has already gained over 300 members from all backgrounds, identities, and personalities.

“I’ve been polyamorous for a decade,” Leahy said. “I decided it was really important for us to have something that was public-facing, something that could help bring people in who may not know there’s a community in Richmond, to help through education. We get a lot of role models for monogamy in life, but there’s not a whole lot of examples of polyamorous or non-monogamous relationships that work. It helps to learn from each other and provide support to one another.”

Leahy often hosts workshops explaining what it means to be in a healthy, happy polyamorous relationship and the importance of communication, as well as having an ethical relationship.

“We’ll all get together, and we’re kind of like a family unit,” Leahy said. “We’ll have dinner together and we make sure we’re all friends with each other, even the people I don’t date directly. […] I do what’s called a ‘kitchen table’ polyamory, where we’re all looking out for each other and trying to care for each other. It’s not about competing for resources or competing with each other for attention. It’s much more about, what does everybody need, and how can we provide that?”

One of Leahy’s partners recently went on a journey to Thailand with her own partner. Rather than be jealous of their time together, Leahy’s pod was excited about their opportunity to travel. Plus, while they’re away, they have a whole group of people back home who love and care about them, keep track of them, and make sure they get to their destinations safely.

“We see jealousy as a negative emotion, like anger. And you should make sure you have control over it, and it’s not ruling your life,” Leahy said. “That can be very damaging. It can be hard… So [for example], I’m feeling jealous because I don’t think I’m as good as that other person she’s dating, or I’m feeling jealous because I don’t feel like I’m getting enough time with my partner. There’s usually something under the surface of that jealousy that can better resolve my feelings.”

Leahy wants to ensure that everyone in his pod knows they are free to come and go; no one is keeping them there, but rather they are all engaging in loving relationships, and have the ability to see whoever they want.

“There are a lot of right ways to do polyamory,” Leahy said. “There’s no one true way to do it, but there are definitely wrong ways to do it. For example, lying or cheating in a relationship. Those are bad and we don’t advocate for those at all.”

When Anna Griswold comes home from work, she is met by a trio of girls: a 6-year-old, a 7-year-old, and a 16-year-old. If it’s been a long, tough day, and she doesn’t quite have the energy to help the girls with homework, she can always lean on her husband to help out. And if he needs help as well, his husband is ready to jump in.

“When I came into the household, we sat the kids down and told them that I was going to be there and be a part of their lives, and that I would be like a stepmom,” Griswold said. “When everything was explained, we asked them what their thoughts were and they basically just said, ‘Okay!’ And that was that.”

“We’re able to go out just the three of us, or [if] my husband wants to break away and do his own thing, that’s fine. If I want to break away that’s cool, too,” Griswold said. “I think they’ve been married over 10 years at this point… It makes parenting a lot easier!” 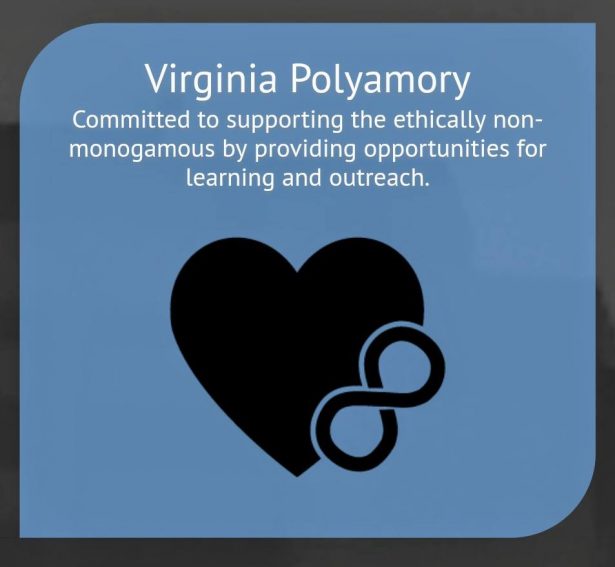 Although her relationship with her husband’s husband – her metamour, as is said in the poly community – is platonic, they share a deep friendship.

“I guess the best way to describe that would be living with a close friend,” Griswold said. “If you’re willing to sleep in the same bed with someone, you have to be somewhat close.”

Her involvement with VA Polyamory has been one of learning and understanding, especially since many of the other members of the group also identify as queer and/or trans, and shared similar struggles growing up. It’s a place she and her husband feel comfortable bringing their children into, a community that is welcoming and healthy for them.

Jim Nelson was first introduced to polyamory at a Burning Man gathering. He met a group of people who all had relationships with one another, and suddenly the feelings he had his whole life began to make sense.

“I’ve never been for the standard romance plan,” Nelson said. “First you do A, then you do B, yadda yadda. I grew up in the queer community, so there was a lot of figuring it out as I went along. The idea of one person, and one person only, never really made sense to me.”

Nelson is part of a subgenre of polyamory called solo-polyamory, in which he chooses not to have a live-in partner, nor a single primary partner. Instead, he balances his time between people he cares about and having personal alone time.

“My personal definition of it is there is no need for romantic love to be restricted to one person,” Nelson said. “Love is infinite. Time is not. Don’t be cruel to yourself by ignoring your heart. If everybody’s okay with it, there is no problem.”

Nelson likes to keep his relationships from getting too serious because of how highly he values his personal space. He needs to know that if he wishes to submerge himself in his work for a couple days, that wouldn’t be a problem with his partners.

“I have people I love and I cherish, some of which I’ll take their clothes off — but not all of them,” Nelson said. “That has been the truest form for me. I like my solitude. I like my quiet. The idea of living in the pocket of another person for the rest of my life sounded like a particularly gruesome hell. You have your alone time and you have your together time, and they like them both.”

Although time management can be tricky, Nelson simply makes sure his partners understand his needs and he understands theirs.

Nelson explained that if communication isn’t there — as with any relationship, monogamous or not — the relationship will fall apart. In polyamorous relationships, that process is likely to happen more quickly due to the increased number of people. It’s not for everyone, and that’s okay.

“I’m not going to tell you that ‘No, poly is the way of the future, you should do this no matter what,’” Nelson said. “If you’re torturing yourself, fucking stop. This is supposed to be fun. If it’s not fun, stop doing it. I’m wired for poly. Some people are just not wired for it. Their emotions just don’t work that way, and trying is just going to make them as miserable as I was when I was monogamous.” 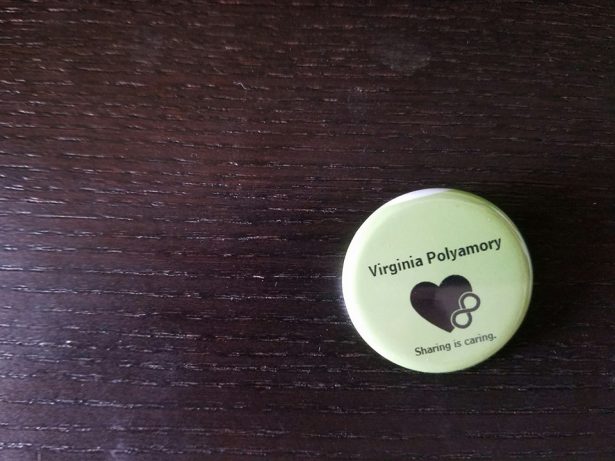 MYTH #4: Polyamorous people just want an excuse to have sex with everyone.

On his way to earning a degree in biochemistry, Nick is making his way through his junior year at VCU like any other college student: buried in homework, working part-time, and spending time with friends and partners. But for Nick, intimacy is the only thing that separates his friends from his partners.

“Being aromantic, it’s really nice to have different partners being able to fulfill different roles,” Nick said. “For instance, one of them will be extremely good at emotional support, and mediocre at any kind of physical intimacy. Another might be fantastic at intimacy but really bad at emotional support. With their powers combined, it’s a more inclusive experience together than it is apart.”

Nick began his journey into polyamory after dating a new partner at college while retaining the partner he had in his hometown. Now that he has two long-distance partners and one partner in town, physical intimacy isn’t the main objective of having multiple partners.

“For me, polyamory is being able to spend time with the people I love in whatever ways make us happy, regardless of however many people that happens to be,” Nick said. “I think it’s the ability to share boundless love with multiple people, and to be able to achieve a deeper connection with all of them.”

Aromanticism is a type of sexual orientation that means a person feels no romantic attraction to another person. Even so, deep, meaningful, personal connections are still entirely possible through friendship and intimacy.

“I find people attractive, and I like being around people, but I have never felt romantically attracted to someone,” Nick explained. “My partners are my friends, and they’re the best friends that I have. For me, there is no difference between a partner and a friend, because I share the important experiences with both of them.”

As a younger member of VA Polyamory, Nick often looks up to the other families and pods who live together, celebrate together, and love together.

“I love when all the parents bring all the kids, and all the partners bring their partners, and they all bring food and chat,” Nick said. “If you strip away everything else, they’re people living their lives, and they’re living their lives in a way that makes them happy. It’s wonderful to stand in the room and feel the amount of love and goodwill towards everyone there. It’s wonderful to express yourself in a safe environment.”