This week, we close out a year of fine music with a playlist from local singer-songwriter extraordinaire Angelica Garcia. She received a lot of attention from her excellent solo debut, Medicine For Birds, released in 2016 by Warner Bros. Since then, she’s made a decided pivot toward the DIY spirit of the Richmond music underground. These days, even as she continues to tour the world as a solo artist, she’s become a force on the local scene; her new group, Jr Wolf, pairs her with Virginia Moonwalker majordomo Russell Lacy. On this mix, she explores sounds from all over the world, but makes sure to represent the heck out of RVA in the process.

Dance your way into the new year with this one, Virginia.

Jojo’s journey over the past decade-plus has been one of pop music’s most unique. Breaking through in 2004 with the smash single, “Leave (Get Out),” the then 13-year-old became the youngest artist to top a Billboard chart. It led to a pair of very solid teen pop albums that totaled an impressive 7 million copies sold worldwide.

Then amid a flurry of label problems, she seemingly disappeared from being the fave of the planet. She’d emerge a few years later dropping a pair of critically adored mixtapes, and a few non-starter attempts at lead singles for a third album before finally getting out of her contract and signing with Atlantic. She released her third studio album last fall, but it may as well be a debut full-length. All of this to say, I was very unsure what kind of feel her live show would take.

Any skepticism proved to be unwarranted. Every single step of her journey was on display at The National on Monday night. With the experience of a career that stretches back to when Ashlee Simpson and Ryan Cabrera were topping the charts, the 26-year-old put on a show that was simultaneously polished and spontaneous, sensual and playful. She tore through killer vocal runs with ease in between sips of olive oil, worked the packed house into a continuous frenzy, and never passed up an opportunity to flash a dazzling smile, soaking in a crowd that was throwing as much energy back to her as she was giving them. Perhaps most notably, there was a hunger to the night that seemed to indicate that she sees this tour as less a culmination than a beginning. 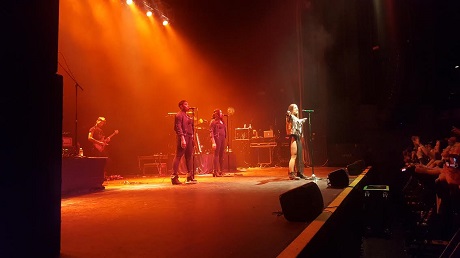 While she took a few songs to find her lane sonically, she was thematically laser focused from minute one. Stepping out in a slit-to-there black dress and silver jacket, she hopped straight into the night’s surprisingly clear message. Opening with “Clovers”, she chronicled a bout with depression, and segued into to the soaring, anthemic pop of “When Love Hurts” and then into a club banger version of “Leave” sending a clear message: this show is a personal journey. From turmoil, through therapy and into triumph. It was halfway through “Leave” where Jojo seemed to really click into gear, as she led the crowd into the thunderous hook of Fat Joe’s “All The Way Up.” It was at that moment that the crowd seemed to give itself totally over to her, hand across the room bumping up and down in unison. She used bits of Kendrick Lamar’s “Bitch Don’t Kill My Vibe” to lead into her similarly-themed album standout “Vibe” and the energy in the room was euphoric. She let the crowd in on her journey as well, as she peppered the set with honest discussions of empowerment and self-love.

The night was marked by a very strong sense of song sequencing, as after that energy boosting start, she effortlessly shifted from the club to the bedroom, into a string of sultry R&B jams. This featured the night’s standout moment, as she pulled a young lady from the crowd and handcuffed her to a chair and blindfolded her, as Jojo gave her a little one-on-one attention while her backup singers serenaded them (with some killer contributions from her drummer). It was a spotlight for the singer’s megawatt charisma. The moment, and the night as a whole, showcased her as a performer in complete control of her sensuality, but also as someone just as prone to losing herself in the moment to a fit of laughter.

It’s more than a little apparent that this is a woman who for a while flirted with the idea of movie stardom. The stage presence is palpable. That energy served her well as she laid it all out for a barn burning finale. Flashes of turn-of-the-century teen pop energy crept into “F**k Apologies” and “F.A.B.” as she cruised the bridges with a smile, and sprinkled the hooks with some light choreography, before showcasing her flow on Wiz Khalifa’s rap verse — complete with the post-Trump touch of changing the “Uber” reference to “Lyft” before getting every single person in the building to start jumping. I’d actually go so far as to say that she has sequenced this live show more strongly than she has the album itself. 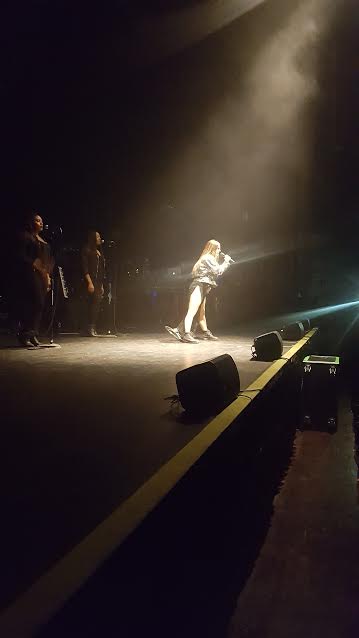 I’d be remiss if I talked about a Jojo show and didn’t talk about those legendary vocals. The verses of songs like “Vibes” let her have fun bending syllables while an acoustic version of album opener “Music” saw her dipping her toes into a pleasing upper register. She smartly saved the best for last though, as set closer “Mad Love” was a whirlwind of killer runs and key changes.

Jojo refers to her touring band as the “Mad Love Family” and it proved to be a very apt description. The night’s opening act was one of her backup singers, and showcased a DJ like ability to warm the crowd up with vocally stunning covers. The whole night was full of spontaneous bits of affection, as her guitarist danced with her singers and Jojo jumped up to hang out with her shirtless drummer for a bit, and lovingly gazed at every member of her team during their intros.

If the Mad Love Family was spotlighted, it was also very clear that this was the Mad Love Tour. Jojo seems completely in love with her current album and what it represents, and relished the opportunity to explore every nook and cranny of it. There’s a tendency in pop shows to lean heavily on past hits, but Jojo’s relative apathy to her first two albums (which is really too bad, because they have aged better than most pop of that era) means that the few appearances her early songs make are relegated to mostly a brief run in the middle of the show. Even when they’re present, they are highly reworked, like the night’s version of “Baby It’s You.” In fact, out of anything in her back catalog, her version of “Marvin’s Room” (which has gathered millions of YouTube views in the past few years) garnered perhaps the biggest reaction. That 2011 remix arguably marked Jojo’s return to the public consciousness, and it feels like a vital part of any live set now. While I applaud the lack of reliance on legacy songs, it was just a tinge disappointing not to hear anything from those early 2010s mixtapes that were such a landmark piece of her evolution, or her vocally spine-tingling #LoveJo EPs.

But all those various pieces picked up over the years to form the knockout live performer that she’s become. She takes the loose, fun positivity of a pop show, merges it with the seductiveness of an R&B show, and coats the whole thing with the raucous energy of a rap concert. In a time when genre blending in mainstream music is at an all-time high, Jojo blurs those lines with a confidence and ease that is truly captivating. The result is one of the most intoxicating live performances I’ve seen in the past couple years. It seems strange to leave the show of such a seasoned veteran thinking “that kid is gonna be superstar,” but after last night, I’d say she’s legitimately a smash single away from being a household name. And as someone who’s had a writing credit on almost every killer track she’s released this decade, I’d wager that’s something she’s gonna cook up sooner rather than later. Put you favorites on notice: Joanna Levesque is coming to snatch weaves.

Words by By Josh Buck

Swedish indie pop sensation Peter Bjorn and John are heading to the US this fall and we are pumped to seem the return to the stage, as well as hear their new album which dropped last month.
END_OF_DOCUMENT_TOKEN_TO_BE_REPLACED