Conventions are easy to get lost and overwhelmed in. Between Pikachu and Ms. Frizzle cosplayers on your left and volunteers on your right screaming to see your badge, it’s a lot. But they are absolutely worth it.

A couple weeks ago, one of the biggest fan conventions in rotation right now, GalaxyCon, made it’s long awaited arrival at the Greater Richmond Convention Center — and it absolutely brought the party with it. From panels and a sizeable Artist’s Alley to meet and greets with some of your childhood’s favorites such as Paige O’Hara, Kel Mitchell, and Austin St. John, GalaxyCon was, no question, the party to be at this month.

If you managed to miss it this year, no worries, friends — because I managed to snap all of the best pictures, and talk to many of your favorites, including St. John himself, along with his fellow Power Ranger Karan Ashley, and your favorite blue-head with the plan: David Fielding, aka Zordon.

GalaxyCon was absolutely massive, just to put it lightly. The best thing I knew how to compare it to was Washington D.C. favorite AwesomeCon, which is held in the spring every year. Richmond has a lot of smaller conventions, for sure, and those are fantastic — but they couldn’t even hold a match to what GalaxyCon brought to the city.

One look around was enough to tell you that — aside from a few folks with strong connections to today’s nerd-ery, including Alice Cooper and John Barrowman (who, yes, is even more handsome in person) — if you were a child of the nineties, a good chunk of your heroes were here.

Most agreed that they came to GalaxyCon because they’d heard it was a fun convention to be part of. They also agreed that I was asking them an impossible question with no quick, easy answer.

That question was: How does it feel to meet the former children who grew up into adults with families of their own, but still love them so much? Adults who can still tell them, word for word, the lines they loved most from their television shows, or sing every lyric to the songs from their films?

Paige O’Hara will tell you it’s everything.

O’Hara, best known as the voice of Belle in Disney’s classic Beauty and the Beast, actively loves meeting her fans and hearing their stories. And let me tell you, I am one of those fans. I have no shame in admitting that when I met her for this interview, I cried so hard that my makeup ran down my face. As a writer and owner of an English degree, it should surprise no one that Belle has been my favorite Disney princess since I was a little girl. And it broke my heart, in the absolute best and most positive way, that O’Hara was just excited to meet me as I was to meet her.

O’Hara also thoroughly enjoyed being at the convention and meeting the artists who were there. She was happy to nerd out over Donnie Dunagan, one of the voices of Bambi, among other things.

“I’m a geek, too, you know?” said O’Hara. “I’m a painter and an artist, as well as a singer, so I’m kind of geeking at some of the people I’m meeting here. It’s just a wonderful, joyous experience. I had a few people here earlier coming to tell me about how Belle made them feel good about themselves, and to hear their stories, it’s like: ‘Wow. How cool is it to be a part of that?’”

If you were born in the late eighties, there was no bigger star by the time you started elementary school than the five California teenagers known collectively as the Power Rangers. Actors Austin St. John, best known as Jason the Red Ranger; Karan Ashley, best known as Aisha the Yellow Ranger; and David Fielding, best known as Zordon who led the team; were all in attendance at GalaxyCon, and they were ecstatic to talk to everyone — from fans who have been with them since the first time Rita Repulsa crawled out from the Earth to little ones just beginning to understand how powerful it is to chant “It’s Morphin’ Time.”

Ashley, who was making it her mission to make sure that everyone got plenty of time to talk to her and ask whatever questions they had, made just as much time for us. How exciting is it to meet former Rangers-in-training now all grown up? In short: very.

“Literally, the blessing,” said Ashley. “I always tell our fans that you always give us more than we could give you. Everyone who walks up to this table becomes five years old again, and it’s just like love on top of love. It’s a nonstop love fest. I absolutely love it. ”

Nothing had sent shivers down my back in a long time the way it did to hear Zordon himself say “Rangers!” Fielding was also beside himself with joy to meet all of the fans who got up at 5 AM every weekday morning to see what kind of havoc Lord Zedd would throw at our favorite teens.

“It’s surreal,” said Fielding. “Most of us go through our lives, and life happens and you can be very focused on what you’re doing. You don’t understand the impact that you have on other people until you hear their stories or what they have to say. The fact that I did something twenty-five years ago, and that has rippled outwards and touched people and influenced them… you forget that one touch, or one smile, or one phrase, can turn a corner for them and make it so much better.”

Austin St. John went on to become a real life Power Ranger for a long time before coming back to the film industry and other projects. St. John was a paramedic and EMT in and around Lorton, VA and the Washington D.C. area for over a decade before deciding to return to acting. He admits that he could have stayed doing that and would have been very happy, but it was meeting the fans that made him want to come back — if nothing else, so he could hear their stories.

“There is really no way to sum that up in a 30-second answer,” said St. John. “Social media wasn’t around back then, but I knew [the show] was popular. After getting two college degrees, going to war, coming back and meeting my fans now that you’ve grown up? It’s taken it from something that I knew was wildly popular, and it helps me understand that it’s touched hearts and minds all around the world.”

St. John continued to tell me stories of fans who came up to him with stories from terrifying to hilarious. And all of these fans credited the Power Rangers franchise for helping them survive this thing that we call life.

“We’ve been a part of some of the sweetest and the hardest moments in twenty-five years,” said St. John. “There is no way to some that up, and it’s not over. We’re crossing into our third generations of fans. Your parents loved it, you loved it, and now your littles love it. How does it feel? I guess it’s mind blowing and humbling.”

In the early to mid nineties our comedy kings were none other than Kenan Thompson and Kel Mitchell, and their throne was Nickelodeon’s premier sketch comedy show, All That. Mitchell himself was in attendance, and was delighted to see everyone grown up.

“It’s so sweet, man,” said Mitchell. “I love that the shows hold up today. I love it when people come up to me in the street and go, ‘Welcome to Good Burger!’ or ‘Orange soda!’ when I go to a restaurant. It’s super funny.”

Mitchell was bringing the attendees of GalaxyCon some important news — the return of All That, with himself and Thompson producing. “It’ll be back June 15th,” he said. “It’s just been awesome, and we’re so excited that the fans still love it. You guys did that — you all did that.”

There was much more to see besides our celebrity favorites, from various panels covering things like general cosplay and creator questions, to Q&As with your favorites. There was even a life size recreation of Toothless from the film series, How to Train Your Dragon that guests could get their pictures taken with.

The dragons were created by John Marks, who is not only a special effects and props designer, but literally the best Tony Stark cosplayer you will meet. I’m still not convinced he isn’t Robert Downey Jr. in a super clever disguise. Please confirm or deny, Rob.

GalaxyCon was undeniably one for the books. If you missed out this year, trust me, I’m bummed for you too. But hopefully our round-up made you feel like you were there with us that weekend. And take heart — GalaxyCon will return to the Greater Richmond Convention Center in February 2020. Only nine more months to wait! Cheers until then.

Virginia Comicon held its annual convention at the VCU Commons this past weekend, which hosted a crowd of over 640 attendees. Celebrity guests included Austin St. John and Walter Jones (the Red and Black Rangers from Mighty Morphin’ Power Rangers), Richmond institution GWAR, and the Fredricksburg rapper mc chris, as well as a multitude of local artists and content creators.

Virginia Comicon was founded in 1986, and is a separate legal entity from San Diego Comic-Con, one of the largest and oldest conventions of its kind in the United States. Virginia Comicon has been a Richmond staple since its founding in 1986 and is usually held at the Richmond International Raceway, but the venue was closed this year for repairs.

The event in Richmond, while smaller was just as exciting for the people in attendance and included video game tournaments on the Nintendo Switch, panels on Doctor Who  and Star Wars, as well as contests for fans who came in costume.

RVA Mag’s inside look at some of the most impactful photos from Comic-Con can be found below: 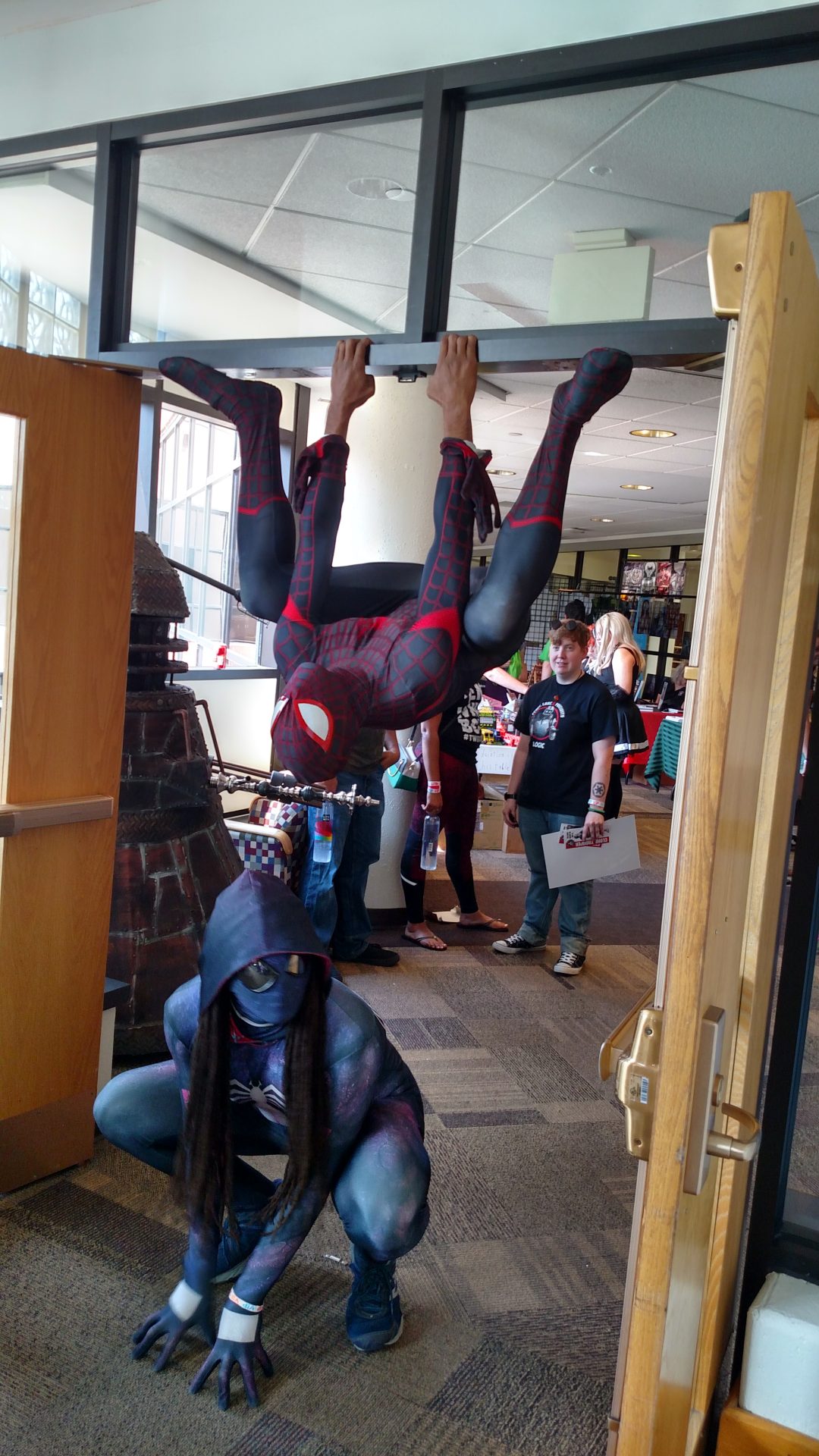 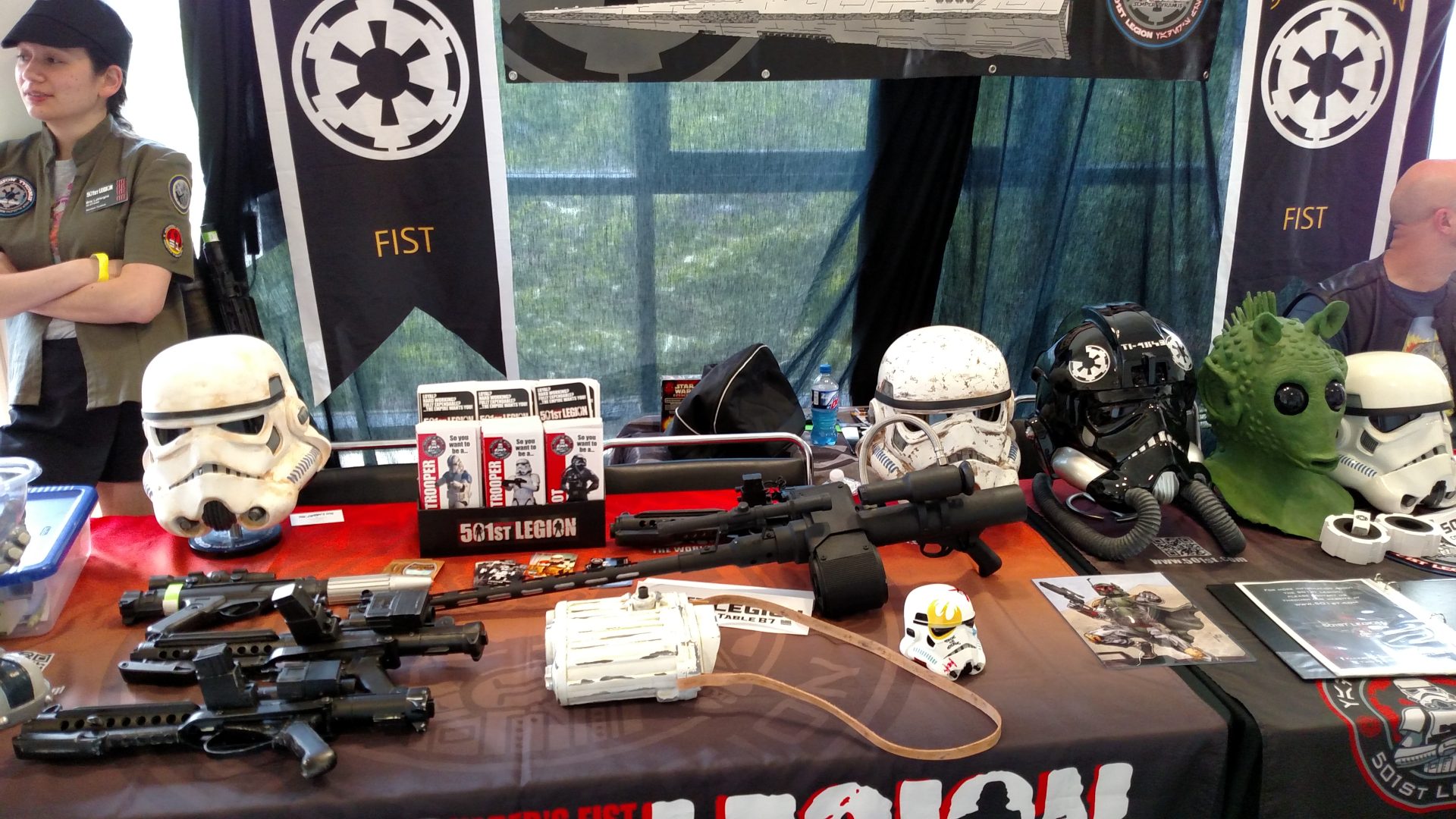 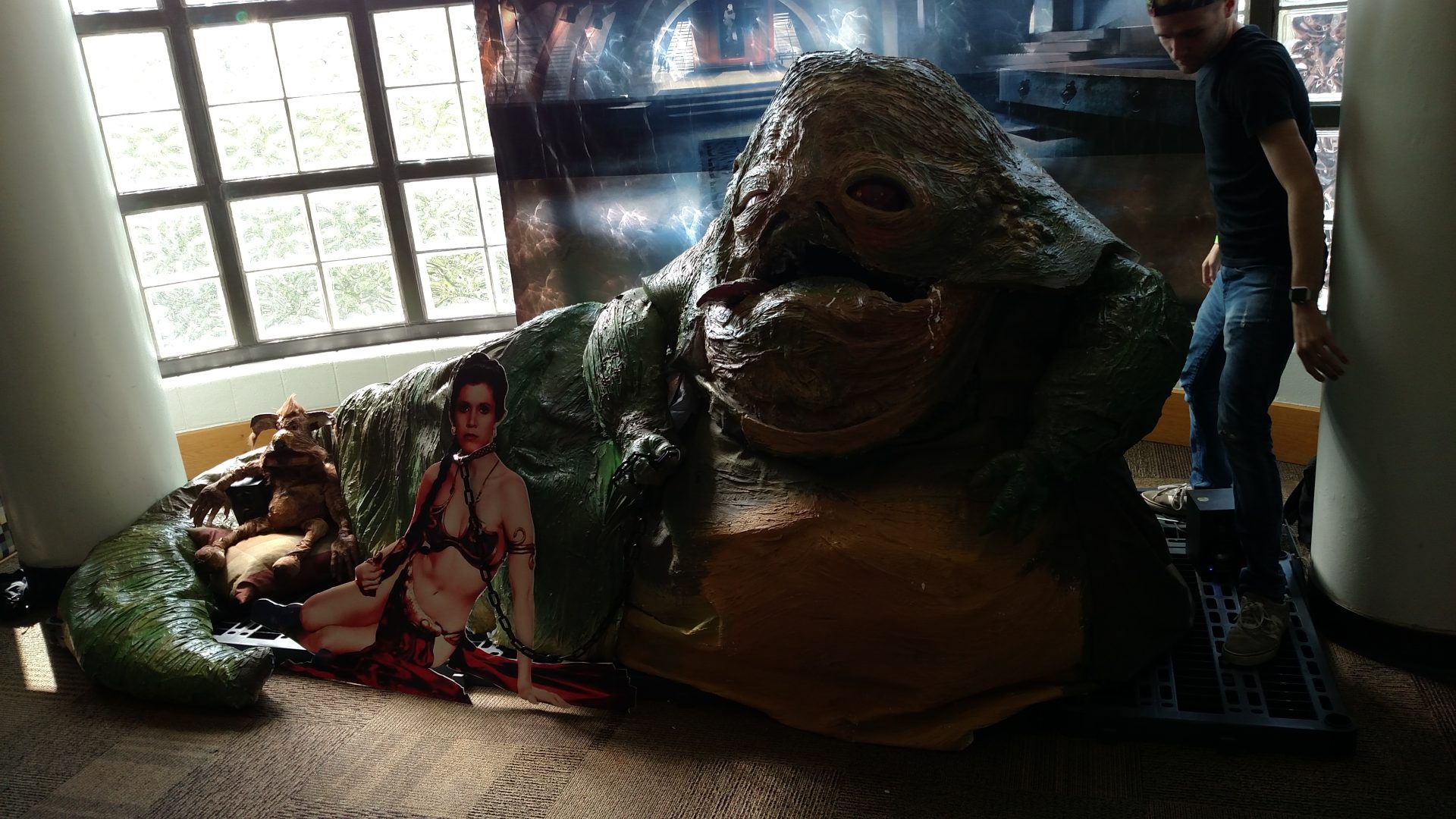 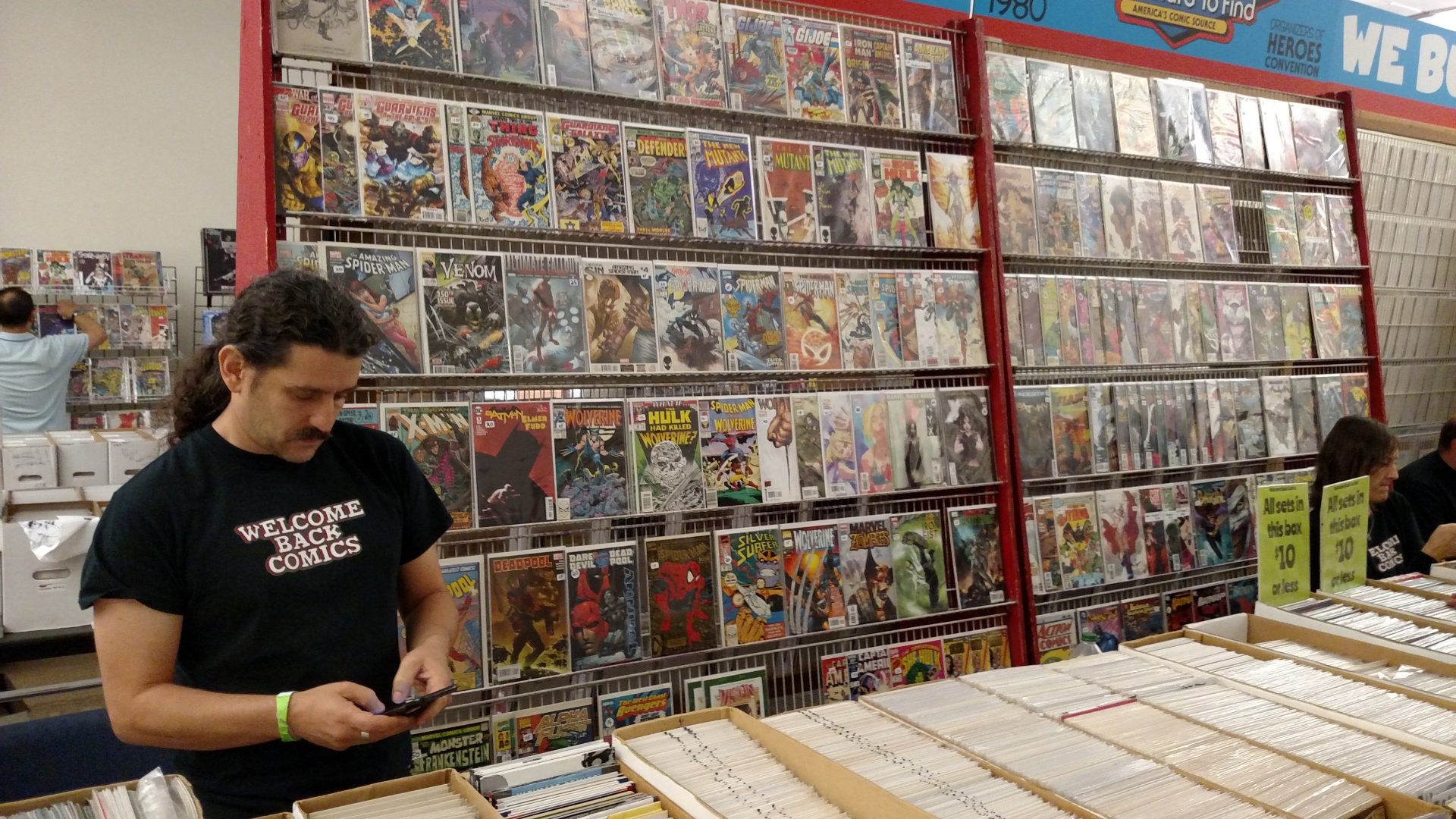 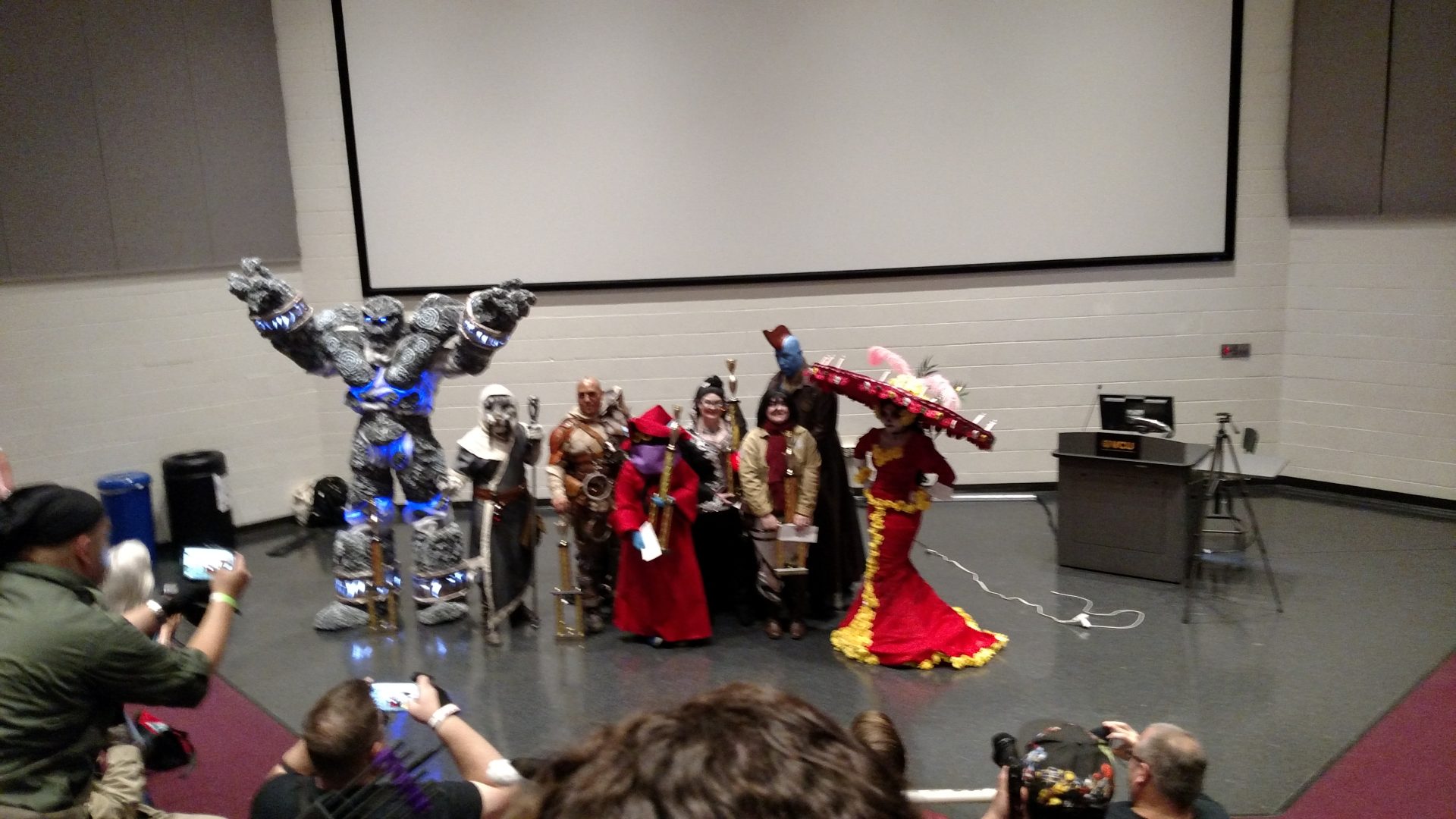 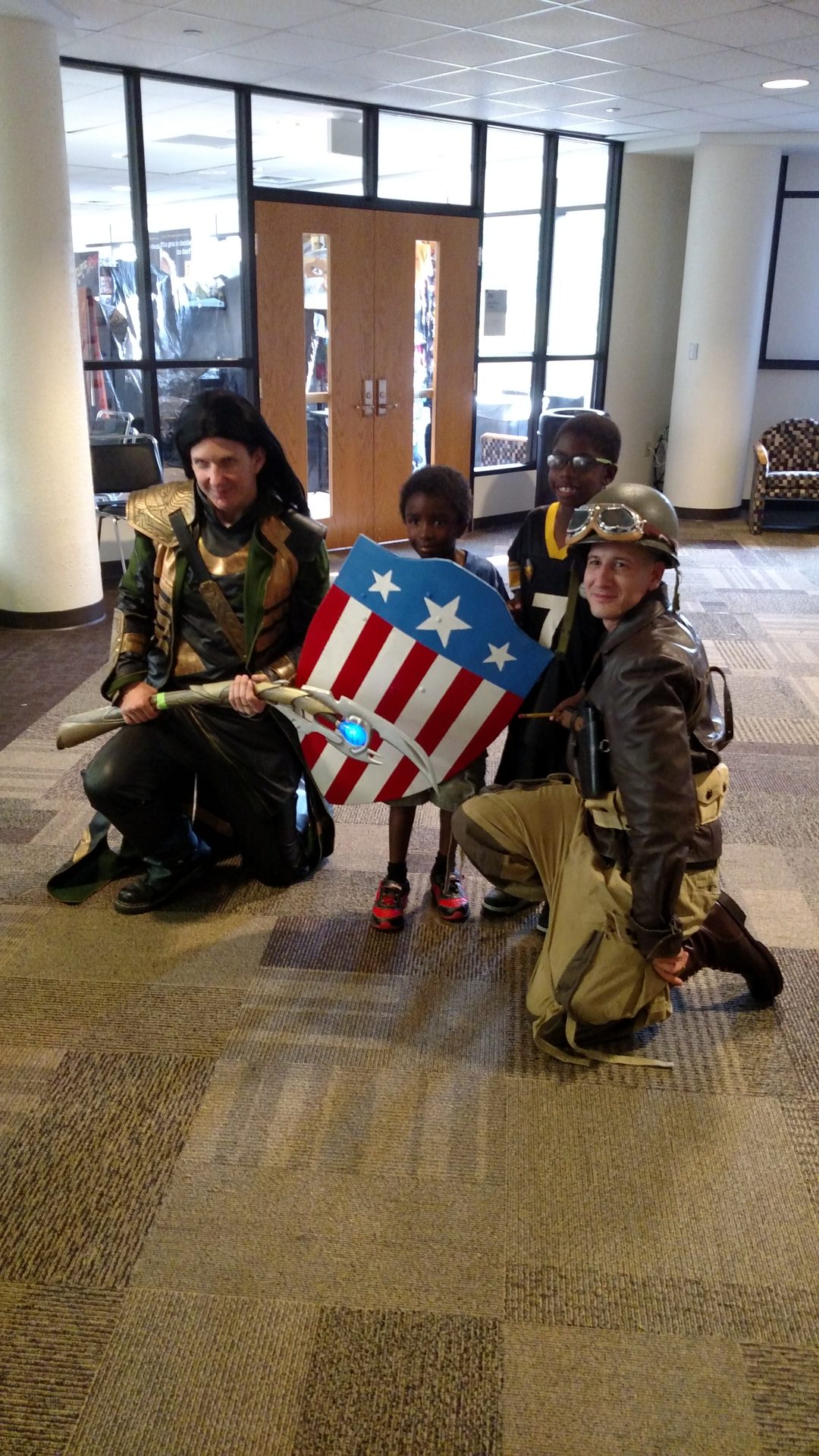 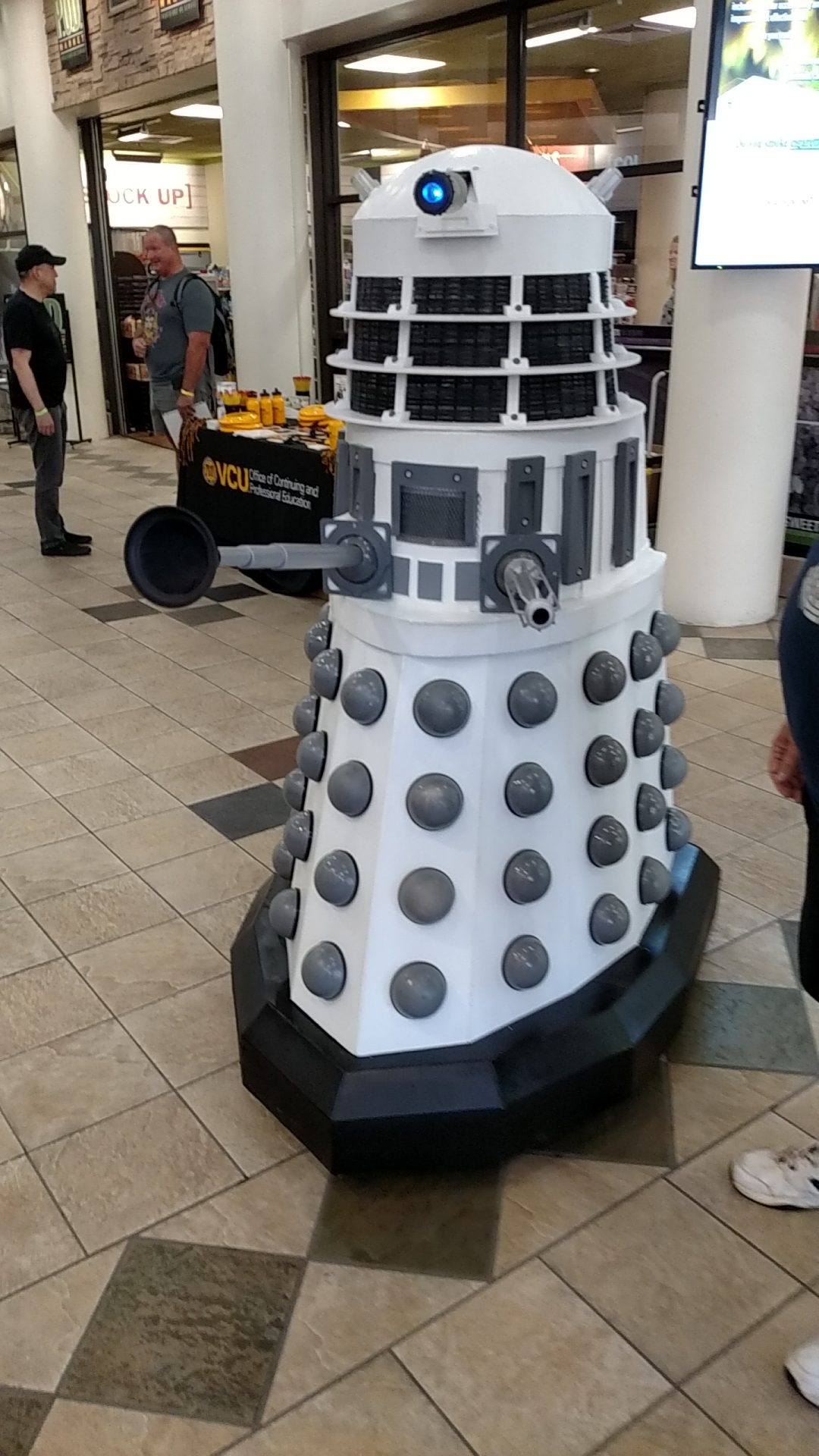 *Top photo by Virginia Comicon, all other photos by David Pettyjohn.

“Why do you think they gave this power to kids…?” asks James Vanderbeek (Dawson’s Creek) to Katie Sackoff (Battlestar Galactica) as she’s strapped to a chair – the two play Power R
END_OF_DOCUMENT_TOKEN_TO_BE_REPLACED