Roughly 200-300 people turned out for a student-organized rally on Brown’s Island today following a national school walk-out commemorating the Columbine shooting 19 years ago.

Richmond police provided a heavy presence at the rally and temporarily closed streets for a march to the state house steps, where speeches and musical performances continued before Governor Ralph Northam and Lt. Governor Justin Fairfax came out to give speeches of support.

“Like all of you, I’m ready for some damn common sense,” Alburger said, asking for consistent national background checks while criticizing politicians who he described as looking to score political points at the expense of addressing gun violence.

One of the many speakers that followed Alburger, Ta’Quan Grant, took up a popular theme with his fiery speech, addressing everyday gun violence from the perspective of “a public school student who grew up in Section 8 housing.” The candidate for Richmond School Board in the 7th district talked about facing regular gun violence, including a handgun he said someone pointed at him, before ending on a hopeful note. “Don’t fight for victory,” he told the crowd, because “We’ve already won. Fight like you already got it.”

Richmond Police Captain John O’Kleasky spoke with RVA Magazine to praise the students who he’s worked closely with as they planned their rally, saying, “They get an A+. We’ve been really impressed by their passion and maturity, and it’s been an honor to work with them.” 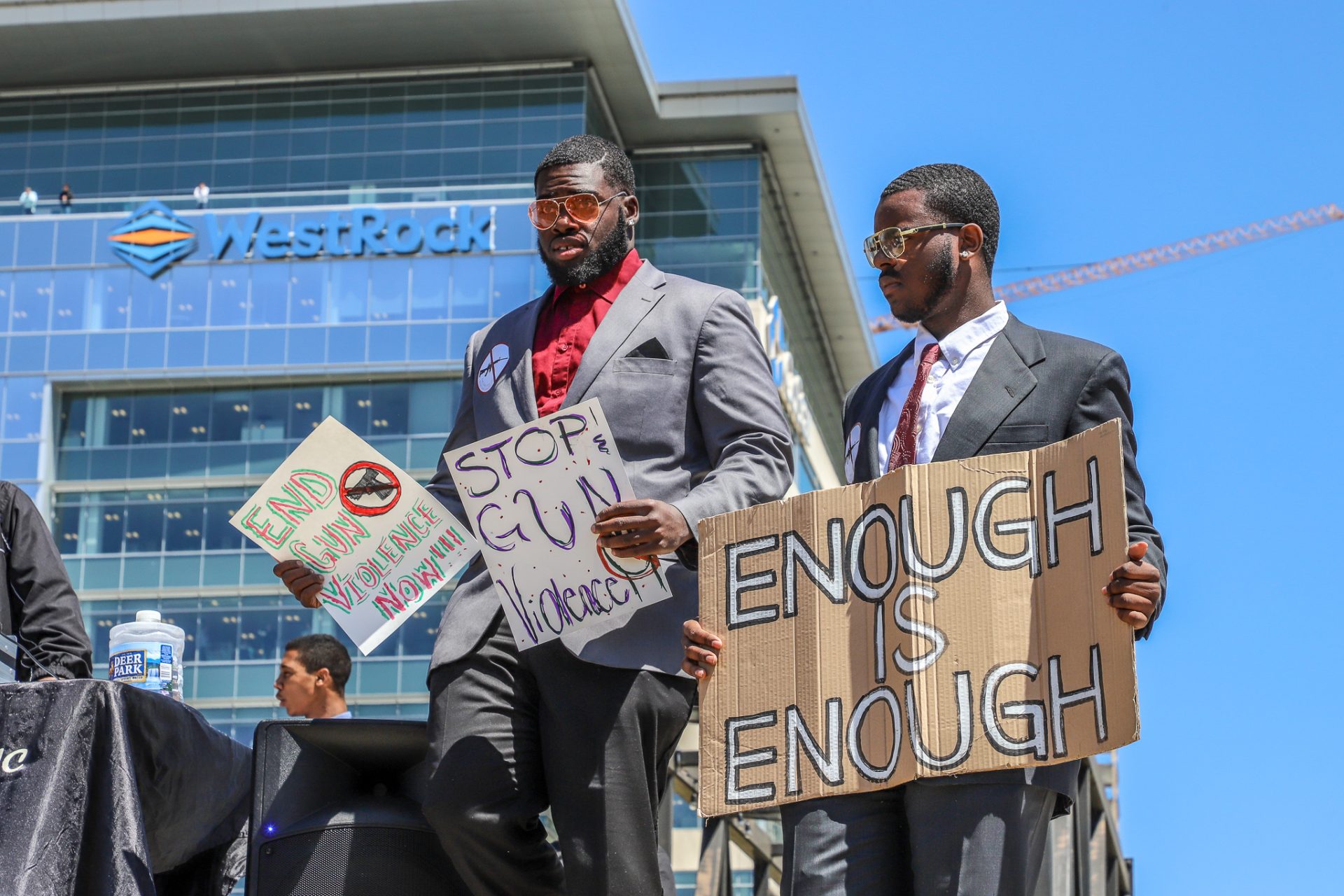 At the capital, the student speakers were joined by political leaders, including Osita Arebu, senior policy advisor to Mayor Levar Stoney. Arebu apologized for Stoney’s absence and shared his support. Like many of the speakers, she brought up common gun violence, including suicide and city shootings, and quoted Martin Luther King, Jr., on economic inequality in the cities, adding, “This is not just a gun control issue, this is a justice issue.”

The last student speaker was Carlos Brown, who gave an impressive speech with an off-the-cuff delivery-style, suggesting a bright future as a public speaker. Employing repetition to great effect, Brown talked about all the reasons he’d rather be in school today, before advocating political actions to address government inaction. “If your congressman won’t meet with you, vote them out,” he said, before listing victims of violence including Trayvon Martin, Michael Brown, and the students of Parkland and Columbine.

He finished his speech with a callback to his opening, saying, “I wish I was in bio class right now, because that would mean we’d be living in our dream America,” a place free of random gun violence and school shootings, where people have equality and safety.

Before Northam took the stage, Lori Haas, the Virginia state director of the Coalition to Stop Gun Violence shared her own story as the parent of a student who was wounded at Virginia Tech. She recounted a call from her daughter 11 years ago, remembering that she said, “Hi mommy, I’ve been shot”.”

She proposed a series of solutions involving political engagement before saying, “I know people wish this wasn’t a partisan issue, but it is.” Haas pointed to the opposition in the government to gun regulations as almost universally a Republican problem and described Virginia as having “the poorest gun laws in the country,” before asking for better tracking of weapons that have been sold.

Haas invited members of Virginia’s House of Delegates and State Senate to join her before introducing Northam, who she praised for taking a strong stand on background checks even as a first-time State Senator from the rural Eastern Coast of Virginia.

The governor used his address to praise the students gathered and ask when will the marches and rallies lead to real, substantial change. “How many lives will we lose to preventable gun violence until we take measures to keep guns out of the hands of people who shouldn’t have them?” the governor asked.

Although he said he’s been disappointed, the governor struck an optimistic note, which he credited to the students assembled, saying, “After years of politicians failing to protect our students, you are taking measures into your own hands.”

Before wrapping up his speech, Northam drew laughs with cheeky praise for the assembly. “As governor I have a responsibility to tell you to stay in school,” he said, pausing for the laughs. “But I can’t think of anything you’d be learning that’s better [than this].”

Some of the best photos of the day can be found below:

The political battle over guns in Virginia is shifting to the state Capitol as the General Assembly convenes Wednesday for its 2016 session.