Every Friday night, RVA Mag brings you an A-plus can’t-miss playlist curated by Virginia’s most influential artists, musicians, and institutions.

This time around, our playlist comes from Cobra Cabana, the much-loved restaurant and bar on Marshall St in Carver. They’ll be rocking hard all day tomorrow with a one-year anniversary party sure to be the highlight of your weekend. As much of a staple as this place has become in its first year of existence, it’s hard to believe it’s been in our lives for such a short time. Here’s to many more years of awesomeness!

Saturday’s party, a free affair, begins around 3 PM and will last into the night. It will feature performances by legendary rap superstar Kool Keith and stoner rock veterans Weedeater, both of whom show up on the playlist Cobra Cabana put together as a sneak preview for RVA Mag’s readers. There are a ton of incredible sounds on the playlist, from Euro-pop and essential disco to No Wave, hardcore punk, and classic country — plus a whole lot more. Put it on now and you’ll blast it all weekend — except when you’re actually at Cobra Cabana, of course.

It’s no secret that hardcore punk rock has played a major role in shaping Richmond’s music rich scene and contributed to its culture, evolving and growing over time with more and more bands, and a steadfast fanbase that followed it from its early underground days at small house shows and DIY spaces, to larger venues in town. In September, Richmond photographer Cindy Hicks gave us a glimpse into the fans behind the genre back in the early 80s, and this Friday, Chris Boarts Larson will showcase the Richmond hardcore punk scene from the late 90s to the early 2000s in a photo exhibit at Vinyl Conflict.

The RVA Hardcore Punk Photo Show will run through the end of March and features in-depth archived photos and memorabilia of bands dating back to 1997-2002, the golden years of Richmond hardcore punk. The photo showcase will feature prominent bands such as Avail, Strike Anywhere, Darkest Hour, Ann Berreta, Hatebreed, Municipal Waste, plus many more. Larson, the veteran punk nomad behind the exhibit, has documented the scene in Richmond since the late 80s. 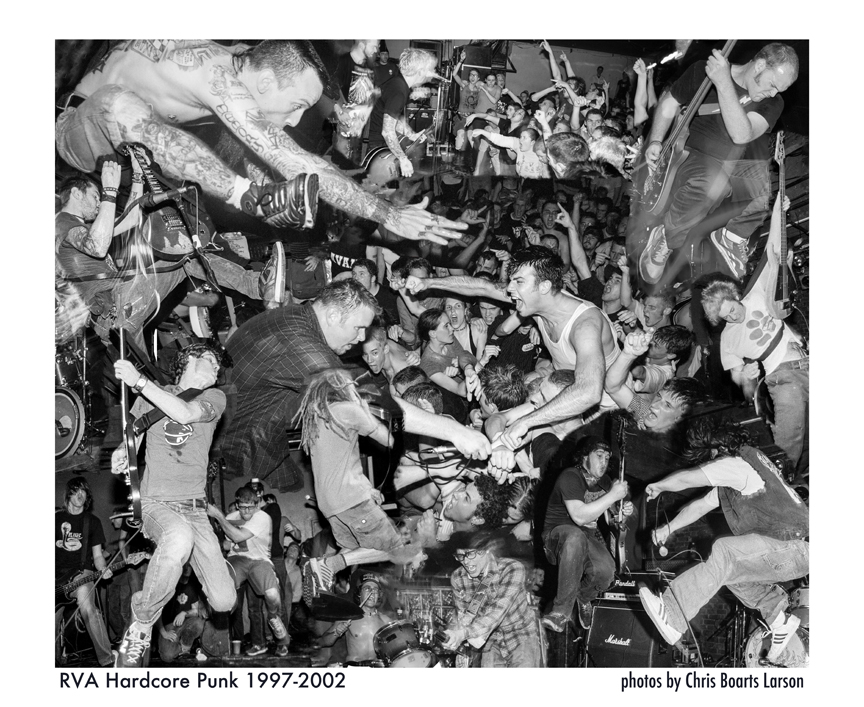 The photo show will feature handpicked photos from Larson’s beat in Richmond, from zip disks to floppy disks, the material featured are recherché Larson personally handpicked while scouring through the various confines of outdated technology, providing rare interview columns, zine reviews, and timeless live band photography otherwise lost to the dead space of time. And after talking with Vinyl Conflict owner Bobby Egger, she knew the local record store would be the perfect place to showcase the photos.

“Bobby and I have been talking about doing a photo exhibit of some of my band photos at Vinyl Conflict for awhile now and we decided to focus on just Richmond,” she said. “Because it’s a small space and I have deep archives of photos, we needed to start with a narrow focus.”

Larson is behind punk fanzine Slug & Lettuce, which was based out of Richmond and captured the DIY punk scene and the community that loved it, along with band photography and punk art from 1987 until 2007. She began to foster the idea of creating a zine while attending State College in Pennsylvania around the late 80s, finding a passion with the talent-heavy area of the time and inspiration by earlier works like Maximum Rocknroll and Profane Existence. After a trip to England, Larson came across a pub named “Slug & Lettuce”, and the rest is history.

The free quarterly zine focused around the punk scenes all along the east coast, with Larson making trips to shows in Pittsburgh and New York, seeing bands like Agnostic Front, the Descendents, Fugazi, JFA, and other punk legends still amidst their salad days.

Bouncing around living situations in Boston and Pennsylvania, Larson eventually settled in New York, where the zine took the next step in its own evolution. The fanzine evolved into a ‘newsprint tabloid’, dropping the glue stick and scissors for feature interviews with upcoming bands and endless material from the non-stop punk scene in a sleepless city.But by the mid-90s, Larson was itching to get out of NYC.

“I did a lot of traveling and touring with bands.  I met the Avail guys, traveled with them, and had a few other good friends living in Richmond. After visiting a few times I kinda fell in love with Richmond,” she said.

Larson moved shop to Richmond in 1997 and continued publishing Slug & Lettuce for another 10 years until the final release in 2007 with its 20-year anniversary issue, the 90th edition. Since then, Larson has solely focused on archiving the excess of historical treasures online, compiling years of timeless punk history into formatted archives accessible for anyone with WiFi to indulge.

And with this RVA Hardcore Punk Exhibit, fans of the genre and fans of those bands and those that were there for all those shows and sweaty, gritty nights over the years in Richmond will get to relive their younger years through these archived photos.

“I spent the last decade reflecting on my years in NYC and my years with Slug & Lettuce, only to realize that I’ve been in Richmond for 20 years, which is longer than anywhere else, so, 20 years of Richmond seemed like the perfect focus for my next project,” she said, reflecting on her project. “Hopefully, this is the first of several exhibits to cover the years since.”

The show is free and open to the public, premiering at the Vinyl Conflict record store at 324 S. Pine St. Prints of the featured photos will be for sale to order, with the first 10 of each being signed and numbered by Larson.

Are you ready for all the face-melting punk your weak little body can handle in two days?
END_OF_DOCUMENT_TOKEN_TO_BE_REPLACED