I have such a disdain for the singer-songwriter archetype. I typically find it super contrived and tend to think there’s some sort of egotistic and self-gratifying personality behind the guitar, keyboard or piano of a singer-songwriter.

END_OF_DOCUMENT_TOKEN_TO_BE_REPLACED

What exactly does it take to silence the nonbelievers? The throngs and throngs of commentators that forever criticize a band’s craft? The ones that go so far as to judge a band simply on their name and never their merits? 2014 has given us a partial answer to this concern: the newest release from Black Girls.
END_OF_DOCUMENT_TOKEN_TO_BE_REPLACED

You’d be forgiven if you expected metal from this band made up of former Lord By Fire, Facade Burned Black, and My War members. However, a mere ex-member pedigree does not provide sufficient insight with which to comprehend Everyone Dies In The End. An instrumental quartet with song titles as long and complex as the songs they refer to, Everyone Dies In The End are the sort of band for which the classification “post-rock” was originally coined. Despite their use of the same instrumental configuration with which this band’s members have previously formed hardcore and metal bands, this band forgoes the verses and choruses that have been the essential basis for pop songwriting for half a century now. Instead, they spend extended periods of time constructing atmospheres through ambient effects and repeating rhythms that slowly pick up steam, like boulders rolling downhill. Eventually, of course, those boulders have to crash to earth, and these moments become the loud and powerful crescendos that dot the landscape of All Things Lead To This, the group’s 5-song debut album.

That title, like the band’s name, is a complete sentence, but compared to the song titles on this album, both of these sentences are rather lacking in detail. Song titles on this album include “Stay Alive No Matter What Occurs, I Will Find You” and “There Are Bigger Things Happening Here Than Me And You.” Paired with the extended musical pieces they signify, the result is a feeling of narrative flow that is surprisingly complete for an instrumental album. In the wake of Explosions In The Sky’s work on films like Friday Night Lights and Lone Survivor, it’s perhaps become cliched to suggest that instrumental post-rock sounds like it should be scoring dramatic scenes from movies. Regardless, the designation is accurate here, and the elaborate song titles, which could even act as brief plot synopses, only aid in creating that impression.

While many of these songs begin in a very quiet place, only accumulating momentum once a few minutes have passed, the album’s final song, “We Bears Are A Proud Race,” distinguishes itself by taking the opposite path. Beginning at full volume, the rhythm section drives the song’s initial riff while the guitars alternate between tremolo-picked melody and outright noise. It is at this moment that the band’s heavy metal past is seen most clearly, as things threaten to turn black metal for a moment before subsiding into more ambient territory. For the most part, though, this album’s sound fits solidly in with the tradition of guitar-based instrumental post-rock that has built up over the past dozen years or so. More concise than Godspeed You Black Emperor, more consistent than Mogwai, and more unconventional than Pelican, Everyone Dies In The End are nonetheless on a similar spectrum to that delineated by all three of those reference points. If sonic fuel for exploration of imaginary vistas within your personal headspace is what you seek, All Things Lead To This will certainly provide. 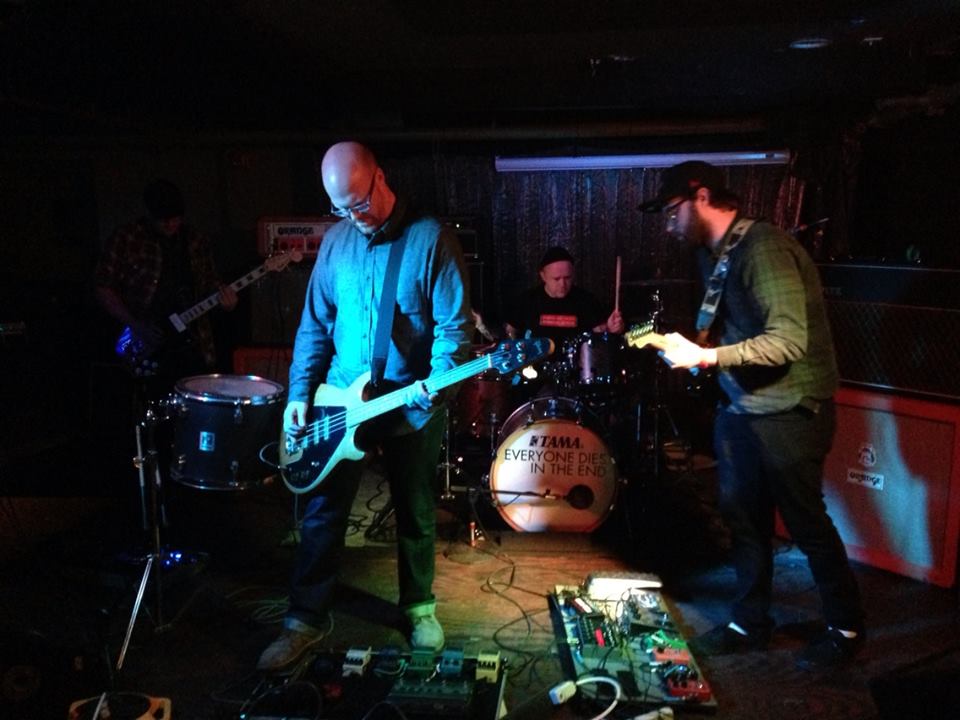 All Things Lead To This is currently available as a name-your-price download from Everyone Dies In The End’s Bandcamp page. The band will be performing at Strange Matter (located at 929 W. Grace St) on Monday, March 17 with The Body, Hex Machine, and Lugweight. Doors open at 9 PM, tickets are $8 and can be ordered here: thebody.eventbrite.com. For more info, click here.

As the fiftieth anniversary of the Beatles’ first appearance on the Ed Sullivan show approaches, little doubt exists that excessive amounts of ink will be spilled, bandwidth will be taken up, and carbon dioxide will be expelled extolling the monumental nature of those few moments in 1964 [there’s even a local tribute show dedicated to it!–ed].
END_OF_DOCUMENT_TOKEN_TO_BE_REPLACED

Ancient Sky – All Get Out (Wharf Cart Records)

One of the more difficult paths a band can tread comes when attempting to work within a particular aesthetic tradition without seeming too strictly beholden to those who had defined it in the first place.
END_OF_DOCUMENT_TOKEN_TO_BE_REPLACED