The mechanical snarl of the coal fire engine keeps pace with the scream of the steam whistle as the locomotive leaves the station. The benches in the train car are wooden and worn, smoothed after years of occupancy. The grain in the surface of the wood spreads out in patterns that are elongated, rugged, and oblong. They are cut at a perfect ninety-degree angle, providing a sense of formality and decorum for the passengers sharing this journey.

Because of this, the passenger taking the seat across from you becomes less of a stranger and more of an intimate acquaintance. You share a knowing glance. He is not like you, though, and disguises his visage by wearing a mask. His eyes are hollow and recede into black portals that become lost to a vacuous and endless space. A smile is etched into the material of the mask, which runs east to west along the slight ingress that poses for a mouth.

Carved teeth flank both sides of an imperious smile. He wears a white dress shirt, unbuttoned to his stomach and tucked into beige trousers rolled to the knee. “The species we take for granted are actually everywhere,” he says, as the locomotive shudders into motion. Your journey has begun. 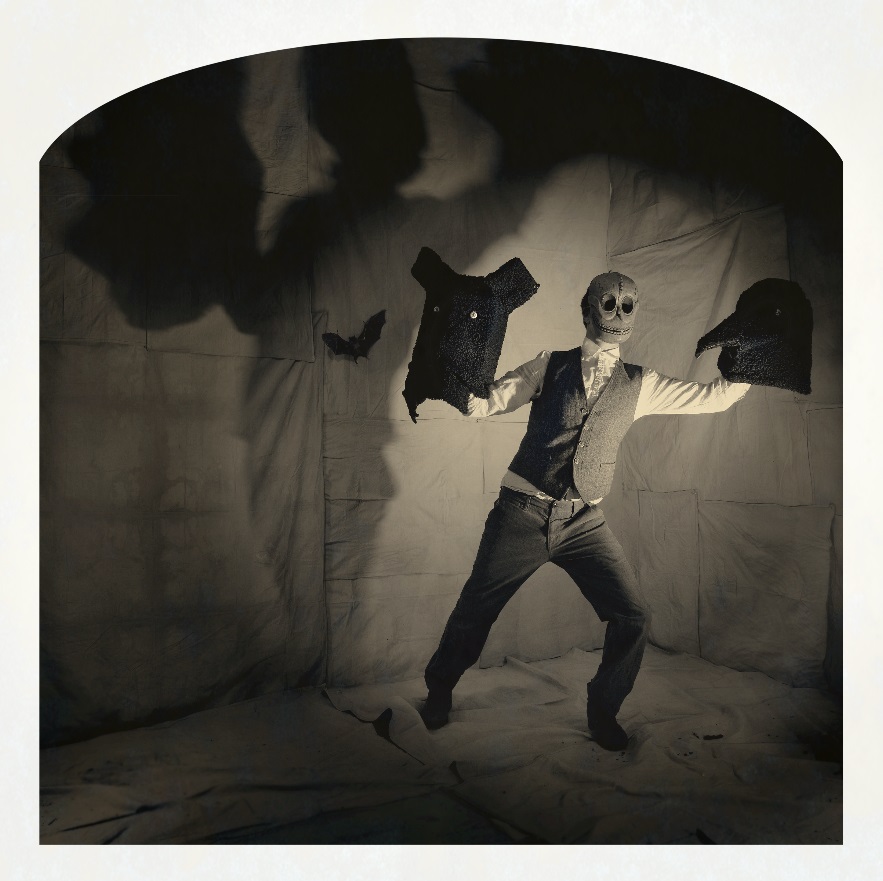 The locomotive you have boarded is traversing new lands and distant shores. This behemoth of steel and iron will take you from the world of known things and into the Drowning World. “You float away to wherever it is going to take you,” says the stranger, acknowledging your curiosity about what is happening just beyond the tinted glass window. He continues, “It is a strange kind of network… the routes that are interconnected,” before going silent again. These routes and this destination exist right under the surface; a territory beneath the waking dreams of our shared invention that we constantly struggle against. In this last outpost, our collapse gives way to rebirth, and from it, a new ecology emerges. A collective which is free from the conventions of known providence; a carnival at the end of the world. 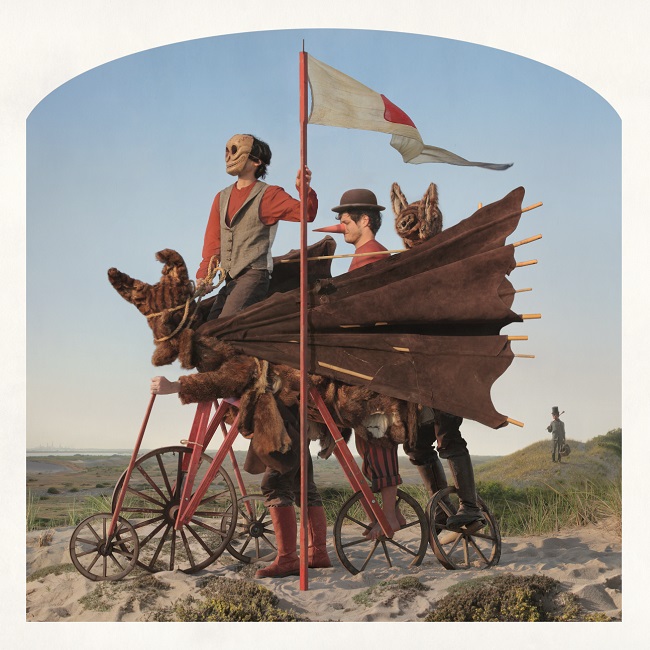 In the Drowning World, the collection of wayfarers, traveling nomads, and performing wanderers are all revered, even worshipped. Not only for their virtue, but for their form, their beauty, and the recklessness of their spirit. In this place, all things have become possible. Even so, you hear the stranger whisper under his breath, “The desire to fly and be more like a god has brought our fall.” 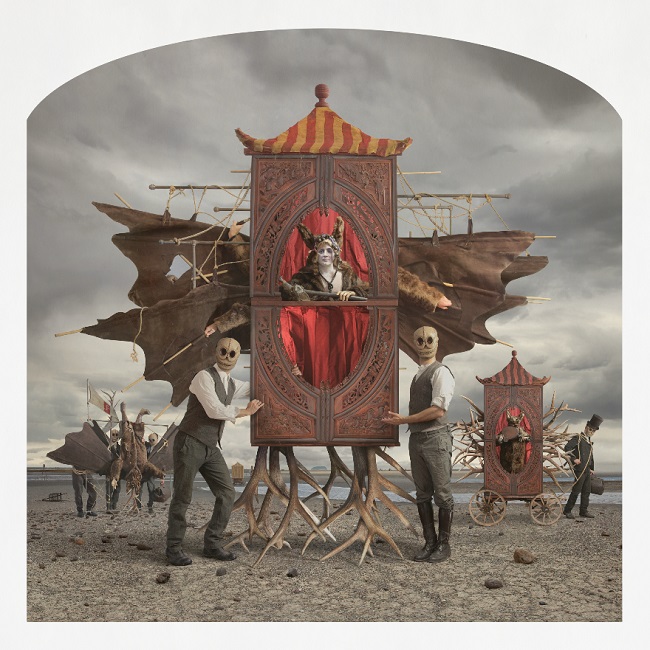 In your hand, you hold a guide to this new land, a travelogue to help you navigate a place not yet explored by those from the known world. It is not so much a book as it is a collection of images, sheets, and ephemera bound together by a map of the railway; an anthology of nonsensical places. Yet each stop is a reflection of somewhere that you once could have been: London, Cape Cod, Lubeck, Somerset. As you review this travelogue, something outside the window catches your eye.

The landscape is green and rolling, and in the distance, water glimmers against a clear blue sky. But that’s not all — just on the horizon, something appears, distant at first before coming into focus. A man wearing a mask, not dissimilar from the stranger’s, has taken flight on a creature resembling a bat. He has a human form, but is far from human. The rider holds the reins firmly in his left hand as he looks over his shoulder. In his right hand, he holds his hat high in acknowledgment, for his achievement is inexplicable. “White-nose fungus affects all the bats,” says the stranger, in an all-knowing voice. There was reservation too. “All of the species are going away due to man.”

As the landscape passes, we see dunes and marshlands, and meadows sprung with luminous wildflowers. Characters adorn these vistas at infrequent intervals. Some are solitary figures who toil against the elements, while some are made of the elements themselves. Each has a story that is individual to the moment of discovery. And each discovery is a portent of what has already been witnessed in the pages of your travelogue. Emerging from this landscape is a figure shaped like a man, but also shaped against the surrounding environment. Flesh-colored hands emerge from his webbing of green moss and weed, the only anatomy which remains human. His posture is stoic and hieroglyphic; a cautionary tale of man’s hubris when trying to conquer nature. 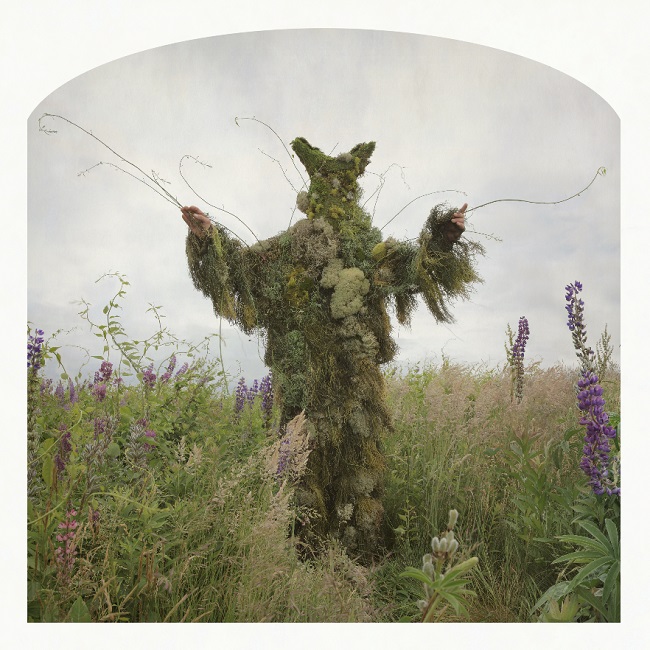 “This is almost like a fugitive marginal land, between land and water,” says the stranger, before returning his gaze back to the moving countryside. Curiosity finally gets the best of you, and you ask about his mask. Why, in this place, he needs to cover his face. When he answers, he looks away. You can feel his voice though; filling the physical space between you both, taking a form that is abundant and generous. You can feel a smile behind the smile of his mask.

He reveals something about himself. He is part of a wandering theatrical troupe that performs in carnivals throughout this place, the drowning world. “You always have a character that represents death,” he says. When you ask about the characters on the vista, the ones who eventually make their way into the pages of the travelogue, he responds, “It is a way for two people to become as many other people as possible.” With an elongated finger, he points outside. Keeping stride with the locomotive is a traveling menagerie. Inside are hanging masks, like the one he wears. “Within the carnival there is the idea that the roles are fluid.” 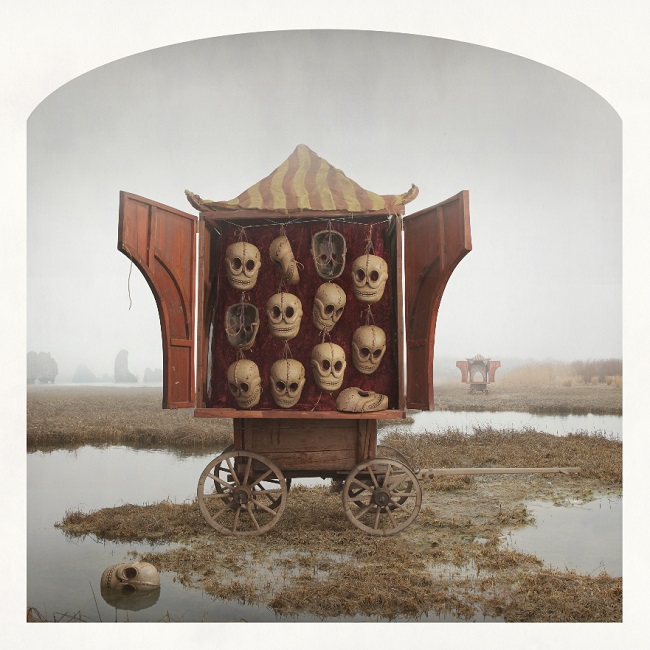 And everything in the drowning world seems fleeting. Reality becomes an illusion based on circumstances that are ever present, but ever-changing. The stranger senses your hesitancy and comments that the world has “turned upside down”. He tells you that the world is a feast of fools, where one can be whatever they can conjure; a priest, a performer, a burlesque dancer, “all things you were not allowed to do” in the space just above this one. As you shuffle through the cataloged pages of the travelogue, you eventually see an image of a woman in silhouette. In the foreground, she stands alone on a plane of weathered grass. You know her, even though you cannot see her face. You have been waiting for millennia. She walks with grace and poise through the same woodlands the locomotive is now speeding through. Around her waist is a red sash, her head crowned with a spire of antlers. She is the queen in a destination you will never reach. 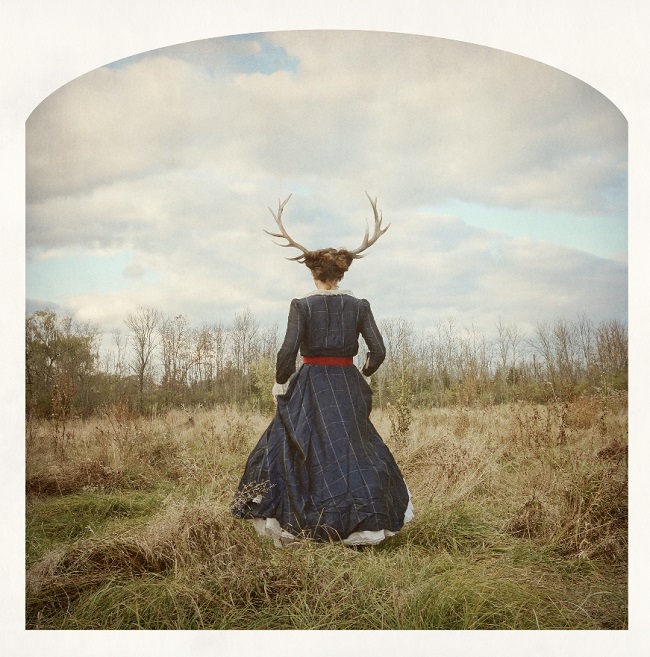 Nevertheless, all journeys must come to their inevitable end. You wait with anxiety as the locomotive pulls into the next station, where you will disembark. New faces and characters scurry about the platform in a frenzy of movement and activity. Before you get up, the stranger places his hand on your arm and removes his mask. His eyes are dark and his beard is matted; he is weary from travel. In his hand, he holds a wildflower, the same ones you saw on the vistas. 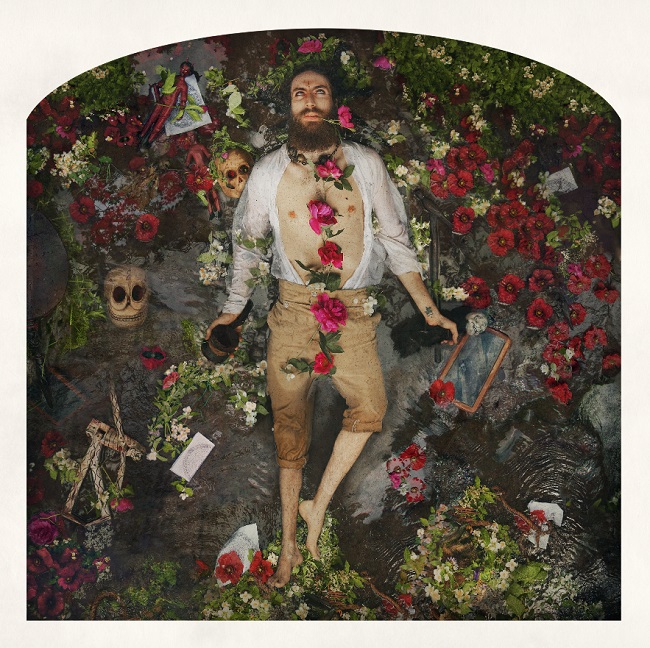 Handing it to you, he says there is no finality, only “a mix of meticulous planning and happy accidents.” You take your leave of the locomotive and rejoin the world of known things.

The Drowning World is a volume of mixed media artworks created by Richard Selesnick and Nicholas Khan, and published by Candela Books out of Richmond. Selesnick and Khan have been collaborating since before college, where they were both finalists in a scholarship competition at Washington University in St. Louis. According to Selesnick, their collection of around 400 images and their accompanying essays took over five years to create. “Four years to create the world, and a year working on the book.”

The conversation with “the stranger,” which was used to narrate this story, were direct quotes from the interview conducted with the Selesnick and Khan. Given the world that they have created and the meticulous way they have placed the viewer in the middle of it, there was little choice but to take the journey to the drowning world with them. The words in this story represent the author’s experience traveling through that place with the stranger, his theatrical troupe, his menagerie, and all the characters still living on the vista.