If there is one stream to check out this week it is Segga Spiccoli’s, “Skinny V”.

“It’s been a year since I’ve released a body of work. In that year I took time to think about my life, my art, the things I’ve experienced these 25 years, and where I want to be in the future,” wrote the Richmond rapper, who released his project on Sept. 7. On his Soundcloud promoting the new album, Spiccoli said he views his work as a memoir that “will live forever” and that “Skinny V” is his most complete work to date. 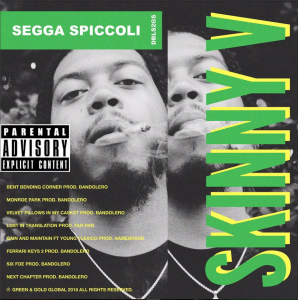 The album, equal parts smooth and introspective, delves into the contemporary struggles faced by young people in these complex times. On the track, “Velvet Pillows in my Casket,” produced by Bandolero, the rapper poses a simple metaphor which speaks to what 2018 has become, asking the listener: “The plot thickens, do you want the red or blue pill, its the prescription.” On another track, “Lost in Translation,” he declares proudly, “I’m tired of hearing old heads talking about my generation, its a shame you complaining ain’t your life still where it was back in the 80s,” a sentiment shared by those suffering through the insanity of this reality TV age bestowed upon us by an older generation who lost its way – prescient.

Spiccioli also collabs with fellow Richmond rappers and producers, such as Young Felxico, Trademark, Fan Ran, and Bandolero, making “Skinny V” a powerful addition to the growing lexicon of musicians and artists taking the River City’s reputation for cutting-edge rap and hip-hop to new levels.