Richmond proudly showcased its community of over 70 inventors and makers Saturday at the Science Museum of Virginia, in celebration of the Fourth Annual RVA Makerfest.

Tables jammed with interactive demonstrations lined the train tracks of the science museum, which was once a train station. Blacksmiths, woodworkers, robotics teams, glassblowers, video game programmers, and sustainability trendsetters conversed with Richmonders of all ages, explaining the processes of their work.

The most striking aspects of the festival, however, were the vibrant enthusiasm of young people enthusiastic about their work and children of all ages participating in activities involving science, creation, engineering, technology, art, and so much more.

RVA Makerfest was created to encourage a collaborative, DIY community in Richmond, to inspire locals “to embrace tinkering and creation as paths to learning and innovation, and to advance STEAM disciplines–science, technology, engineering, art, and mathematics–among children to seed more makers.” A couple of hours at Makerfest made it clear that Richmond is already well on its way to meeting that goal.

Claire, a 12-year-old Richmond native, began Claire’s Cooking Lab after her win on Chopped Junior in 2016. With her prize money of $10,000, Claire donated to charity, started a college fund, and began her company to found a future non-profit group dedicated to bringing fresh food to inner city schools. 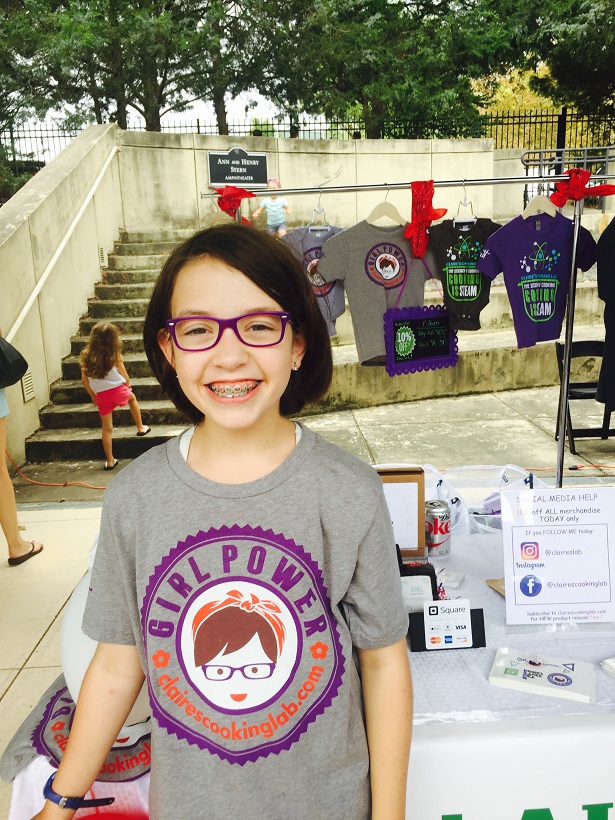 Food science and girl power are Claire’s passions, and she has appeared on ABC Channel 8 and other networks for cooking demonstrations. Her newest creation features “flavor packs,” combinations of spices that Claire cooks up in her lab. “I think it’s really cool to create things, and make things,” she said. “I love science.”

Darquan Robertson, 17, is also passionate about making things with his hands. As a senior at Huguenot High School, Robertson created an ingenious method of self-watering plants. Robertson’s design, a medium wooden box with three pipes fitted to the bottom, is simple and effective. “The design works because of the three drainage pipes at the bottom, which prevent water from leaking out,” he said. “You only have to water them once a week.” 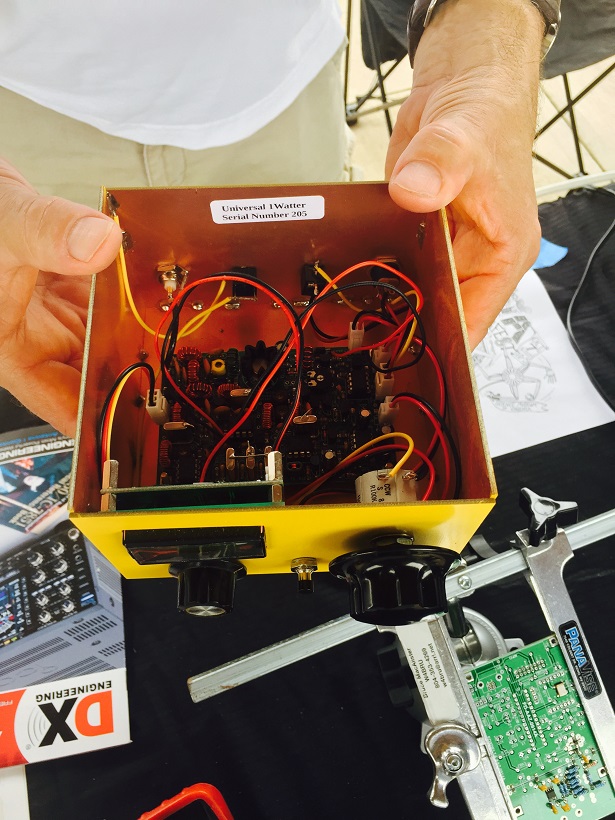 Robertson was inspired to create the concept after he observed the lack of greenery in urban spaces around him, and wanted to give urban businesses the opportunity to display plants and flowers in front of their buildings.

The self-watering plants were an immediate hit, and Robertson found himself with an influx of interested locals. As for the future, we’re excited to see what he’ll think up next. “For now, I think I want to go to school for horticulture,” he said.

Huguenot High was not the only Richmond Public School represented at the festival. Deep Run High School’s robotics team, Blue Cheese Robotics, drew quite a crowd with their sizable robot, built to launch a large ball into the air. 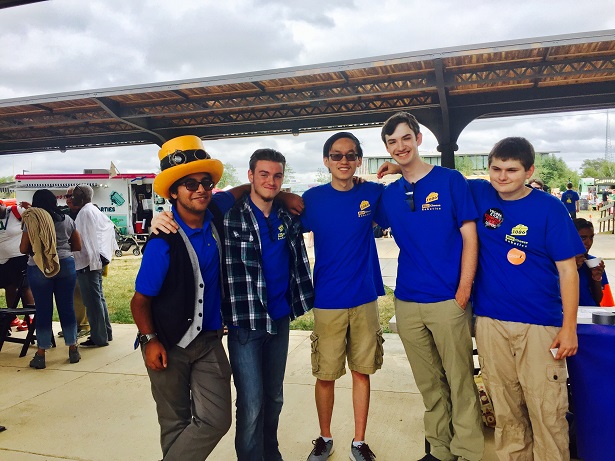 “Every year the First Robotics Competition gives us a theme and six weeks to build a robot,” Chris O’Connor, 16, said. “This year, we won.”

Blue Cheese Robotics took first place among 1,000 other teams, from all over the country. The local team, made up of roughly 60 people, is like a big family, O’Connor said. In the spirit of Makerfest, most team members plan to pursue a career in a technology-related field.

Other innovators included the Richmond Amateur Radio Club, Owenby Organics and 3D Central, a Richmond-based 3D printing company. The printing company had set up multiple 3D printers at the festival, and enjoyed a great deal of curiosity from people of all ages, who were allowed to select small items to print. “Our mission is to bring this new technology to the forefront,” Chris Caswell, a staff member, said. “This machine can make anything, with the right input of data.”

Founded two years ago, 3D Central has already been making waves in the city  – the company recently printed a prosthetic arm for a local disabled girl, and proudly emphasizes the sustainability of 3D-printing. “You can manufacture on demand, with exact specifications,” Caswell said. “There’s really no waste involved, so 3D-printing has tremendous potential sustainability.”

Sustainability was a reoccurring theme at this year’s Makerfest. Owenby Organics, a company enthusiastic about building custom compost bins, demonstrated a unique method of using worms to compost waste at their table.

“Anytime we throw stuff away it goes to a landfill, where it decomposes and produces methane,” Ryan Owenby, founder of the company, said. “Methane is a greenhouse gas, and is even more powerful than carbon dioxide. The more we throw into the landfills, the more methane we release into the atmosphere.”

Owenby, a former teacher, is a strong advocate of composting all organic matter and an educator of sustainable farming. Like so many creators at Makerfest, he strives to invent for the greater good, and to embrace Richmond’s love of art, science and technology. From 3D-printed prosthetic arms to urban greenhouses, the makers of Richmond are geared to continue making our city one of invention and innovation.

To explore more of Richmond’s inventors, visit rvamakerfest.com and find your next inspiration.

*All other photos by Nidhi Sharma

New to the Richmond’s ever-evolving and eclectic art scene is local crafter Emmie McMackin with Emerald and Fig Designs. McMackin began the embroidery company just a few short months ago and has been stitching ever since.

McMackin stumbled upon her new hobby-turned-side-gig by chance. She had been teaching herself embroidery through how-to videos on YouTube when she ended up spotting a craft kit at Target. The more she found time to craft, the more she loved it.

“My great grandmother who came over to this country from Greece when she was 19 was a seamstress so I like to think that I’m channeling her,” McMackin laughed.

Emerald and Fig Designs has its own Etsy, Instagram, and Facebook page. The platforms showcase her different designs and hoops she’s completed. She said her favorite one is the wienermobile, but the best-selling design so far has been the hoop featuring a quote from the novel-turned-movie-turned-TV-show Handmaid’s Tale. 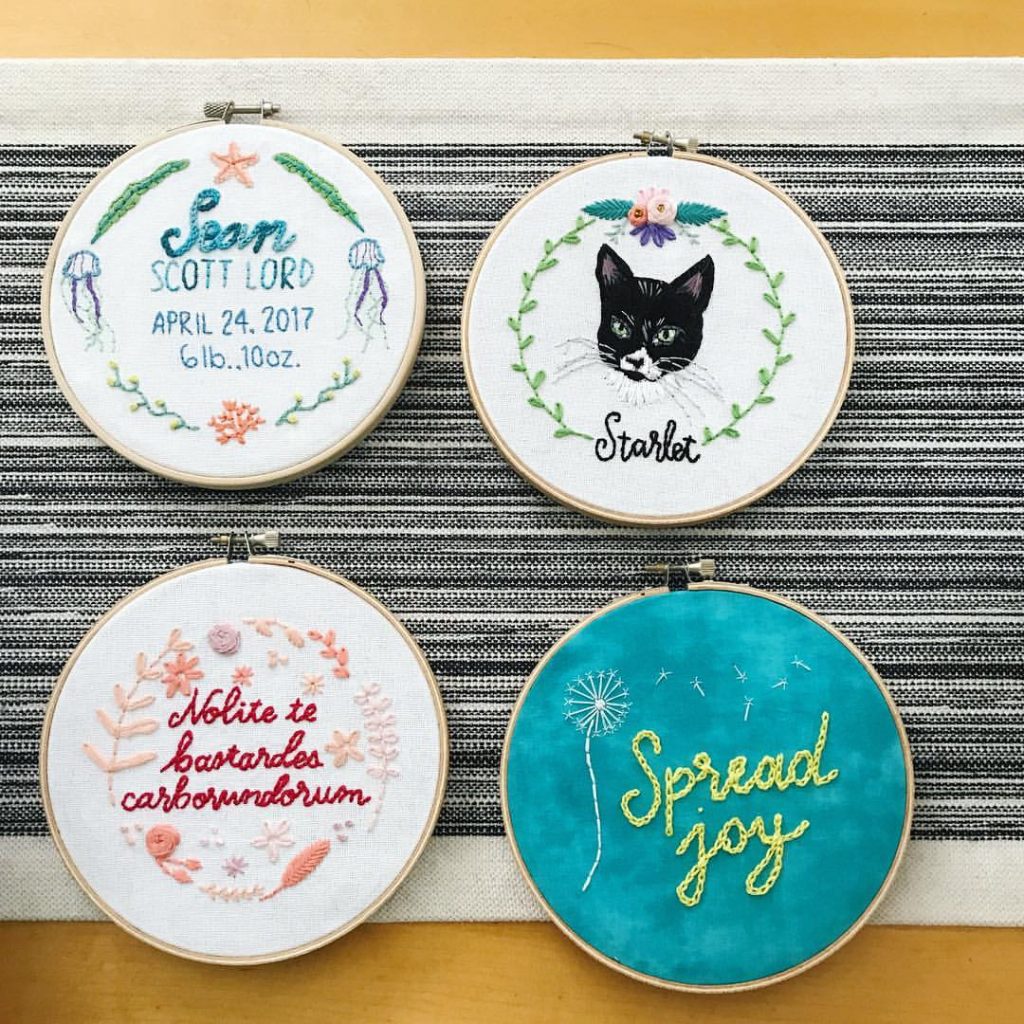 McMackin said she never planned on turning her embroidery hobby into a business, but it started small with friends asking here and there for her to make them their own pieces. One thing led to another and before she knew it, she was brainstorming ideas for a company name. Emerald and Fig was inspired from a bunch of different places ranging from McMackin’s initials to her friend’s cat’s name.

And she’s not the only one with a need to stitch in the city.  Andrea Molzhon of Stitchin’ In Richmond has been taking catch phrases, pop culture references and rap lyrics and making them into intricate handmade embroideries and selling them around town for the last four years.

Emerald and Fig Designs is still very early in its journey. McMackin has all sorts of ideas for how she wants to expand and make the company better.

She said she’d like to maybe one day donate part of the proceeds to the ACLU or elsewhere. She also said she’d like to start offering other products on her Etsy page, like digital patterns so people can make their own hoops or selling products with handlettering because she enjoys doing that too. McMackin hopes to get more out there in the Richmond community by participating in pop-ups or craft fairs, too.

“This is a talent that I just kind of discovered, and I encourage others to explore their creative instincts and try new things, because you never know where it might lead,” McMackin said.