I don’t think I was mentally prepared for how great Primus’s Wednesday night performance at The National was going to be. Going into the sold out show, I had almost no idea what to expect. I had seen videos of their old concerts, but a lot of what you can watch was from the 90’s, and I was expecting the band to be slightly jaded or their presentation to be a little calmer by this point in their career. I couldn’t have been more wrong. The crowd started by chanting “Primus Sucks” repeatedly through the first moments of the performance, but as the show went on, I began to realize that almost every band I’d seen before Primus sucked in comparison. 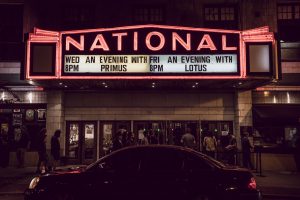 Other than the intermission, there wasn’t a boring part of the entire three hour performance. (Three hours!) There was no opening act for the band, because there didn’t need to be. Primus held the crowd one their own throughout the evening. They took the stage and launched into “Wynona’s Big Brown Beaver,” one of their most uptempo songs. The lyrics to the song are a little ridiculous, but the contrast between the intricate timing, bizarre melodies, and the not-so-subtle lyrics brought a feeling to the room that only Primus could provide. 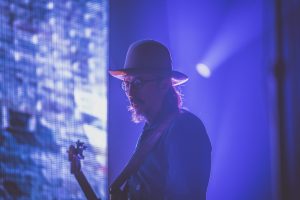 There was no toying around with the crowd; no build up of boring filler songs with a couple of hits thrown in at the end, just classic Primus. The first act of the show was entirely filled with their most well known singles. Les Claypool wore a modern take on the pig mask from the old “Mr. Krinkle” video, and seeing him grind out the baseline to “My Name is Mud” was one of the most incredible things I’ve ever witnessed in a live performance. The music sounded no different than the studio version of the song that I’d listened to a thousand times before. 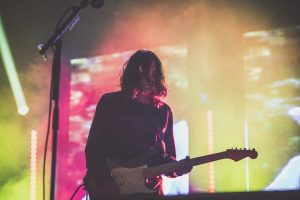 While the first act was amazing show by its own standards, the second act was equally as insane. Claypool came out nonchalantly wearing a pair of Baphomet horns to ignite the performance of the band’s new album The Desaturating Seven. This new album brings together the notorious sound of Primus with what seems like a tribute to the sound of King Crimson – another progressive rock band led by their own iconic string-bender, Robert Fripp. From start to finish, the story of The Desaturating Seven is one of the most engaging and most captivating spectacles of the evening. 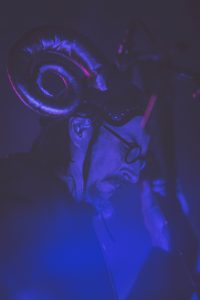 As somebody who wasn’t conscious for the majority of that decade, the weirdness of the nineties seems sort of like a fairy tale. The internet was in its infancy and the ways of the twentieth century were coming to a underwhelming, chaotic breaking point. The decade produced Biggie, Tupac, and Kurt Cobain – some of the most iconic and revolutionary musicians in the history of the human race. In contrast, the nineties also produced a hefty amount of embarrassingly cartoonish fads like boy bands, Zubaz, and Hit Clips. Primus seems to be the perfect culmination of every aspect of the period – the perfect blend of the ridiculousness and the groundbreaking changes that were taking place at the time.

Some of evening’s best photos of Primus can be found below: