If you could tune out cheers from the sold out crowd, PJ Harvey’s stop in Richmond felt distinctly funereal. But as it was, it seemed a darkly joyful proceeding, an end-of-the-world party with Harvey and her nine piece band as the horsemen ushering in the demise of all things.

The National was among the band’s first stops touring off of her latest album, The Hope Six Demolition Project. A mix of fans young and old stood outside in the drizzling rain, filling the venue long before she hit the stage.

Harvey and her band entered as a march, a slow and steady dirge playing, leading into “Chain of Keys.” Beginning the show on saxophone, her new instrument of choice, Harvey stood on the back line with the horn section before stepping to the mic. 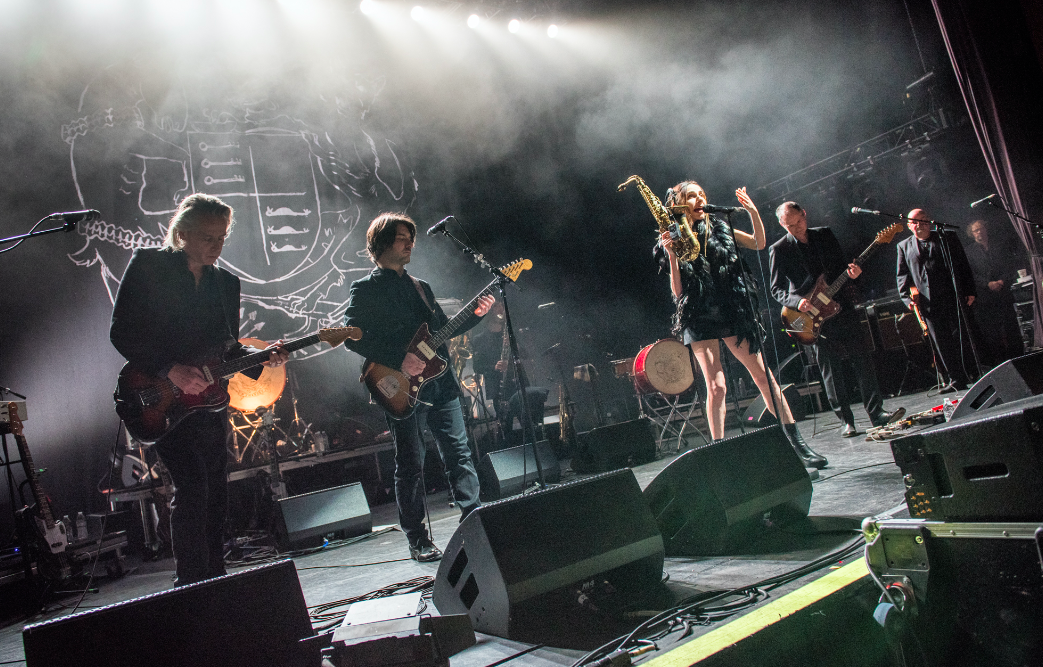 With sax in one hand while singing, Harvey reached her hand palm-up to the audience like an offering, other times, she passed her hand in front of her eyes, as if narrating the passing scenery of the D.C. city block in songs like “Community of Hope.”

Though she could complacently play the hits for years, Harvey has consistently evolved her sound into new and exciting directions, and accordingly, her setlist and performance change night to night (and vastly different from album to album).

Nevertheless, the crowd was just as enthusiastic to hear new singles like “The Ministry of Defense” and “Community of Hope” as Harvey’s older hits; though, of course, the beginning strains of songs like “Down by the River” elicited shrieks and screams of recognition by their first few chords.

Their inclusion wasn’t a record scratch from her new material, a conciliatory move for the audience’s sake, but a seamless transition, a collection of songs chosen not only for their belovedness but how well they meshed with Harvey’s new songs.

Older, blues rock numbers like “50 ft Queenie” were met with similarly raucous cheers, but the song’s inclusion felt like a natural high point for the set.

“We were all really excited by the crowd,” said John Parish, Harvey’s longtime guitarist and collaborator, after the show. “As a band, you feed off that energy. It was really great.”

Parish not only noted the enthusiasm of Richmond, but also his and Harvey’s own connections to the city via Mark Linkous, otherwise known as Sparklehorse. Harvey and Parish both collaborated on Linkous’ 2001 album It’s a Wonderful Life. 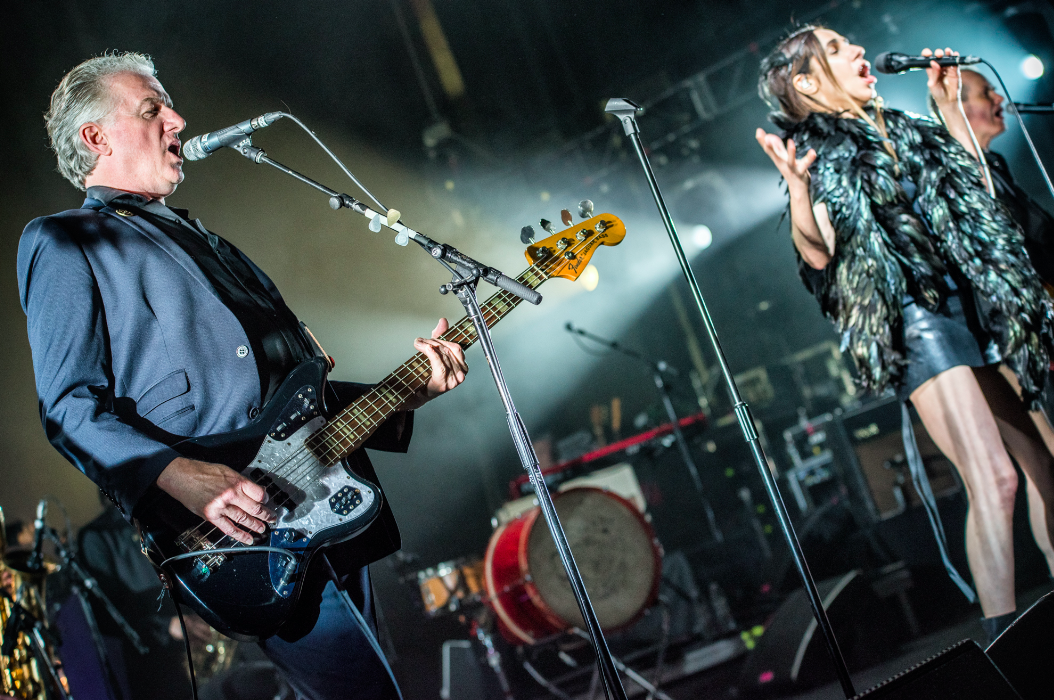 Parish also appeared in the documentary The Sad & Beautiful World of Sparklehorse, recounting his friendship with the late Linkous, who died 2010.

So if this is the “way the world will end,” as Harvey sings in “Ministry of Defence,” then it can’t be so bad.

Set List:
Chain of Keys
The Ministry of Defence
The Community of Hope
The Orange Monkey
A Line in the Sand
Let England Shake
The Words That Maketh Murder
The Glorious Land
Written on the Forehead
To Talk to You
Dollar, Dollar
The Devil
The Wheel
The Ministry of Social Affairs
50ft Queenie
Down by the Water
To Bring You My Love
River Anacostia

Encore:
Guilty
Is This Desire?

In many ways, it’s a misnomer to call Sigur Rós a rock band. They play music, live and in studio, and they release albums. There are guitars, bass and drums, and they tour in theaters and arenas across the world. But the experience of seeing a Sigur Rós performance goes somewhere beyond traditional conceptions of popular music, rock or classical or anything else really.
END_OF_DOCUMENT_TOKEN_TO_BE_REPLACED

It’s hard to imagine droves of people showing up for an all-locals show, even amidst Richmond’s current musical renaissance. But First Friday at the National was anything but a typical night as Lucy Dacus performed her largest homecoming show to date at The National alongside My Darling Fury and Spooky Cool.
END_OF_DOCUMENT_TOKEN_TO_BE_REPLACED

Rhymesayers. Stones Throw Records. Two labels that are known to represent Hip-Hop to fullest. Aesop Rock & Rob Sonic (Rhymesayers), Homeboy Sandman (Stones Throw Records), MC’s who have continued to raise the bar every step of their career…all live right here in Richmond at one of my favorite venues: The National.

END_OF_DOCUMENT_TOKEN_TO_BE_REPLACED

I walk into a pretty empty room, with a couple teens hanging up front, including some girls I’m going to pretend I didn’t see so I don’t have to compliment their crocheted shawls and ask them about college.

Baltimore-born “new age” band Sun Club is already out on stage, looking like a bunch of pubescents that have crawled from a crusty basement to look for pizza rolls after being unbearably frustrated by their inability to level up on Call of Duty. They’re unwashed and greasy, but in the way that makes you sort of impressed and also makes you wonder how much cheeto dust is left on their fingers. I admittedly find myself sort of attracted to them in the teen-girl-way that I and my father both hope dearly that I will grow out of someday.

Their energy is so thick and intense that is dangerous. I watch them thrash around on stage with their hands practically stuck in the strings of their Fenders. They move like have had one (four) too many shots and the boy with the braided rat tail murmurs things into the mic now and then that make me worry about how high he is and if he can make it through the set.
“This song is a little more serious—it’s called ‘Dirty Slurpee.’”

This is the closest I will ever be to a Ramones experience, I think to myself. I wonder if this is what the Jonas Brothers wanted to be—a pubescent Wavves.

Just as my Very Normal friends are starting to get into this Too Loud music, they are lost immediately when the lead singer pulls out a cat puppet that is named either “Darrell” or “Garett” or “Gary” or “Danny”—he really does mumble—and calls him the “sixth member of the band.” Moppy blonde boy starts cheering one of those names, I think maybe “Garett,” and the crowd follows in his lead as best they can considering we’re all chanting four different names. “DAN-NET! GAR-REL! DA-RY!”

They hobble offstage, sweaty and happy, and some kind of aggressive folk music comes on for a while, intermingled with Bob Dylan, and we wait for Surfer Blood. My friends yawn and two of them leave. Half an hour later, Surfer Blood’s lead singer, John Paul Pitts, comes onstage to adjust his guitar and I realize this was the guy who watched me plead with my friends by the front door to spend $15 on this concert and then fangirl over the t-shirts (which I was then too ashamed to buy) at the front of the venue as I came in.

The rest of Surfer Blood shuffles onstage over one and a half thousand chords on the floor, looking 10 years older than Sun Club, like they’re nearing Commitment Age. The crowd does its thing—it’s whooping and hollering. One kid keeps yelling “Surfer BLOOD” in the same way that a frat boy tells his buddy to “CHUG” so that all 50 times he said it, it sounded like he was telling the band to “suck my BUTT!”

The band has started playing a little apathetically, sort of like “here is our set, let’s just get through it.” But it’s good enough that no one really cares. And then I realize maybe this is a normal energy level for bands, I can’t remember, and Sun Club was probably hogging all the acid tabs on the tour bus.

The drummer, Tyler Schwarz, sits in the back, sort of indifferent to his situation, charging his phone and drinking a beer.

They’re all wearing solid color t-shirts—blue, brown, the bassist sports a daring white! Their shoes are all things you’d find in your 13-year-old brother’s closet as he slowly begins to identify himself with what Avril Lavigne so poetically called in 2002, “Sk8er Boi.”

Surfer Blood is from West Palm Beach in Florida, so their sound is what they call “surf rock,” and what I call “an angrier Beach Boys.” Their music most nearly fits this scenario: the soundtrack to a drive through Malibu in sunglasses you paid too much for but still bought because they make you look cool in a retro and rich sort of way.

They remind me of The Drums and the Smiths sort of, but maybe because I haven’t been listening to anything but Morrissey’s melodious sobs in the last 8 days.

This whole time, as I’m bobbing my head obnoxiously next to String Cheese Girl who is still going at it, I’m trying to figure out what Pitts reminds me of. I finally realize it’s a cherub. Like the ones you see on Valentine’s Day cards that say “Be mine” or “I love you” or

The girls next to me wearing headscarves are into it. I hear them say to each other, “He’s weird.”

“But weird enough that I would hook up with him.”

And like clockwork, this is when Pitts decides to hop off the stage and linger into the crowd just in front of where I’m standing next to these girls.

Cupid soars down from Olympus with his arrow in hand.

I immediately grow tense and start aggressively watching the bassist because I find this to be almost unbearably uncomfortable.

Their energy escalates through their set, or maybe I am just getting more sweaty.

Some kid tells Schwartz that he loves his drum set, and Schwartz says, “You want to play it?”

So the kid hops up on stage and finishes the song: a 4-minute riff that the whole audience is afraid won’t end smoothly.

Pitts says “thank you” for the last time, awkwardly sets his guitar down and walks out. My friend asks me if we can go now and just as I’m saying yes, they come back on for the encore. She rolls her eyes as they start playing “Point of No Return.”

Then he says, “this next one’s a cover—hopefully some of you know it.”

I’m fully prepared to be one of the girls that starts cheering after the third chord because I, of course, will know this cover of what I’m certain will be another weird little indie band’s song from 2008. You know, before they got big. The third chord comes and goes and I’m an uncultured and very suburban idiot still.

“Thank you Charlottesville, you were a great crowd. Really, we like you.”
I bet that’s what he says to all the girls wearing headscarves.

14 years after his last album release, and three years since his last tour, the odds seemed stacked against Richmond native and renowned R&B performer D’Angelo.
END_OF_DOCUMENT_TOKEN_TO_BE_REPLACED