The seven-member group got its start on the local improv circuit, and began writing sketches earlier this year; they made their debut performance at Coalition Theatre in April 2018.

Trash Bang draws from a wide range of aesthetics and influences. Variety shows like Liquid Television, Monty Python’s Flying Circus, and Pee-wee’s Playhouse are major inspirations for the group, but each performer brings their own particular style to the table.

“I think what binds us is a lopsided view of things,” performer Joe Mack said. “Everybody in the group has an absurdist worldview.”

Performances typically feature an overarching storyline that’s broken up by video segments and animated shorts projected onto the wall behind them. The video skits and animations are primarily the work of Grace Manno, Dashiell Kirk, and Shawn Hambright.

“I think we all love the 90’s grunge-zine aesthetic,” Manno said about their visual aesthetic. “It has tone’s of anti-capitalism/consumerism and DIY. It’s messy and fast. Largely we try to think of what’s going to shock or demand attention.”

“Those eras are often thought of as ‘high art,’ but really it was just groups of oddballs trying to process the insanity of their day,” Manno said. “I like to think we’re trying to find our way through some of that as a group.”

Mack also cites historical movements and figures from that era as a model. Some of his recent sketch ideas, he said, were inspired by the writings of Daniil Kharms, an early 20th century Russian poet and playwright.

“He kind of predates absurdists,” Mack said. “He’s like a proto-absurdist. So there’s an absurdist lineage there.” 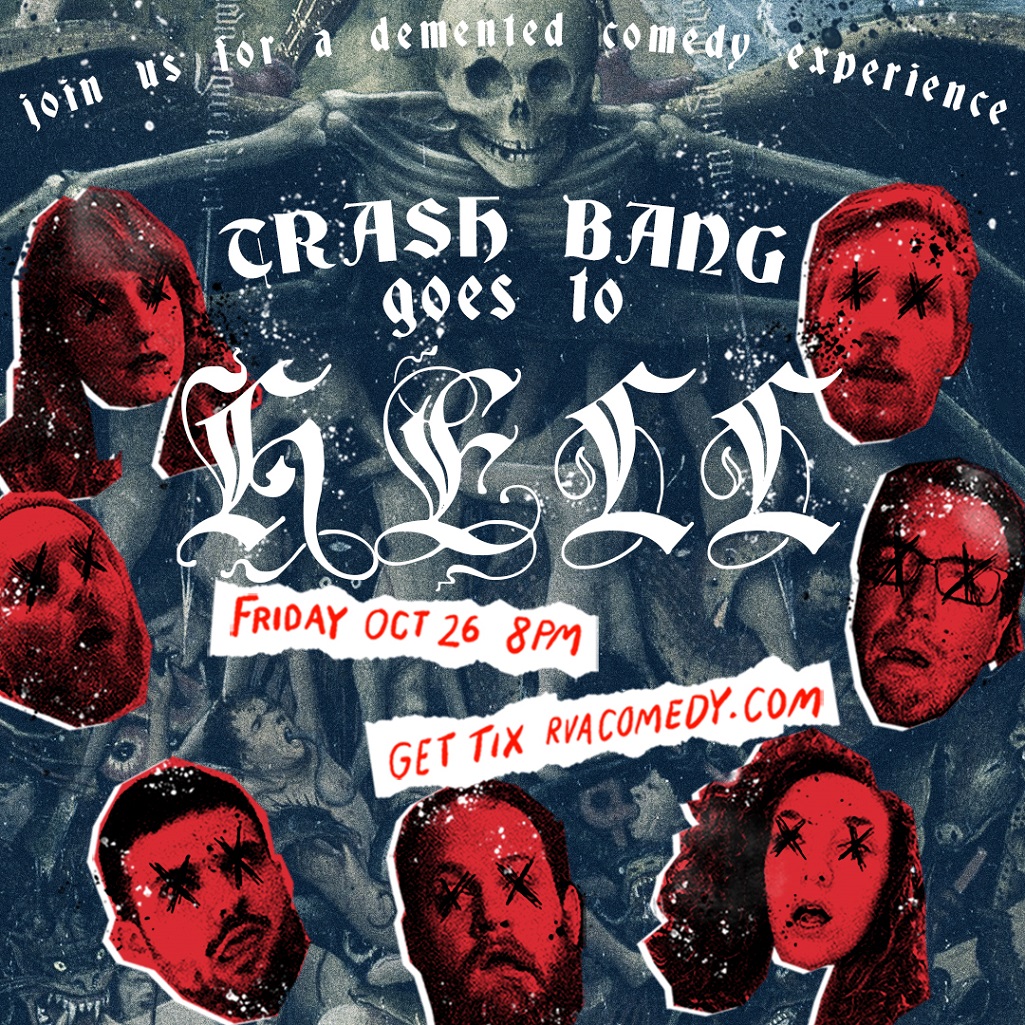 Yet Trash Bang’s loftier ideas and influences are undercut by the group’s crude playground humor and penchant for gross punchlines, described by Mack as “pee pee poo poo boobie” jokes.

They’re one of only a handful of sketch groups that regularly perform throughout the city, but Trash Bang’s smart mix of comedic styles and multimedia features have made them a group to look out for.

Discount Tuna, the VCU-born sketch comedy group, is bringing four nights of absurd hilarity to the Firehouse Theatre. With a group of diverse and talented actors, Discount Tuna promises an unforgettable evening of the obscene, the hilarious, and the downright silly.

Founded by Chandler Matkins, Dante Piro, and Rachel Lamb, Discount Tuna first began at the No Shame Variety Show held at the Shafer Street Playhouse at VCU. With different strengths and talents, the trio grew their posse to form what is the present day group.

“When we first started working together, we found out that to be able to work in a space where all three of us can let loose in our particular fields, we were able to keep each other in check with our own little comedy checks and balances,” said Dante Piro. With Piro behind the writing and Rachel Lamb and Chandler Matkins behind the comedy, the three work in near perfect unison.

Since there is writing and planning involved, sketch comedy sets itself apart from its theatrical cousin, improv. “Sketch comedy is focused on individual sketches,” said Lamb. “Everything ends in a nice little bow. They are just short little vignettes.”

In terms of what sort of comedy to expect from these vignettes, Lamb categorized it as “very silly, a little out of this world, [and] absurd.” “We’re typically going for the shock factor and the absurdity,” said Piro.

With something as untraditional as sketch comedy, Matkins emphasized the importance of seeing a form of comedy that isn’t too frequent in the Richmond community. “It’s unlike anything you’ve ever seen in Richmond. We’ve got Comedysportz, improv stuff lying around, we’ve got great serious plays, big musicals. There’s not been a lot of sketch comedy stuff.” Matkins explained that this style of comedy is enjoyable and worthwhile. “It’s easy-going, low-risk, high-reward, happy, funny-theatre-evening-time,” he said. “I meant to say that like that because it’s not nice and fancy. It’s like middle grade good time, a good evening.”

All three actors highlighted the level of talent and hilarity that will come from the performances. “We were very blessed with an incredibly diverse group of people this year,” said Matkins. “People that come from all walks of life and just an incredible range of talent.”

“The rehearsals so far, we’ve all been laughing so much. I think the show is going to be so much fun to see. I’m excited for everyone to come see it,” said Lamb. Perhaps the most hilarious reason to come see their show can be neatly summarized: “A Chorus Line is sold out. You might as well see this.”

Discount Tuna, Raw and Ready: Four Nights of Sketch Comedy can be seen July 5 through 8 at the Firehouse Theatre. Tickets are $10. Includes explicit content and minor audience participation. Find out more information here.