The return of beloved bands from past eras is always a thrilling occasion and this weekend at Strange Matter was no exception as mid-90s Richmond punk legends Action Patrol returned to, er, action. This hyperactive quartet, whose trademark was the orange jumpsuits the members wore onstage, mixed spastic nerd-core freakouts with a surprising melodic streak. On their two EPs and one LP, The Weak Force, they graced listeners with an enduring classic that dug their hooks into the brains of everyone fortunate enough to listen (I’m sure I’m not the only person who occasionally still gets “Tube” and “Brains” stuck in their head).

It’s no surprise that the reunion caused an immediate uproar in the Richmond underground. Originally booked as a one-time thing, tickets for the Saturday night reunion sold so quickly that a second show was added the night before. Although it was the Saturday night show that got everyone was most jazzed since it also featured the reunion of Sleepytime Trio. The chaotic, rumbling roar of this four-person trio had a similar spastic energy as that of Action Patrol, but replaced melody with heavy, emotional intensity, making them an obvious forebear of today’s screamo scene.

Back in the heady days of the mid-90s post-hardcore scene, when all-ages shows were an every-weekend thing, Action Patrol and Sleepytime Trio were not only musical mainstays of the Richmond scene but friends and comrades in musical performance. When Action Patrol played their final show in 1996, Sleepytime Trio paid tribute to their friends by taking the stage in matching black jumpsuits. In 2006, at the last local Action Patrol reunion, Sleepytime Trio stormed the stage for a surprise two-song set before Action Patrol came on. This time, though, they’d be playing a full set, which cranked up the excitement to an even higher level.

The anticipation paid off in a big way Saturday night, as both bands proceeded to level the place, blowing away everyone fortunate enough to grab a ticket in the day or so they were available. Sleepytime Trio was joined for a significant portion of their set by guest vocalist Jason Wood, who played bass in Engine Down, another classic band from the era. Action Patrol dug the jumpsuits out of mothballs, hung a big orange flag up behind the drum riser, and blew everyone’s minds.

For one brief moment, it was as if 1996 had never left. Here are some of the best photos from the night:

The mid-1990s was an adventurous time for underground music, especially for punk, hardcore, and [scr]e[a]mo bands. Building off the vast musical foundations laid by the pioneers of the genre in the late 70s and throughout the 80s, the 90s emerged as a time of experimentation, aggression, and a fierce commitment to local scenes.

Virginia was at the heart of this national musical movement, with now-legendary bands emerging from Hampton Roads, Washington DC, and of course right here in Richmond. For young people who came up in this scene, bands like Jesuit, MayDay, Words a Game, and Channel from Hampton Roads, along with Fugazi, Nation of Ulysses, Jawbox, and Hoover from Washington DC, changed everything by articulating a kind of camaraderie, spirit, and individual power that was lacking during the lethargy of the 90s. Through these things, lifelong friendships were born and the course of so many lives determined.

Yet nowhere was this reality more potent than right here in the River City. Richmond in the 90s was a mecca, a sanctuary for the underground that rivaled the greatest scenes in the US – the legacy of which the city is still benefiting from today. In this sonic vortex, bands like Avail, James River Scratch, Hose.Got.Cable, Inquisition, Men’s Recovery Project, The Rah Bras, Young Pioneers, Four Walls Falling, and countless others brought a certain kind of sound and style to the national scene that is still being tirelessly imitated.

On the forward edge of this scene were Richmond dissidents Action Patrol and Sleepytime Trio. You would be hard-pressed to find a single scene kid from the 90s in Virginia who was unfamiliar with either of these bands; and rightfully so, they represented a unique passage from the stoic hardcore punk of the 80s to the more progressive emo and screamo of the 90s. The inevitable transition from the musical war waged against Reagan’s evangelical America to the more tolerant and liberal era of the Clinton’s represents an under-appreciated golden age in underground music. The creative tension between these two generations generated some of the scene’s best music, as older musicians linked up with younger musicians to create new genres and sub-genres in the process.

In the 90s scene, almost anything was possible; the old heads know this history, and the history of these bands, intimately. Therefore, it was little surprise that Action Patrol and Sleepytime Trio’s upcoming April show at Strange Matter sold out last night only a few hours after ticket sales began. In fact, Strange Matter announced that it was one of the fastest selling shows in the venue’s history. This should come as no great shock, given that they’ve also been a scene staple (in multiple forms) since the 90s – hence, the “triumphant return” of these bands, as this article title suggests. But it is more than just scene nostalgia that sold this show out in record time. While each of these bands has done reunion shows before, there is something about this day and age which makes their re-emergence so needed, especially for those who came of age in the 90s. 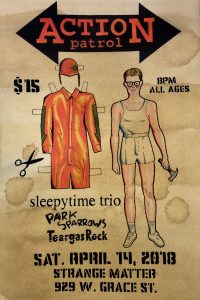 Perhaps it is knowing that we now live in a time where political and social complexity could be greatly articulated by bands who knew how to irreverently take the proverbial “piss” like Action Patrol. On their song “Tube,” they proclaim snidely, “I don’t think I’ll hold you close, I’ll just hold you responsible for another loud mouth advertisement,” before going fucking nuts in matching orange coveralls. Does that lyric need to be put into a contemporary context, or should we just accept that this sums up most of our entire experience in 2017? How about the frantic agitation and feverishness behind Sleepytime Trio’s “Rock Candy,” where singer Drew Ringo crows, “Forced reaction, Danton. To your intrusion, Robespierre. It needs no answer,” a weirdly subversive nod to the terror of the French Revolution; another perfectly timed and prescient lyric for what people have felt and experienced in 2017.

There is no doubt that music today is thriving, just in different formats, which are spread out across multiple scenes and genres. And ultimately, all music conforms to the context and circumstances of the politics, art, and cultural life that surrounds it; much like it did for those who came of age in the hardcore, punk, and screamo scene of the 90s. Do all people look back and fondly claim that their scene was the best scene? Of course they do. Nonetheless, there was something about the 90s and how one scene transitioned to another that revolutionized underground music in the US. Virginia led in that process, making the scene here unique amongst the best scenes nationally.

For those who missed the brief window to see Action Patrol and Sleepytime Trio on their home stage at Strange Matter, it sucks to be you.