Richmond’s classic sports landmark, The Diamond, which has hosted thousands of baseball fans since 1954, has received a complementary face-lift courtesy of the fourth annual RVA Street Art Festival. The festivities were in full swing yesterday, with patrons, artists, musicians, and community leaders coming together to celebrate the venue’s transformation into a living work of art. 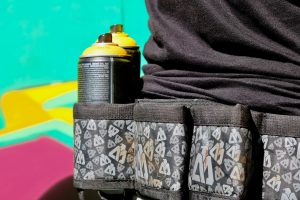 The location for this year’s festival was special, however, appealing to sports and art lovers alike – with hopes of melding the city’s burgeoning arts community with the city’s great American pastime.

Throughout the day Richmonders and visitors populated the stadium grounds; interacting with artists and their projects, trying their hand at painting mobile walls, and checking out local vendors and their wares, all of which were set against a range of activities that highlighted the spirit of camaraderie the city is known for.

The event, which enjoyed a steady but scattered crowd throughout the weekend, was spread between the inside of the stadium and adjoining parking lots. This year’s event included 35 artists, made up of a handful of local favorites like Chris Milk, Nils Westergard, Mickael Broth, Ed Trask, and Hamilton Glass, along with a few out-of-staters and one international artist.

Given the sports-themed location, some of the artists chose to include related imagery—such as Parker Galore’s fractal-frenzied Nutzy, or Earl Mack’s homage to the former Braves’ mascot, Connecticut (a sculpture by Paul DiPasquale which now adorns the old Lucky Strike building in east Richmond)—but most of the artists chose their own original compositions to bring to life.

Event organizer and former city councilman Jon Baliles, who spoke with RVA Mag, mentioned that he did hear sentiments like, “I thought there was going to be more baseball stuff,” to which he replied, “You know, we let the guys and girls do what they do, we don’t tell them what to do.”

Regardless of what people’s perceptions might have been, the majority of artists started painting on Friday with a couple even starting earlier in the week. Yet most of the pieces really started coming together by midday on Saturday in front of curious onlookers and art enthusiasts. Unlike the two previous locations of the Street Art Festival, the Bus Depot on Cary Street and the Southern Silos in Richmond’s Manchester District, the Diamond offered a somewhat unlikely place to host Richmond’s Street Art Festival.

Nils Westergard told RVA Mag that the location poses a paradox of sorts since holding a “street art” festival away from direct and free public access can be somewhat counter-intuitive.

“For me it’s not so much whether people will see it, it’s that you have to pay to see it. I mean we are literally behind a gate here. I like to do this stuff for the public.” However, he did go on to say, “But don’t get me wrong, seeing all of the artists come together to create over this period of time is always so remarkable, and I truly acknowledge that they do their best with the location that they choose. I’m very happy to be here.”

Artist Esteban de Valle, who comes from Chicago but is now based in Brooklyn, had his own interesting take on the space. “It’s very unique. I like when my art is introduced to unexpected spaces,” he said. “This is a space that is designed for a certain function, where every decision is more or less a practical decision within that function… but then you introduce art.” Valle finished by saying, “So it’s really cool to see it in this space. It’s kind of bizarre.”

One playful mural featuring an aerial view of the city with a UFO flying a ‘”River City” banner was a standout Richmond-themed piece. First year participant Brian Gonnella, an artist and writer from Pittsburgh who was responsible for the piece, remarked to RVA Mag that he’d never painted anything like this before. “It’s pretty cool, a unique experience,” said Gonnella. “I am kind of bummed out looking around at all this concrete and I just want to paint everywhere, but we are limited to a specific spot. But it’s pretty rad, I hope the building stays up for a while.”

But that hope is currently up in the air.

Baliles made it seem as though the Diamond may be subject to the same fate as the Bus Depot, which eventually deconstructed its public art to make way for a condo development.

“It’s not a done deal yet, but it’s pretty apparent that VCU is going to be the owner of a new stadium, and they [the Squirrels] would be the tenant,” said Baliles. He explain further,  “I mean VCU will play there too, but here, the city owns the land and they basically have said, ‘This is yours, do what you want with it.’ So they lease to VCU, so it’ll just flip. VCU will own the stadium and the Squirrels would be the main tenant.”

When asked if he thought the new complex would incorporate any of the Diamond’s grounds, Baliles seemed to think that they’d just build a new one. “For the model of how baseball usually works today, it needs to be more flat and out. Most minor league stadiums these days have a family side, and a drink beer side.” 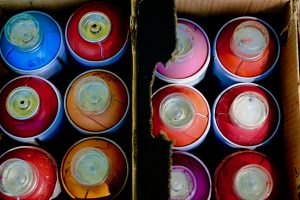 That being said, there seems to be an effort to update the sports complex space to serve the University’s needs, as well as accommodate the popular demand for minor league sports. Baliles continued, “They’ve done as much as they can here, but it seems like they’ll be needing to move.”

Despite the city’s development squabbles, the Street Art Festival at the Diamond produced another fantastic body of public art, and continues to deliver an action-packed weekend for the city.

Richmond artist Nico Cathcart, who is participating in her third Street Art Festival, said that the more condensed environment of the stadium this year was a boon to her experience. “The last location was very spread out. And that was fun, because it was in Manchester. But this one is really concentrated, and I love that because you get to interact with everyone around you.”

Cathcart’s observation is hard to miss. The setting made for a bustling atmosphere among the artists and patrons, allowing for more intimate encounters between both. This close-knit environment also provided artists with a colloquial forum to speak with onlookers about other projects or community-based activities they were currently working on.

A participant since the first year of the festival, Hamilton Glass was able to share his upcoming partnership with the activist group Girls For A Change. “I am here with Virginia Credit Union, and we are doing a project on October 14 with Girls For a Change,” he said. “It will be on 24 E. Broad Street, and it will be a direct reflection of one of the Girls For a Change action groups that design the mural under the leadership of myself and a VCU student.”

The festival didn’t just provide a unique experience for the onlookers though, providing a level of novelty for the artist too. Creating art at the stadium was a first for artists Hasson Roberts and Rachel Owens. Even Galore, a community organizer of renown from Gallery 5 and the Party Liberation Front, had never been inside the stadium.

“I’ve lived in Richmond since 1998, and this is the first time I’ve been in the baseball stadium,” he told RVA Mag. It’s great to see color come to somewhere that I’ve personally felt is drab, that I’m not attracted to. But as we know, art attracts lots of different kinds of people to a space that they may not have ever been before.”

Indubitably, the Street Art Festival at The Diamond will bring together crowds of sports fans and art lovers, bridging the gap between two important Richmond subcultures.

In it’s own way, this city space now exists as a grand-scale gallery space for patrons to peruse during baseball games. And inevitably this will foster a unique sense of engagement when people experience the stadium in the future. Street art liberates creative expression from the traditional art world or the way one would encounter art at a gallery, making for a more accessible and casual experience. Having these types of works in the stadium’s milieu fosters a newfound convergence of creative and recreational space for everyone in Richmond.

Some other photos from the RVA Street Art Festival can be found below.