Richmond, Virginia is a cultural leader in art that doesn’t receive the attention it deserves. From its spirited First Fridays highlighting the art and expansive music scene in the River City, the local sound is only growing with the help of streaming services and multiple festivals popping up overnight. Still, there is an outlet that continues to be the best gatekeeper of sorts to listening to music out of the mid-Atlantic region.

With well over 20 years in the music radio profession, RVA legend Jay Smack has dedicated his life to promoting and supporting artists from Richmond and its surrounding areas with his show Studio B. Whether it was through radio in the ‘90s to podcasting now, Jay has been the go-to name in introducing people to some of the best talent Richmond has to offer.

“When I first started out with the show I just graduated from VCU as their program director at WVCW,” Smack exclaimed as he laid out the origins of the show. A radio station in 106.5 The Buzz (now 106.5 The Beat) were hungry for new content, especially that of the local kind and Jay was the easiest choice for the pick.

“At the time I was a drummer for a band and the execs at the show saw me as someone already within the local scene so it made sense.”

For Jay Smack and Studio B, the show was initially held within an hour time limit and got off to a roaring start due to live performances from bands. There were definite growing pains early on though. Working with such stringent limitations and a conflicting equipment made for a number of issues according to Smack. “Sometimes the bands wouldn’t know how to get the performances down pact as the environment was new to them and wanted to record a certain way. Eventually, we had to keep certain things pre-recorded to meet the time constraints.”

Studio B would be on 106.5 The Buzz until 1999 when the frequencies changed and the show was moved to 102.1 XL Radio. “They brought me in at first as a producer and mixer to the station and proceeded to have the show there for a few years until about 2005,” he remembered. “At that point, I told the folks there that I want to still do the show, handle all the production and recording, and keep it at a length that was required of them.”

Within that time, Jay would record the show in various studios across Richmond, including Scott’s Addition with Steve Barber. Around 2009, Jay would begin transitioning Studio B into a podcast along with the radio show, expanding the time after the radio broadcast to give local artists from the growing scene more time and exposure. For a show that’s focused on the intimacy of the small-level artists, Jay’s ambitions have the sights set on a larger goal.

“I know that the best way for this show to get better is to grow with the scene,” he revealed. “There’s never enough music out here in Richmond and the surrounding that’s untapped and finding the time necessary to do it is what I want to accomplish.”

Creating a podcast to do away with the restrictions of radio is just the start. Eventually being let go from 102.1 due to downsizing, Jay Smack took Studio B head on as a podcast show, operating on Mondays and Thursdays. With the current sweeping change in the music industry, the middleman between label execs and the artists are becoming a non-factor. For Jay Smack and many of the music consumers, that is something they are taking notice.

“A lot of fans and listeners are becoming more specific with their tastes and making them smarter with how the industry operates,” Smack explained. “As a result, many execs are controlling less and less as artists and fans have more control.”

With growing streaming services in Spotify, Tidal, and Apple Music, artists can promote themselves in an easier fashion, communicating with their fanbase through social media and build their brand through means without the help of corporate bigwigs. It is still an uphill battle when it comes to revenue, however.

“The hustle for the modern independent musician is a given,” Smack remarked. “That’s always going to come with the territory though it will be tougher getting things done on your own. I’m still a firm believer of recording through a studio, but it is so much more convenient now getting your art out there to the masses.”

While Jay appreciates the advent of streaming services giving additional exposure to local acts, he does not see them as a revenue route for them. “Artists will barely make a percentage of a penny from their music, yet these places will make as much as they can off of them. I would rather do my part in helping these artists grow by giving them money.”

Jay often studies and researches dozens of artists before playing them on the show to go along with taking requests from associates and fans of the show. He also buys many of their own songs to further support the artists in his quest to being a voice of local independent music.

“I feel better about myself buying their music and helping them out knowing that they buy a lot of their equipment out of their own pocket to even create their art,” he divulged. “Spending my money on them shows a stronger link of solidarity than just giving them a thumbs up and help more artists that giving their music out for free.”

When it comes to the process of making these shows, Jay admits that it can be a hassle trying to put so much music in within little time. Unless consumers mainly know the artists, it would be hard for them to listen to relative unknowns for 45 minutes.

“For keeping a low profile for so long, that really was the only difficult aspect of the show,” he laughed. “But for me, I got into radio and music because I love it and I want for it to grow. There’s still much to learn in due time and if you have the drive to do it, it is easy to do your part.”

RVA Magazine #30 drops today, and it is packed with our most compelling content and photos to date. It’s an overloaded issue that explores & analyzes the styles, sounds, and issues at the heart of Richmond and its surrounding area. 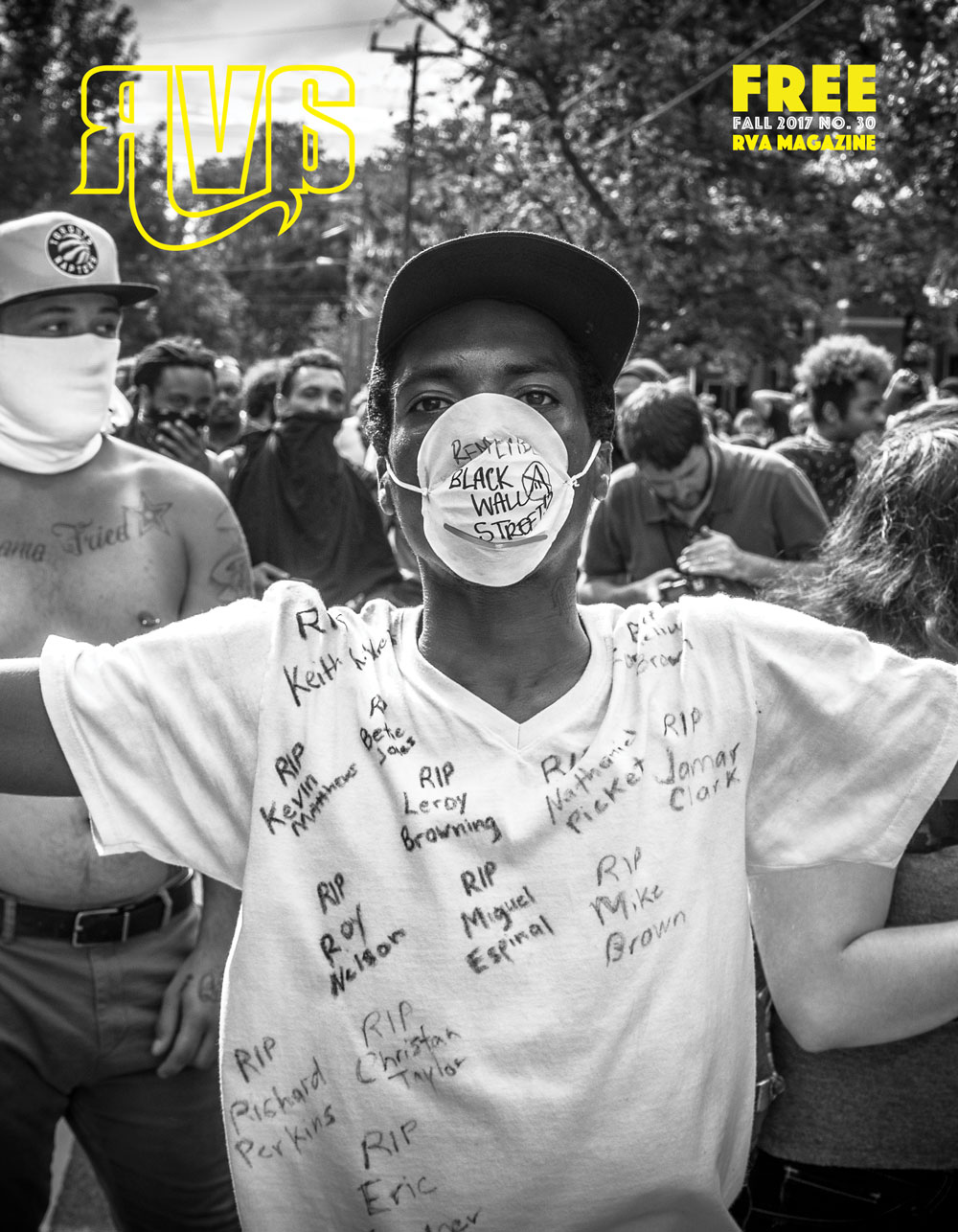 Brought to you as always from journalists & writers entrenched in the scene, our coverage continues RVA Magazine’s history of incisive and pulsating coverage. For those wanting an accurate depiction of the cultural landscape at the center of Virginia, look no further than RVA #30 and the style guide it will definitely provide. 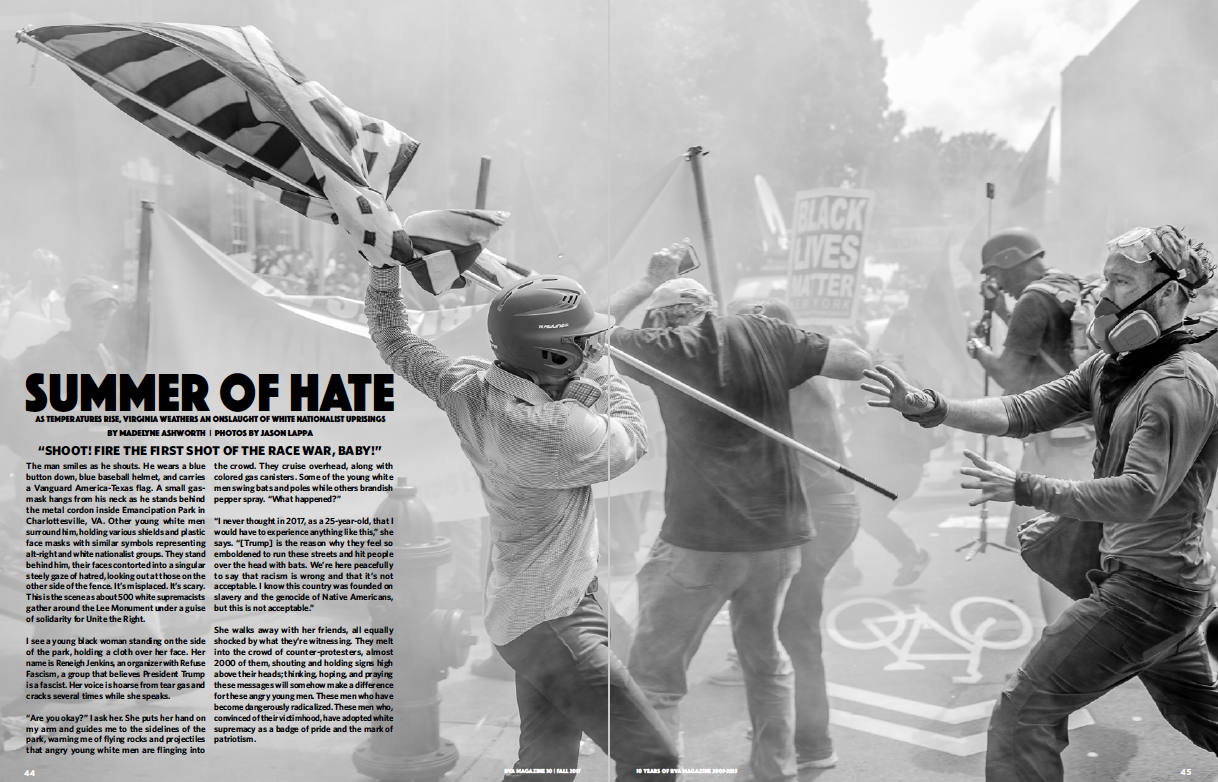 The recent Summer Of Hate will be a focus of RVA #30, with plenty of first-hand accounts and photos from the events of the last few months in Charlottesville as well as judicious and affirming analysis from our political pundits. We examine the rise of hip-hop auteur McKinley Dixon to the top of Richmond’s local scene, bring you the story of long-running radio program Studio B from the local legend himself Jay Smack, and the eerie sound of hardcore band Prisoner. 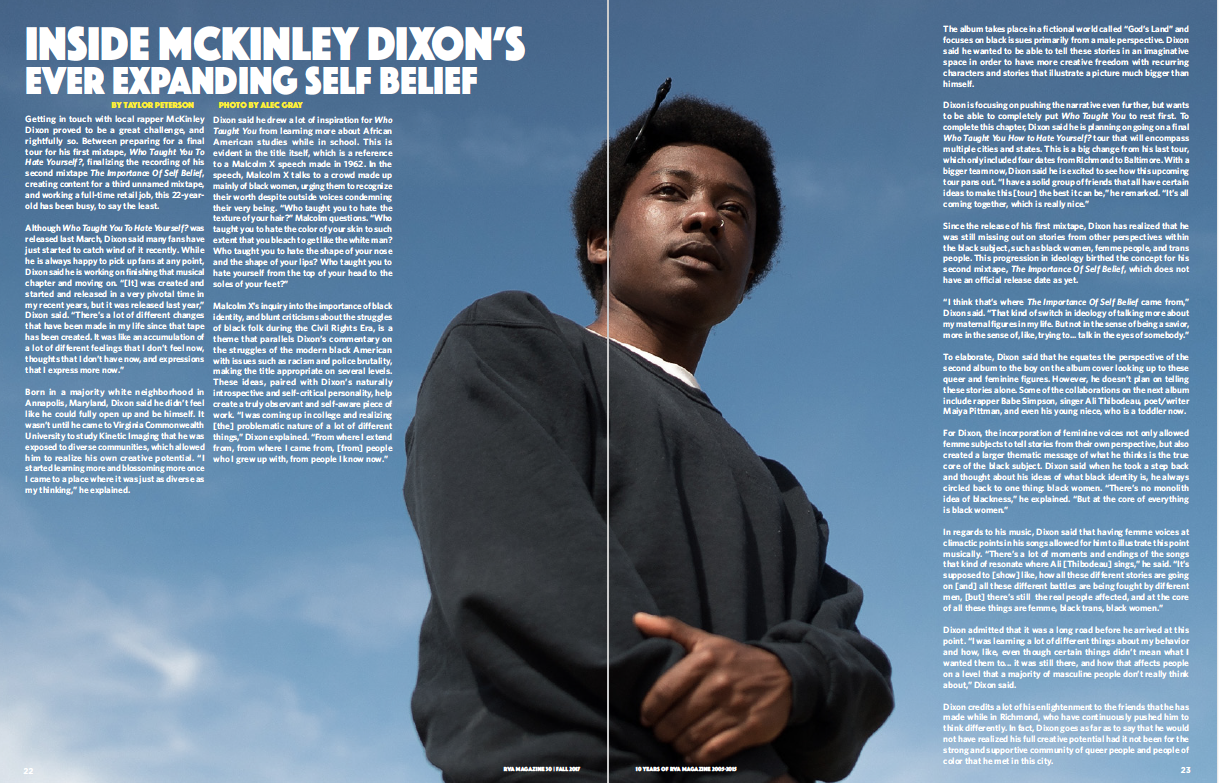 On the arts side, we look at the vitalizing work of local street artist Nils Westergard and peer behind the lens with a profile on Yemeni mixed media artist Asiya al-Sharabi. 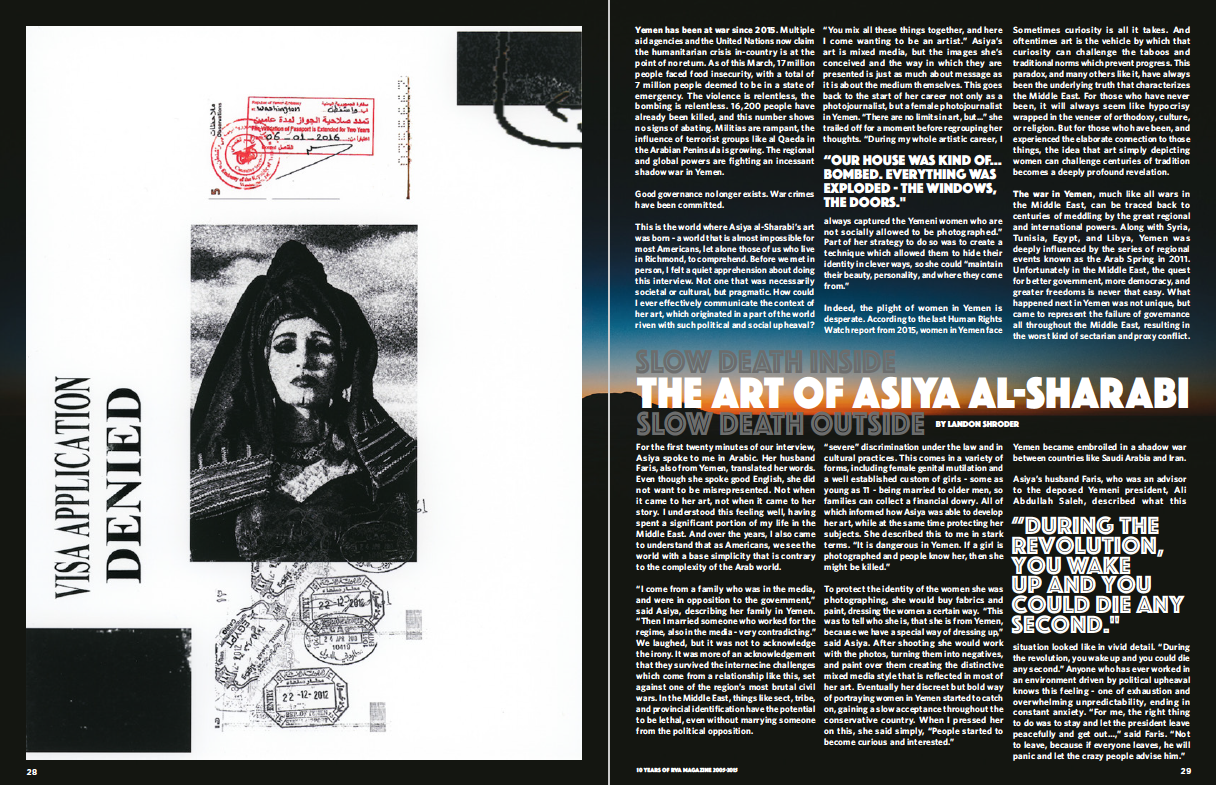 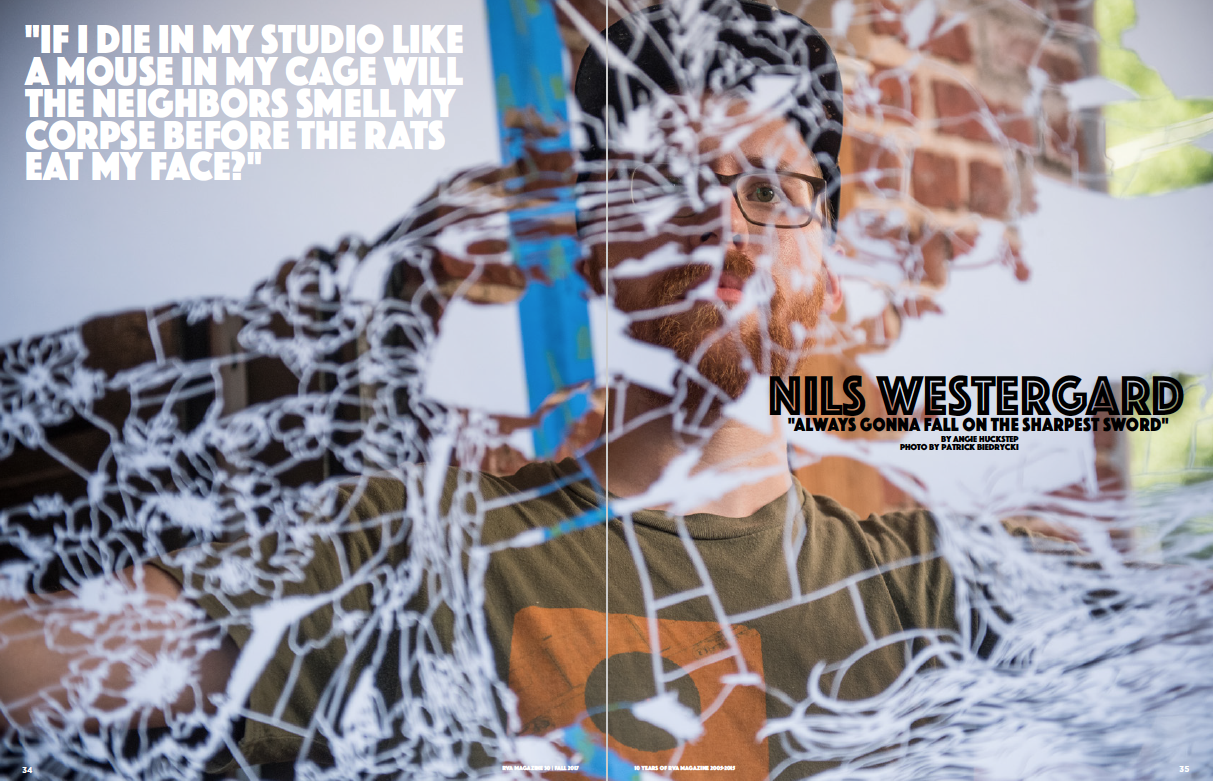 In this installment of GOOD EATS RVA, we catch up with Nate Mathews of Nate Bagel’s, the man behind Capitol Waffle Shop downtown, and an in-depth look at Kabana Rooftop Executive Chef Mike Ledesma’s career. 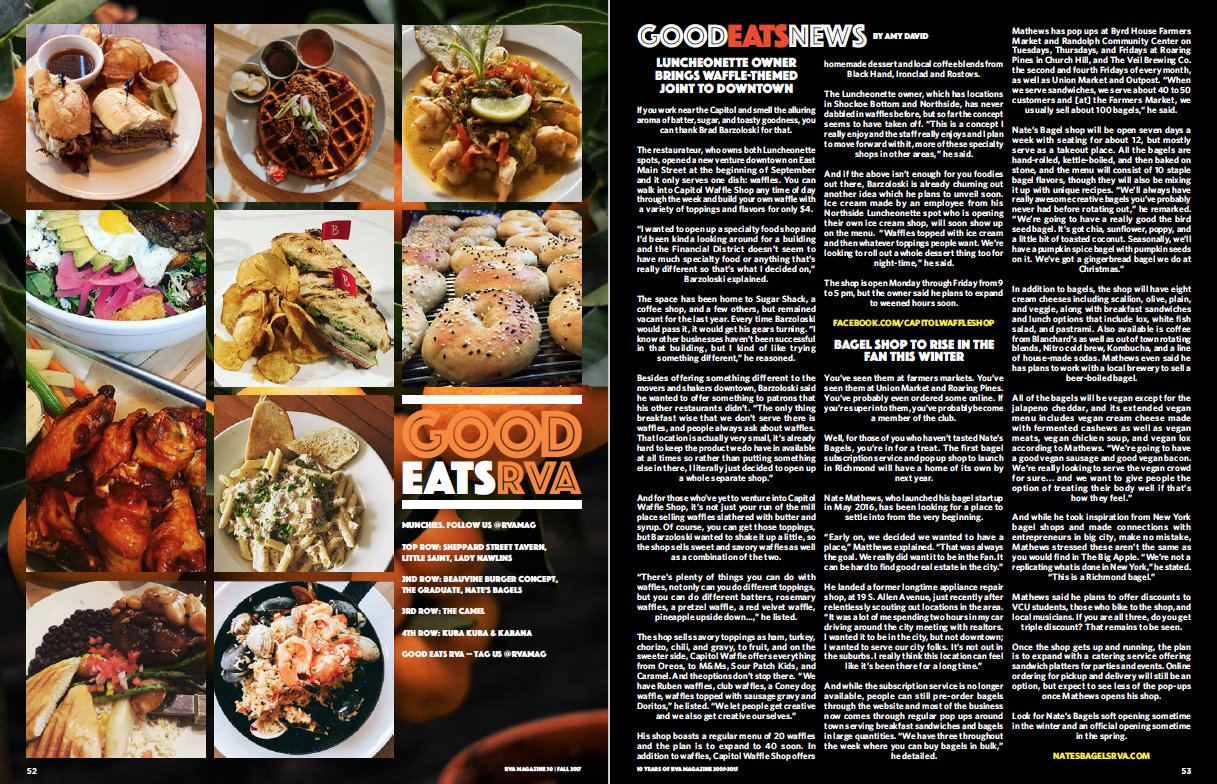 In addition to these stories and profiles, the next issue contains our prominent and expanded coverage of craft beer, studio news, and music reviews as well as our emerging photography series showcasing the work of talented local artists and our continued coverage of the burgeoning local fashion scene and its trends. 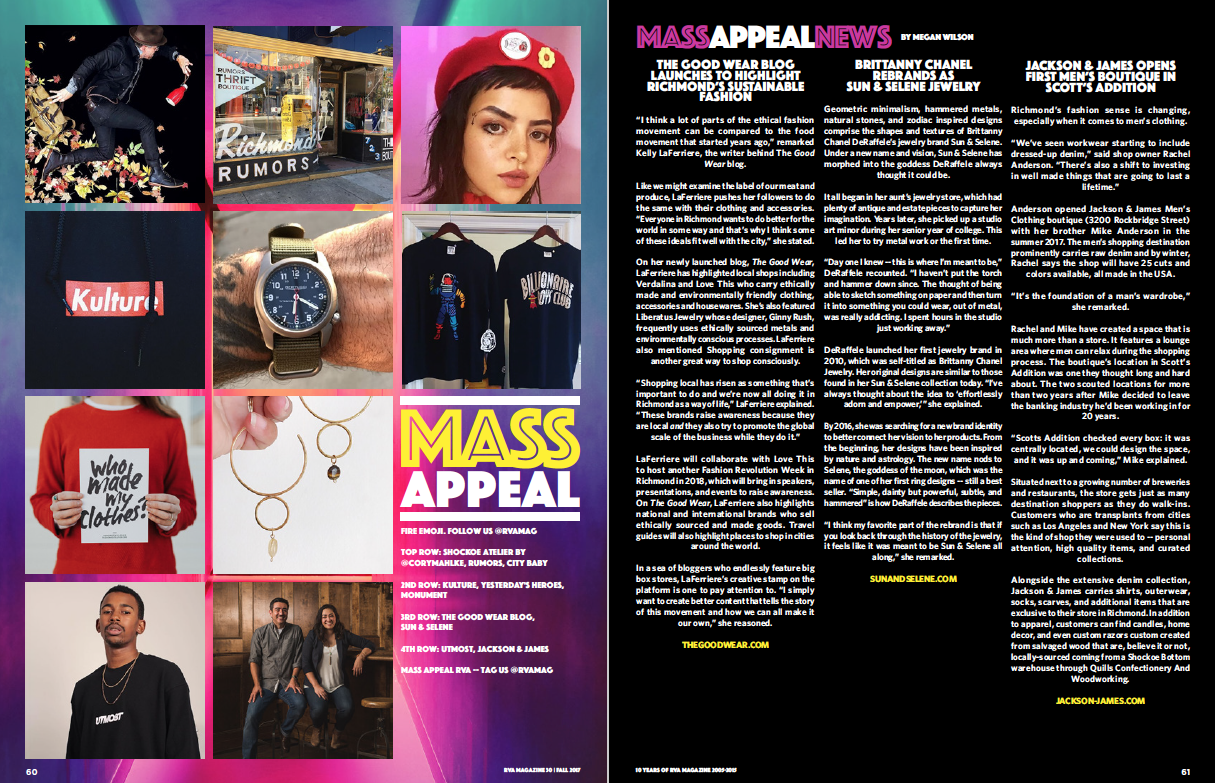 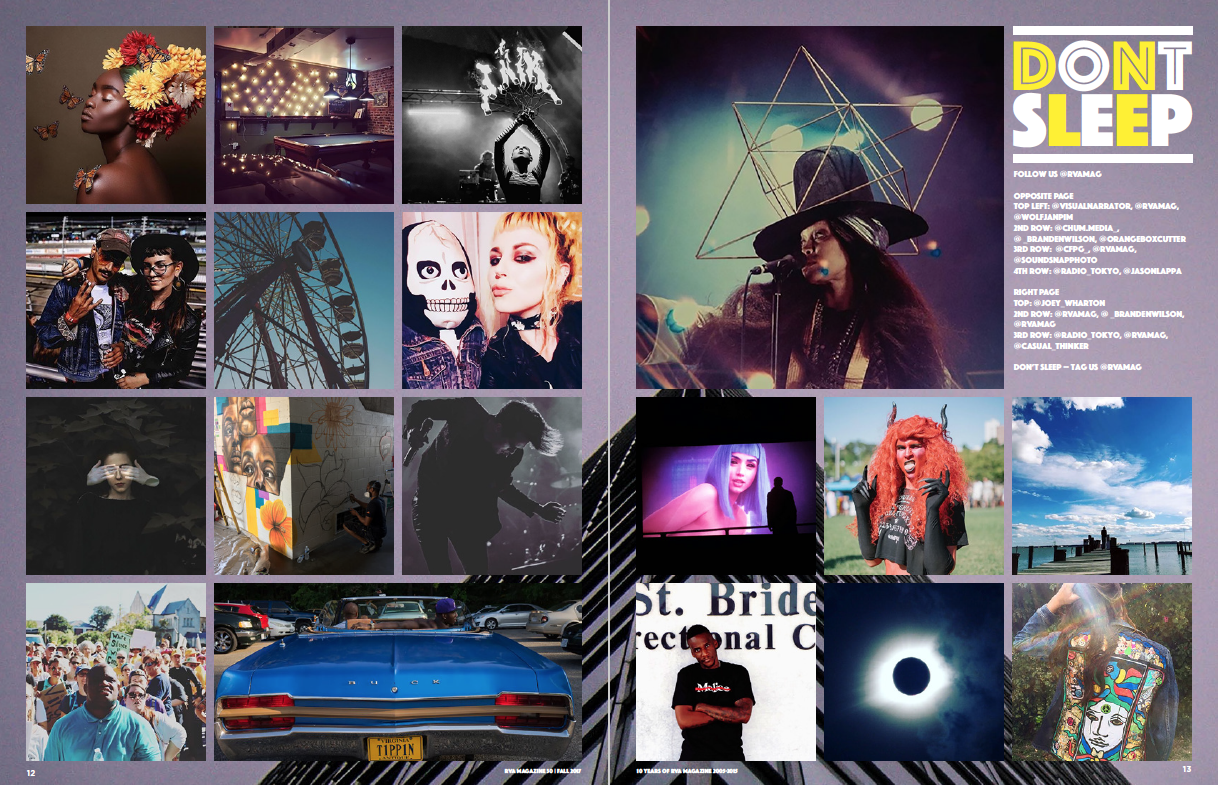 Keep an eye out for the new issue as our friends at Quickness RVA continue their distro-deal with us as well, further pushing RVA Mag into a modern, green future.