A leading artist of the 1980s “Lowbrow” movement is visiting Virginia, and his exhibition at the Virginia Museum of Contemporary Art (MOCA) is his first solo show in almost a decade. Todd Schorr’s paintings are staples of pop surrealism, populated by classic cartoon and comic figures from the mid-twentieth century. Todd Schorr: Atomic Cocktail is Mickey Mouse, Mr. Peanut, and the fairytale grotesque like you’ve never seen them before.

“I was among a handful of artists in the mid 1980’s who began exhibiting paintings in galleries…that combined a common influence of imagery derived from old comic books, early cartoon animation, horror and sci-fi movies, hot rod culture, and psychedelic poster art,” Schorr said.

Growing up in the late 50’s and early 60s, Schorr was inundated with the constant looming threat of nuclear warfare.  From “Duck and Cover” drills in school, to the culmination of the Cuban Missile Crisis, his work combines the tension of those decades with the popular visual culture of the era.

Fusing the influence of Renaissance masters like Salvador Dali, and early animated cartoons, Schorr created a cocktail of psychedelia and surrealism. These often autobiographical works take us into the looking-glass-esque world of the bizarre. He communicates through a synthesis of childhood experience, and the pervasive visual culture that shaped it.

Schorr said that the basis for what we consider pop-culture began at the turn of the 20th century.

“This is the visual language that every generation since then has grown up in,” he said. “I do firmly believe that the cartoon is the strongest form of graphic art of this century.”

MOCA curator Heather Hakimzadeh, says that despite growing from the same 1950s roots as its creator, the exhibit will appeal to everyone.

“He definitely does come from the viewpoint of someone born and raised in midcentury America. But I feel like so much of the imagery that he’s given us is universal, and has imbedded itself in our culture,” said Hakimzadeh. “Everyone can recognize things in the work that will build connections.” 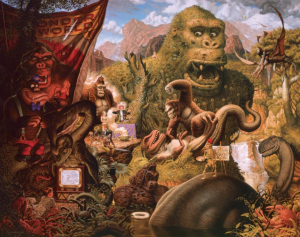 Schorr’s exhibit contains a narrative flow that will allow viewers to connect the pieces within the context of their own stories, and provides a commentary on the endurance of visual art in our modern world. Our children are raised on popular iconography, and the generational consequences of these works bleed through decades.

“I think about where we are now, in 2018, Western society, and the image production that we do right now: millions of images, created all the time, by everyone,” said Hakimzadeh. “I think about our own children and future generations, and what shapes them. These images, and the things [Schorr is] showing us created who we are. We’re looking back to look forward.”

These early- to mid-century cartoons, comics, and classic films shaped our school principals, our heads of corporation, and the baby boomers who are in congress making policy, said Hakimzadeh. She wonders how the imagery our children see every day in our age will affect who they become as the next generation.

Despite it’s universal, monumental implications, Hakimzadeh said one of the best things about the exhibit is that it is accessible to everyone.

“Contemporary art can be intimidating. People come into the art space and they’re expecting white walls, no didactic and learning tools, to see something plain and simple on the floor and not understand it,” said Hakimzadeh. “Instead, people are going to go in and see things that resonate, that have meaning for them.”

The exhibition will show works new and old, from Schorr’s classics, to sculpture, to never before exhibited paintings. Among these is No Solar Power for Fairyland, which Schorr calls “a take on the distribution of available power sources,” and includes “a compressed history of graffiti which runs along the bottom portions of the fairy tale buildings starting with the earliest cuneiform characters.”

“When you go see a painting in person, you see things you’re never going to see in a little tiny screen. You’re going to have an experience that’s vastly different,” said Hakimzadeh. “I think people are going to come in and connect this this, and know work is being made about their life, and the imagery that has made their life.”

Alongside the show, Schorr is promoting his new monograph, Neverlasting Miracles. Todd Schorr: Atomic Cocktail runs through December 30 at the Virginia Museum of Contemporary Art in Virginia Beach.

All of the works in the group exhibition have been altered through digital manipulation, but each one has been “chopped” or changed through some medium whether it be illustration, deconstruction, collage or surrealism to present a new perspective.

“The current show is a little bit of an outlier. It’s half and half [outlying and traditionally what is done],” said Gordon Stettinius, owner of Candela Books and Gallery. “Sometimes we say, ‘we like so-and-sos work a ton, let’s see if we can get that work in the gallery,’ and it really is a solo show or a two-person show comes around because we admire someone’s work.”

Stettinius added the gallery is hoping to introduce notable artists from all over to Richmond to try to “bring a little more awareness to what contemporary photography is.”

Artists from all over were asked to contribute their work including Nadine Boughton, Tom Chambers, Peter Brown Leighton, Lissa Rivera, Ayumi Tanaka and Maggie Taylor, and Richmond’s own Blythe King.

Ashby Nickerson, Associate Director at Candela Books said they started talking about the idea about six months ago and she said the owner was able to narrow down what artists to showcase.

“Gordon travels around and goes to a lot of portfolio reviews and photography gatherings across the country,” she said. “So he had met a couple of people who he had seen their work in a couple different ways and had kind of brought them to the table. There were a few that I knew, one Blythe King, who was a Richmond artist.”

Blythe King’s work is similar to her counterparts in the show in that she creates new images through the recycling of older ones. What sets her apart is her collages and how it incorporates her affinity for old catalogs from the 1940s.

“I happened upon an old Montgomery Ward mail order catalog from the 1940s at a yard sale in my neighborhood in Church Hill,” said Blythe King, a local artist originally from Pittsburgh. “I have been really captivated and fascinated with the imagery in these old catalogs ever since. I’ve amassed a huge collection of these catalogs and feature the fashion models from these catalogs in my work.”

Candela Books & Gallery held an artist talk March 2 and during the talk, King mentioned her work is a seamless culmination of her interests.

“[I] talked about how my work is this interesting combination of three of my seemingly unrelated interests: popular culture, religion and Japanese art.”

King’s work can currently be found in galleries across Virginia including a piece in the Virginia Museum of Contemporary Art in the New Wave Show.

The artist explained to RVAMag and audiences at the Art Talk how her take on photography mirrors her talent for collages and design.

“The way I manipulate images is through image transfer, which I combine with elements of collage photography and calligraphy,” she said.

“Throughout the 20th century, photography, like a one-celled organism, evolved on a relatively linear path from one stage of development to another,” he said. “The advent of digital imaging alternatives upset that equation.”

Brown’s work has frequently been shown in exhibitions held in Candela Books and Gallery. One of his pieces was bought for the personal collection at the gallery and landed him the connections to be brought back for Chop Shop.

His attention to his craft has led his work to be shown internationally. “This coming June I’ll have 40 prints showing at the Promenades Photographiques de in France,” he said.

The gallery also incorporated the artwork of Tom Chambers, a Pennsylvania native who worked for years as a graphic designer, into the exhibit which frequently features his daughter or her friends and aims to catalog or capture the growth of an adolescent girl into a young woman.

“The oldest piece of mine is Springs Landfall, 2006, which depicts a girl in a boat of flowers ‘landing’ in a Winter field,” he said. “My newest image is, “Edge of a Dream,” which depicts a white tiger walking down a village street. Both images employ magic realism, which expresses a realistic view while also adding magical elements.”

“The thoughts about the work sort of command when you think about all these people in the room together- the work of these different artists somewhat support each other, somewhat challenge each other,” said Stettinius. “There are a couple of people who arguably may not even be photographers but they sit very comfortably in this show we feel.”

This non-traditional photography has sparked quite a bit of conversation and questions with guests, according to Nickerson.

“I love when people come in here and ask, ‘how is this a photograph’, we get that a lot,” Nickerson said. “That is always exciting because we get to explain whether or not if it’s an old process or new process, however they are doing it to say that this started somewhere in photography and they are taking it somewhere else. They are adding to it.”

Inspired by the psychedelic and surrealist painters who came before him, Richmond-based artist Donnie Green paints pop culture icons from a critical perspective in a style that is meant to entertain and intrigue viewers.
END_OF_DOCUMENT_TOKEN_TO_BE_REPLACED

The infamous Salvador Dali has graced Richmond with yet another short visit.
END_OF_DOCUMENT_TOKEN_TO_BE_REPLACED