FEATURED SHOW
Friday, January 5, 8 PM
Asylum, Incisor, Essex Muro, Future Terror @ Strange Matter – $8 (order tickets HERE)
It’s never too soon for the new year to start bringing us new records by great local bands–and the first big record release show of this year will be taking place at Strange Matter this Friday night. It will welcome a brand new LP by Asylum, who’ve been raging across the RVA scene and well beyond for years now, but are just now getting around to unleashing a full-length slab of vinyl upon us all. Modern Hysteria is the latest release from Vinyl Conflict, the label helmed by the people who bring you the punkest record store in town and are always on the ball where releasing excellent records by local hardcore punk juggernauts are concerned.

They’ve really come through this time, too–Modern Hysteria is a true rager that conjures up equally potent dark metal and powerful crust-punk vibes. It is redolent of classic influences like Motorhead and Discharge (the band’s acknowledged inspirations), as well as more modern sounds like Tragedy and Wolfbrigade. None of this is really a big surprise, considering that Asylum released an EP full of similar sounds a few years ago on Vinyl Conflict, but it sure is a welcome development.

A ripping set from Asylum is not all you can hope for where this show is concerned, though–two killer out-of-towners will also be joining in the fun! Philly’s Incisor have a similar metallic punk drive as Asylum, though there are definitely melodic touches underlying their crunchy riffs, which always adds a nice texture. Then there’s North Carolina’s Essex Muro, who released a full-length cassette with Sorry State last summer and have evolved from their early dark psych-punk into more of a goth-tinged take on heavy punk. Pretty cool stuff, as will be the opening set from Future Terror, who’s pedal-to-the-metal fuzz-overload take on D-beat is strongly reminiscent of late, lamented DC/RVA punks Aghast. This is gonna be an excellent show–don’t miss it! And bring a few bucks for an Asylum 12 inch while you’re at it. 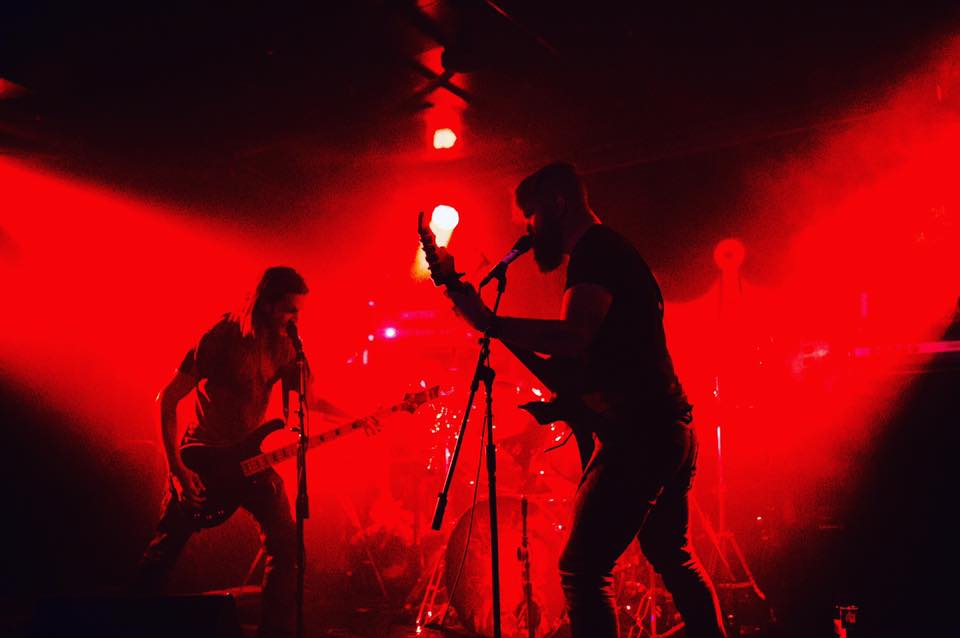 Wednesday, January 3, 7 PM
Infernal Coil, Disintegration, Fetus Omelet @ McCormack’s – $5
From metallic crust to brutal grind–we’re really traversing the genres this week. But hey, a good solid dose of blast beats never hurt anyone, right? Plus, it seems like the grind/crust/metal scene is the only one staying reasonably active over the holiday season (perhaps not too much of a surprise for the genres that care the least about religious holidays, I suppose). So it makes sense that only a couple of days after the new year, grind bands have tours that are in full swing and taking them to the other side of the country.

Enter Boise, Idaho’s Infernal Coil, who practice a particularly dark, blurry form of hyperspeed low-end devastation. Recent single “Bodies Set In Ashen Death” tells you a great deal of what you need to know about this band just from its title, and gets the point across the rest of the way with its killer riffs, black-metal-ish ambience, and frighteningly guttural vocals. I wouldn’t expect the lights to be very bright during this band’s set. Infernal Coil will be joined over at McCormack’s by locals Disintegration, who’ve done a lot to make theirs one of the most recognizable local names in the grind genre; and Fetus Omelet, who fulfill the unwritten requirement that every grind show must feature at least one band with a cartoonishly grotesque name. 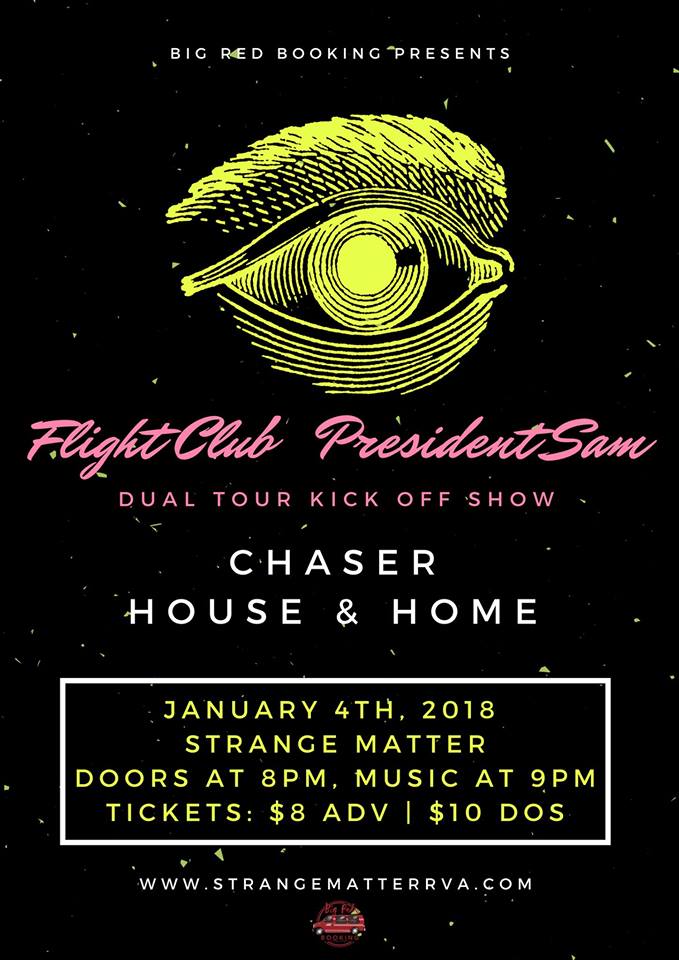 Thursday, January 4, 8 PM
Flight Club, President Sam, Chaser, House & Home @ Strange Matter – $8 in advance/$10 day of show (order tickets HERE)
This should be a huge blast. I’ve been keeping an extremely close eye on the local scene for years now, mainly because I have to write this column every week and I want to do a decent job. (Do I? Don’t answer that.) I’ve been hearing the name Flight Club for a while now, and while they’ve never seemed to cross over into the more “hip” segments of the scene, I’ve noticed that they’ve done a lot of hard work to get their name out there and build a fan base. Now they’re about to head out of town on a joint tour with fellow RVA crew President Sam, and it’ll be interesting to see if they can grab some new listeners before they head out of town.

They certainly deserve to. Their Kinda Funny EP, released last summer, was a refreshing jolt of killer rock n’ roll riffage that stayed just this side of over-the-top due to some real emotional heart underlying the whole thing. If you’re a diehard local music fan who loves Lightfields and misses Imaginary Sons, Flight Club is totally your new favorite band. Meanwhile, President Sam is a newer band with a bit more of a typical pop-punk sound, but they share that same subtle emotion beneath the surface that makes Flight Club so relatable, so if you dig one of these bands, chances are you’ll love them both. A bonus set from Florida’s Chaser, who’ve got a bit of a chunky rock n’ roll edge to their melodic hardcore, will push this show to an even higher level. Get on board. 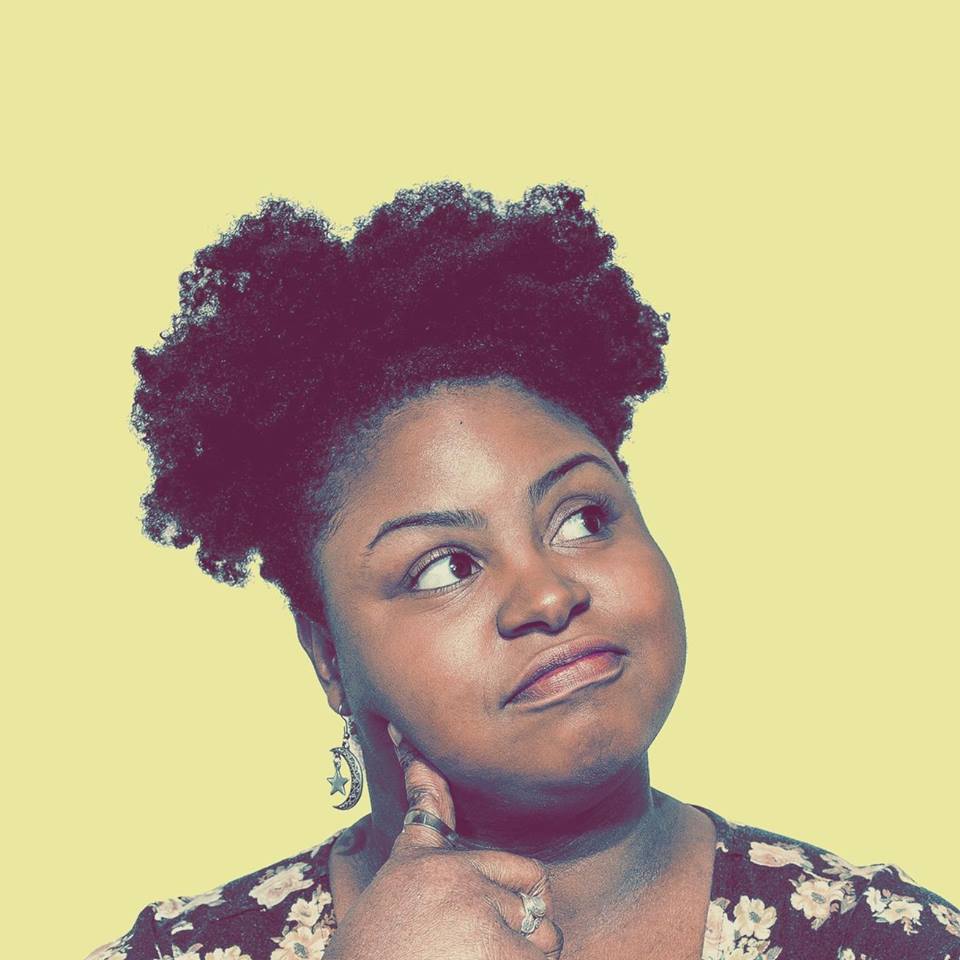 Friday, January 5, 6 PM
Kenneka Cook, Steven Boone, Calvin Brown@ Hardywood – Free!
Here’s how you start your new year off right–by kicking off the first weekend of 2018 with a killer show happening over at Hardywood. It’s a great atmosphere, the food and drinks are top-quality, the price is certainly right, and to top it all off, the night will feature a headlining set from Kenneka Cook. This soulful singer has been charming the entire city with her sweet voice for a while now, and she’s currently gearing up to release her first LP, Moonchild, due next month from American Paradox. We’ve only heard one song from the new album, but unless it’s a total outlier, the whole thing is sure to be a charming trip through her killer repertoire, mingling classic soul-jazz sounds with modern synth-driven R&B touches.

The song we’ve heard, “Don’t Ask Me,” was written for Cook by local impresario Pete Curry; Cook has also been known to break out tracks by artists like Vampire Weekend, so she’s clearly open to a wide range of sounds. Perhaps this is what gives her music such an excellent dynamic range; regardless, it’s got one, and you’ll see it on display Friday night at Hardywood. End your work week with a smile. Opening sets from local soul man Steven Boone and vocal virtuoso Calvin Brown are sure to sweeten the pot and give this evening the qualities of a cool, smooth breeze. 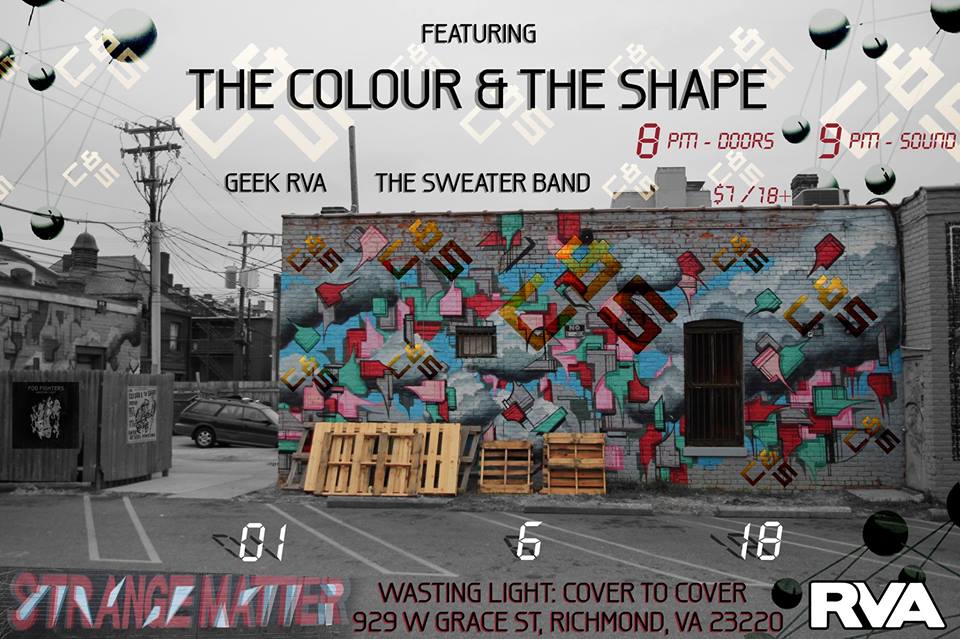 Saturday, January 6, 8 PM
Cover to Cover Night, feat. The Sweater Band, The Colour And The Shape, Geek RVA @ Strange Matter – $7
The holidays may be over for most of us, but that slowed-down end-of-year vibe still hasn’t fully gone away, so it makes sense that the music scene is still indulging in its tendency to get into some off the wall shit around the holiday times. This Cover To Cover Night show at Strange Matter might have felt a little more at home on the calendar last week, but it’s just as much of an unexpected treat this Saturday night, as three different local tribute acts come together to dish out three full albums played start to finish, ATP/Don’t Look Back-style, for your listening enjoyment.

Long-running local Weezer tribute act The Sweater Band has picked Pinkerton, of course (the only other remotely viable choice would have been the blue album, in my humble opinion). From “Tired Of Sex” to “Butterfly,” the warmly-dressed men of The Sweater Band will explore the crunchy riffs and vaguely creepy lyrics that emerged from the fertile mind of Rivers Cuomo over 20 years ago. Then The Colour And The Shape will run through Wasting Light, the 2011 Foo Fighters slab, and the first to feature both Pat Smear and Chris Shifflett on guitars. This one will get loud. Finally, Smashing Pumpkins invokers Geek RVA will start their career by attempting a trip through the mammoth epic that is Siamese Dream. Which means they’re gonna do “Mayonnaise” AND “Silverfuck.” I for one can’t wait. Let’s party! 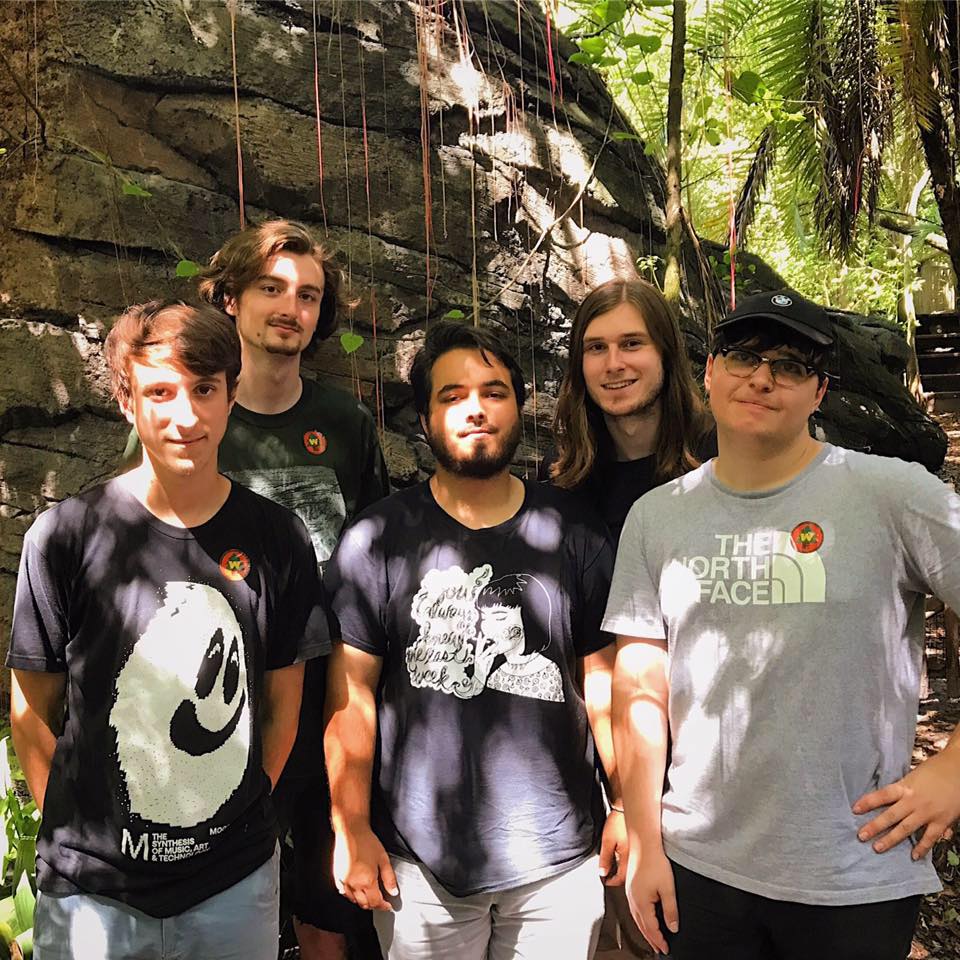 Sunday, January 7, 2 PM
Cheem, The Mineral Girls, Big Baby @ Hardywood – Free!
We’re headed back to Hardywood for the second time in a single weekend to enjoy a rad matinee show that kicks off so early, chances are you’ll be able to head straight over from brunch! Not only does it feature amazing local trio Big Baby, of whom I am sure you’re highly aware (and highly stoked about) by now, it also features a couple of excellent touring acts. The first of these is Cheem, a Connecticut five piece with some energetic melodic indie rock tunes that are sure to get you moving your feet and grinning like an idiot. The proficiency, talent, and creativity this band displays on new LP Downhill is sure to make for an incredible live show, so be sure you’re there to see it–DVR the football game.

You’ll also want to catch The Mineral Girls, who come to us from Charlotte, NC and, unlike many other bands with “girls” names, actually feature one woman in the band. That’s something, right? The real reason to see this band, regardless of their gender makeup, is their off-kilter song construction, which harks back to the days of “slacker” indie bands like Pavement and Dinosaur Jr. Their recent LP, This is the last time every time., is a wide-ranging, hypnotic listen, with a unique guitar sound that catches your ear and refuses to let go. This band may not be as upbeat as Cheem, but they have an unstoppable energy all their own, one you’ll want to make a part of your Sunday afternoon. Don’t sleep too late, you don’t want to miss it all. 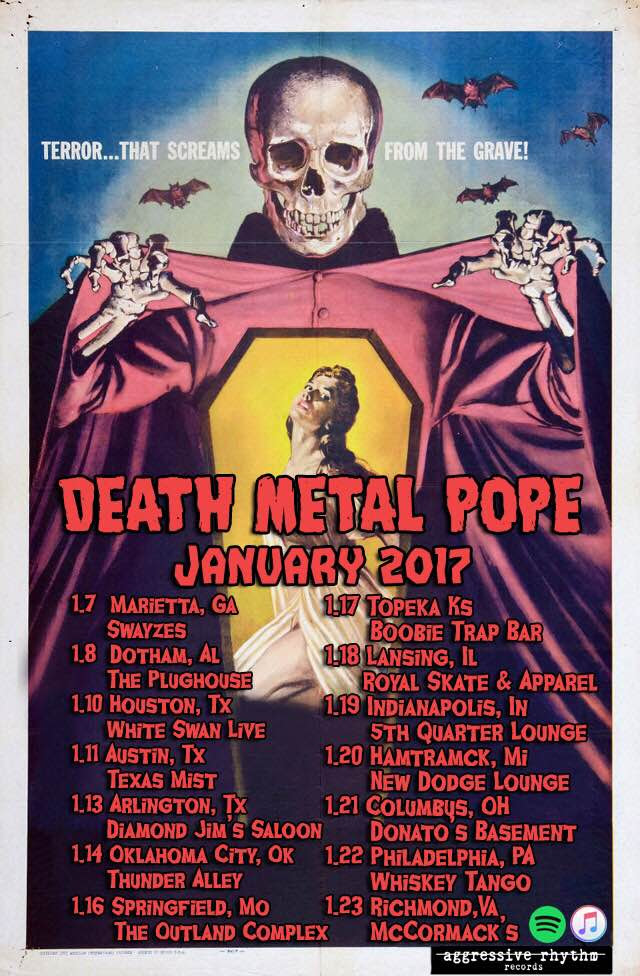 Monday, January 8, 8 PM
Death Metal Pope, Graviton, Voices In Vain, Black Acid Ritual @ McCormack’s – $5
Death Metal Pope might not be the sort of name you’d expect a touring band with multiple releases under their belt to use, but rest assured, this band is not joking around. They also aren’t too much like any band you’ve heard before; their horror-focused imagery reminds me of the Misfits, but musically they’re at least somewhat doom metal in tone. That said, the bombastic riffage and vocals are at least as reminiscent of the Melvins as they are of Pentagram, who they cover on their 1922 EP (which features Nosferatu star Max Schreck on the cover and is named after the year that film was originally released–I see what y’all did there).

DMP is currently on tour with Graviton, who’ve definitely got a bit more spring in their step, as they approach outright thrash from a Helmet/Prong-style modern American metal perspective. Honestly, despite being from a completely different scene, I feel sure this band would appeal to everyone who dug the metalcore sound of the early 2000s–think Unearth or early Killswitch Engage. Vermonters Voices In Vain add their more progressive yet still incredibly heavy sound to the bill, bringing joy to the hearts of Meshuggah fans everywhere. Locals Black Acid Ritual will round out the bill with some doom/sludge style sounds. Get ready for some serious headbangs.