After walking 70 miles along Route 250 from Charlottesville to Richmond, the Dreamers of Virginia came to their four-day journey’s completion at the Bell Tower this afternoon.

This small, Virginia-based organization focuses on immigration rights in America and advocates for protecting immigrants and their families. The Dreamers made their trek through Central Virginia to stand against President Trump’s threat to repeal the Deferred Action for Childhood Arrivals act (DACA) and Temporary Protected Status (TPS).

“DACA has been the first victory we’ve had in over 30 years,” said Lizzette Arias, the deportation defense co-leader with Dreamers of Virginia. “Finally, after so much organizing, we get DACA, and now that victory is going to be taken away. We can’t just sit and watch it be taken away.” 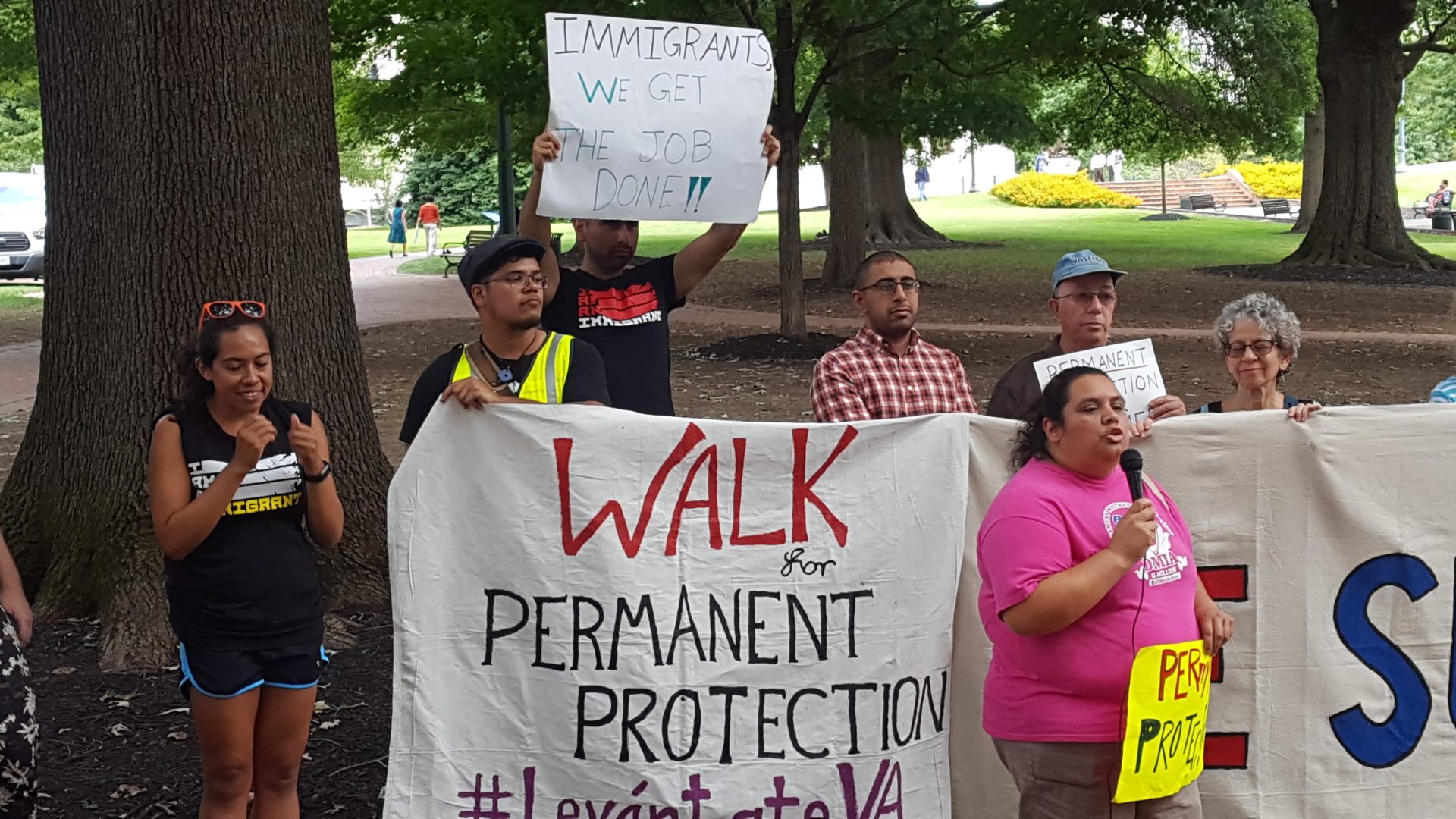 The group of 10 walked between eight and 12 hours per day, taking only an hour lunch break and sleeping in various houses throughout their walk. Volunteers opted to allow the Dreamers to stay the night, many of them members of the clergy, such as a minister’s house.

“I felt like it was the least I could do for the immigrant community,” said Reuben Chavez, one of the walkers. “My mom is an immigrant, two of my sisters are immigrants and I have a lot of family that are immigrants. It just makes sense to do something for them and give back.”

Each walker took on various tasks to ensure the safety of the entire group, from ensuring they stayed on schedule to something as simple as carrying speakers down the road to provide music for their hike.

Much of the road on Route 250 isn’t easily accessible to pedestrians, as the group was forced to walk single-file for several miles along the route without sidewalks. Fortunately, no one had any serious issues and they made a safe journey to Richmond.

“We have some nasty blisters, let me tell you,” said Arias.

Arias benefits from DACA as her parents traveled to America as undocumented immigrants from Bolivia to search for better opportunities for themselves and their daughter. Many of those who walked to Richmond have family members who are immigrants.

“My mother was an immigrant,” said Jeffrey Fuentes, another walker. “When she came to this country, she had to leave my older sister behind for an entire year before she saw her again. Then my sister came to this country. I think it would be ignorant for me to see what they went through and me not do anything or close the door behind everybody else struggling to get over here.”

In 2012, the Obama administration implemented DACA as a new policy for undocumented immigrants who entered the country as minors to ensure a waiting period of two years before threat of deportation, as well as eligibility for a working permit. Unfortunately, recent statements from the Trump administration suggest the end of the program is near.

“All of us walking agree that we want permanent protection and dignity for everyone, all 11 million undocumented immigrants here,” Arias said. “That’s why we walked. We can’t sit and wait until stuff happens for us, we have to demand it.”

The perceived threat of immigration is one of the many things a recent outcropping of white supremacist groups have used as a platform for their ideology, however, the Dreamers of Virginia hope to send a message of determination, acceptance, and respect for themselves and other immigrants.

“If there’s someone behind you like there was for us in the walk, it’s possible,” Arias said. “You can walk 70 miles. You can do it. You can do anything.”