In a demonstration of communal solidarity, nearly 80 members of the VCU School of the Arts (VCUarts) community gathered in front of VCU’s Cabell Library Friday morning in support of fair pay for adjunct professors.

The ‘Adjunct Fair Pay Rally’ was organized after over 1,400 people signed a petition in support of the cause, demanding that adjuncts be paid at least $2,000 per credit hour, or over double what they are paid now.

“There are some adjuncts right now who are one emergency away from being homeless,” said Heide Trepanier, 48, former art adjunct in the Department of Paint and Printmaking.

The majority of rally attendees were students. According to Trepanier and a recording of a meeting with VCUarts chair people, legal counsel advised that adjunct professors who canceled their Friday morning classes to be at the rally or brought their students to the rally should be fired.

“I think with student involvement, more people can know about it and the cause can spread throughout the university quicker than if it was just adjunct faculty talking about it,” Eric Eckhart said, a VCUarts freshman. “I feel like if adjuncts feel comfortable knowing they can survive in Richmond, then they are far more capable to teach the classes that they have been given to teach.”

As of now, adjunct professors at VCU earn less than half of the average rent cost in Richmond per month. Currently around 120 adjuncts in the School of Arts teach over 60 percent of all classes in what is ranked as the number one public arts school in the country, each earning between $750 and $900 per credit hour without benefits. Since the number of classes an adjunct may teach is capped at two or three per semester, their yearly wages are around $15,000, or just above the federal poverty line, according to the U.S. Census Bureau.

“You’ve got adjuncts who in order to survive are working at two and three different colleges,” Trepanier said. “They’re worn out, they’re tired, they’re broke, and you want to give your students the best education possible, but you can’t necessarily do that if you don’t have the resources to get the materials that you need, or the time to research to give a quality lecture to your students.”

A group of VCUarts adjuncts formed the organization, “VCUarts Adjuncts Organizing for Fair Pay” and sent letters with their demands to VCU President Michael Rao’s office, as well as to VCUarts Dean Shawn Brixey.

“Adjunct faculty currently account for the majority of instructors in the VCUarts departments, yet are still paid significantly lower than other top-rated public universities in Virginia,” the letter to Rao stated. “The University is sending a clear message to us, and the public about the value of its educators by underpaying adjuncts despite consistently increasing tuition.” 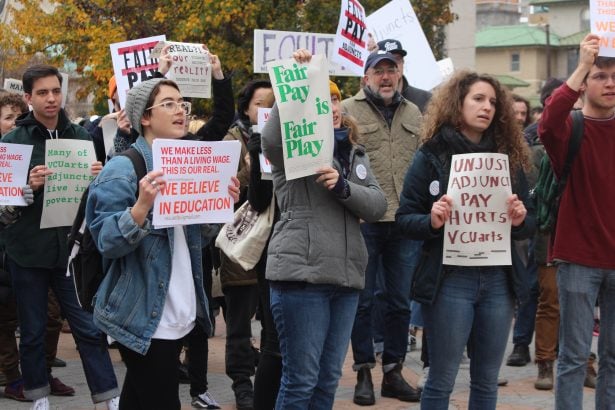 In response, Rao cited shortfalls in the budget as to why the minimum salary for adjuncts would be raised only to $1,000 per credit hour. According to Trepanier, Brixey stated in a meeting with adjuncts that to raise wages, student tuition must to rise. In a separate meeting between VCUarts legal counsel and chairpeople, it was suggested adjunct wage raises would have to come out of full-time faculty’s research budget.

“There are departments who spend hundreds of thousands of dollars on equipment they don’t use,” Trepanier said. “If they just had some oversight and they just lowered the amount of administration, VCU could pay a decent wage to their faculty.”

The imbalance between adjunct and full-time faculty affects multiple schools within VCU, including the Robertson School of Media and Culture, who recently found issue with their faculty ratio after undergoing the re-accreditation process.

University accreditation is the official process by which universities and colleges are recognized as being qualified to grant degrees. Robertson school recently took part in the voluntary process to become re-accredited by the Accrediting Council on Education in Journalism and Mass Communications (ACEJMC).

ACEJMC has nine accrediting standards, only two of which Robertson school did not fulfill at the time of the site visit, in which professional representatives from ACEJMC visited Robertson school to conduct an examination after Robertson’s detailed, 300-page self-evaluation. The school has several months to correct any issues before accreditation is granted or denied, one of which is having over 50 percent of all classes at Robertson taught by adjunct professors. 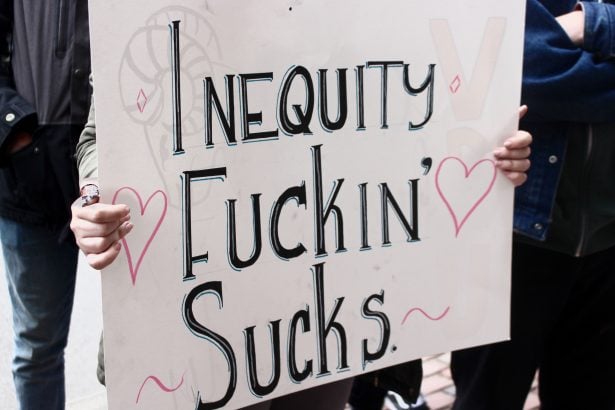 “There are limited resources for higher education,” said Hong Chen, professor, and Robertson School director. “Then the university probably does not have enough funding for full-time faculty professors. After the site visit, the university immediately worked together to provide new faculty positions for us.”

According to Chen, Rao created room in VCU’s budget to provide extra full-time positions in Robertson after a private meeting with representatives from ACEJMC. Tim Bajkiewicz, professor and Robertson School associate director, also noted that historically, ensuring funds for a large number of full-time faculty is a struggle for all universities.

VCUarts has a similar requirement within their accreditation process with the National Association of Schools of Art and Design (NASAD), but is not scheduled to have another comprehensive review until 2025, according to the NASAD database.

“The artists that teach absolutely love teaching, but the arts don’t bring in any money,” Trepanier said. “Sometimes the only money [artists] are making per year is this adjunct money… So when they don’t pay their faculty a decent living wage, what they’re doing is starving them out of these positions.”

Trepanier also observed that unless VCU is able to increase adjunct pay and faculty ratio, VCUarts could lose their high ranking as U.S. News and World Report is likely to begin including adjunct pay rates into their ranking standards

“A good school can’t pay their teachers less than poverty wages and offer their students a good education,” Trepanier said.

Storefront for Community Design wants you to be their neighbor.
END_OF_DOCUMENT_TOKEN_TO_BE_REPLACED