On a chilly Valentine’s Day morning, protesters gathered outside of the Governor’s office to oppose the Atlantic Coast and Mountain Valley Pipelines. While there were only seven in attendance, they carried with them dozens of letters from those who oppose the pipelines, but were unable to travel to the capitol or take time off work.

Stacy Lovelace, co-organizer of the protest with Jessica Sims, addressed Northam directly in her opening remarks. ”Governor Northam has said he’d wait for the science. Well, the science has long confirmed that these pipelines are terrible,” Lovelace said. “Governor Northam has said that he backs the pipelines as long as they’re done responsibly and people’s land rights are taken into account. It’s obvious that this is not the case, that property rights are being trampled as well as the land, air quality, and water,  and that the [Department of Environmental Quality] and other state agencies have rubber stamped this process in the most irresponsible way possible.” 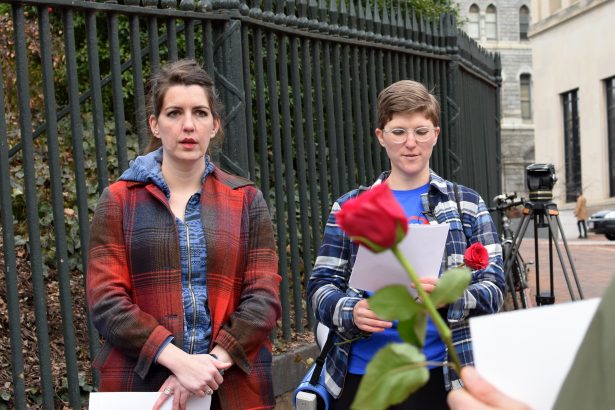 “I don’t know about y’all, but I’m tired of being insulted by this governor with ridiculous statements like these,” Lovelace went on to say.

After the remarks, the group chanted and sang, before delivering a sachet of postcards and a letter, which asked the governor to take several concrete steps. They asked that construction preparations and the felling of trees cease until the state has finished its certification process for the pipeline. Along two sections of pipeline, construction workers have already begun clearing sites.

They demanded that he bolster his opposition to offshore oil drilling by also opposing fracking. One protester pointed out the basic hypocrisy of opposing offshore drilling when it affects his own tidewater backyard, but supporting fracking which threatens the water wells, air quality, and backyards of the rest of Virginia.

They also demanded that Northam rescind a secret agreement reached between ACP and the McAuliffe administration. The Memorandum of Understanding was signed in December, but only discovered after North Carolina announced they’d made a similar agreement. Under the memo, the pipeline companies agree to pay $57,850,000 for mitigation of unavoidable damage to the state’s water and forests. In return, critics say, the state has provided ACP with a liability shield that protects them from lawsuits.

Writing at Blue Virginia, environmental activist and lawyer Jon Sokolow accused the state of allowing Dominion Power to “buy their way out” of paying for damages caused by the pipeline.

“Terry McAuliffe gave Dominion a full and complete release from any and all damage to Virginia’s forests and water from the Atlantic Coast Pipeline,” he wrote.

Sokolow argues that North Carolina’s memo creates greater protections than Virginia’s because North Carolina reserved the right to sue pipeline operators for damages, while Virginia’s agreement does not.

As we’ve reported before, people in vulnerable rural communities are losing their livelihoods and homes to this pipeline. Under this memorandum, their communities could be devastated by a leak or spill, and have no legal recourse to sue for damages. Critics say that it’s no longer just the people directly in the path of the pipeline who are now in danger, but every community nearby or downriver. 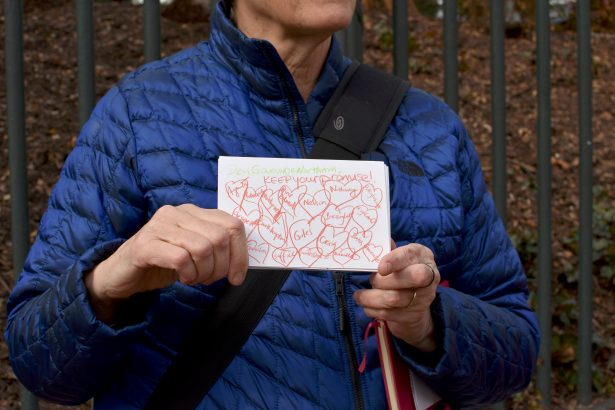 Though small in number, the protesters sought to magnify the voices of those very communities. The letters they brought with them bore names and addresses from across the commonwealth. And they’re concerned about communities beyond their own, and beyond Virginia. Flint, Michigan and the threat the Dakota Access pipeline raised to native communities both weighed heavily on the minds of the protesters.

In her opening remarks, co-organizer Stacy Lovelace reminded the protesters that the land being stolen to build the pipelines “was stolen once before, from the indigenous peoples of those lands.” 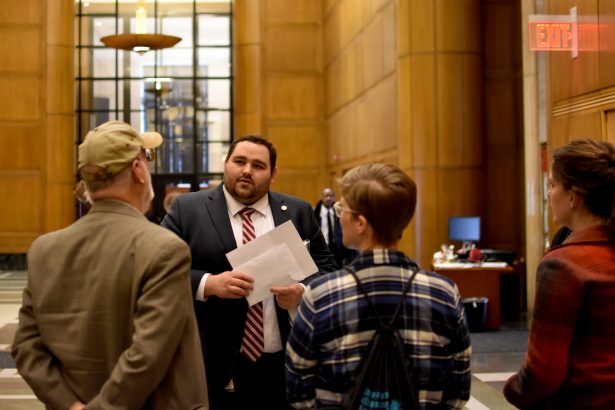 Asked how long the protests would continue, Lovelace was blunt. “Until our demands are met, we’re not going away until the pipelines do.”

The protesters will reassemble on Wed., Feb. 28, at 10 AM behind the Governor’s office, and have said that their weekly protest will continue indefinitely until their demands are met.

This story has been corrected. Lovelace’s quote was attributed to Sims and Jon Sokolow and Governor McAuliffe’s names were misspelled, and the lede was updated to add the Mountain Valley Pipeline.