The old cliché, one man’s trash is another man’s treasure, rings true in the work of Jamie Phillips, who uses discarded objects and refuse to create meticulous assemblage pieces. On display through June 9 at Visual Art Studio on West Broad Street, the Virginia Beach artist’s exhibit, “Urban Assemblages,” is a collection of 17 works, inspired by various cities he’s lived in or visited.

Philips said he’s always been a traveler, even at an early age. “Both my parents were artists and I grew up in a very creative family. I was exposed to things at an early age that people in a small town were not exposed to, poets, musicians, all different types of people. I mean from race car drivers to doctors, lawyers, and an Indian chief,” said Phillips.

Like many artists, he was a precocious child, and the adults in his life treated him like an equal. “They didn’t treat me like a kid, they let me participate. It wasn’t just artists that really inspired me. Anyone who was good in their career was a real turn on to me. Just learning from them and visiting their homes if they weren’t artists or visiting their studios just seeing how they work,” he said.

The strong influences in his life led him to pursue art as a career during the freewheeling 1960s, but he didn’t thrive in art school. “I pretty much did a double major in advertising and teaching because I wanted something practical to be able to fall back on,” Philips said of his time at the Pratt Institute and the Philadelphia College of Art. “I attended the schools but didn’t graduate. Quite honestly, I got really bored in school. I just wasn’t a real education type.”

His real education came from mentors he met in his travels. He said, “I pretty much apprenticed myself to other artists either in Philly or New York living there.”

His biggest influence was the collage work of Louise Nevelson, an artist in New York City. “At the time she lived in the village, which is not Soho, but she would collect things off the street and build these walls like monochromatic doors and I just thought that was amazing. I went to one of her shows and she was very nice to me and I would never forget that,” he said. 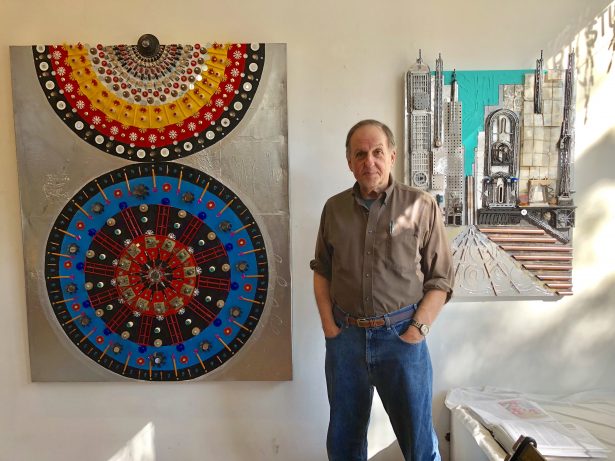 Another inspiring moment came during a studio visit to famed photographer Irving Penn, his father’s college roommate. “When I was 19 or 20 I got to visit his studio in New York as a student and he was very kind to me… I asked him what his next project was going to be and he turned to me seriously and pointed to his studio, a wooden floor, and he said ‘Jamie, I could spend a year photographing my floor.’ I will never forget that I walked out of there with my head in the air like, how do you spend a year photographing a floor?”

Naturally, he was also inspired by his father, although the two worked in different media. “My dad worked in flat images or in oil, occasionally in watercolor. Working in 3D was something I picked up on my own,” Phillips said. He created his first assemblage at the age of 19 but has repurposed materials throughout his life.

“Growing up in an artist family, we didn’t have any money. My dad made me a tugboat one time and I still have it. We’d create our own dollhouses. I made an apartment building,” he said, adding, “It was a good thing. You really appreciate where you are now.”

It’s become a way of life for the artist, who said his friends constantly drop things off at his house now; TVs, radios, almost anything they don’t need or want anymore that once had a use. He’s a thrifter and seeks out yard sales, but focuses on things that other people might overlook.

Despite his promising beginning in the arts, Phillips took a hiatus of over 30 years in 1968, after getting married. “I devoted myself to sales, starting companies and raising four kids,” he said. “It wasn’t until my mother died in 1987 that I really got back into art. I inherited a lot of their studio and I had my first show in Lancaster, Pennsylvania, at a small gallery.”

With his own long-list of mentors and influences, Phillips said he loves meeting students and talking about process and art. He fondly recalled a recent interaction where one young student said, “You’re still being creative at this age, I hope I am,” and he replied, “I know you will be, just stay inspired.” 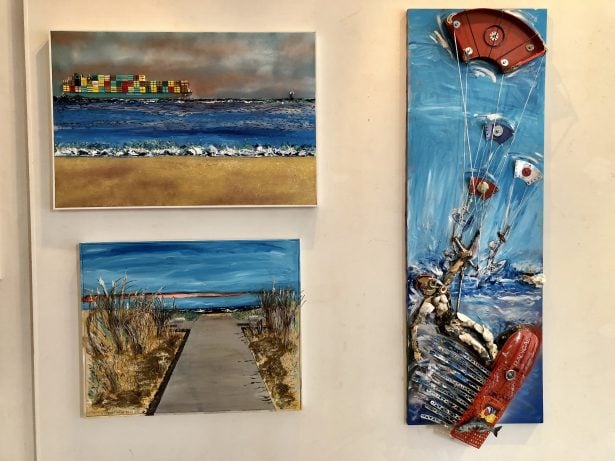 He summarized some of the advice he gives students. He tells them, “There are so few people that make it to the big time. The A game is your art, the B game is your backup to support your habit. And just pace yourself. It’s not gonna happen overnight. It’s the ones who continue to plug at it that reach success. When you do get a break just celebrate it. Use your time productively.”

Many of the pieces on display reflect time spent in New York City, but lately, his work reflects his surroundings in Virginia Beach. As much as he’s been influenced by people, it’s locations that shape his art, too. He said, “Right now I live by the beach and I walk by the ocean twice a day and that inspires me. The newest pieces I’m working on, I collected a bunch of gallons of sand that I plan to mix into my paint and use it with a palette knife. And I’ve never done that before but that’s how I’m experimenting, mixing my sand and acrylic paint and adding a retarding agent.”

That type of experiment is maybe the most constant aspect of his work. “I went from the wood glues and the oil paints to acrylics and epoxy glue. I work wet, and I work on multiple pieces at a time. When working with the epoxy glues and 3D objects they’ll only set so fast. The most important thing I learned was to know when to stop don’t overwork and learn to stop and let it set,” Phillips said.

Smaller pieces take as little as three days, while larger works can occupy weeks of on and off-again attention. He likes to give himself time for reflection, he said, but still keeps up a demanding pace, actively working on three pieces all the time. “I never get bored,” he said about the process.

Semi-retired from the nine to five world, Phillips devotes his days and nights to art, experimenting in a variety of mediums. Even in bed, he keeps a sketchbook for late night doodling when he can’t sleep. He’ll also use photography as a sketching aid before beginning work on a new collage. “I love sketching models. Unless you understand the anatomy of the model you can’t do a good sketch. Unless you understand how a building is built you can’t do a good collage.”

Phillips has rich memories from his long life in the arts, and very little regrets, although he does wish some of the people in his life were able to see his new work. “I wish my artist parents and late brother Steve were still around to see my new collages. They were so much a part of my growing up years and beyond,” he said. His memories and the influences of his parents come through, vibrant and alive, in this show.

The Visual Art Studio at 208 W. Broad St will be showing “Urban Assemblages” through June 9.

A truth we hold to be self-evident: art makes everything better. And we need plenty of art right now, because these long, hot days of late summer are stultifying.
END_OF_DOCUMENT_TOKEN_TO_BE_REPLACED

It’s the last First Friday Art Walk of the school year, and all the students are worrying about exams, but for all of us who’ve seen the inside of a classroom for the last time, it’s smooth sailing.
END_OF_DOCUMENT_TOKEN_TO_BE_REPLACED

First Friday has rolled around once again, and once again, I find myself contemplating the weather. And let me just say that, no matter how much stock you put in this whole “polar vortex” thing, I can tell you for sure that it’s been way too cold in RVA this winter.
END_OF_DOCUMENT_TOKEN_TO_BE_REPLACED